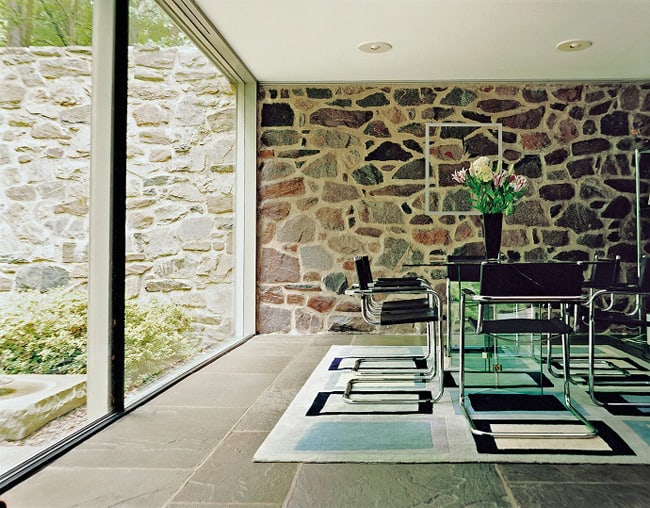 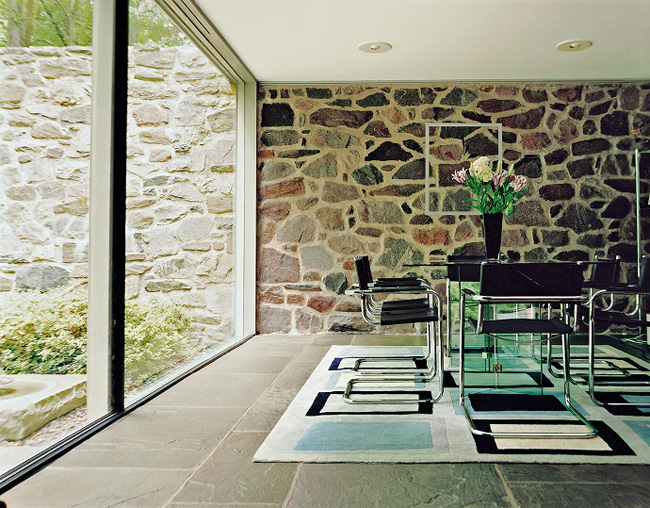 above: Hooper House by Marcel Breuer featured in Dwell

The world was shocked by the simple, industrial style that came out of the Bauhaus design school in the 1930s. Coming fresh off the heals of the arts and crafts movement where simplicity and craftsmanship were key, designers in the modern German design school believed form should follow function. Furniture designs of tubular steel and glass were created to be mass produced and easily affordable, without the fuss of superfluous decoration.

Due to the political oppression in Germany and Austria (home of the famous Weiner Werkstätte), the Bauhaus closed and prolific designers were scattered across Europe, some fleeing to the U.S. for a chance to successfully produce work in their new style. This prompted the birth of new design schools like Black Mountain College in North Carolina and Cranbrook Academy of Art in Michigan. The early 1930s began to see collaborations between designers who would become world famous for their iconic furniture designs, architectural endeavors, and even the creation of a groundbreaking design style called International Style. The new look was marked by buildings with large expanses of glass windows, tubular steel frames for furnishings, sleek materials like leather, steel and plastic, as well as generally sparse decorations. Though this modern style movement began in the 1930s, it wasn’t until the 1940s that it began to become more widely accepted by the typical American home owner.

above: the Gropius house from the Historic New England Properties photographic collection and Martha Stewart Living 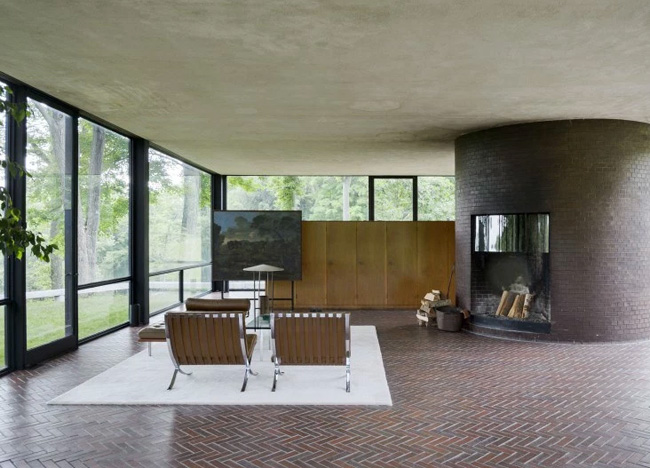 The above space is a room in the Glass House retreat of Philip Johnson, which really is one wide-open space with glass walls to create a sense of oneness with nature. The large panes of glass, boxy design and minimalist furnishings make this space a great example of International design. Similar styles can be seen in other works by Philip Johnson as well as in the work of his mentors, friends and collaborators such as Mie van der Rohe (whose Barcelona chairs are pictured above), Le Corbusier, Walter Gropius (founder of the Bauhaus, whose home is shown above this one), Marcel Breuer and even Frank Lloyd Wright. 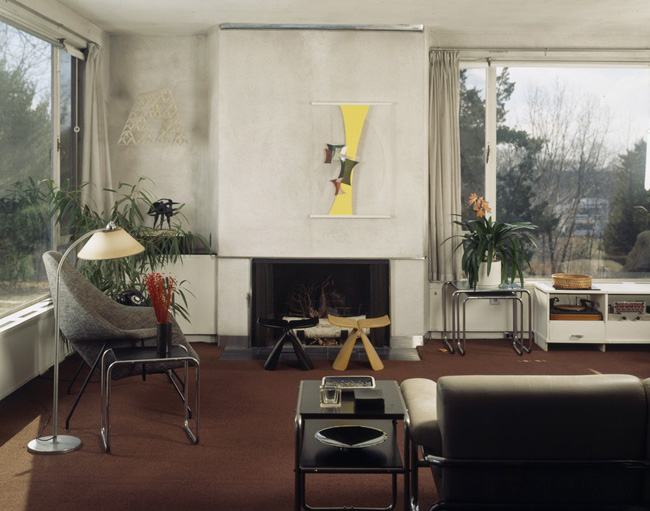 above: the home of Walter Gropius from the Historic New England Properties photographic collection

If you’re not into modern architecture, an easy way to grasp the style of the Bauhaus and International Style movements is to take a look at the furnishings that came out of this movement. Many of the iconic modern pieces you see in design magazines these days were created by architects and designers from this period of design history. Above left you can see the Barcelona chairs and tables as designed by Mies van der Rohe, and in the image to the right you can see a bent tubular steel chair design by Mies van der Rohe, who was also famous for utilizing a new cantilever style with his MR10 chair design pictured below. Marcel Breuer created his own version too, which became extremely popular with interior stylists in the 1970s. In general, the minimalist furniture designs of the International Style movement most often utilize materials like tubular steel, leather and glass, but you can find softened versions with the introduction of rattan and wood, as seen in both van der Rohe and Breuer’s famous chairs below.

You can buy new licensed versions of famous Bauhaus and International furniture designs at stores like Design Within Reach, or you can troll Craigslist and eBay for vintage versions. Usually they’ll be pretty pricey, but sometimes a seller doesn’t know the value of what they’re listing and you’ll stumble on a deal.

Here are some classics from the Bauhaus and International Style movements available at DWR: 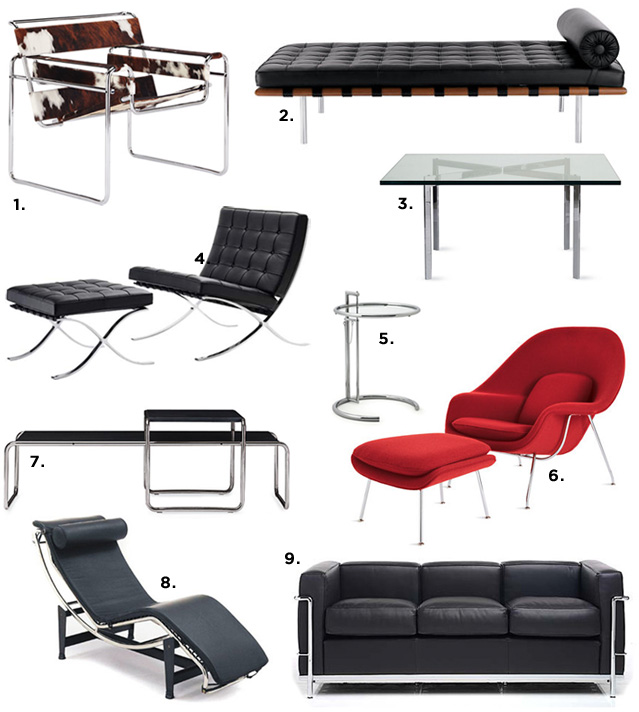 Even within the utilitarian design mindset of the Bauhaus, you can find softer styles that work well to soften the hardness of the steel and minimalist International Style designs. Though still modernist and simple in nature, the art and textile designs that came from Bauhaus students help make a cold environment much softer and cozier. 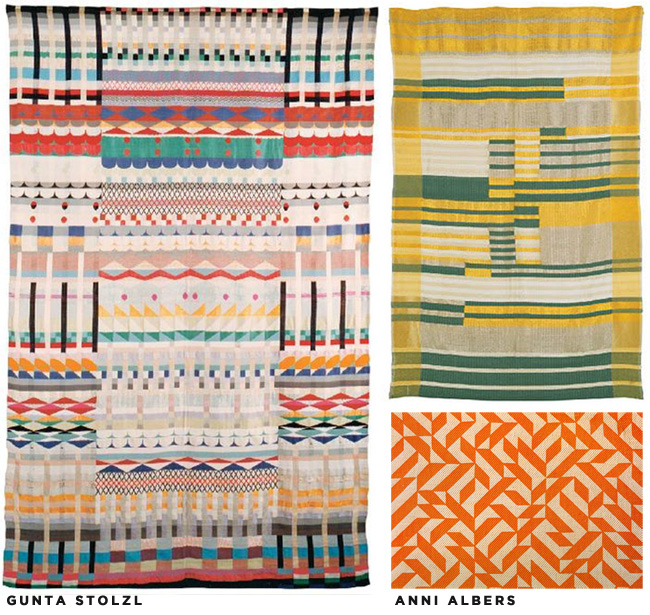 Gunta Stölzl and Anni Albers  (work shown above) are two of my favorite textile designers that came from the Bauhaus, and Josef Albers (Annie’s husband) is definitely my favorite print maker— famous for his color studies in Interaction of Color as well as his print and type design, as shown below. 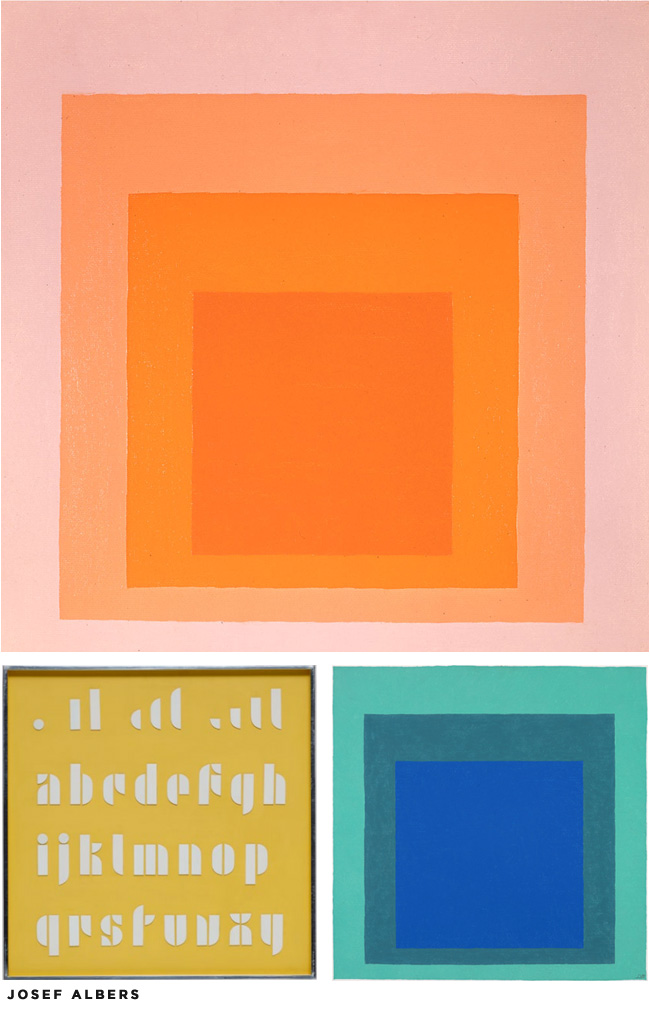 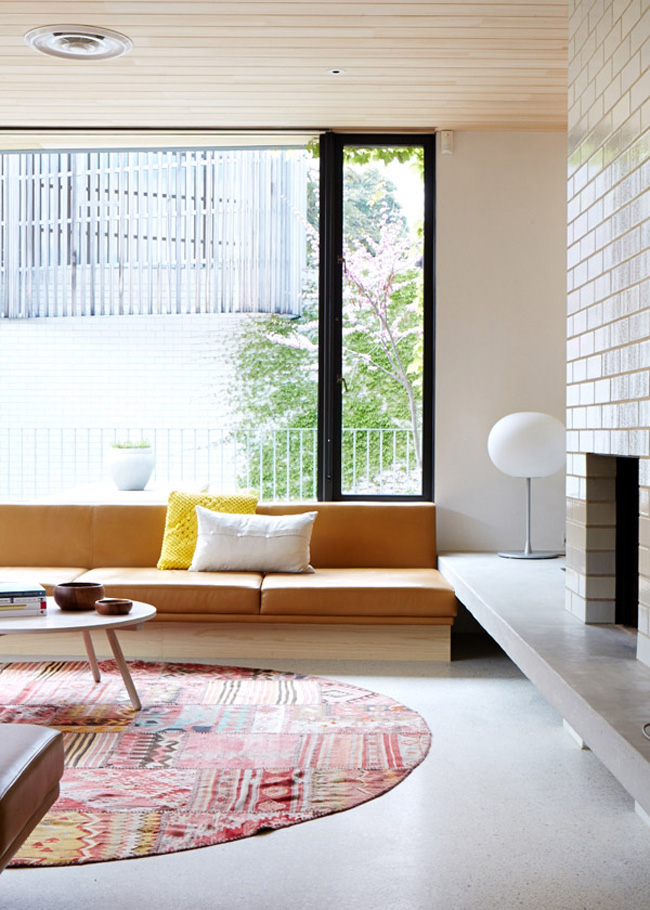 above: Sean Fennessy for The Design Files

Most of the time you won’t see a room full of cold, industrial-styled furniture, unless you’re looking at a masculine, high style apartment of a power broker or something like that. The colder minimalist designs that came from the Bauhaus and the International Style movement are usually seen mixed with warmer pieces that have soft textures or wooden surfaces. These homes show a more widely accessible interpretation of International Style—clean lines, sturdy materials and a functional arrangement without much fuss. The wood tones and textiles help to warm up the space.

Though it isn’t a contemporary space, the home of the Bauhaus founder, Walter Gropius, is a great example of a warm interpretation of International Style, thanks largely to the influence of his wife whose love for textiles softened the cold style of much of the home’s furnishings. (See the home in the below right image and elsewhere as noted in this post.) 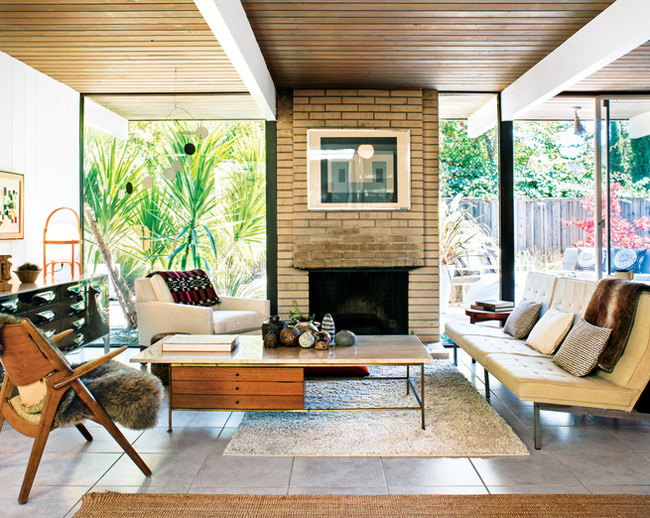 above: Drew Kelly for Dwell / below: Knoll Laccio table styling

I love the image below, found in a Sydney real estate listing. You’ll find tubular steel chairs, a poster design in a style you’d see come out of the Bauhaus school, and a color scheme that fits in perfect with the Bauhaus and International Styles as well—black, white, red and yellow. But the space is warmed up tremendously with a rustic farmhouse table, an antique side chair and cabinet, as well as a funky chandelier. Such a unique mix of styles that work well due to the simplicity of the room and color scheme. 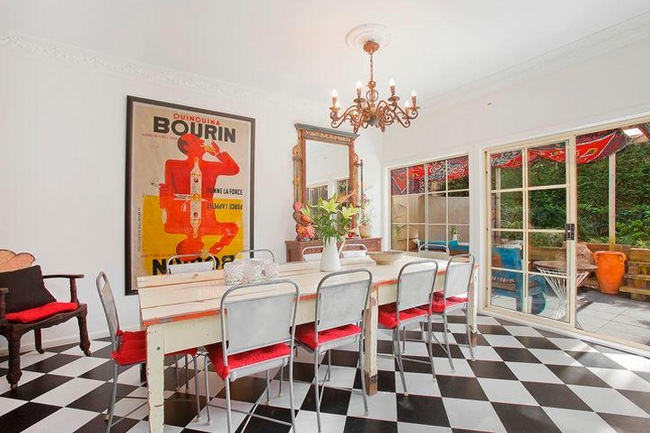 International Style encompasses a lot of modern designs that can work well alongside vintage and contemporary pieces, and it also flows really well into one of my favorite styles—Mid Century Modern. We’ll talk more about that soon! –Mandi

Those materials are excellent; they would truly assist with lighting up my home; I love them!

Those textiles are beautiful, they would really help to brighten up my home, love love love them!

Hi Sivan, I honestly had no idea Israel had a role in the International Style of design. I drew on what I learned in my university classes (two art history classes and two history of interior design classes), and it was never discussed in relation to International Style. I just looked it up and saw there is more I have to learn! There is, of course, so much more to say about this style and architects and designers who contributed to its development, but it’s far too much to share here in this blog post. This post was more just meant to gloss over the history briefly and share some inspiration people can use to decorate their own homes. But hopefully if people are interested, they’ll learn more on their own through books and such! 🙂 -Mandi

SUCH an influential style. where would we be today without it!

That style of furniture is so awesome!

I was just going over my architecture history notes from college a few weeks ago (I graduated with a B.Arch) because I was planning a trip to Israel, where the majority of Bauhaus style can be found. For some strange reason, I couldn’t remember my professor ever ever mentioning Israel in any discussion, and it seems to have been overlooked here as well. While I think your post is totally awesome and the photos are beautiful, I do think it’s important to discuss Israel’s role- since you’ve already touched on a brief history of the International Style. Just a thought- no offense intended!

Love this post! I`m studying architecture, so I`m really into this topic! Great combination between the history part and the “style your home” part 🙂

Please write more of these! Absolutely love this series! Could you please recommend books to learn more about this kind of design? Thank you so much for always being so inspiring

Really great inspiration, thank you 🙂
And have a lovely weekend 🙂

I have to say, I’m loving this new series on the history of different interior styles! Thanks for sharing. I’ve seen SO many beautiful things that fit under this umbrella (hello, Barcelona chair) but didn’t know what the term was.

This shed some light on a bizarre chair I acquired from my mom…I don’t know if it’s any particular designer, but it’s definitely the same design as the Mie van der Rohe and Breuer chairs! Thanks for the insight, great article!

I’m studying architecture at university, and am a huge fan of the international style. You should look into the furniture Charles and Ray Eames made, it’s amazing. Their house is beautiful too 🙂

Wonderful design with some outstanding pieces. But you’re right, it seems very cold when everything is brought together. Again, the key is mixture! I’ve always loved that arc lamp by the way.
https://www.makeandmess.com/

This is so beautiful! Thank you for sharing!

I absolutely love this series. Really awesome to get some clear history of design explained in well written articles. It is making a lot of bits of information I have in my head link up. Thank you!

I used to be all about the shabby chic, vintage, traditional kinds of styles, but I’ve been really getting into and liking more modern pieces lately! I can’t wait to see your post on mid century modern because that’s a style I feel I really gravitate toward!

Im pretty sure this is my husband’s dream design for our house.