Dumb & Dumber (Mommy and Me) Costume! 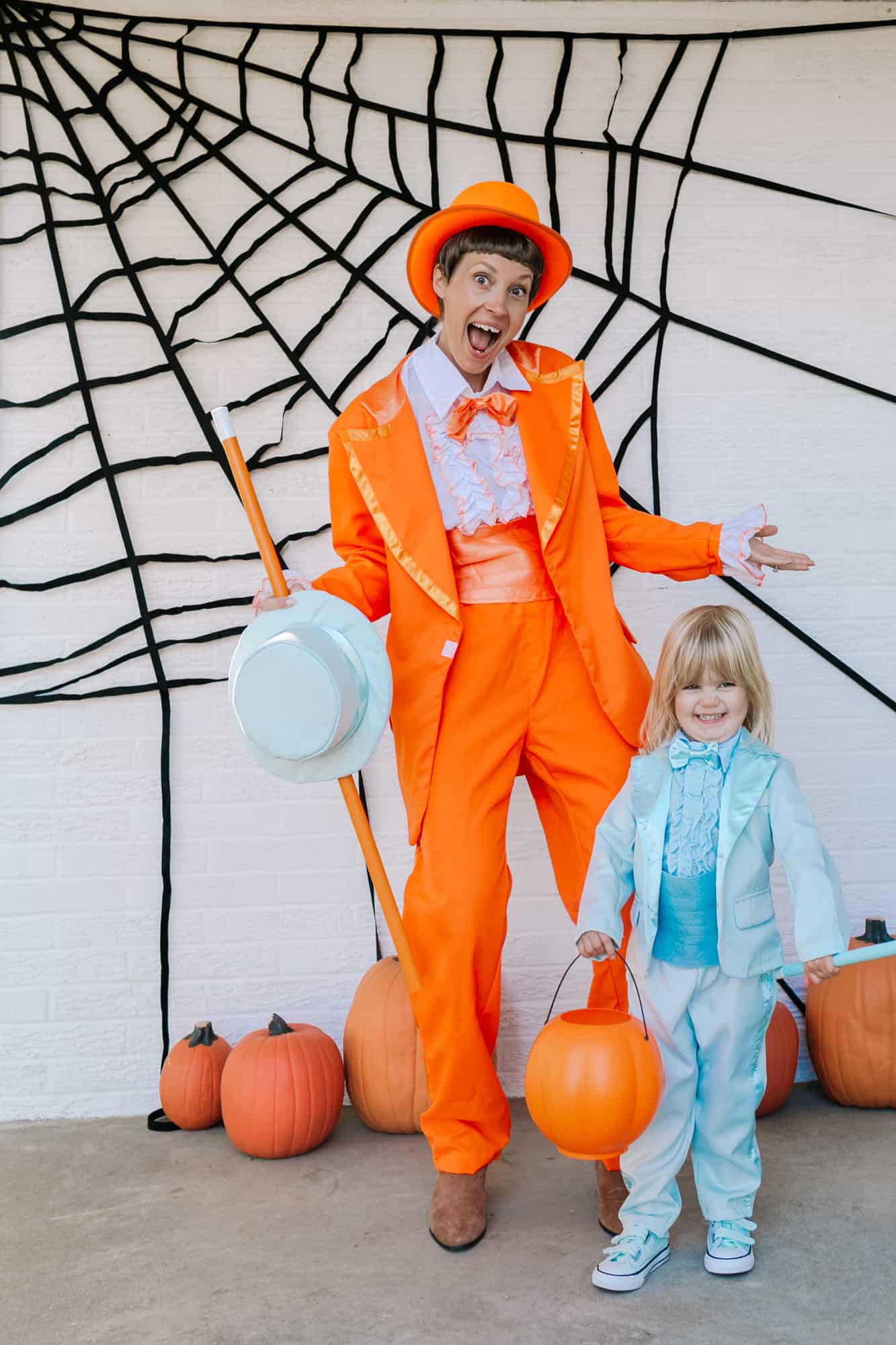 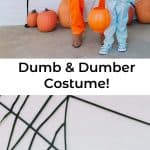 Hahaha, I bet you weren’t expecting this costume from me this year, but look how fun it is!! I literally couldn’t stop laughing the entire time we had them on … the whole thing is just too funny. It basically all started last year when I realized Lola’s oatmeal hair looked just like Harry Dunne’s mane and the idea has been rolling around in my head ever since!

Originally, we were going to do a full family costume with Todd as Lloyd and me as Mary, but when I saw how fun it looked to be in the tuxedos I told Todd I wanted to share the Lloyd costume instead because I had major FOMO about it—ha! He gets to be Lloyd on actual Halloween though, so he’ll get his turn … 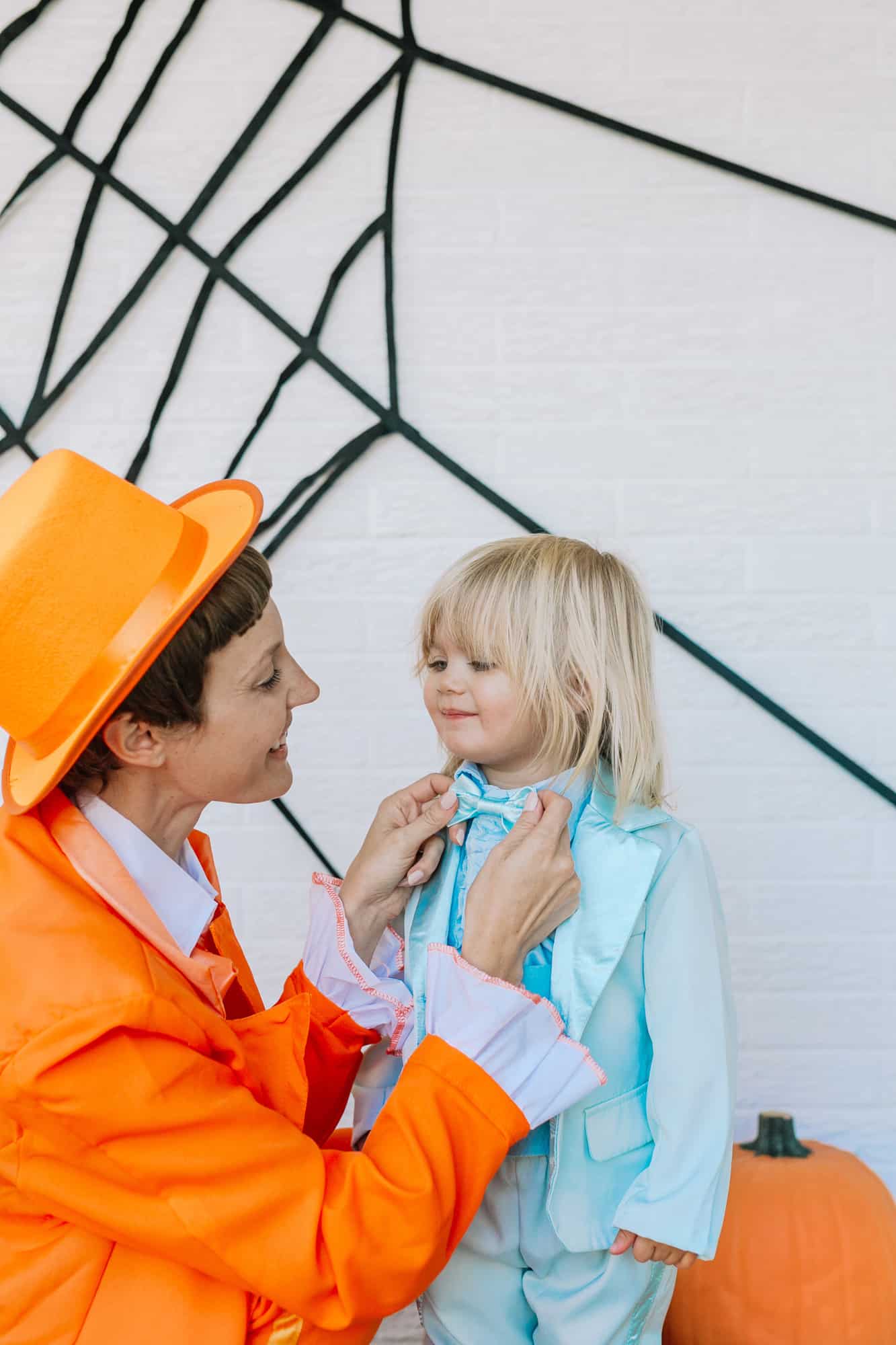 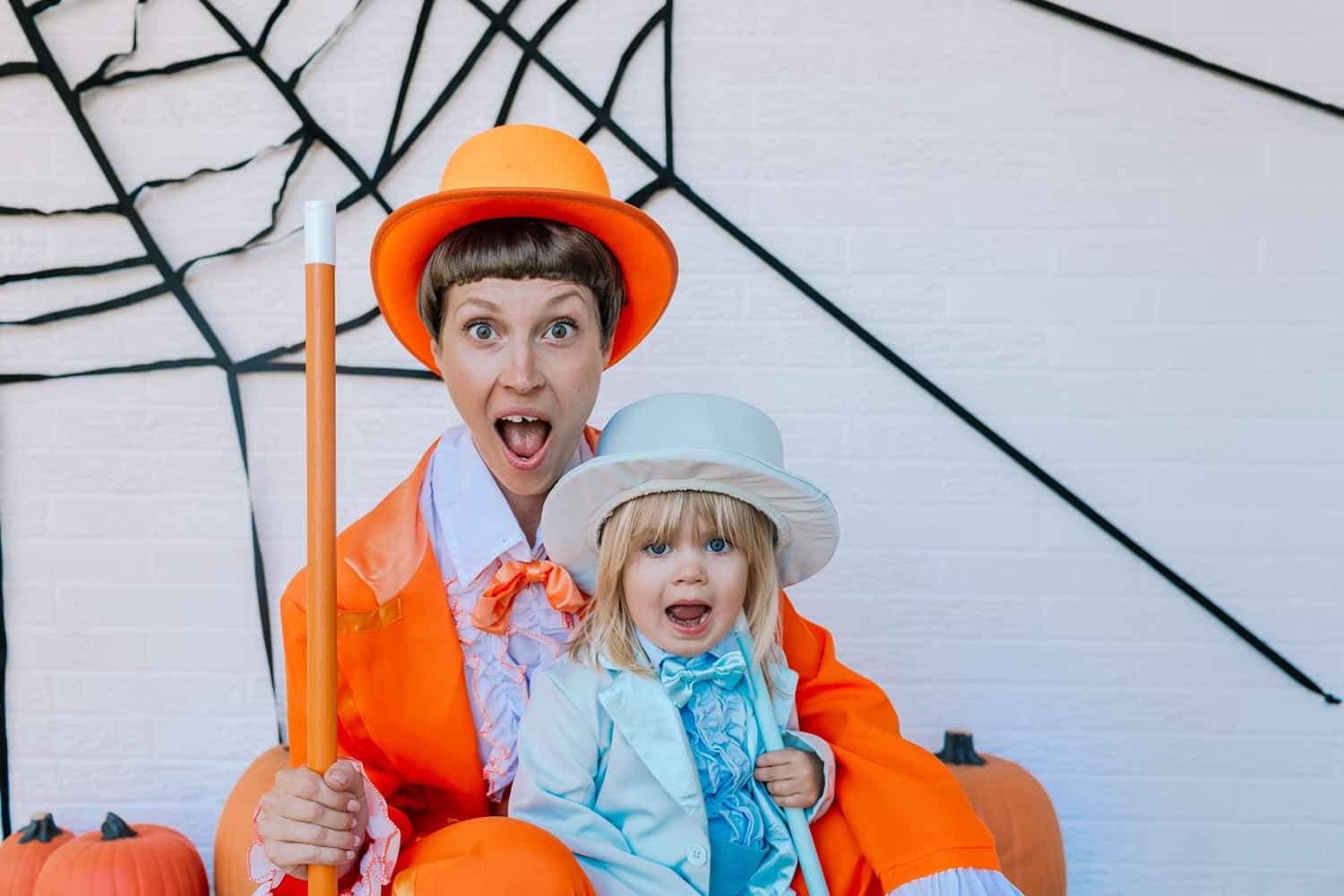 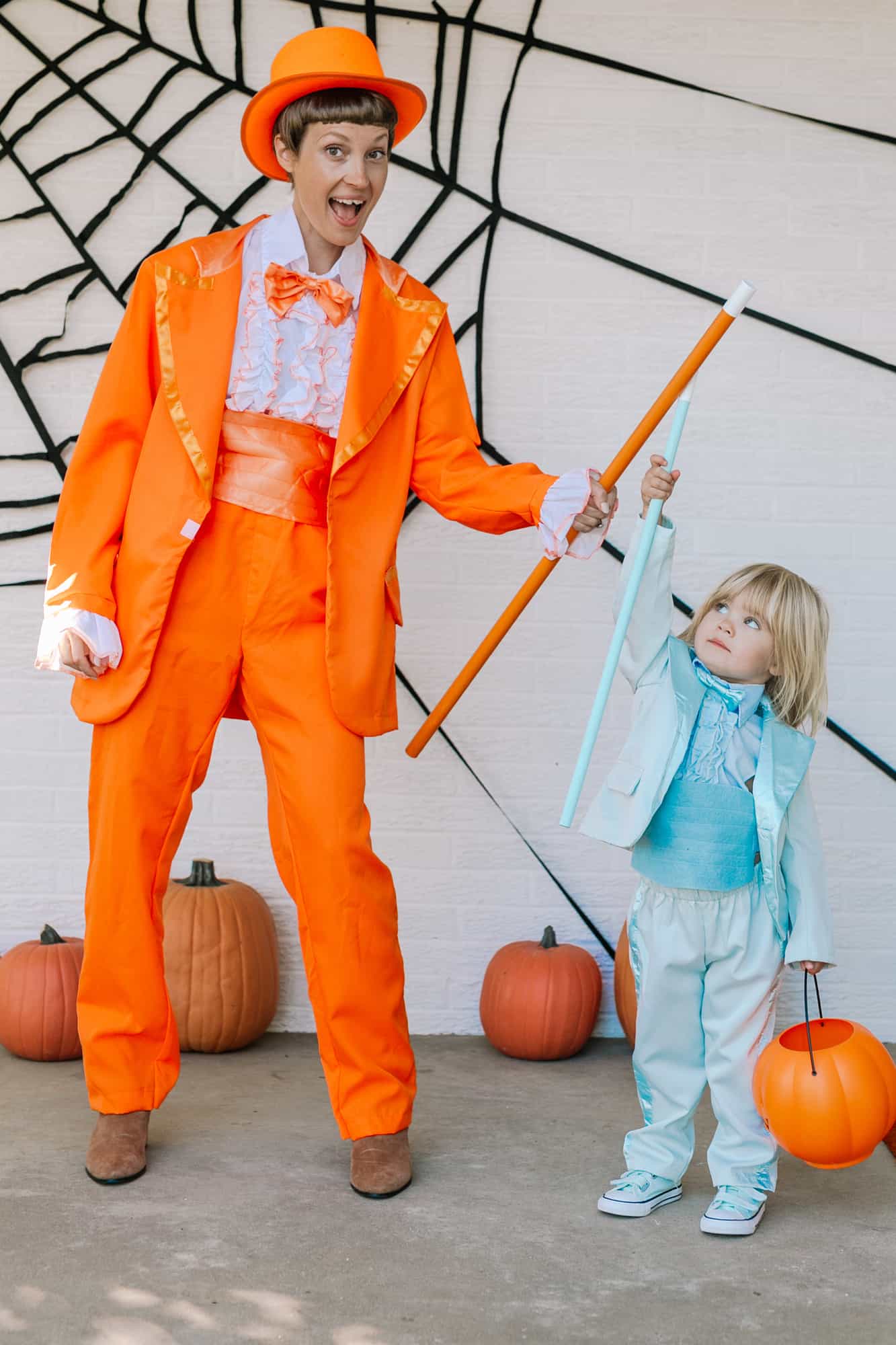 It’s always a gamble with babies or toddlers and costumes as you have NO IDEA if they will wear any part of their outfit. But this year Lola was immediately into the tuxedo and the cane and hat made her even more excited to wear her look. Although, I guess most kids will be happy if you give them a stick they can run around and hit things with!

The toddler Harry costume came with the shirt (it’s a dickey that just covers the front, so you’ll want a shirt underneath that if trick-or-treating in the cold), jacket, pants, and hat, and then I got shoes in the same color and made canes for us from dowel rods, paint, and white tape. I also took a piece of blue felt and sewed an elastic waistband on it to make a 2-minute cummerbund, but this would also be a great option! 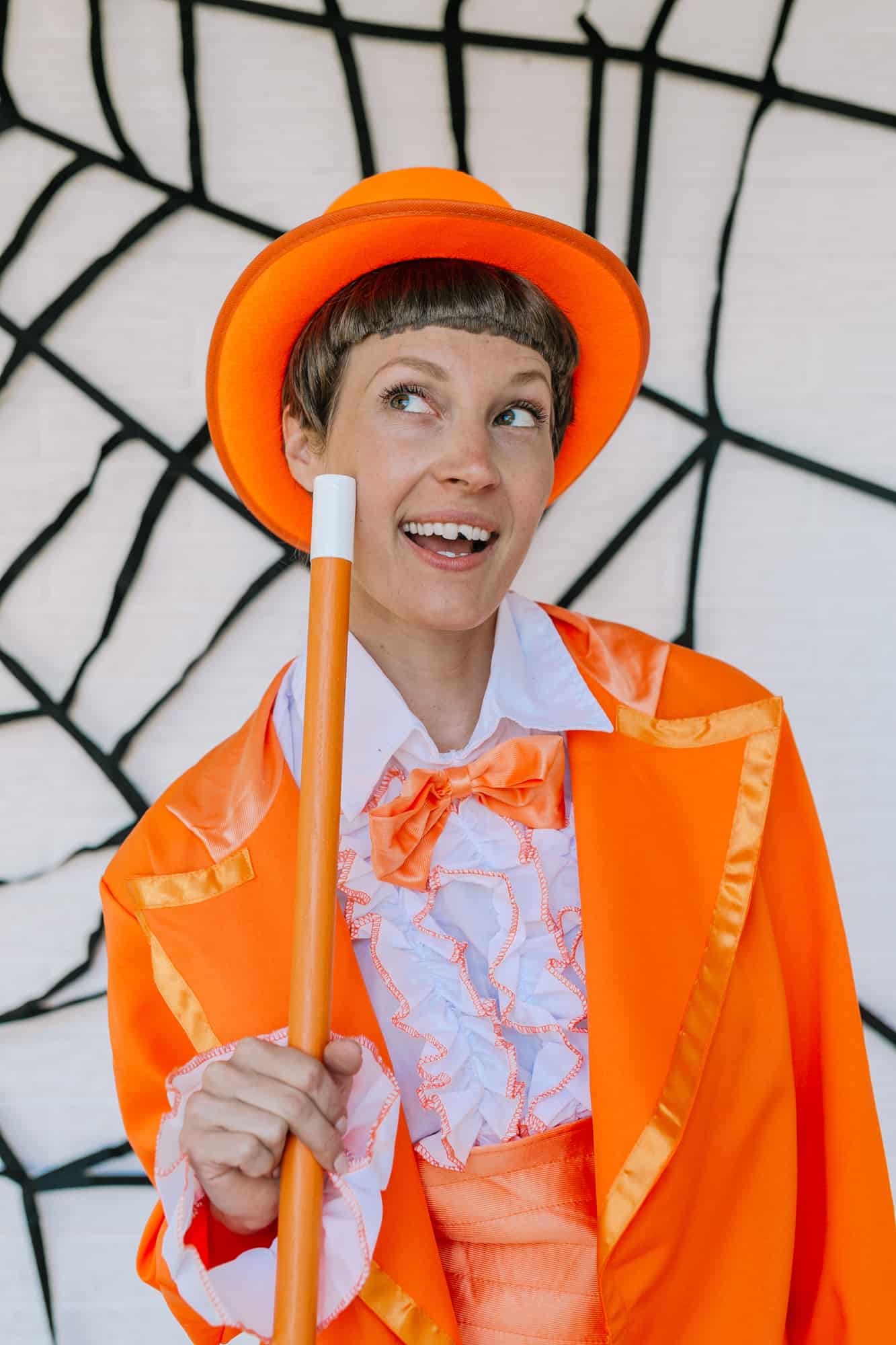 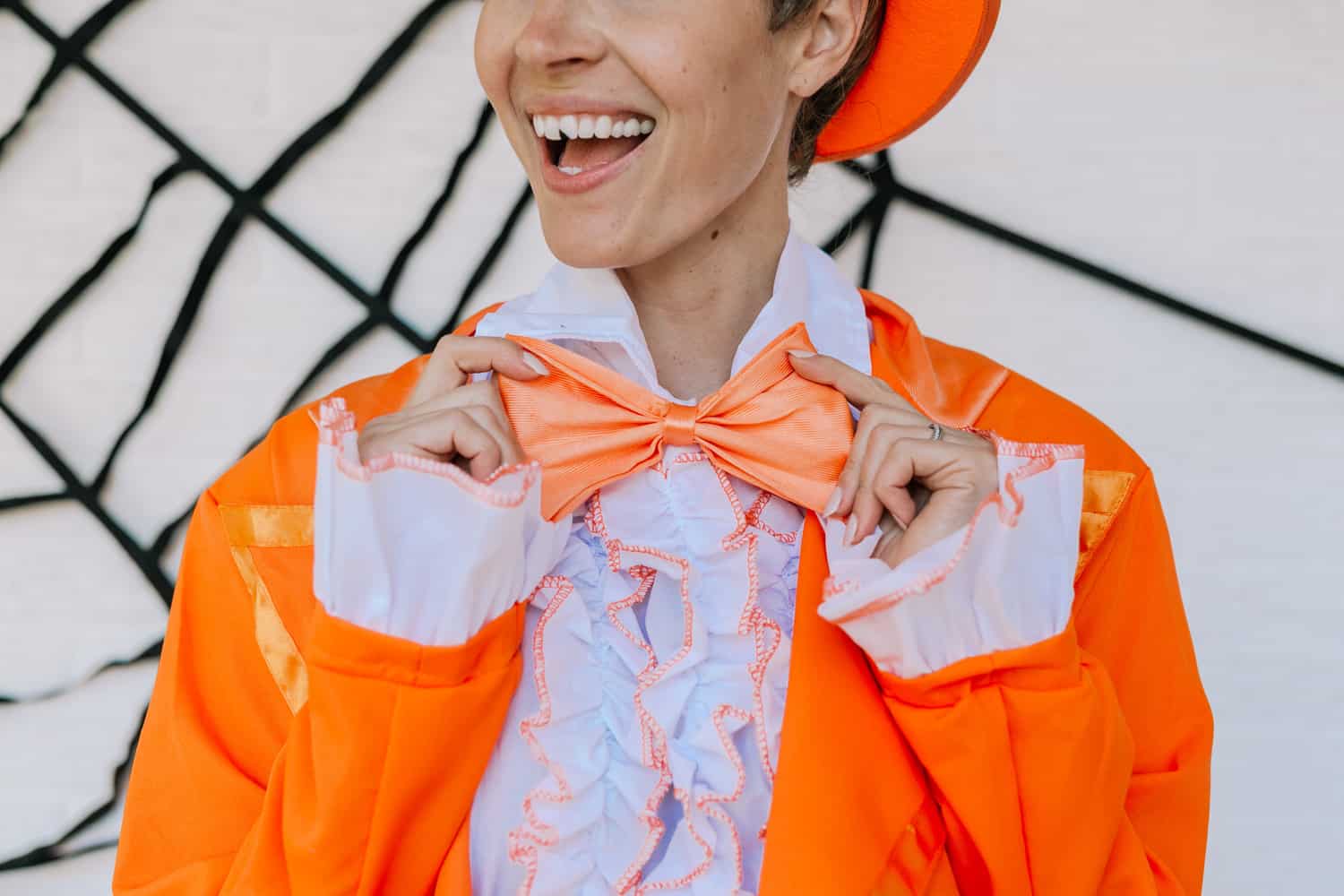 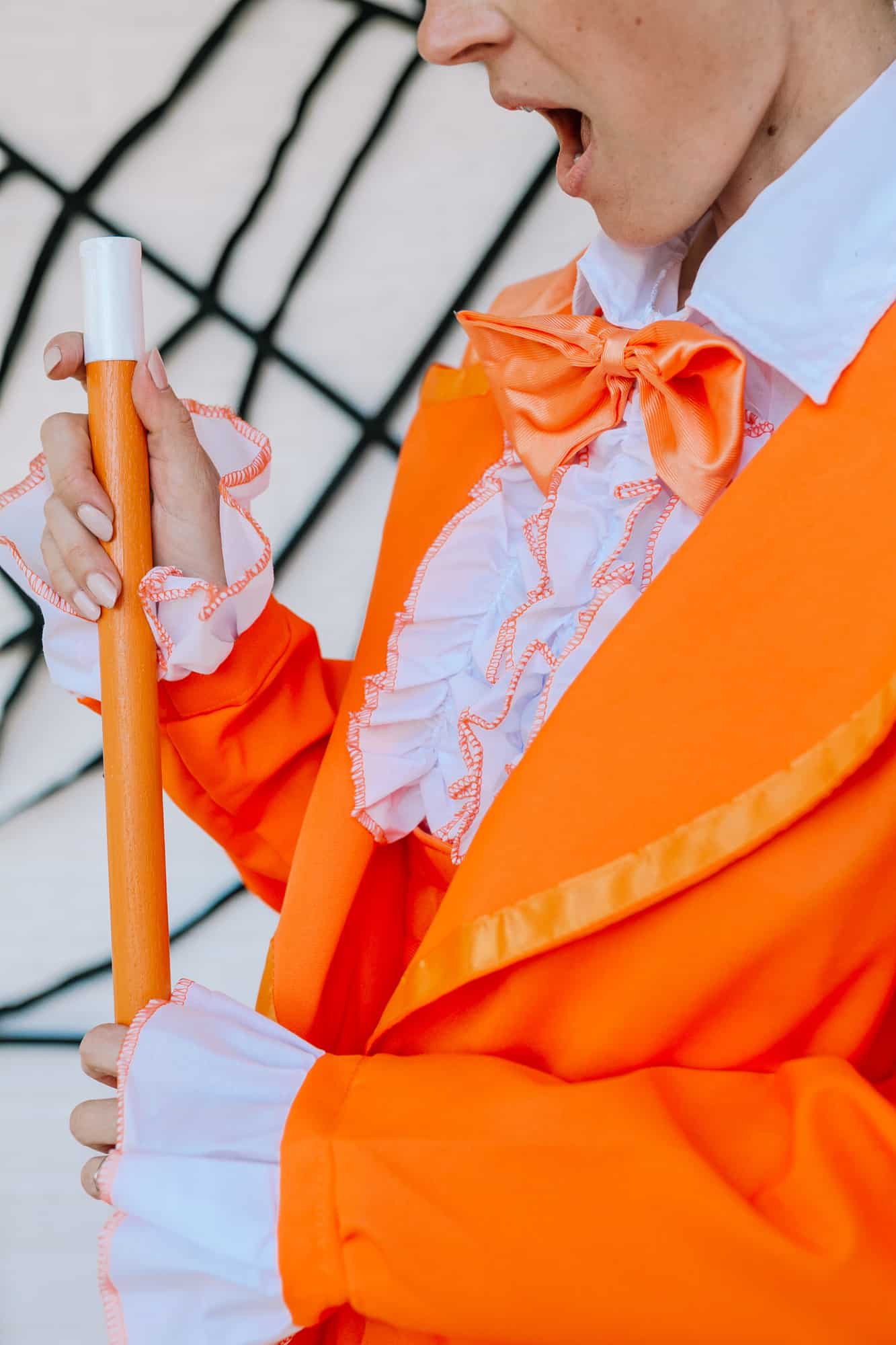 My Lloyd costume was a “one-size-fits-all,” so I had to take it in quite a bit to fit me and I got this hat instead, as it was a much better option than the soft foldable one that comes with the costume set. I couldn’t find a Lloyd wig that had good reviews, so I ended up getting this one and giving it a little bit of a haircut to make it look more like his—not too bad!

Also, you can’t be Lloyd without the chip in your tooth (which is actually Jim Carry’s real tooth in the movie with his tooth cap removed) so I used this tooth blackener and it worked really well! It seems like a small detail but that chipped tooth really makes the whole look and is 90% of why I couldn’t stop laughing when I looked in a mirror. 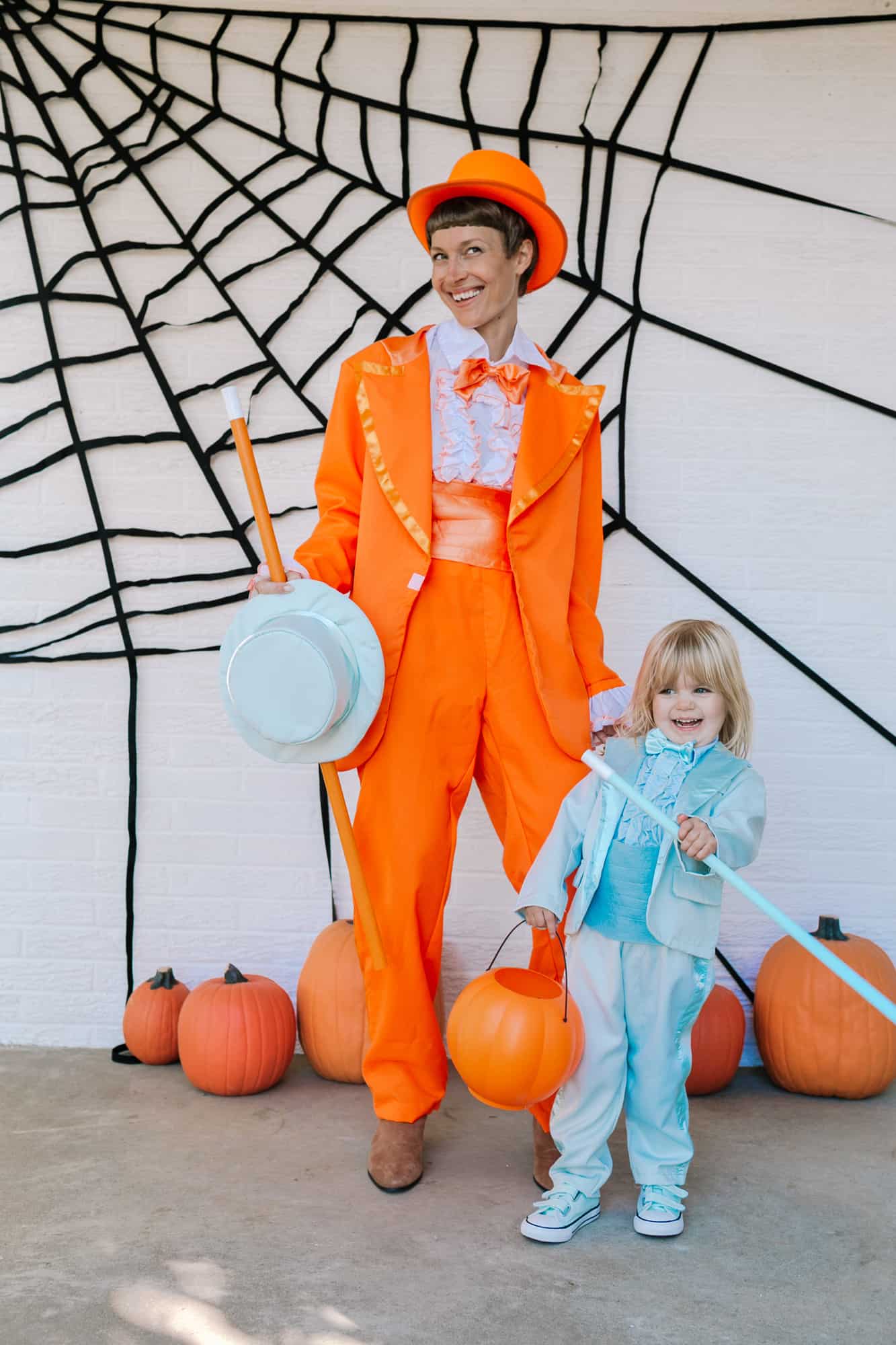 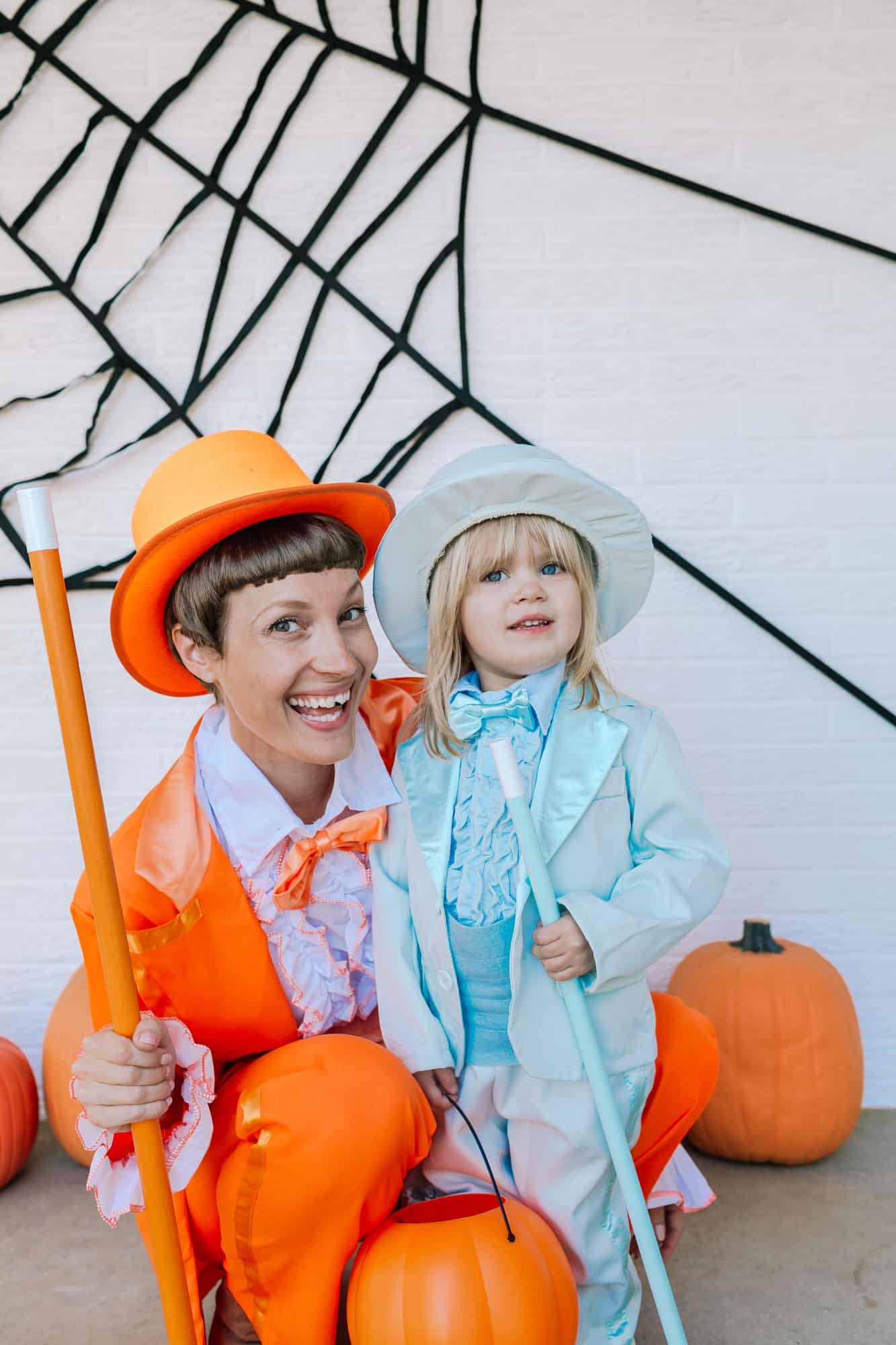 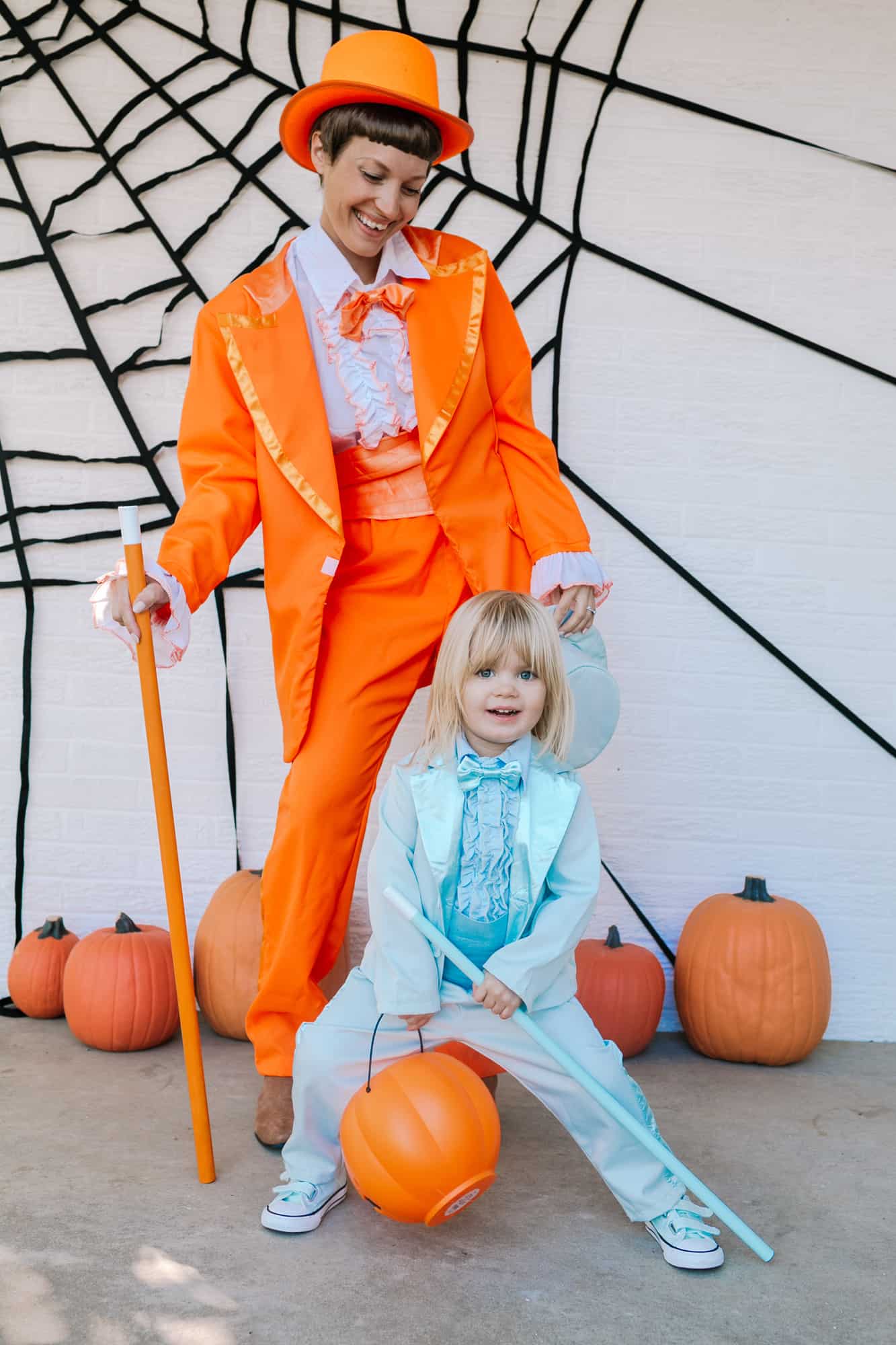 If you want to swap roles, here’s a kid’s Lloyd costume and the adult Harry costume if that fits your style better! I figured this was probably the last year of us picking Lola’s costume for her and she can decide on her own next year what she wants to be, so I thought we would make it a fun one (and I think we hit the mark)!

The real question is if she’ll want to do more family costumes in the future and I think she may. “So you’re telling me there’s a chance!” xo. Laura

I am dying, this is the best thing ever

I cannot get over the actual resemblance!!!! LOL Cutest ever!!

hahahahahahahahahahah this is the best costume EVER!
Me and a male friend planned to do this for our (non costume) formal work christmas event but he left before we got the chance!

I absolutely love this! haha too cute!!

this is the PERFECT companion to the wayne’s world costume. NAILED IT, LAURA.

Hahaha! Love it. Perfect for Halloween AND weddings!

HAHAHA! Yes, a wedding with this would be hilarious!