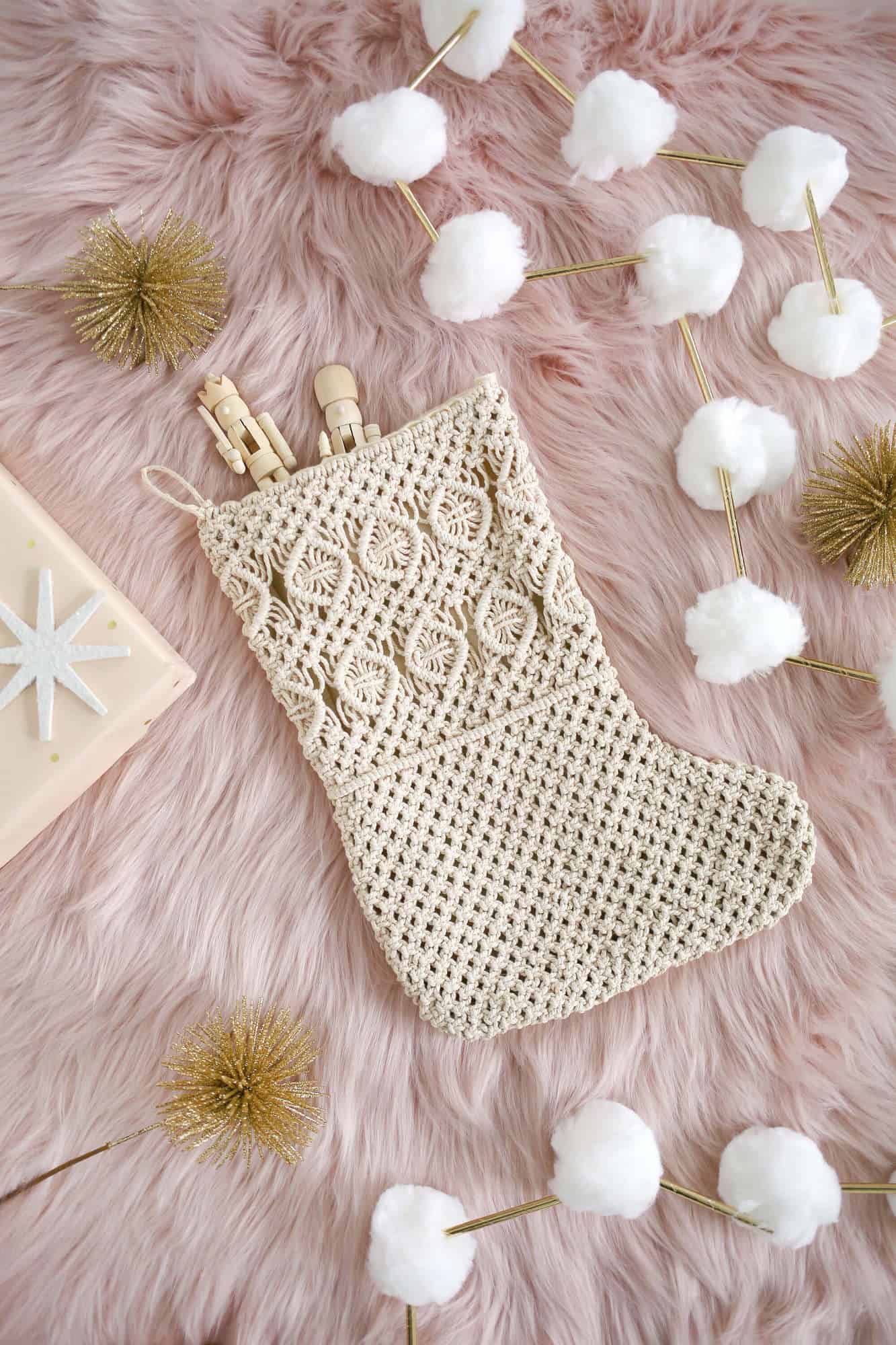 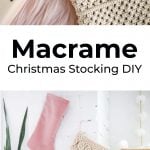 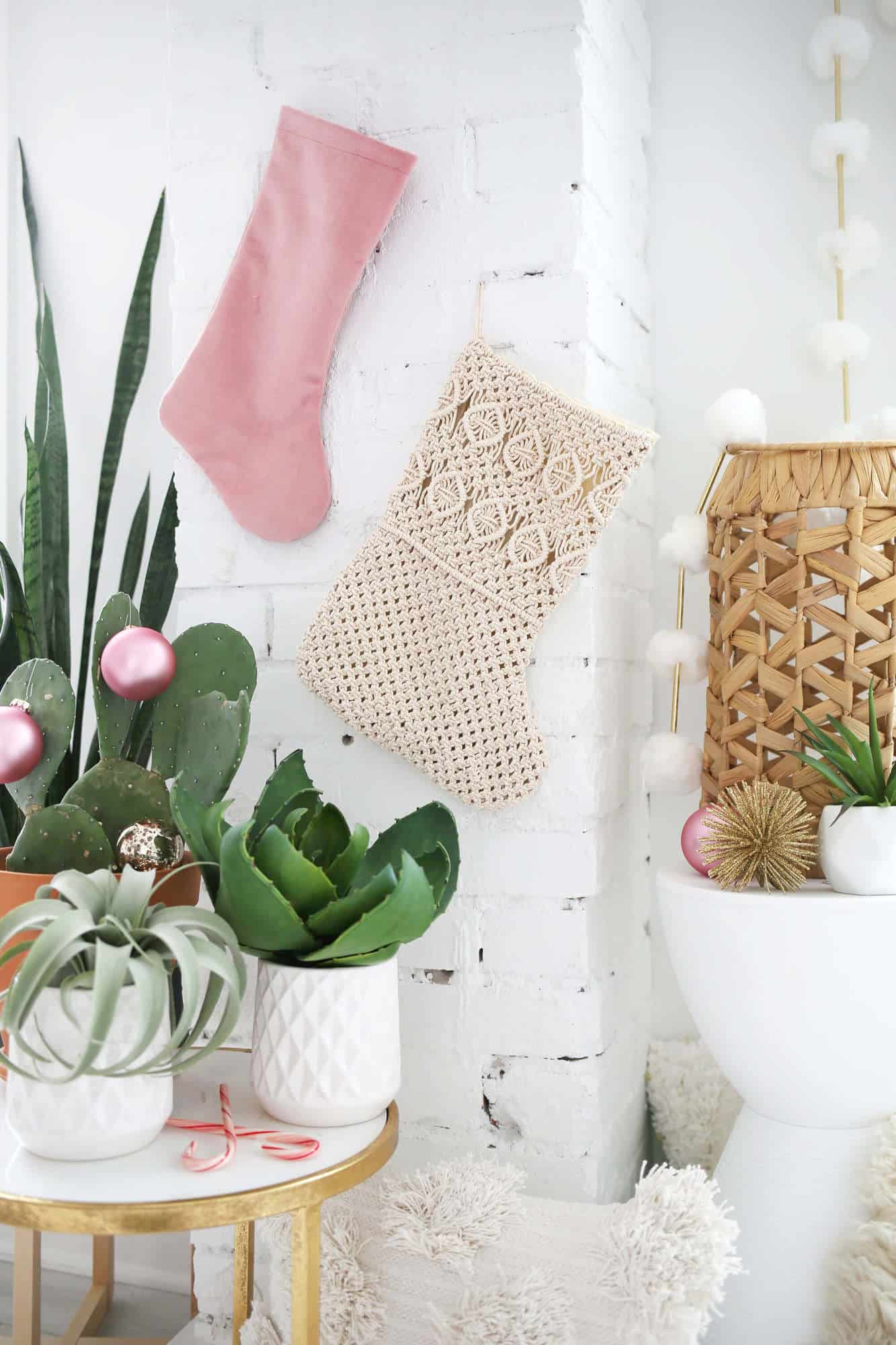 Raise your hand if you’ve been searching for a beautiful macrame Christmas stocking tutorial to no avail?! Well, after some careful thought, a few wild stabs in the dark, and plenty of patience, I’ve designed a Christmas stocking using simple knots that still offers plenty of structure so that it’s not just decorative!

You can make this macrame projects in a few hours using the thin rope I’ve used for a delicate look or size up on your rope and modify the design a bit on your own. Since it’s neutral, it would fit with any color scheme you’ve already got, but you could also easily dye your rope if you’re wanting something more colorful for your holiday decor.

This is one of those Christmas stockings you’ll want to keep for years to come, so be sure to save this tutorial in case you need to make another one next year!

If you’re familiar with macrame basics already, you could easily customize the design with your own knot patterns using my instructions for the silhouette and backing. 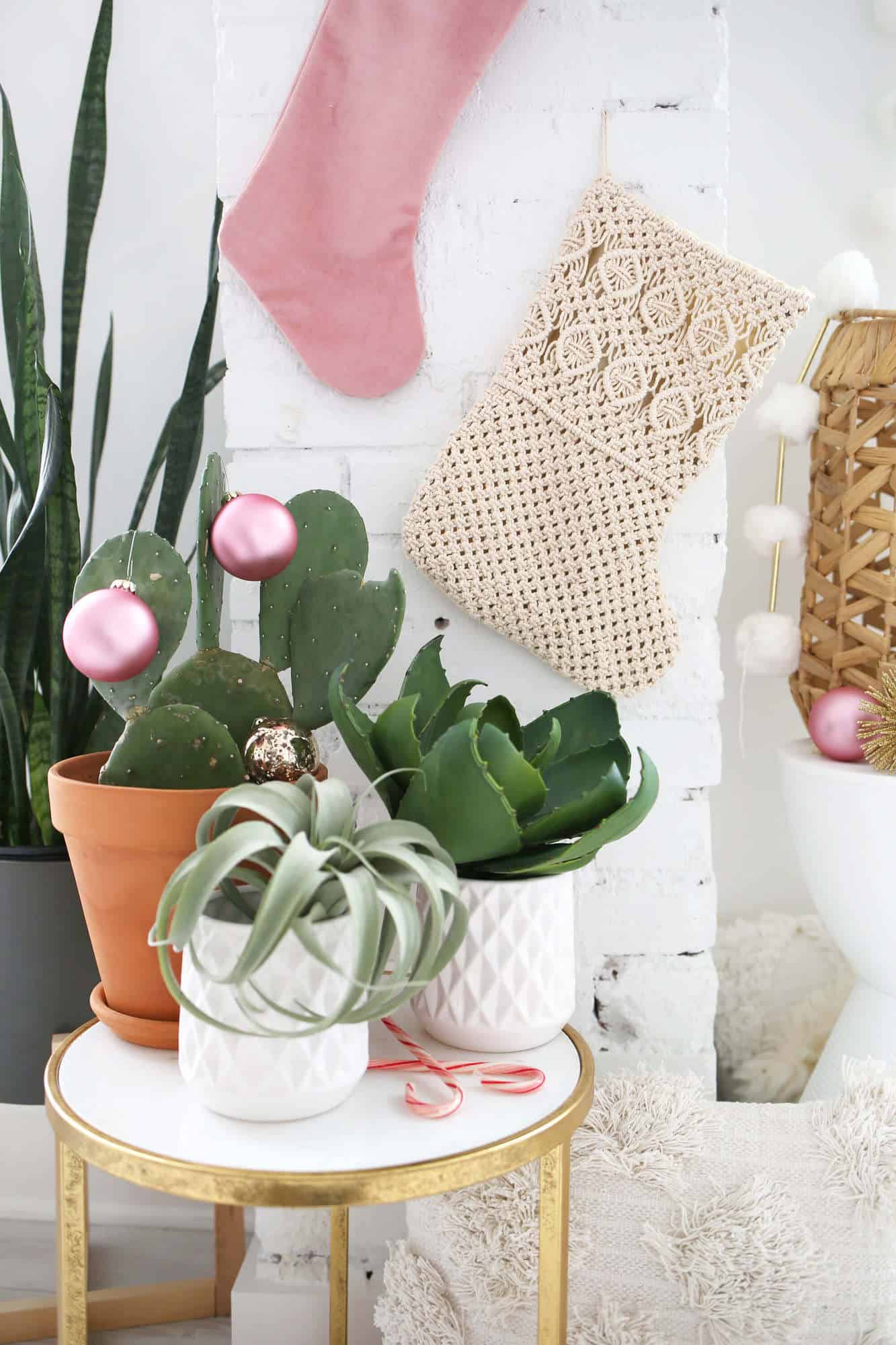 Supplies:
-500′ of 3mm cotton rope
-12″ wooden dowel
–3mm cotton macrame cord
-1/2 yard of off-white wool felt
–over the door hooks measuring at least 10″ from outer hook to outer hook or standing clothes rack similar to this one or this one
-sewing machine and thread (or you can hand stitch everything together)
–sharp tapestry needle
-scissors
-straight pins

Step One: Cut 30 strands of rope measuring 15′ each. Attach each of your 30 strands of 15′ rope to your dowel using a lark’s head knot (see here). Do your best to attach these so that the ends are even and then space them out evenly along your wooden dowel so that you have about 1″ of free space left on each end of your dowel.

Using your additional piece of rope, tie one end in a double knot on one end of the dowel and the other end on the other end of your dowel to create a hanger. Adjust this to the height you desire so that it’s hanging at a comfortable height from your hooks to be able to work on.

Step Two: Using the first four strands on the left side of your dowel, tie a half knot. The two center ropes stay where they are and the two outer ropes pull away just a bit. Then create a bend in the outer left rope and move it towards and then under the outer right rope as shown.

Step Four: Pull this second half knot snugly into the first half knot to create a square knot.

Step Five: Repeat steps two through four with the next group of four ropes, and so on, and so on, until you’ve completed 15 square knots total.

Step Six: Pull the outer right rope across the front of all the other ropes (to the left) and drape the end on a coat hook. This is going to be the base for the next row of single knots that will create a horizontal row. Use the second rope from the right side to tie a single knot around the rope you just draped across.

Step Eight: Continue tying consecutive ropes in a single knot all the way across. You don’t want this to be so tight that it pulls the width in at the edges.

Step Nine: Follow this with another 15 square knots snugly under your horizontal row. Then create a second row of square knots by skipping the first two outer rows of rope on the left side before continuing your pattern of square knots using four ropes each. This is called an alternating square knot. It will leave you with two extra ropes on the right side as well.

Step Ten: After four rows of square knots and alternating square knots, you’ll create your first diamond. I think it also kind of looks like a mid-century ornament! You’ll use 12 strands of rope on the right side of your piece. I like to pull all the other non-working ropes off to the side to keep things from getting too tangled.

Wrap the sixth rope from the left over the seventh row from the left using a double half hitch knot (two single knots). This will create the top point of your diamond.

Step Eleven: Wrap the fifth, fourth, third, second, and first ropes around the seventh rope using the same double half hitch knots to create the top right side of the diamond.

Then wrap the eighth, ninth, 10th, 11th, and 12th ropes around the sixth rope using the double half hitch knot to create the top left side of your diamond.

Step Twelve: Use the 11th rope and the second rope from the right side to tie a square knot around all of the ropes in between. Don’t pull too tightly—you just want them to rest against the edges so they all have room to breathe.

Step Thirteen: The 12th rope will be the rope you wrap the 11th rope around with a double half hitch. This will create the elbow of the diamond on the left side.

Step Fifteen: To create the bottom point, wrap the new sixth rope from the right side around the new seventh rope using a double half hitch.

Step Sixteen: This is how your finished diamond will look. You did it!

Step Eighteen: Tie eight more rows of square knots and alternating square knots. This is where we’ll increase the silhouette for the foot. You should have two extra ropes on the right side.

Step Nineteen: Slip a 4′ section of rope through the loop above the two extra ropes on the right side. Center it so that you’ve got two more strands of rope to use. Then use your four free ropes to tie another square knot in the eighth row.

Step Twenty: Tie a ninth row of square knots all the way across from the left to the right. This will still leave you with an additional two rope strands on the right side. So, add another 4′ section of rope through the loop above the two extra ropes on the right just like in step 19. This introduction of new strands will increase the width of your stocking to start the toe shape.

Step Twenty-One: Once you’ve finished your ninth row, add two strands of 4′ rope through the loop above the outer knot. This will widen your stocking even further for a more distinguished toe shape.

Step Twenty-Three: The next section of rows will taper in at each side by two ropes on each outer edge. This means rows 20 through 25 will be decreasing on each end by two ropes.

Step Twenty-Four: Here’s a close up of the bottom section. You’ll have much shorter ropes to work with at this point! I suggest trimming them down to about 2″ for now. If they get too short, they may start unraveling. 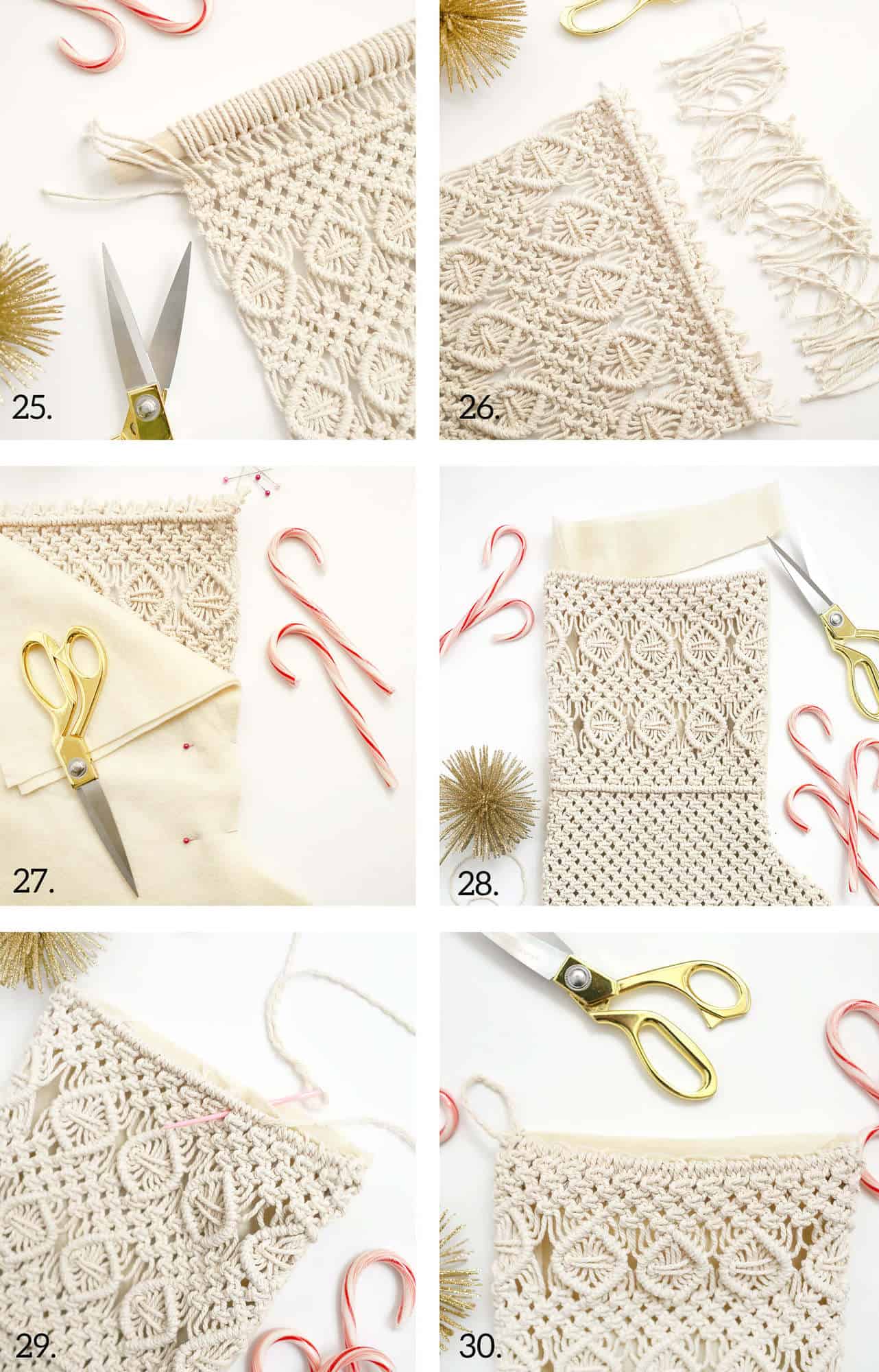 Step Twenty-Five: Let’s get this piece off of your dowel. Loosen the lark’s head knots and cut them off.

Step Twenty-Six: Trim your rope strands so that there is only about 1/2″ above the first row of square knots.

Step Twenty-Seven: Place your finished macrame piece on top of two pieces of wool felt. I chose this fiber because you don’t need to worry about unraveling or adding a hem on the back side. Plus, it feels extra cozy in your hands. Use the macrame piece as your template and cut out the same shape in the two pieces of wool with about 1/2″ of room around the perimeter.

Step Twenty-Eight: Turn right side out so that the macrame layer is on the front. Tuck the square knots at the top inside so that they’re between the front of the macrame piece and the middle layer of wool. This will give you a nice clean line at the top. You’ll have a little extra wool felt on the top. Trim it down so that it’s flush with the top of your macrame piece.

Step Twenty-Nine: With a sharp tapestry needle and thread or leftover rope, stitch the middle piece of felt to the horizontal row of macrame. Be sure to tie a knot where you begin and end. You can use a blanket stitch or a whip stitch, which is where you stitch through both layers from back to front over and over.

Step Thirty: Add a three-inch loop on the left side so you can hang it anywhere you like! 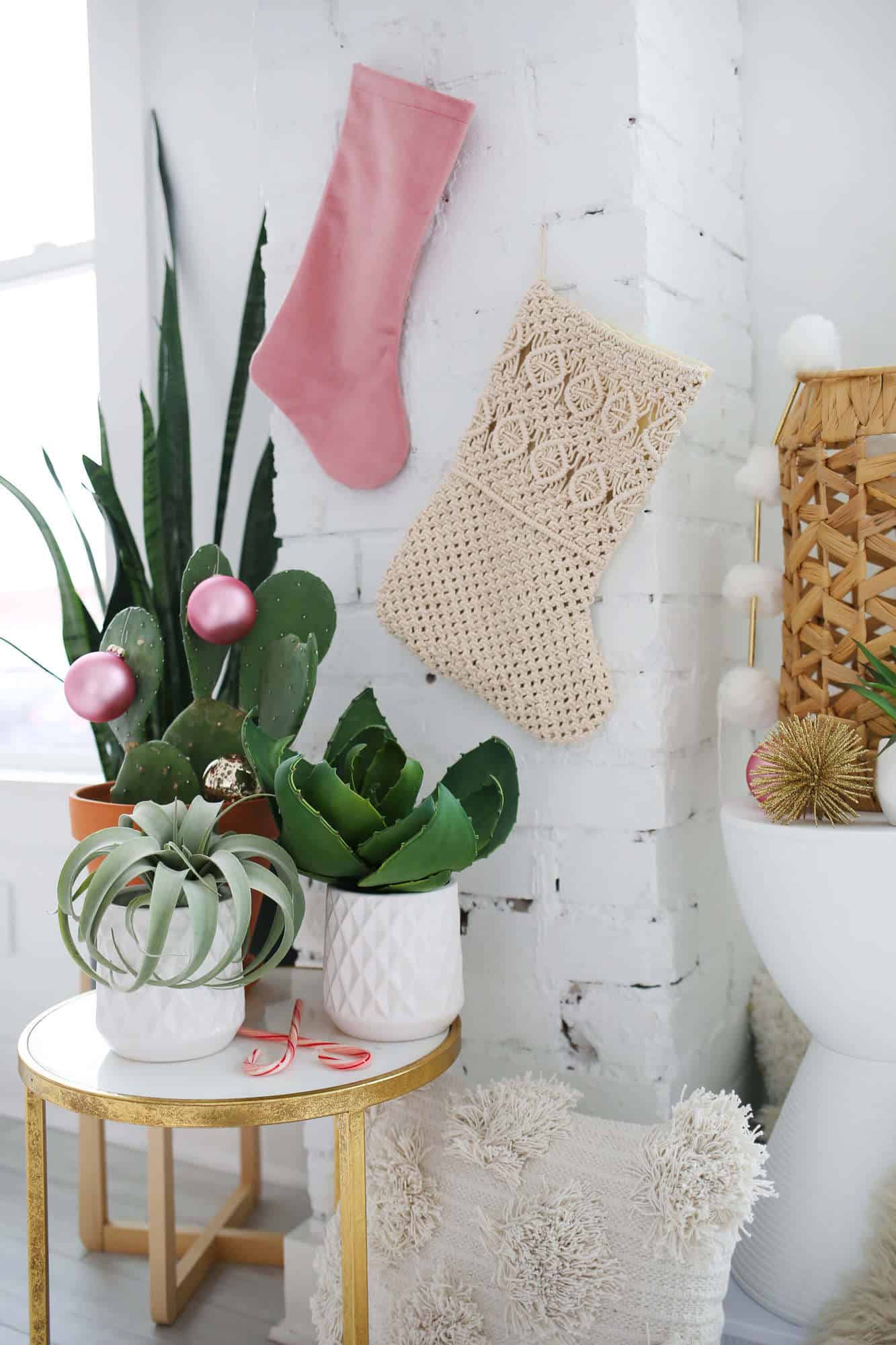 The wool felt pieces will create a sturdy pocket while the macrame design on the front will only reinforce it so that if you were really good this year, Santa can fill your stocking with something substantial! Since wool may shrink even more than it has, I suggest spot cleaning your stocking should it get candy cane or cookie crumbs on it.

Wouldn’t miniature macrame stockings be sweet as a garland or ornaments? I can’t wait to see what you make for your own space this year! Looking for a woven stocking tutorial? This one from a few years back is still a favorite! – Rachel

If you’re interested in learning more about macrame, one of my favorite books is Macrame at Home by Natalie Ranae. Her step-by-step knot section is one of the most helpful I’ve seen.

I just found this beautiful project and cannot wait to try this project out this month! Do you know the how tall the stocking is at the end?

If time or skill is an issue, it’s possible this could be backed by fabric, rather than create another macrame sock shape for the back. Needlepoint stockings are made like this, so I don’t think it would be ‘cheating’ to sew a fabric backing to the macrame front.

Beautiful! Just wondering how long it took you To make this? I’m cutting my Christmas present making quite fine! Whoops!

Stunning! This is a lovely stocking, and so wonderful you made it yourself.
Debs @ https://tiger-mint.com

So glad you love it!!!
-Rachel

You are seriously so talented, Rachel! I love every project you do across the board! How difficult would you say this is for someone who hasn’t done any macramé before, but is generally pretty handy otherwise (I make jewelry for my side job)?

This is only the third macrame piece I’ve ever done. I think it’s a very forgiving medium if you understand the basic structure of the knots and it sounds like you would! Thanks for the sweet words! -Rachel

This is beautiful but I have never done anything like this and I never have time for myself. I work full time, care for my mother ,4 adopted boys, therir oder brother and my daughter who has an incurable illness.

I would love to do this but by the time I get the ladt child raised I will be 72 but who knows I may be able to then.

Merry Christmas to you and your family

I love the look of the stockings! I’ve never tried a macrame DIY before, but I think it’d make a nice weekend project this month! 🙂

Yes, it’s one of those projects you’ll be so glad you stuck through to the end because it’s such a beautiful finished product!