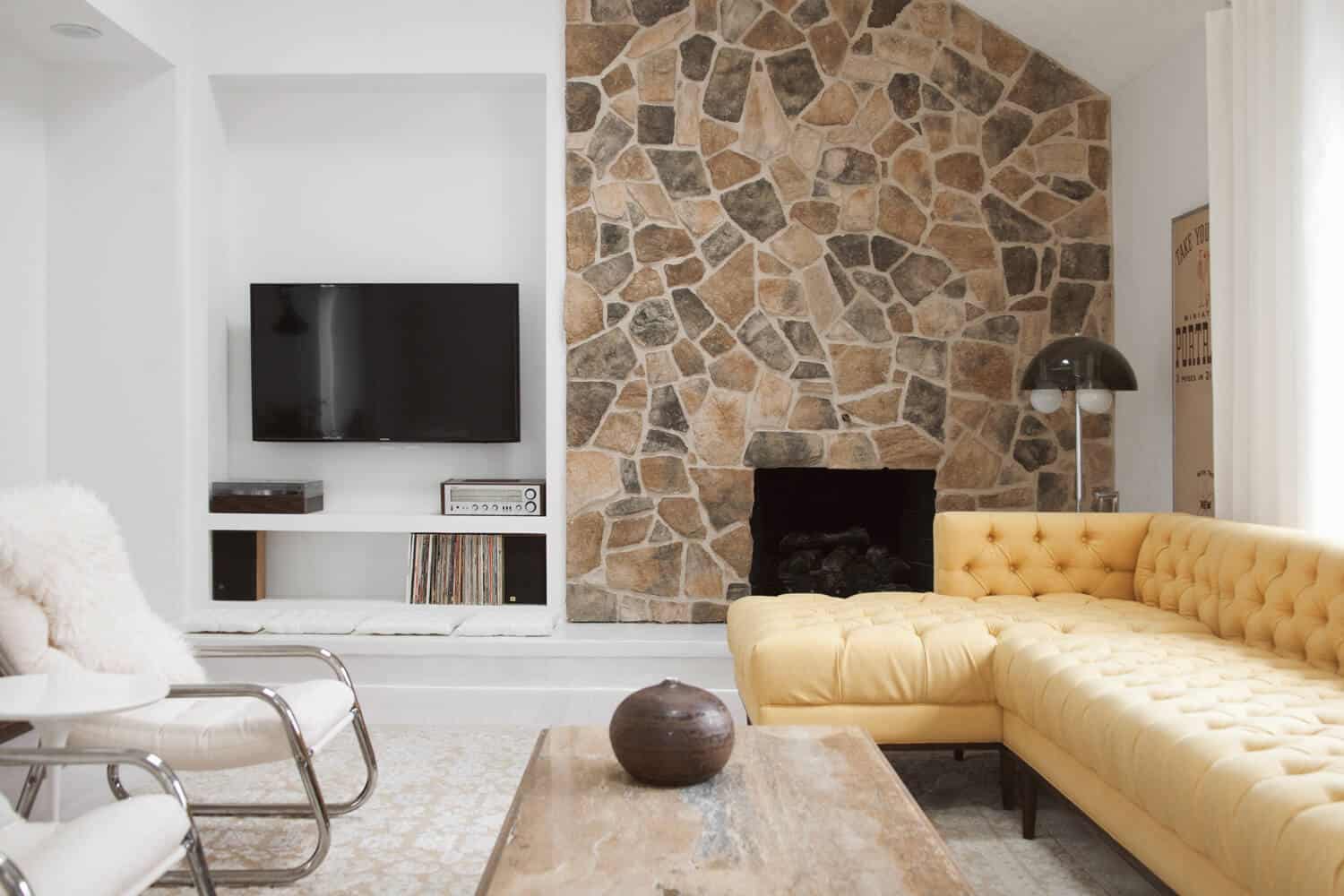 Last June, I moved into a basic suburban home straight out of your favorite ’80s teen movie in every way. Okay, so someone did us the favor of removing tired wallpaper and painting everything tan and brown. But we loved how much the peculiar floor plan exactly fit our particular needs, and I was really taken with this grand living room. It didn’t exactly look like a grand space when we moved in, but I saw its potential for the fireplace of my dreams, and was enamored with the tall ceilings complete with skylights and weird sofit-clad nooks on the walls. (You can see the plan of our first floor in this blog post.)

The living room has finally undergone its transformation, and I’m so excited to share the process with you! We now have a bright space with a beautiful stone fireplace that accentuates the high ceilings. Below the fireplace is a long hearth, worthy of any mid-century masterpiece, but still fitting in with our ’80s home. We aren’t shy about the fact that we watch TV, and I decided to show it in all its glory, since this is the family room in our home and hey, our family likes movie nights, and sometimes movie days! 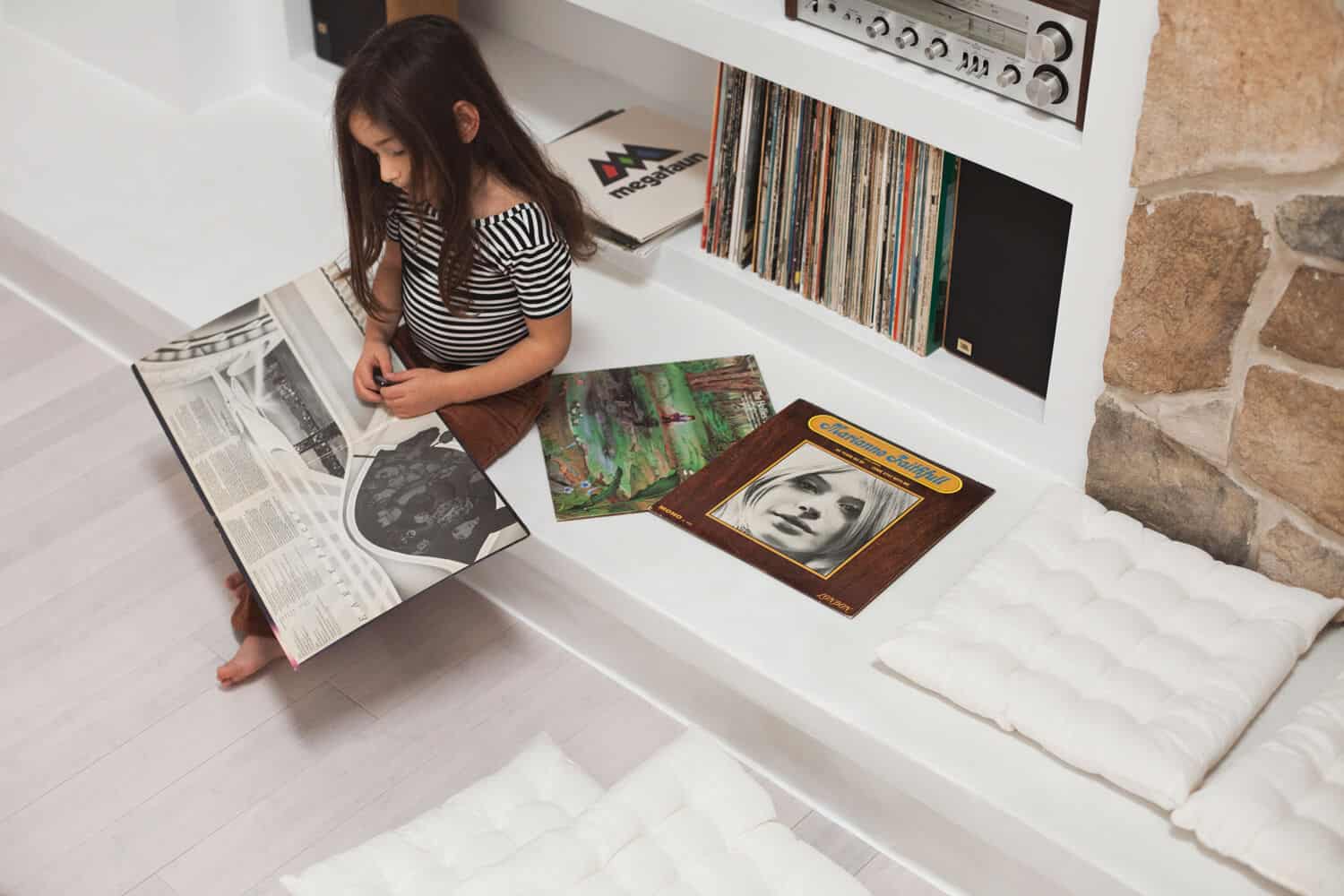 When I first drew out the plans for the fireplace wall makeover, I had planned to build shelves above the TV, as well as the shelf you can see below it. I wanted to wait until our TV was installed to see how the space would feel, and was surprised that I felt it was perfect without shelves above the TV. Maybe that will change someday, but we are building a shelving wall in our study, so I can’t imagine that we would need any more book storage. I do like how minimal it feels, allowing other areas of the room to shine, like the gorgeous stone fireplace!

From the moment I first saw this space, I knew it needed a stone fireplace that went all the way up to the ceiling. Since there was already brick in place, we opted to use a stone veneer, rather than demo the brick or waste square footage by using large stones. In fact, after doing quite a bit of research, I settled on using manufactured stone, called Cultured Stone by Boral. It looks like real stone, but it is 1/4 of the weight of full-thickness stone, and since it is a veneer, it is not as thick either. You can purchase corner pieces to achieve the look of a thick fireplace, but since our plan was to do some drywall work next to the stone, we didn’t end up using corner pieces. I selected the Old Country Fieldstone in the Summit Peak colorway, and used a sanded grout with a wide mortar set. I was thinking I’d like to use an overgrout style, but my husband vetoed me and we met halfway. Check out the dramatic before and after below! 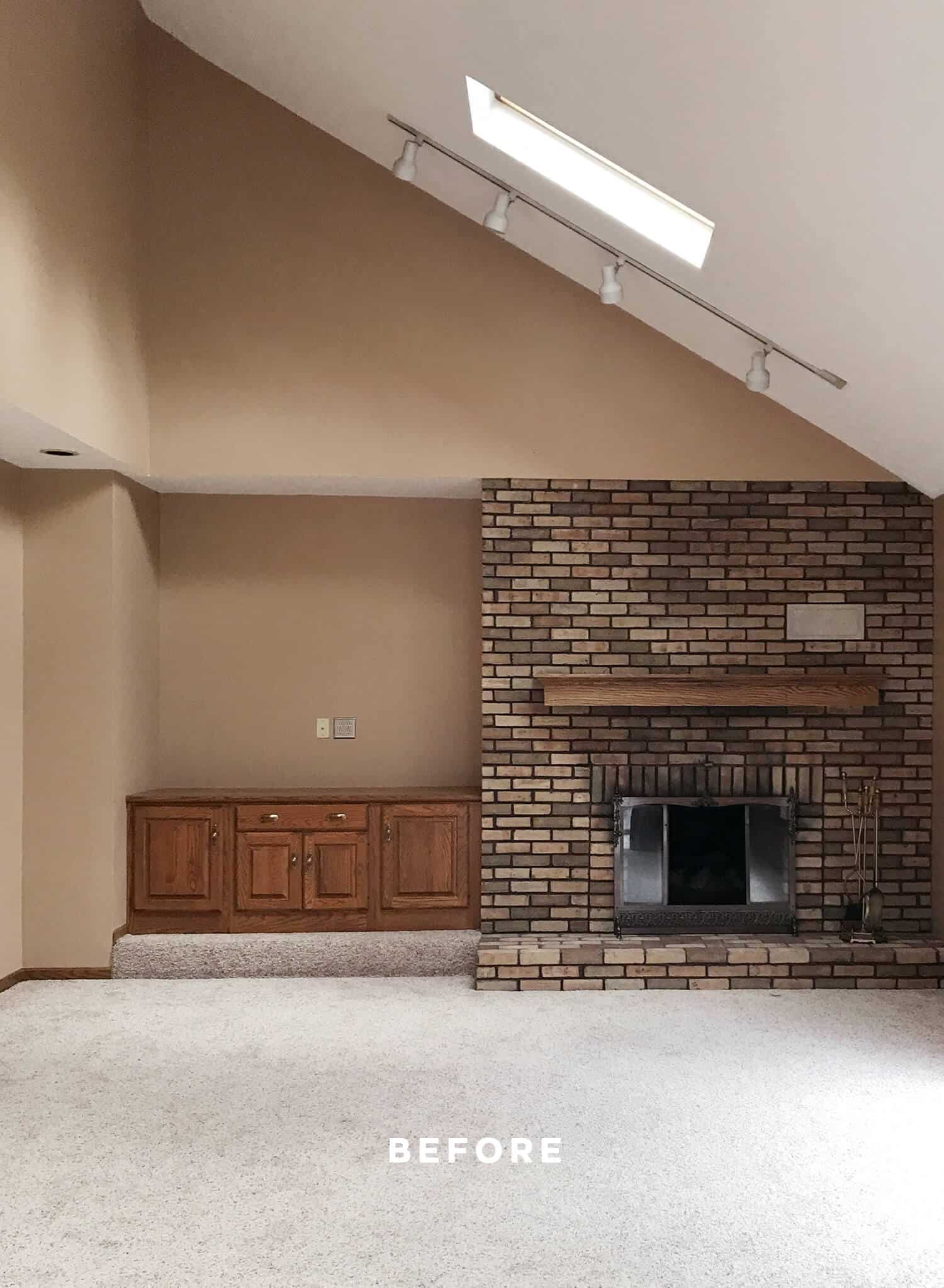 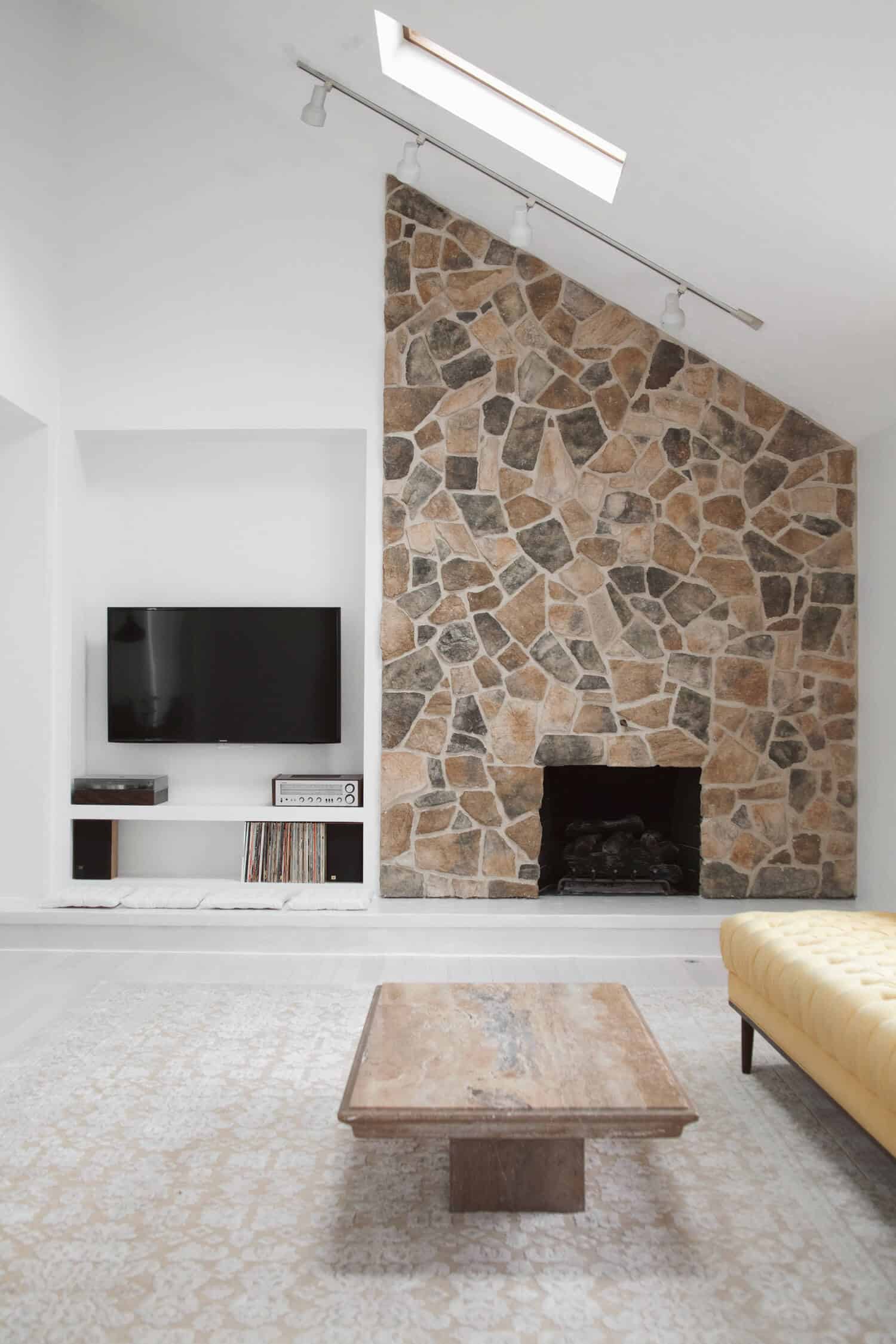 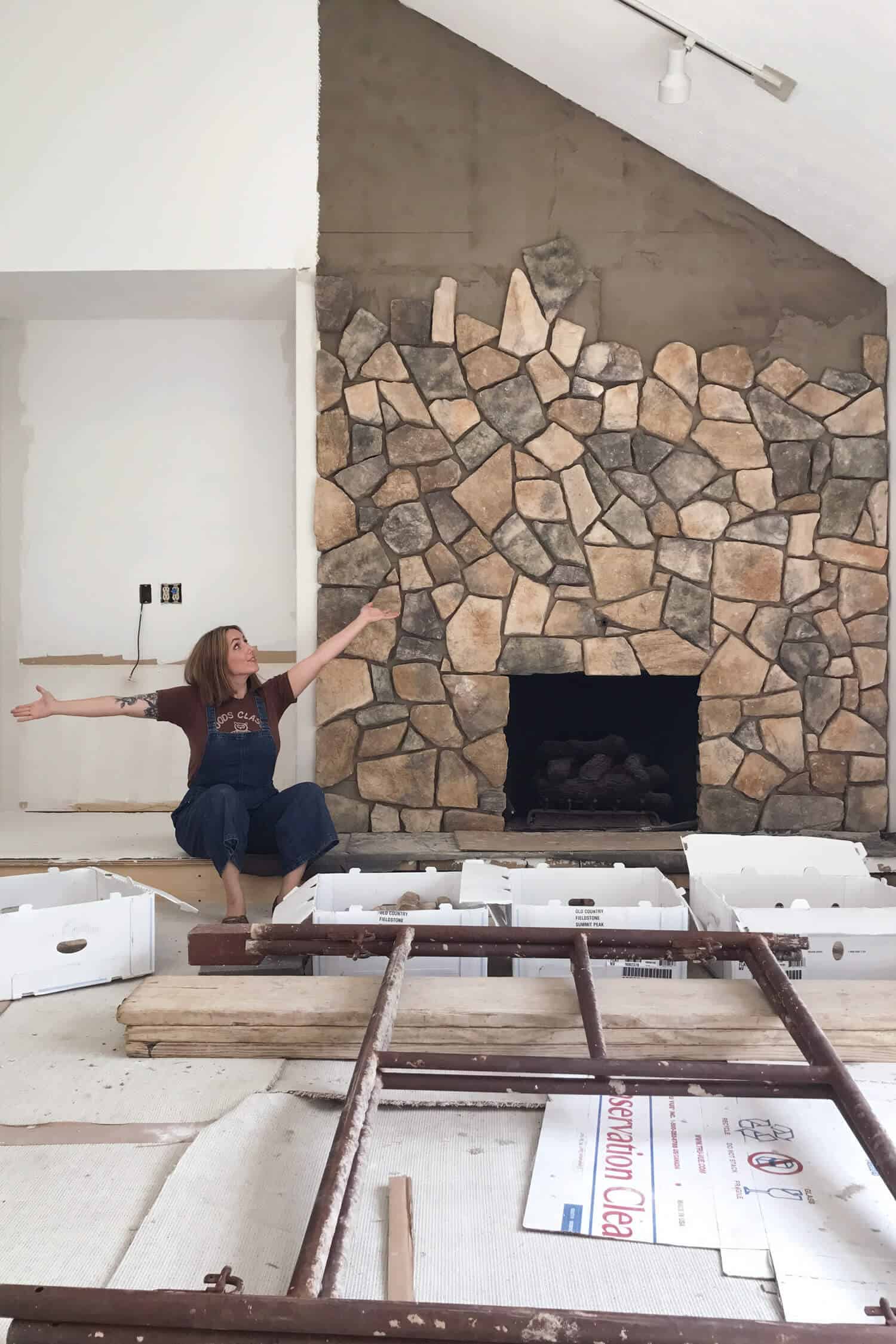 Above is a cellphone picture of me in my excitement after the first day of Boral stone installation. I had considered doing this project myself, and know that I could’ve (hear me roar). But since we were taking on so much work elsewhere in our home, I decided to hire someone to do the work, and I’m so glad we did! My friend Jeremy Miller did a great job. He added a moisture barrier and metal lathe to the drywall section of the wall above the old brick fireplace, and then covered everything with a coat of mortar. It took him two days to place the stone and fill it in with sanded grout. We chose a white grout, which when mixed with the sand makes an off-white color. I liked the contrast and also wanted it to tie in with the hearth and walls around it. 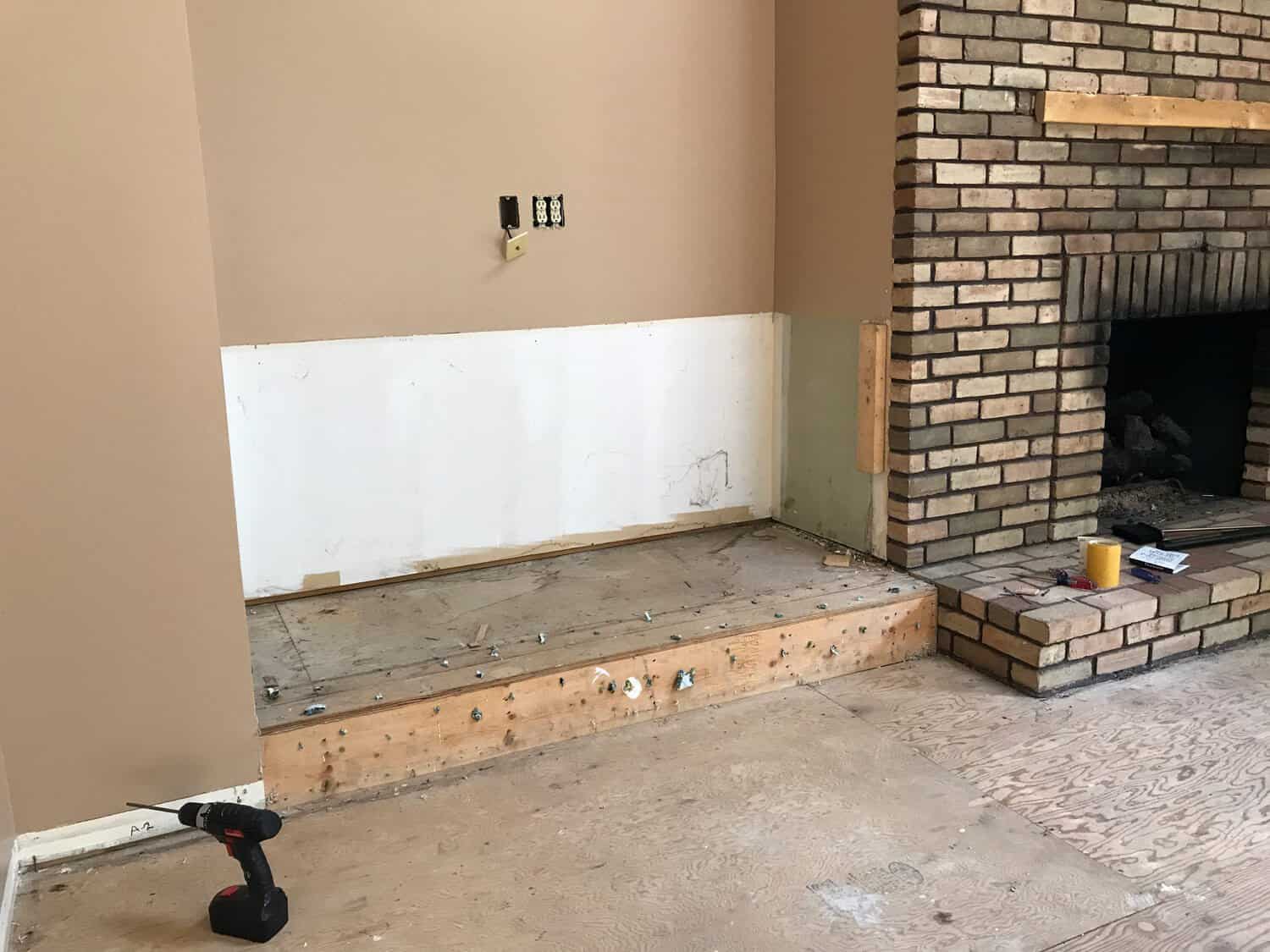 But let’s take a step back to when we first got the keys to our house! I had made all of the plans for the space while waiting for our mortgage to close, so I confidently began demo in the living room on the very first day of homeownership! Out came the carpet and baseboards, down came the mantle, and out came the old cabinets. I had originally planned to remove the platform inside of this media center nook, but when I pulled up the carpet, I saw that the platform beneath was actually the subfloor that went under the walls, not a platform that was built onto the subfloor. Then I pulled up the subfloor to discover plumbing pipes, electrical conduits, and vacuflo tubes going through the space. My plan was foiled! The platform had to stay. 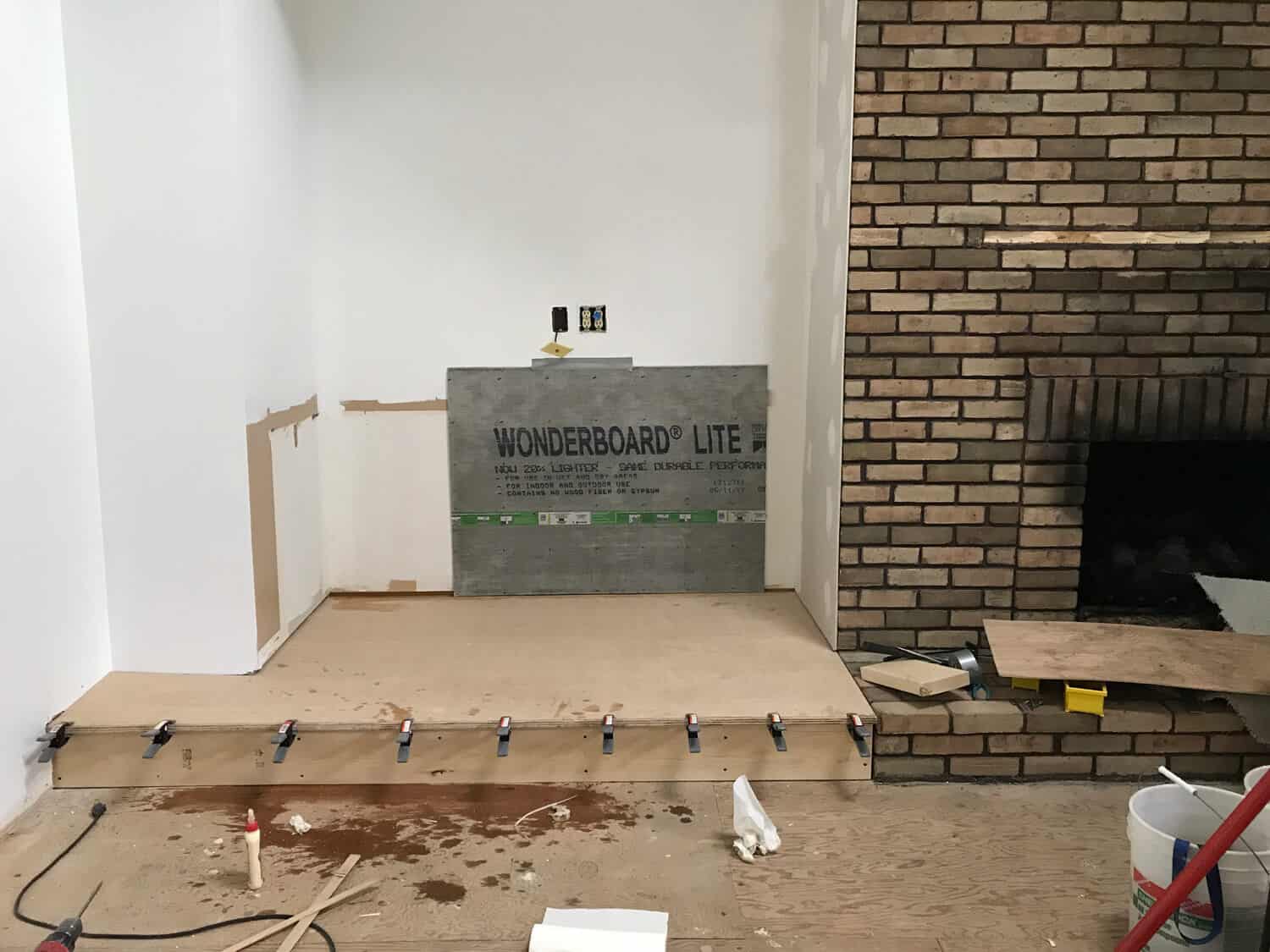 After an afternoon of frustration with The Platform That Came To Stay, I came up with a plan B I liked even better than plan A! I decided to embrace the platform and build it out on the front to meet the depth of the hearth. I decided to create a mid-century style hearth that extended all the way from one wall to the other, to be covered in concrete for a sleek, minimal look that would tie in with the floors and walls, allowing the Boral stone fireplace to take center stage. (More like stage left, but you get the idea …) 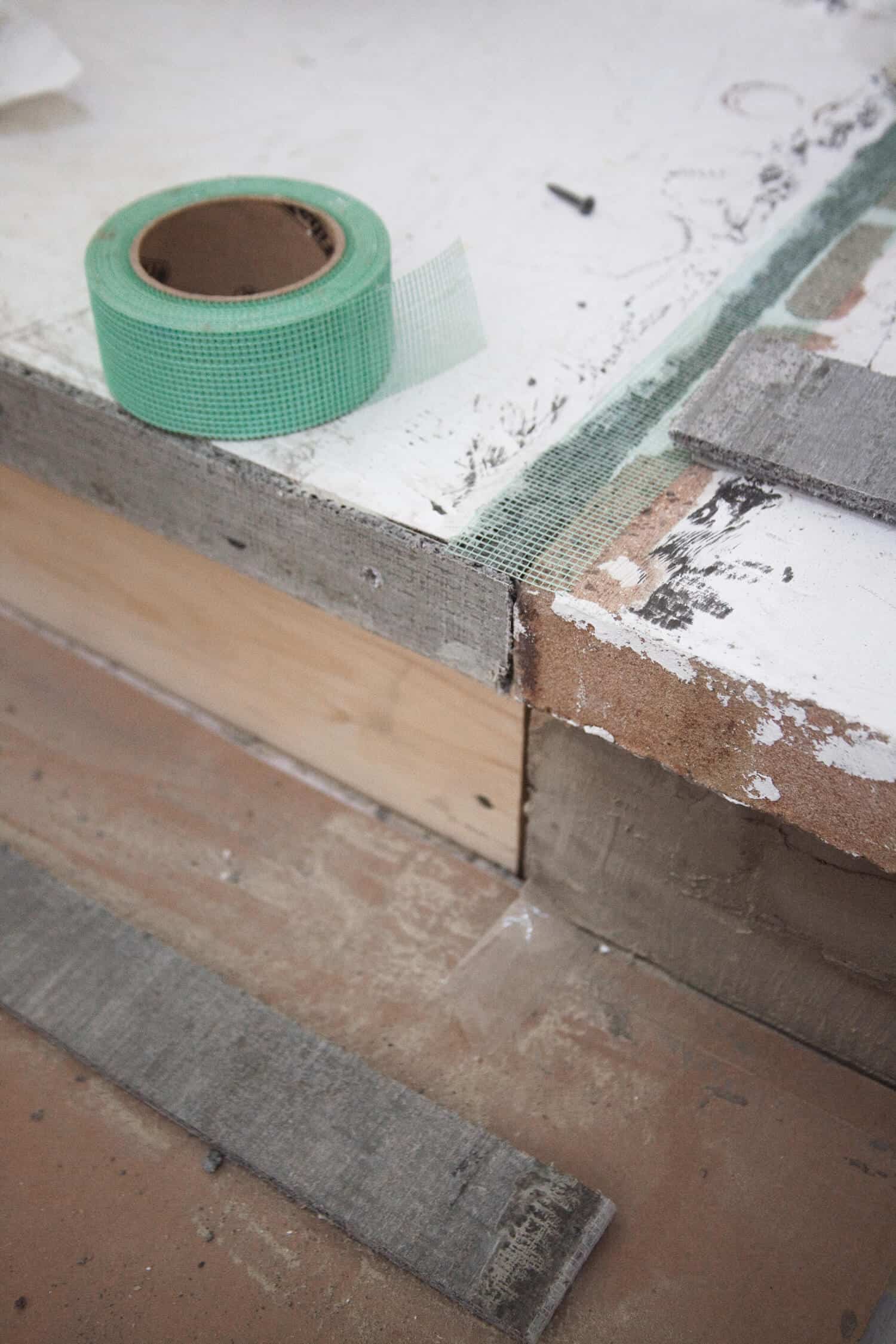 After we built out the platform, we covered it with sheets of Wonderboard that we screwed into place with Rock-On screws, and then I prepped the area for a couple of coats of Ardex Feather Finish in white. Prepping simply involved putting fiberglass joint tape between boards and where the Wonderboard met the brick of the fireplace. This step prevents the concrete feather finish from cracking as the structure shifts with house settling and temperature/humidity changes that affect the wood structure below it.

Ardex feather finish is a material typically used as a floor leveler or to repair subfloors before laying the finished flooring material. But it’s become a trendy finish for countertop refinishing and other home DIY projects with a modern flair. The technique I used on the hearth is actually the same process that was used in the old ABM studio house countertops to cover the formica countertops. On the left side of the fireplace, I was smoothing the Ardex over Wonderboard. On the right side, I was smooshing it into the spaces of the brick.

Ardex is a lot of trial and error, but I learned to only work with small batches at a time, because it sets up quickly and becomes very difficult to smooth out. After about 30 minutes, I went back and scraped off any majorly uneven areas, such as the globbyness around the front ledge of the hearth. I absolutely couldn’t get photos of this because I was working along and also working against the clock with the Ardex.

White Ardex is very difficult to find in my experience, but you can order it some places online. I would try calling around in your area to see if you can buy it locally to save on shipping costs. I didn’t have any luck here in Canton, Ohio. 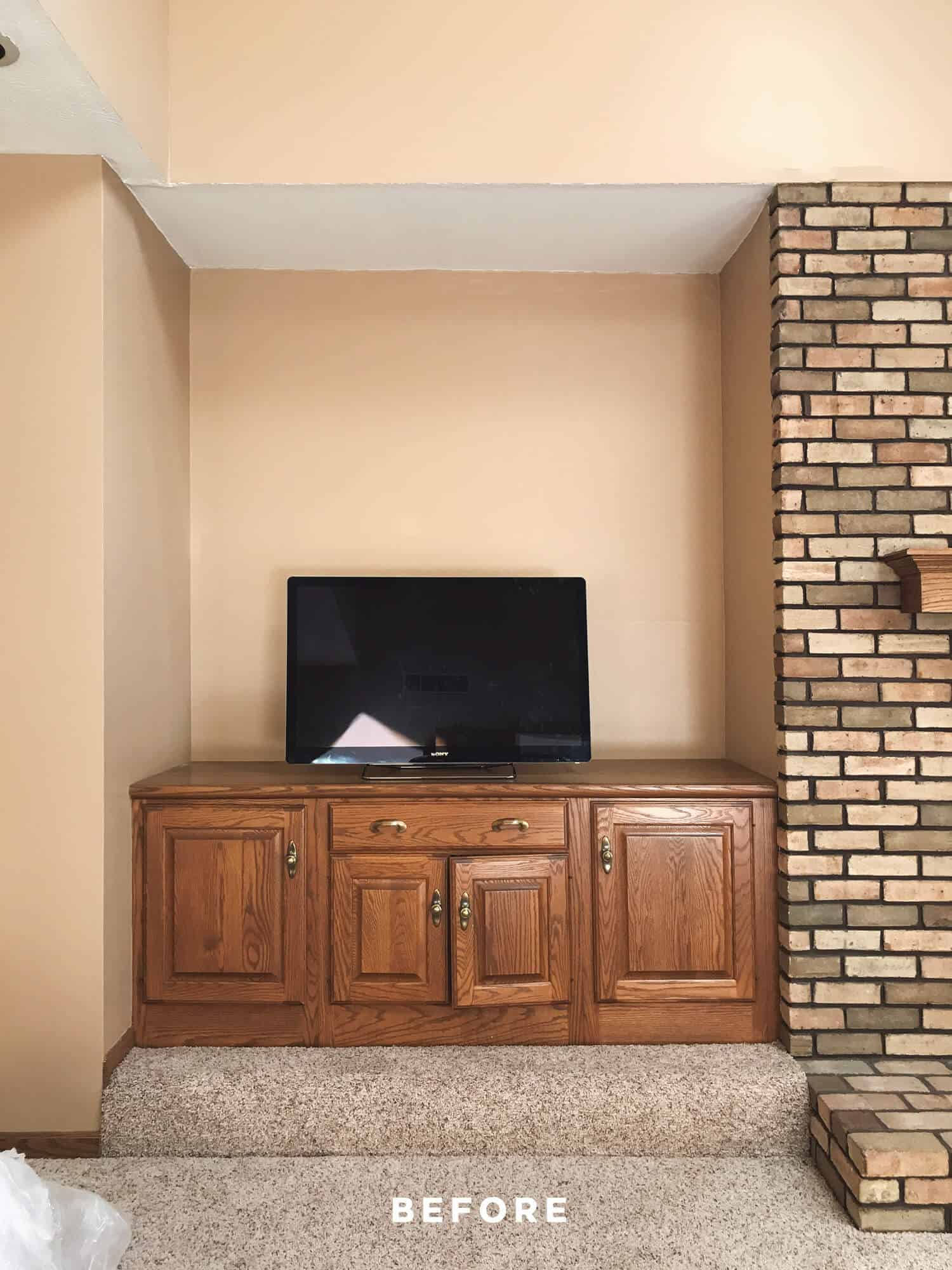 Now for the nook where this very ’80s midwestern media cabinet used to reside. Of course, some of us older folks remember when TVs used to be monstrosities. In fact, until I graduated high school, my family had one of those huge cabinet televisions that was an actual piece of furniture with a dial on the front. A DIAL. When I designed the new space for our flat-screen TV, I knew I wouldn’t need the depth required for an older television, but ironically, I wanted enough room for my turntable and receiver. So my dad (who has done all of my drywall work for me—thanks, Dad!) moved forward the back wall so I had just enough space to build a shelf for my vintage record equipment and a shelf for my speakers and albums. 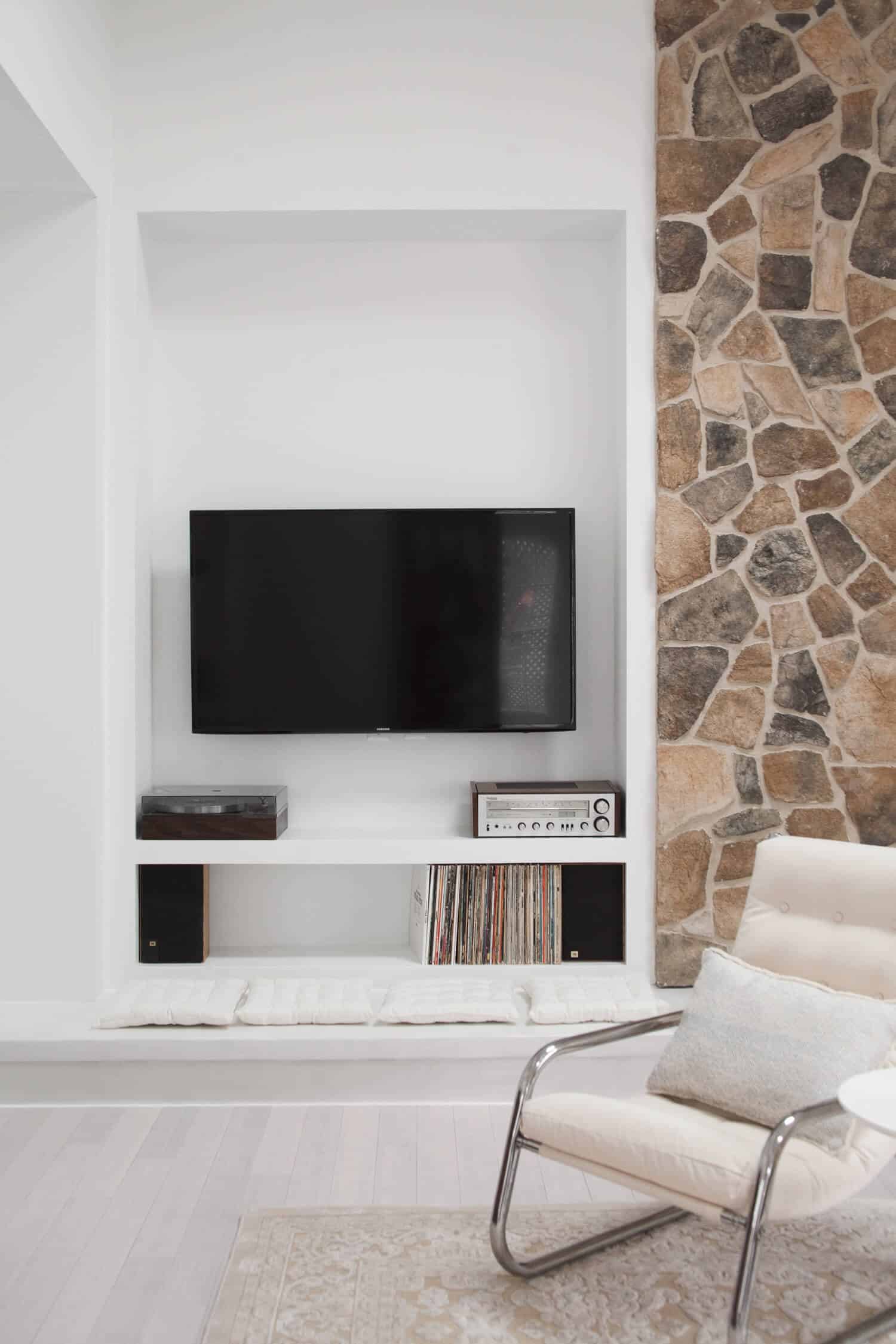 After the drywalling was complete, I built supports for the chunky nook-style shelving using 2x3s, as shown below. I attached the supports to the rear wall and side walls after making sure there was enough room to comfortably fit my records, and of course making sure the shelf support was level. 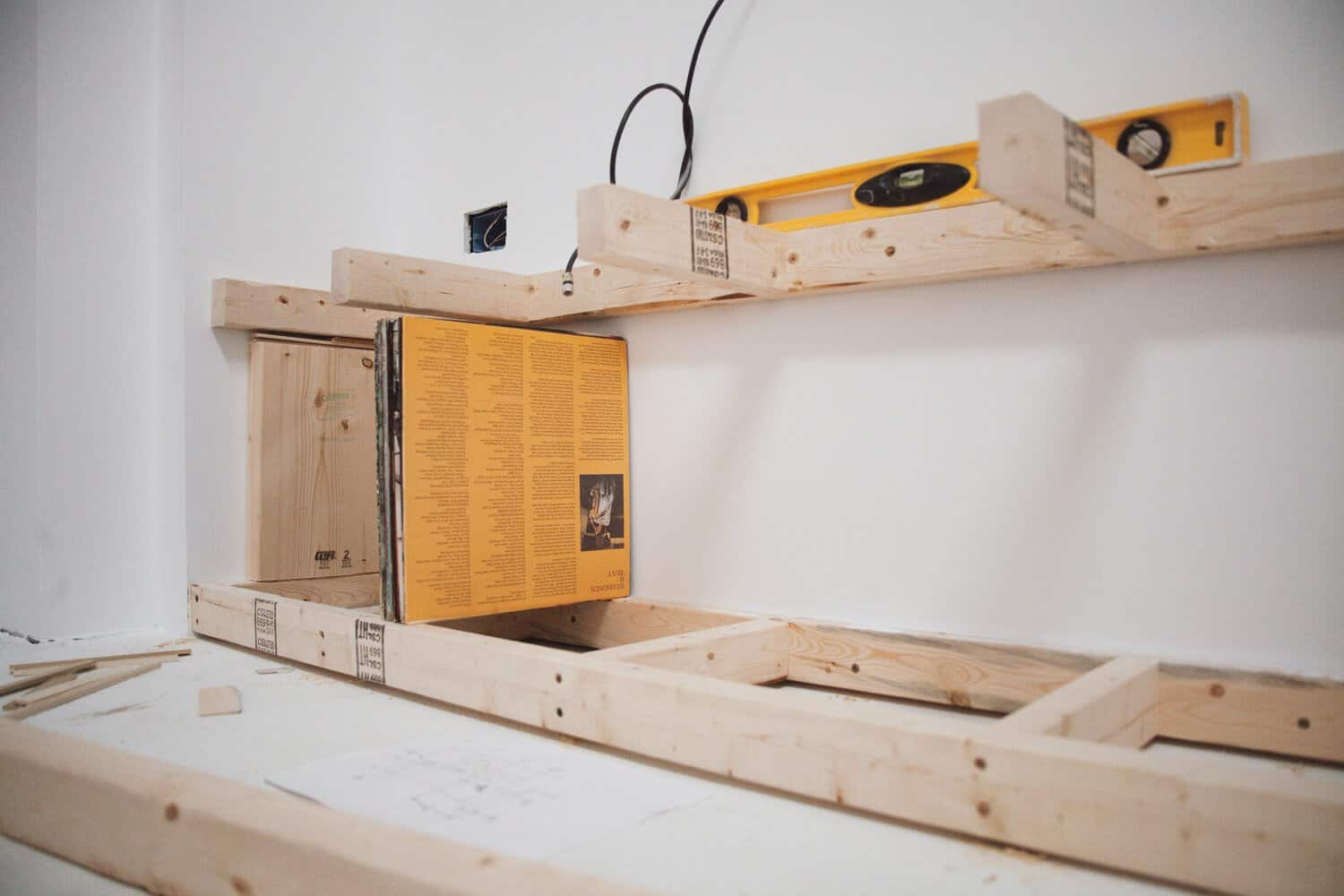 I had planned to take more process photos of the shelf-building when I built the upper shelves, but since I decided not to do upper shelves, I don’t have as many photos as I would’ve like to have shared. Feel free to ask me any questions about this process in the comments at the end of this post! 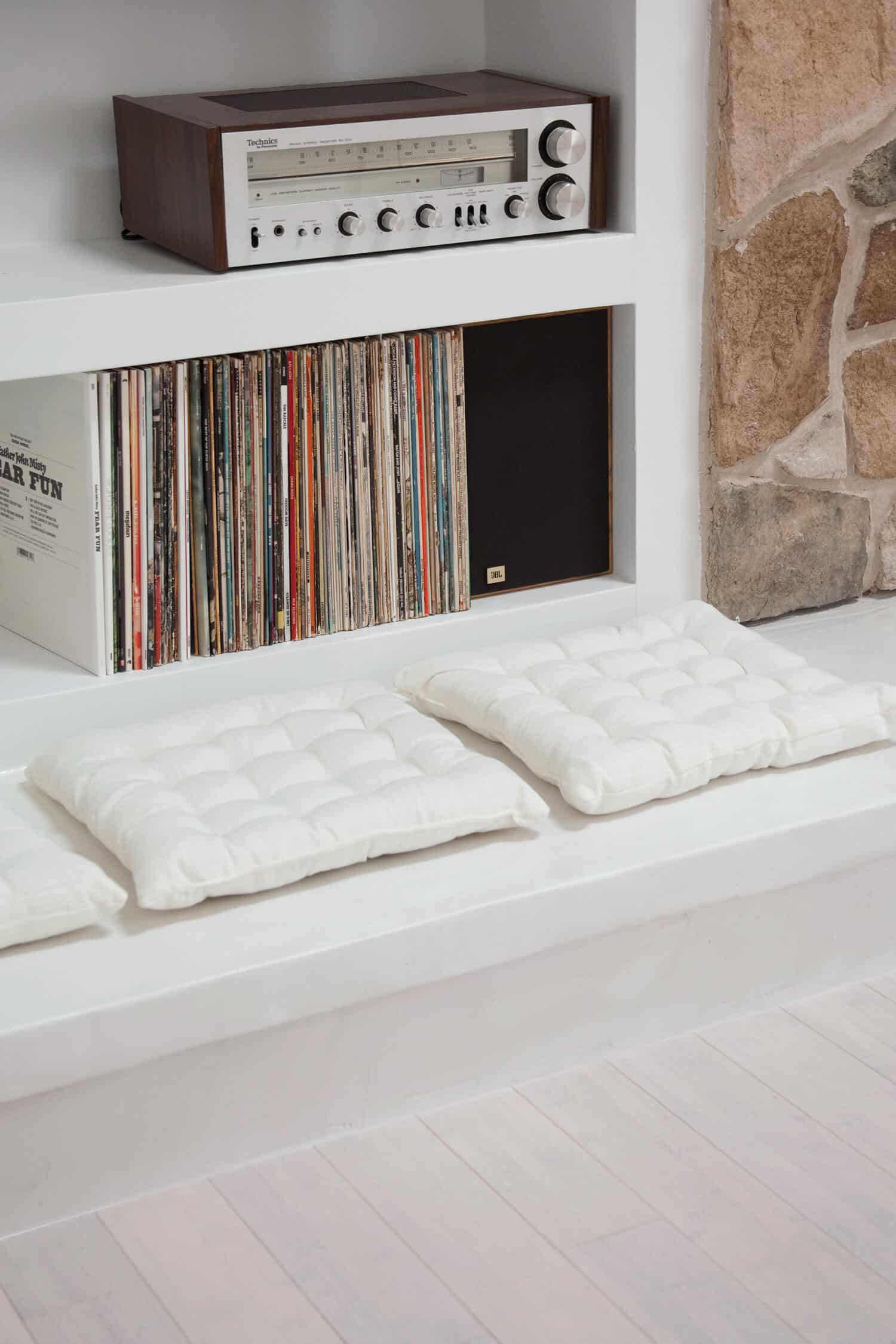 Because we will be using a 2″ sound bar mounted to our TV (situated at the bottom of the TV) and a wireless subwoofer, I decided to keep my record player on its own speaker system. I actually bought “new” vintage speakers that perfectly fit in with my record shelf, and have drilled holes in my shelf to connect all of the wires out of site. Also, since we built the wall that the TV and shelves are on, I added electrical outlets behind my turntable and receiver, as well as behind the television. And when I said I added, I mean Dad added. (Thanks again, Dad!) 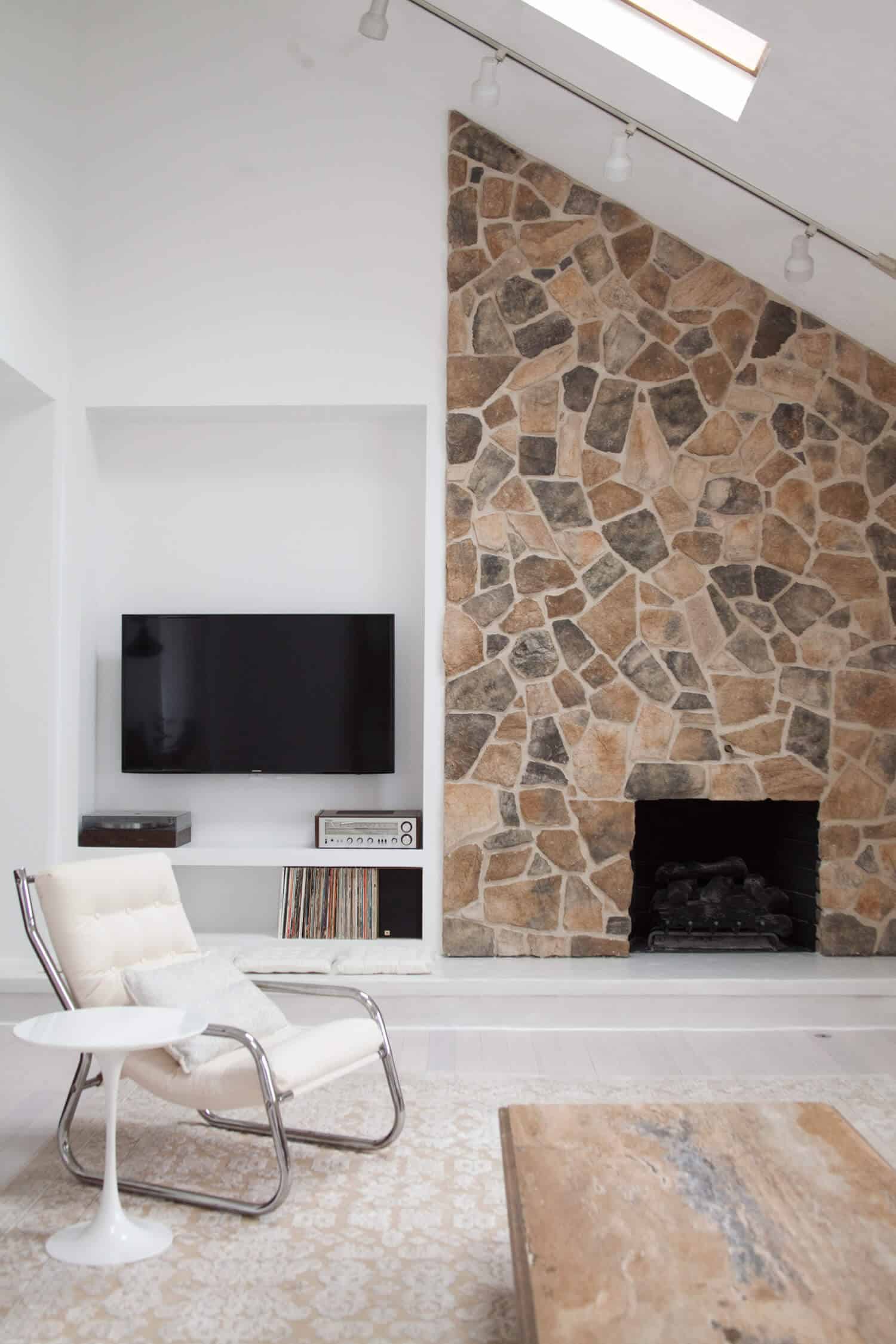 So there she is! I finished up the hearth just in time to decorate for Christmas. I’ll be sharing more of the before and after of this space very soon! Check out the list below to find out where everything is from, and stay tuned for the full reveal! – Mandi