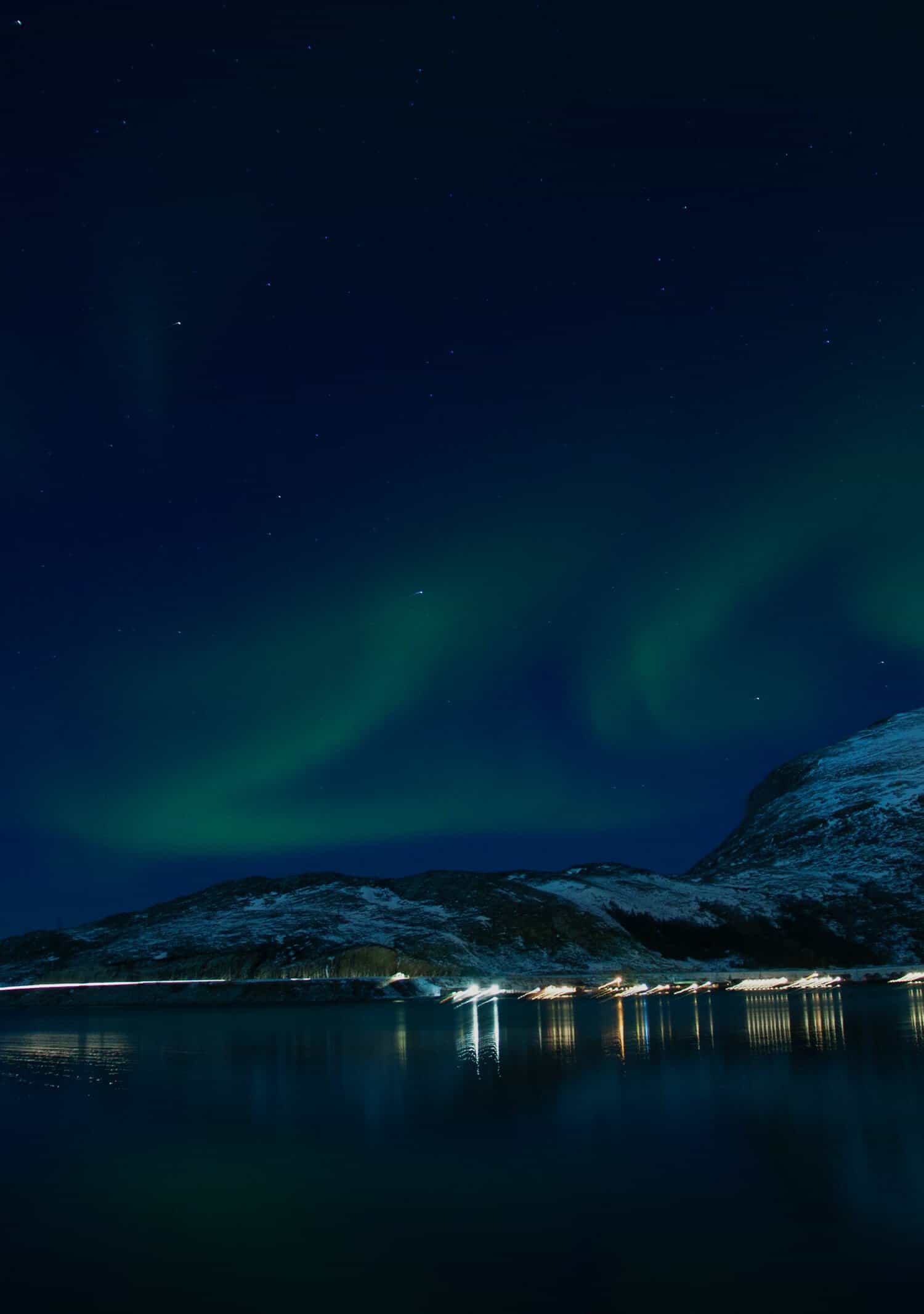 I shared a little about our recent vacation to Norway earlier this week, so if you read that then you already know why we choose to go to northern Norway in the winter: hoping to see the northern lights!!!! Before we went, I had read a few articles online about the Aurora Borealis and generally what to expect (or not expect). I also read from other photographers about their experience photographing this natural phenomenon because, as a photo junky myself, I was really hoping that if we were lucky enough to see the lights that I could get a great photo that I could display in our home from the trip. After reading a bit more about it, I knew I would need to pack my tripod because a long exposure was going to be key to capturing the lights. We had also bought a drone to use on the trip (not for the lights, although I suppose you could?), so we packed that as well. 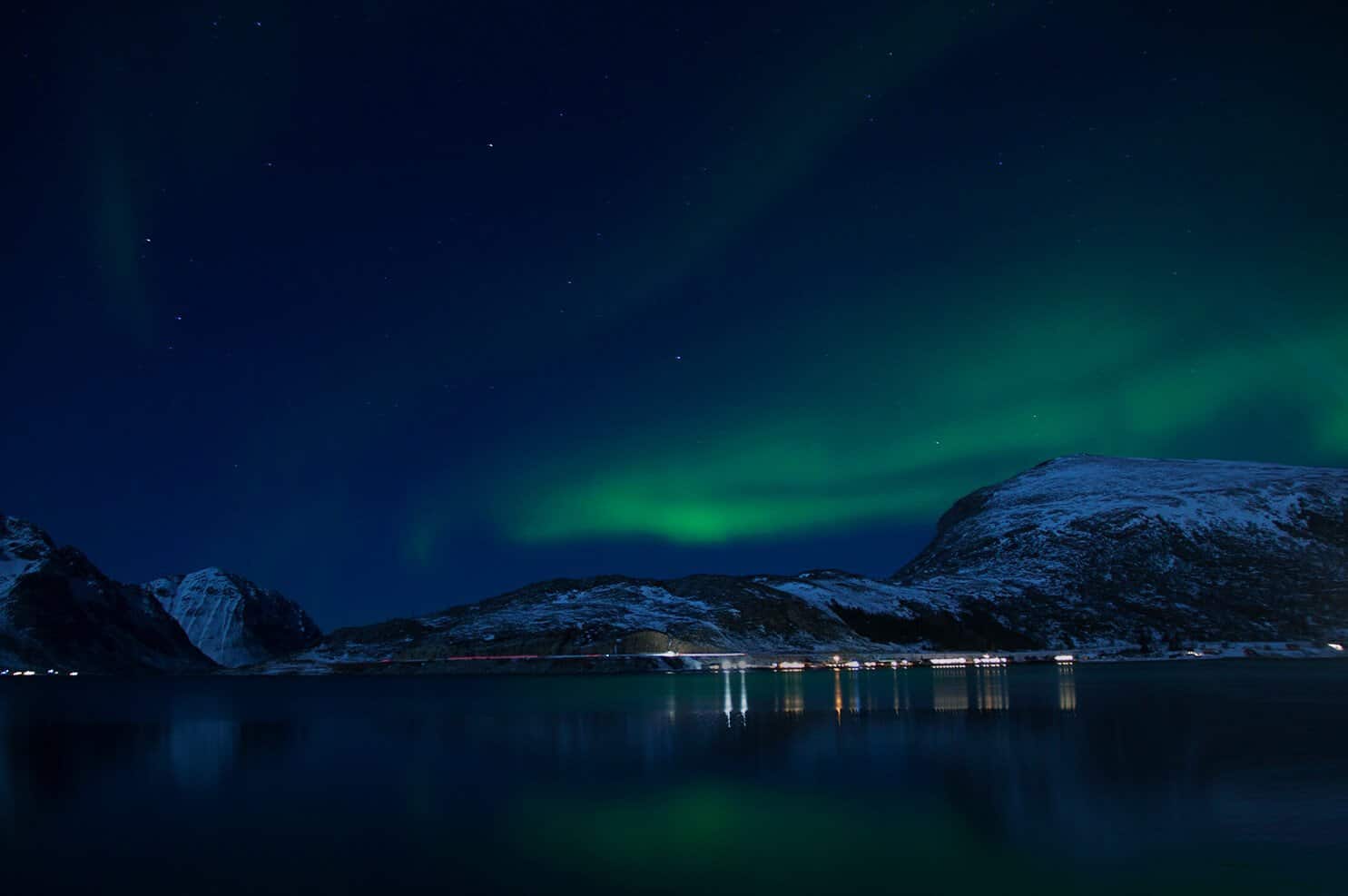 Trey and I NEVER check bags, we’ve both had bad experiences with it before. And most of the trips we go on aren’t super long (except for one month-long trip, but we drove there), so it’s not too hard to pack just a carry-on bag. But since I had extra camera gear, the drone, and snow boots to pack, we decided that we would probably need to check a bag. And you know what happened? THEY LOST IT FOR MOST OF OUR TRIP.

Thankfully, the host of our Airbnb was (extremely) gracious and let me borrow a camera, tripod, and snow boots. (!!!!!!!!!) I am still thanking the universe for this kindness because although I would have enjoyed the trip no matter what, I would have missed my chance to photograph the lights as we only saw them the first night we were there. And I would have been extremely cold and uncomfortable on our hike.

Even though I was incredible thankful for the borrowed camera (a Canon 500 with the kit lens and a tripod), as any photographer reading this knows, it’s a bit uncomfortable using a different camera for the first time. Even if you know exactly what settings you want, figuring out how to find the right menus and buttons might be a little different from your camera, so it takes a little bit to get the hang of it. So I was pretty nervous to use an unfamiliar camera to photograph something that was bound to be challenging anyway. 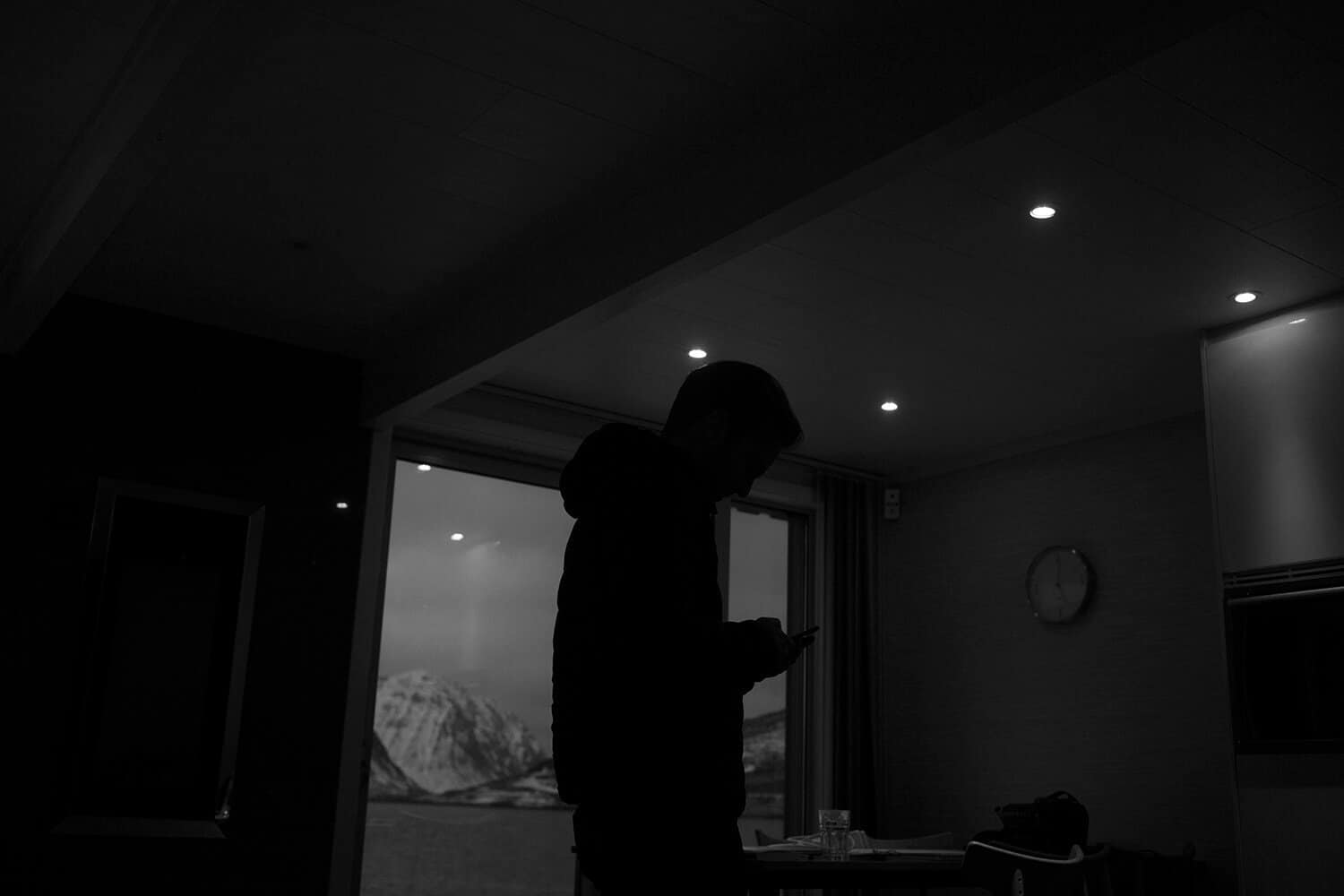 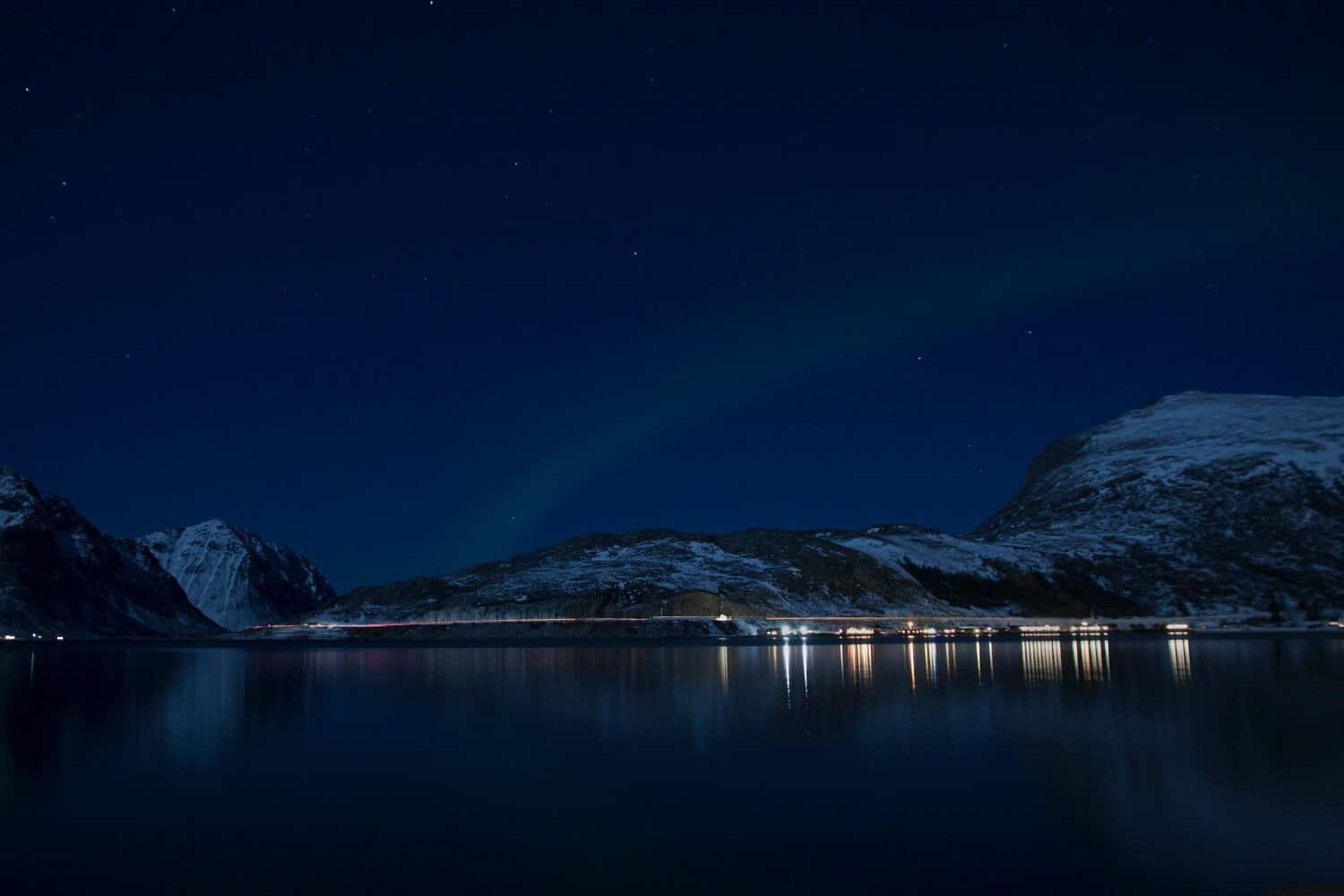 We were staying at a cabin in Leknes, Norway. This is part of Lofoten, which is a great place to see the northern lights during the winter. You also will need a clear night, where you can see the stars easily. I also recommend downloading the My Aurora Forecast app as that really helped us to know when they were happening in our area. It’s quite cold in the winter so sitting outside all night long could be pretty challenging, but the app was super helpful. Above you can see a photo of when the lights first started to appear, it’s a super faint arc over the mountains. They picked up more as the night went on.

I also recommend warm, fingerless gloves with a mitten flap—that way you don’t have to keep taking your gloves on and off to mess with your camera when the lights are happening. They are not crazy fast; each time we saw them, they would appear for anywhere from 5-20 minutes. But they do move around as light clouds that are being blown by a strong wind, so you want to be ready.

I also found that the camera had a really hard time focusing in the dark. Of course, you can use manual focus but I found this super challenging because I myself could not see that well in the dark of the night. So it was hard to know if I had the camera focused properly as well. What I did that worked best for me was to focus the camera on the horizon area, just under the northern lights, and hold the shutter button down halfway so the camera focuses but doesn’t fire. Then aim it at the space you want and take a photo. This is similar to when you photograph two people and you want both in focus, this little trick works then, too (along with having a wider aperture so more is in focus anyway). 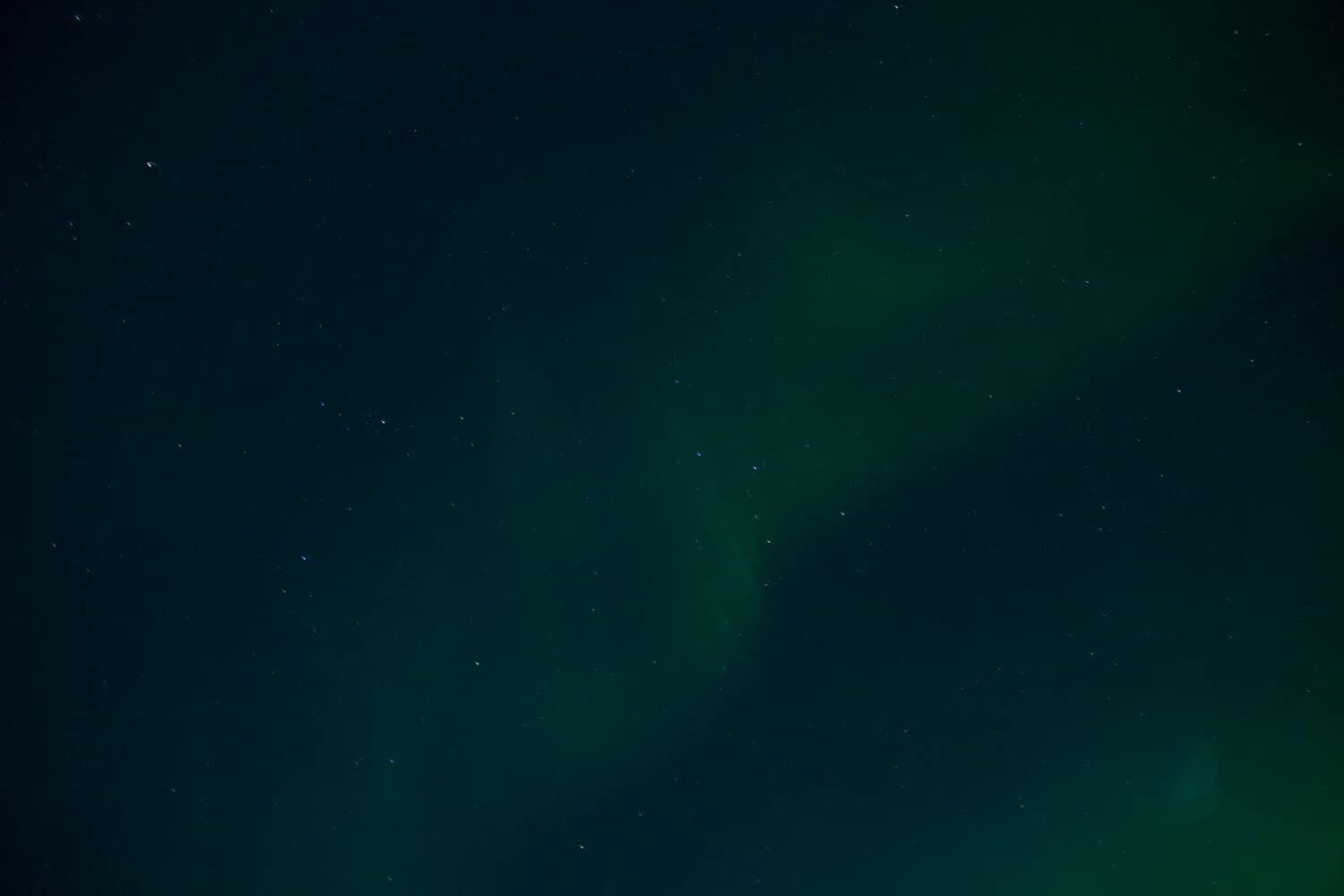 Here is a photo taken way up above our heads, no horizon in sight. I would not have been able to focus this shot at all without this little trick. But I also found that the particular night that we saw the lights, I liked the shots with some of the horizon and surroundings in the shot more. I think it gives it a little more perspective, so you better see how big the lights were in the sky. 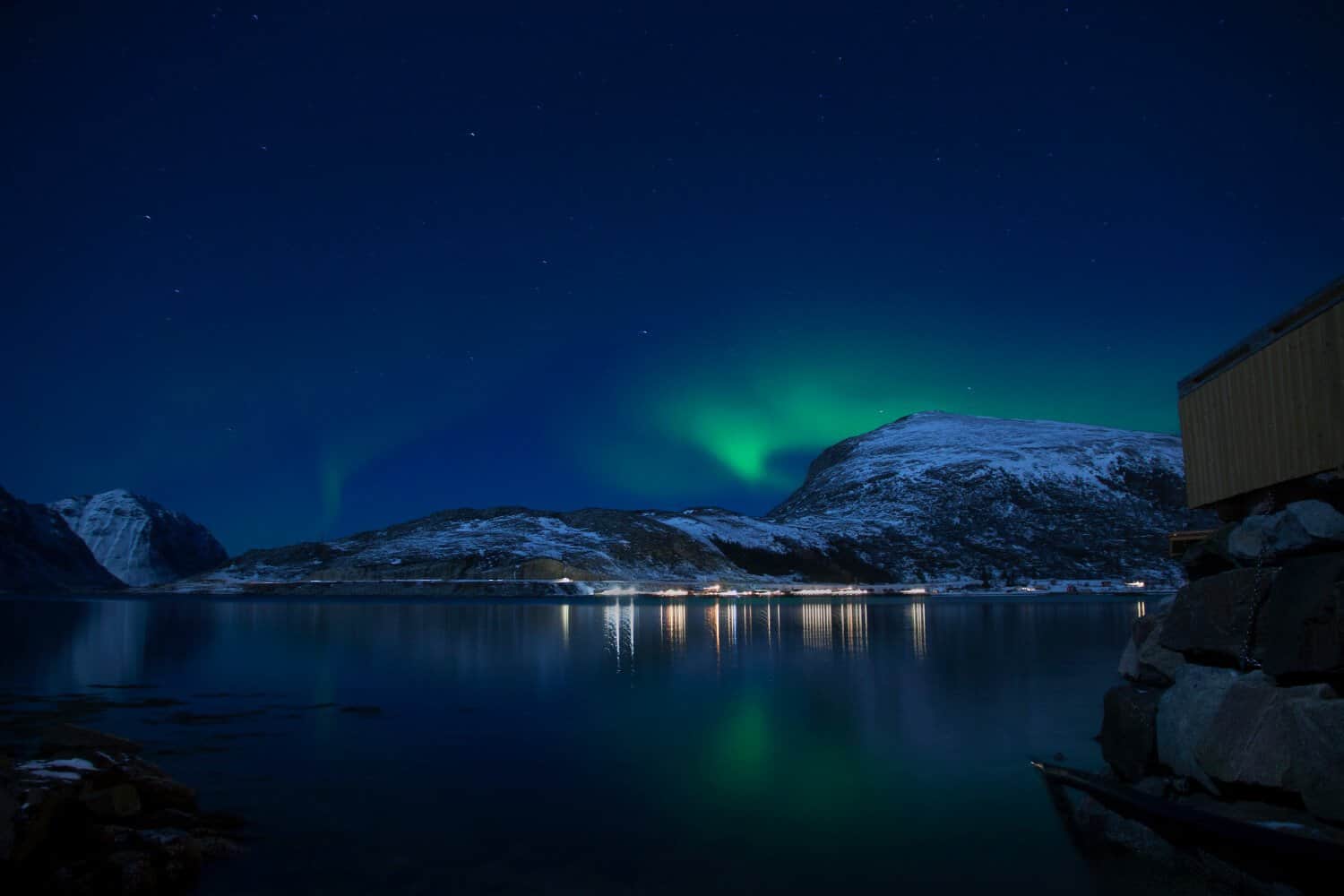 Of course, even if you’re not a photographer or have no interest in photography, I still think seeing the northern lights should potentially be on your bucket list. They are truly magnificent and just really special. I can honestly say I have never seen anything quite like them and I throughly enjoyed the experience with or without a camera (although I was glad I had one).

For any Aurora buffs out there, feel free to share more information on viewing the lights if you want! Or any photographers who want to share their experience photographing them! Would love to hear from you on the subject because I (clearly) found the whole thing super fascinating. xo. Emma

P.S. Also, if you are on Instagram, check out #lofoten because there are some REALLY amazing photos of the northern lights in there!