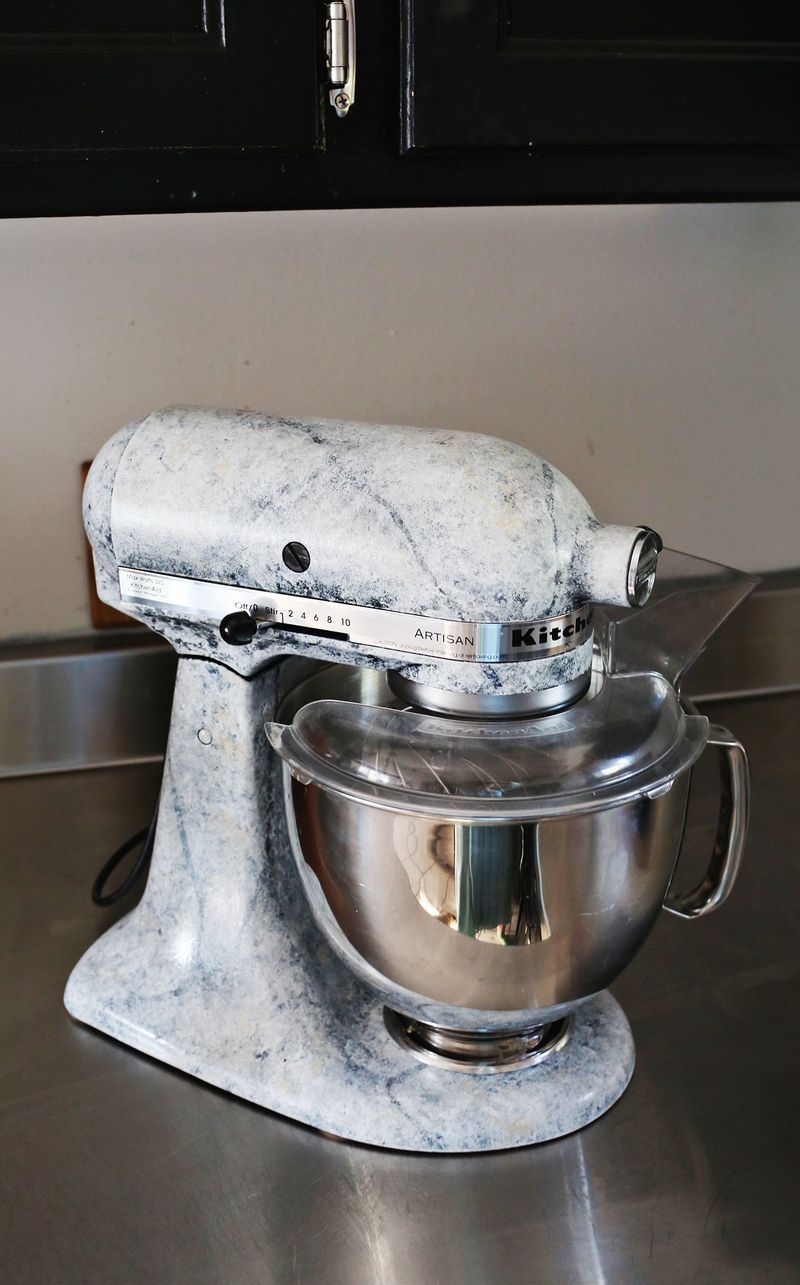 Happy weekend, everyone! Last week during a Livestream (see here if you missed it), I mentioned that I had a project "fail" to share that I hadn't found time to post yet. Well, here it is! I put the word "fail" in quotes there because I actually have mixed feelings about it (like, I don't think it's really a total fail), but it's a project that didn't turn out well enough for us to share it on ABM as a tutorial. So in that sense, I guess it's a fail.

As you can see, I painted my Kitchen Aid mixer. I was going for a faux granite look. I used a small kit from a company (that I won't mention simply because the product was good, so I don't want to associate them with my failed project) that sells paint kits for counter tops. Painting your mixer isn't something new…lots of people have done this. For example I love this simple tutorial, this one, and that one too. But I had never seen granite (or any kind of marble) before, so I thought that might be fun.

I worked on this for about half a day (maybe 3 1/2 or 4 hours) over the course of two days because I had to let the prime coat dry completely. It was sort of satisfying to take the mixer apart and give it a deep clean before starting. The faux granite paint system had four or five steps depending on whether you wanted to add veins or not. 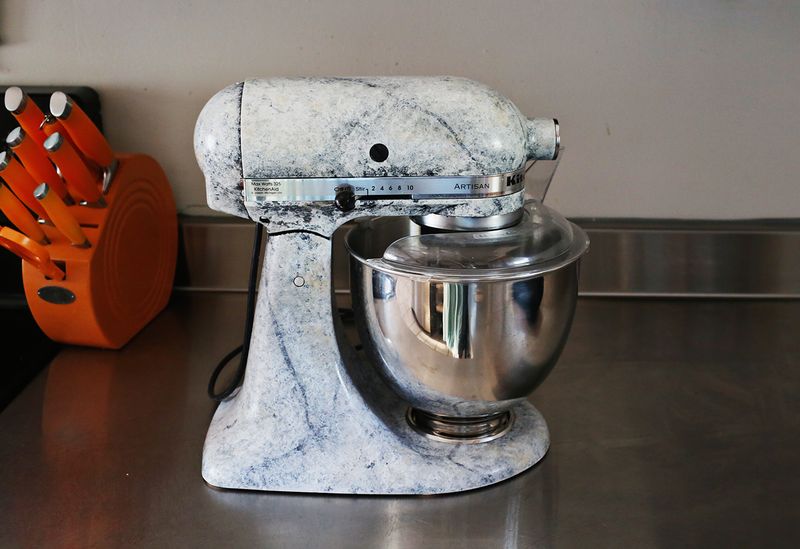 Once I finished and everything was dry, I put the hardware back on and just stared at it for a while. Hmm…does it look like granite or just like early 90s style sponge painting? I texted a few friends a photo to see what they thought. They were all nice, but the overwhelming answer was: sponge paint.

I knew before I even started taking off the hardware that this was an experiment that might not work out. And I thought that even if it didn't, I could always repaint it a solid color. So I wasn't worried about ruining my Kitchen Aid mixer for good. I actually haven't repainted it yet because I can't decide what color. And honestly, I don't hate the look of it currently. It's just not quite what I was going for. Sometimes you take a risk and it doesn't pay off like you thought it might—but if nobody dies or goes bankrupt, you're probably OK. 🙂

I've been wanting to share this project "fail" with you though because one thing we hear now and again from readers is something along the lines of, "Oh you guys never show mistakes or failures. You must never have any or you're trying to look like you don't." And of course, it's actually neither of those. We have TONS of failures in projects, recipes, products, business decisions, etc. Failure is part of being creative and certainly a part of being a business owner. Failure is a part of life. To me, it's just part of the process. It's the frustrating part, but it's nothing to be ashamed of. In fact, did you know that one of my most popular posts on this site is when I opened up about failing at my then dream (acting). We are NOT trying to hide failure or portray our lives on this site as "perfect". I mean, it's called A Beautiful Mess…emphasis on MESS, guys!

Elsie and I were talking about some past business projects that didn't work out recently as we were trying to think of good examples to share in a course we're working on. And at first we couldn't think of any, but then once we got the ball rolling, we started remembering too many. Ha! It made me realize that failures or things that just didn't work out become so much less of the story simply because we're always moving forward. I don't remember all the projects or recipes that have failed and didn't make it on to ABM because I move on and soon forget. And I think that's pretty healthy. Failures are nothing to be ashamed of, but they shouldn't define our lives. They are stepping stones to success.

OK, that was a major tangent from just showing you my sponge painted Kitchen Aid mixer. Ha! I really got off on a rabbit trail there, didn't I?! Well, anyway, for those of you who have requested seeing the mistakes and messes—here you go. I see this "mistake" everyday in my kitchen right now and I'm OK with that. 🙂 But also…what color do you think I should paint it???? I'm thinking about pale, blush pink or maybe a bright yellow. Any suggestions? xo. Emma

I like it, but im curious, did you sand to remove the original glaze/ glaze over or does paint just adhere? And how long does it last without chipping into your food ?
Thanks

I think it does look like granite but…still not sure I like it on the mixer. I mean granite is prety but for a mixer something seems kinda off. Maybe for some other surface the same texture would look just great. As for colors fopr a mixer it all depepends on the look you want and the rest of the kitchen. I’d say for modern looking maybe a red, dark blue, black, for a retro style maybe some bright colors or a pastel for a softer retro, and a shiny black with silver would be real cool for a more futuristic style but then I guess the model would not look right

I have the pistachio and I’ve loved the color for over 5 years! I think that’s saying a lot for a bright color like that!

And I agree with someone else’s comment, I thought of acid wash jeans when I saw yours, ha!

This is definitely not a fail , I absolutely love this DIY !

The mixer doesn’t look THAT bad. If it were sold in a store, I would not buy it, jsut because I always envision kitchen tools to be clean – chromes, white, black – very monochromatic.

2 – Have you seen the copper colored mixers in Williams Sonoma lately – awesome!!!!!!!

Excellent!!! it looks like marble..when I read ¨fail¨I was like where is the fail? It´s super original!

Thanks for sharing a peek behind the curtain!

my first thought was granite BUT maybe to matte? I don’t know if a shiny clear coat would make it harder to paint over if it doesn’t work but I think it needs a shine to it!!

I actually really like it! Sometime just because it doesn’t turn out exactly we are harsh on ourselves, but this resulted in a fun unique piece!

I think the mixer looks great! A complete original! And looks great against your counter top too.

I think it looks great, and not a bit like the bad 90’s sponge paintings.

I honestly don’t mind it! As long as you don’t put it near anything real granite you will be fine 🙂

Too bad it didn’t work! http://www.hannamarielei.com

I know this is a fail, and I appreciate you sharing it, but guuuurlll…this looks cool still! I’m sure it must look a little different in person, but yeah, looks like granite from here. I’ve totally felt the sting of something not turning out the way you wanted though, but like you said, you just keep moving. Great words! Thanks for sharing!

I never thought that your company “never has failures,” I think you just choose to inspire readers with the ones that work. It is nice to read this post though and that you are totally open to admitting your failures to also inspire your readers. As for the color, definitely something that’s a POP would be beautiful!

I think it looks good. I have had many “happy accidents.” Some of my favorites are things that didn’t turn out as I planned.