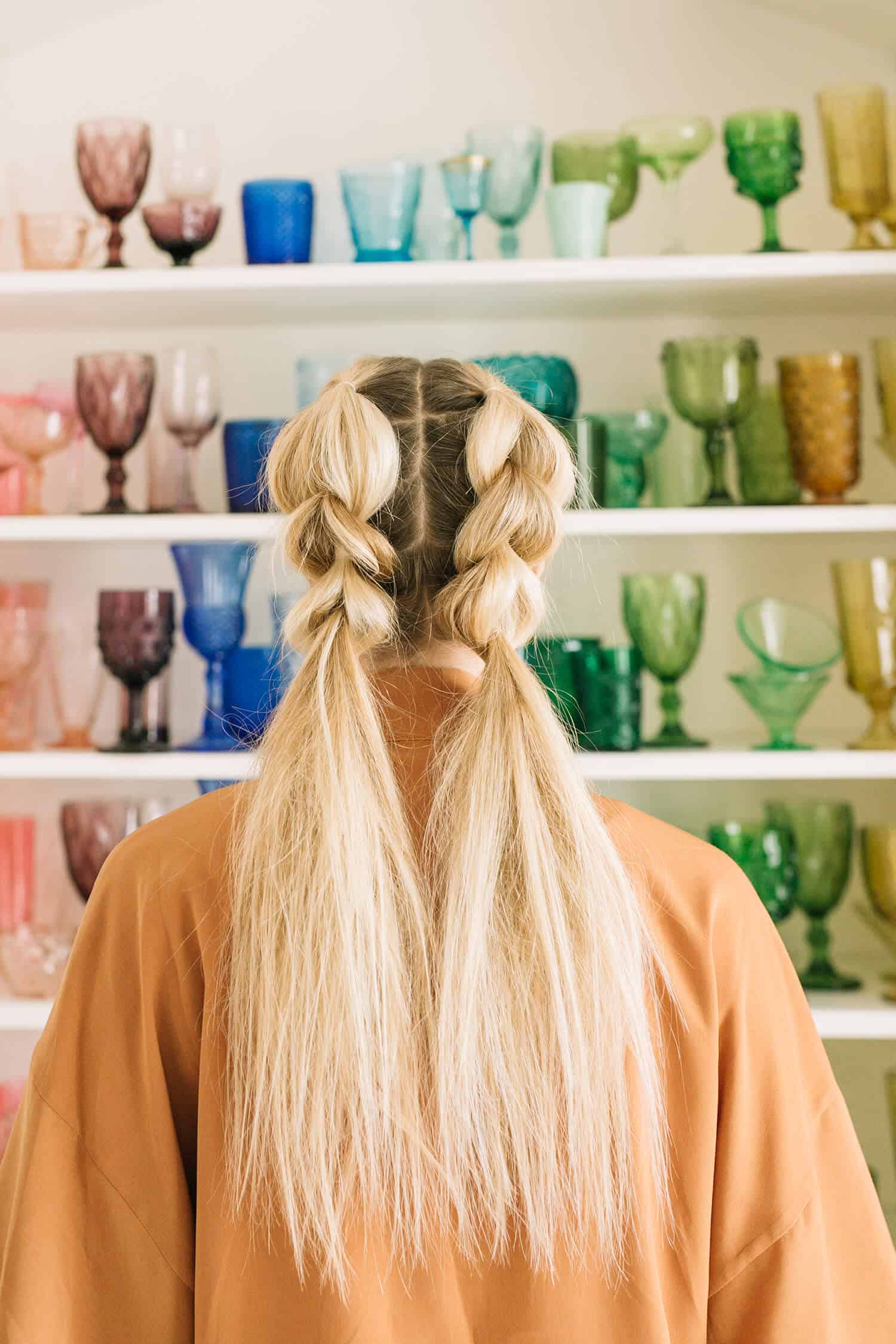 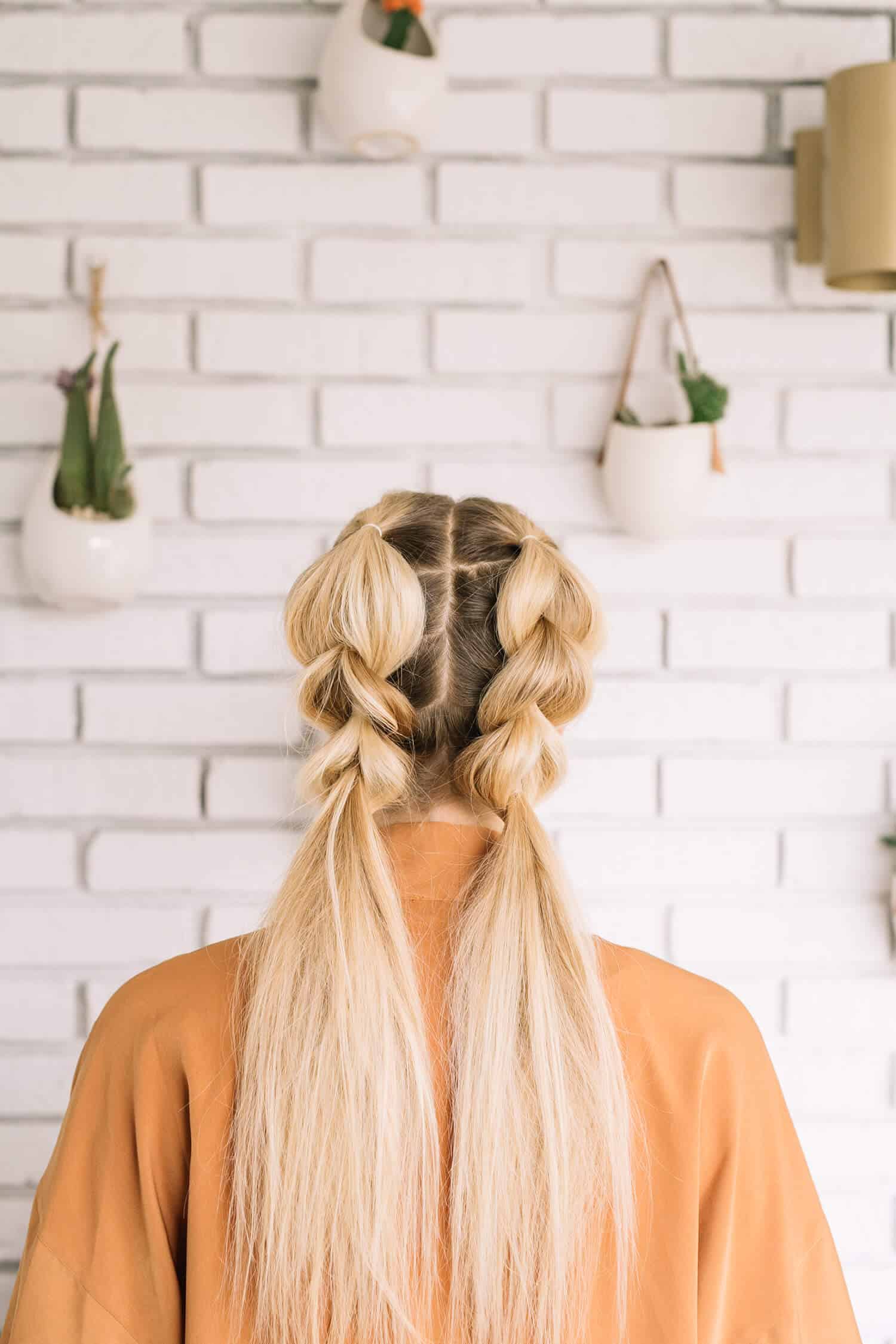 While there are lots of hairstyles that are especially pretty from the front or side view, sometimes it’s fun to do one that is a giant “WOAH” from the back as well. If you haven’t played with pull through ponytails or braids before, they are a really cool way to create a giant volume “faux braid”.

So I would definitely give it a try, especially if you have issues getting your regular braids to look as full as you would like. Here’s how to create one:

One: Start with straight hair.

Two: Part your hair straight down the middle of the back of your head.

Three: On the left side of your hair, separate the top 1/4 of your hair into a small ponytail.

Four: Separate the next 1/4 section into a ponytail directly beneath it and part your first top ponytail into two equal halves.

Five: Pull your second ponytail up between the two halves of your top ponytail and clip the second pony in that upward position so it will be out of your way for the next step.

Six: Create a third ponytail directly underneath the others on the next 1/4 of your hair and join your first ponytail halves into the third ponytail so it creates an oval frame around the second ponytail. 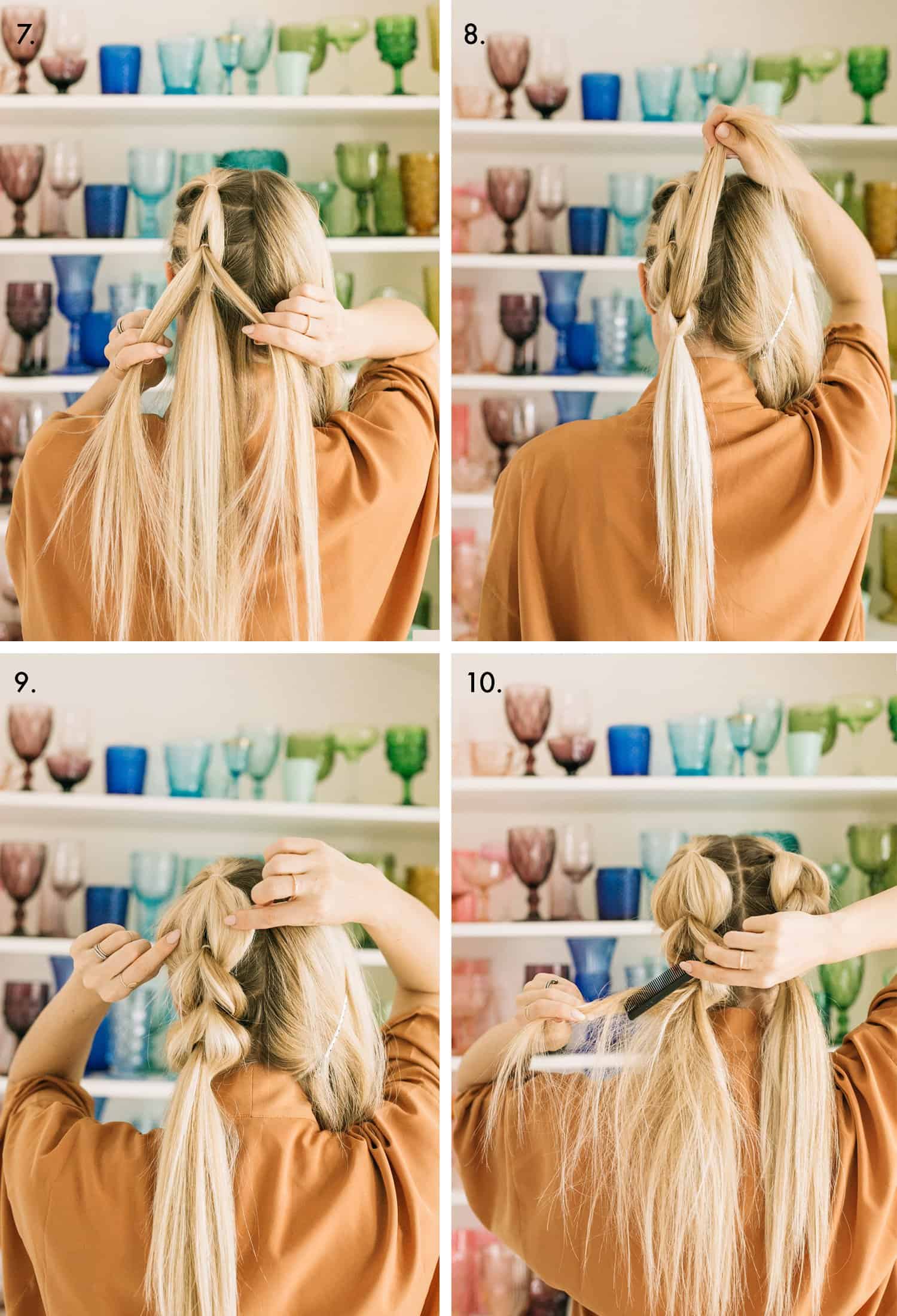 Seven: Let down your second ponytail and separate it into two sections.

Eight: Split the two sections of your second ponytail around your third ponytail and join them into a fourth ponytail with the remaining 1/4 section of hair at the bottom of your head.

Nine: Gently use your fingers to pull apart and fluff up your separated sections to create a bigger braid look, and then repeat the whole process on the other side of your head.

Ten: Lightly tease the remaining bottom half of your hair for more overall volume and spray with a light hairspray. 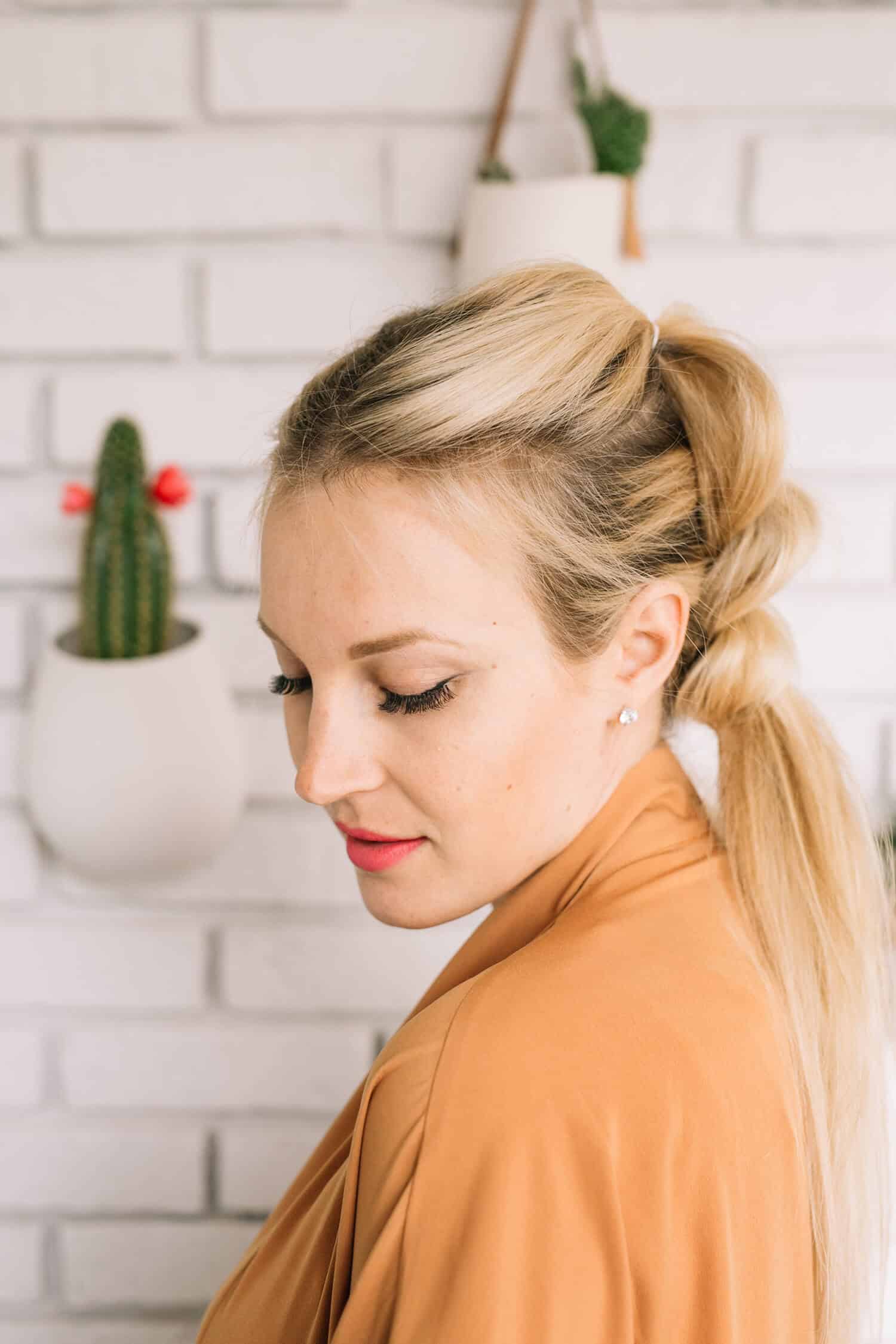 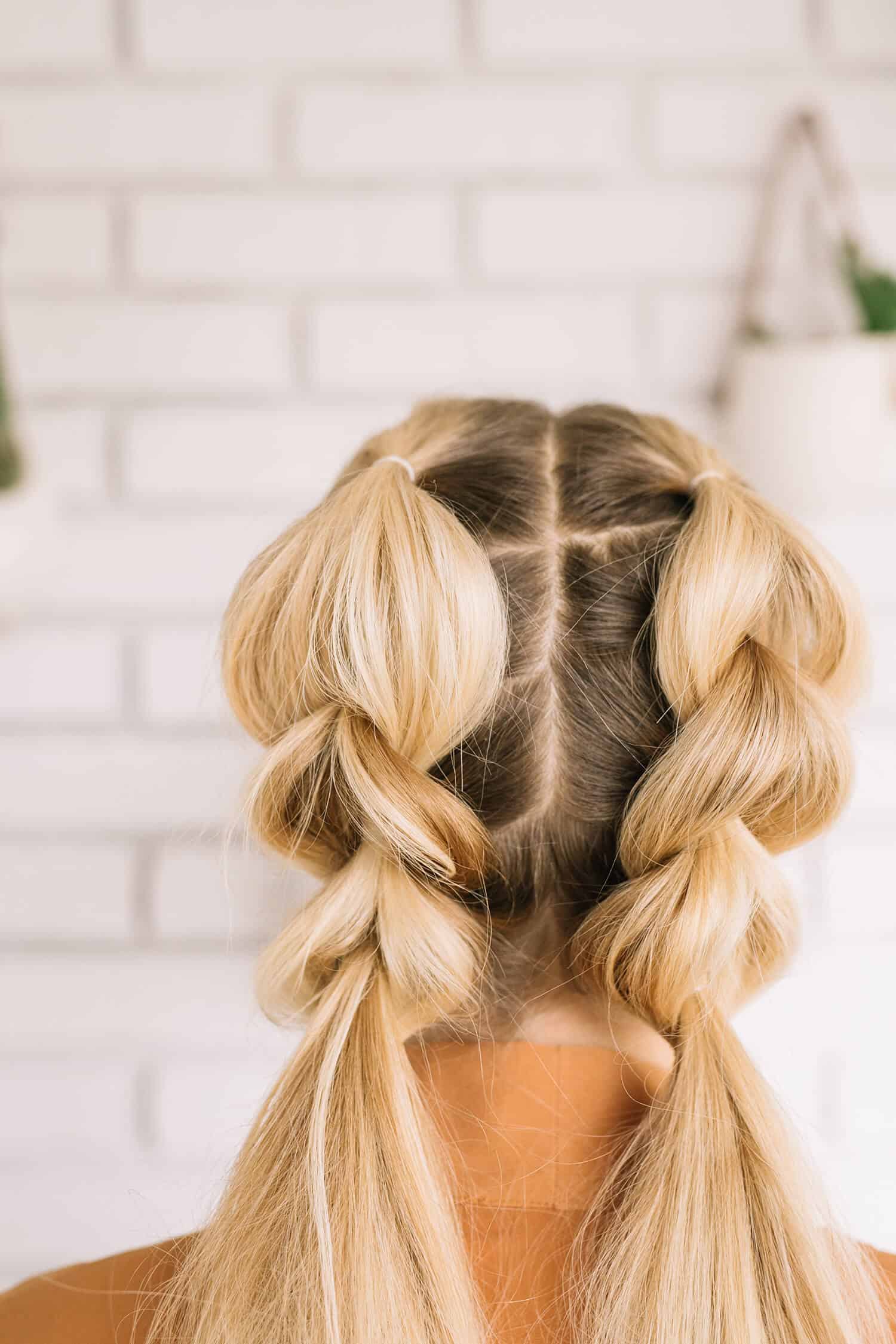 How pretty is that!? If you’re thinking to yourself, “Uh, there’s no way I can do that on my own hair!” I totally hear you.

This is one tutorial that you probably need either the double mirror setup where you can see the back of your head really clearly or maybe invite a pal over so you can get a bit of help creating all the sections.

Either way though, however you get it done, it’s sooo cool that I think it’s totally worth it, and I think you’ll agree! xo. Laura

Maybe I’m not understanding but her directions only create two loops, not three. How do you finish it off? How do you tie off the third pony?

Can anyone help with step nine? I have fairly thick hair (or, rather, a lot of fine hair) and no amount of ‘gently pulling apart and fluffing’ is creating these fat loops – I just get messy ugly bunches, with the elastics clearly visible. What’s the secret 🙁
(pic of problem: http://imgur.com/a/dyVfb)

I would love it as a ponytail as well! A chic and simple hairstyle for summer events!

I am so in love witht this kind of fake braids.

I think this would also be cute with messy buns at the bottom instead of ponies. Thanks for the inspiration!

LOVE this braid! Thanks for sharing!

I wore a single version of this for an event the other month but I love how casual two look! and so much looser than french braids.
Alicia x
www.aestheticobsessed.co.uk

As popular as braids are right now, I’ve never seen a braid like this. Love the look and texture. I agree – it would definitely be perfect for summer!

Love this hairstyle! It looks great and is effortless. Perfect for summer 😀

I can never quite get braids to work right for me, but this style is so cool! What a fun look for upcoming summer. 🙂

This is so cute and effortless looking. LOVE! ?

This looks gorgeous! Going to be trying it soon.

I’d love to do that! I just don’t have enough hair 🙁 My hair is fine, so I have about as much hair in my pony as what she’s holding up in picture 5!

I have blonde hair with darker roots like the model and I LOVE this look! Looks so voluminous and fun.

This is definite a “woah” hairstyle. Very bold!