So You Want to DIY a Shiplap Wall? 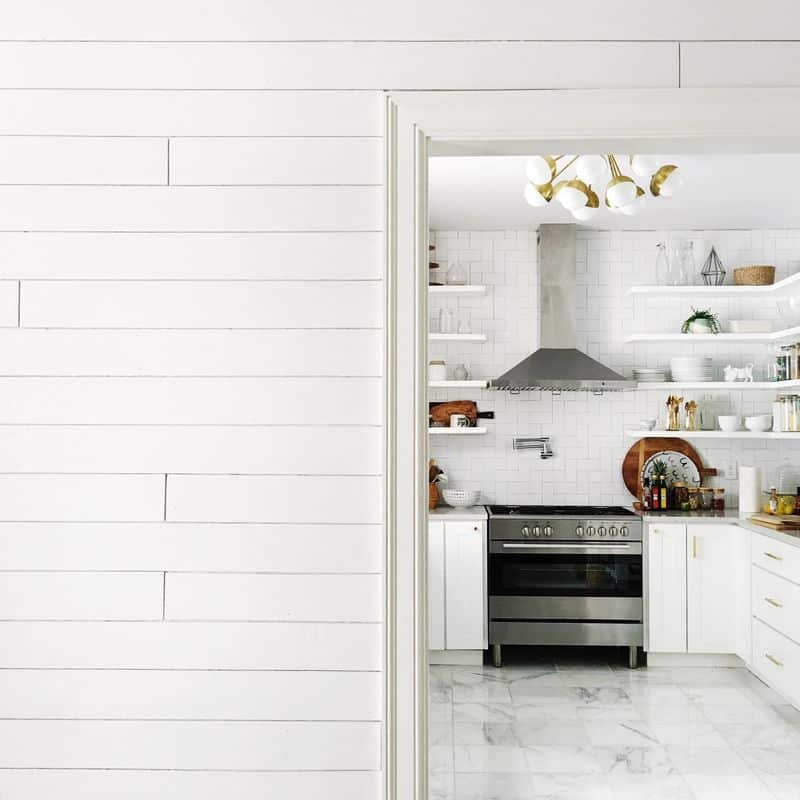 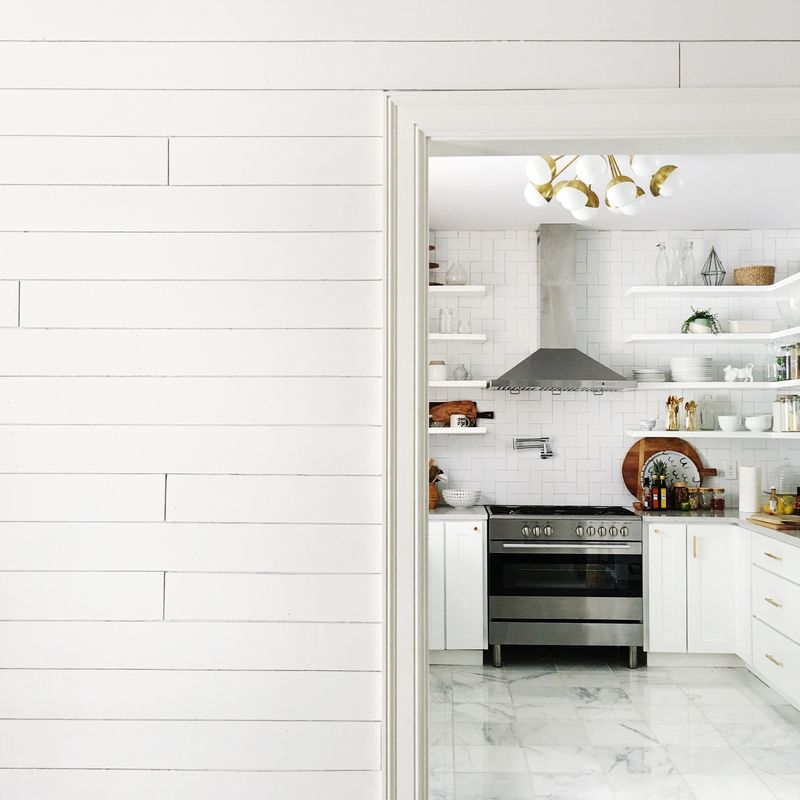 We recently had a shiplap wall installed in our den. It’s just one wall, but it adds SO much to the room and makes it feel so much closer to complete. I really love it!

I think my favorite thing about shiplap is the neutral texture it adds to a space. I also love the way it can be styled in a lot of different ways.

I was hesitant at first because shiplap is kind of famous as a go-to choice on HGTV’s Fixer Upper. And as much as I enjoy the show (Chip and Joanna are so freaking cute!!), I don’t want my house to look shabby chic or farmhouse style.

I love that style in other homes, but it’s not what I am going for in this space. So I was a little nervous that this look would clash.

With that said, the more I lived in the space and visualized the shiplap wall IN CONTEXT, the more I realized it could work. I just had to style the rest of the room in a fresh, modern way.

By the way, I’m sorry I don’t have any pulled back shots to share yet. The room is pretty far from being finished still.

Moral of the story—trust your instincts and don’t be afraid to mix styles! 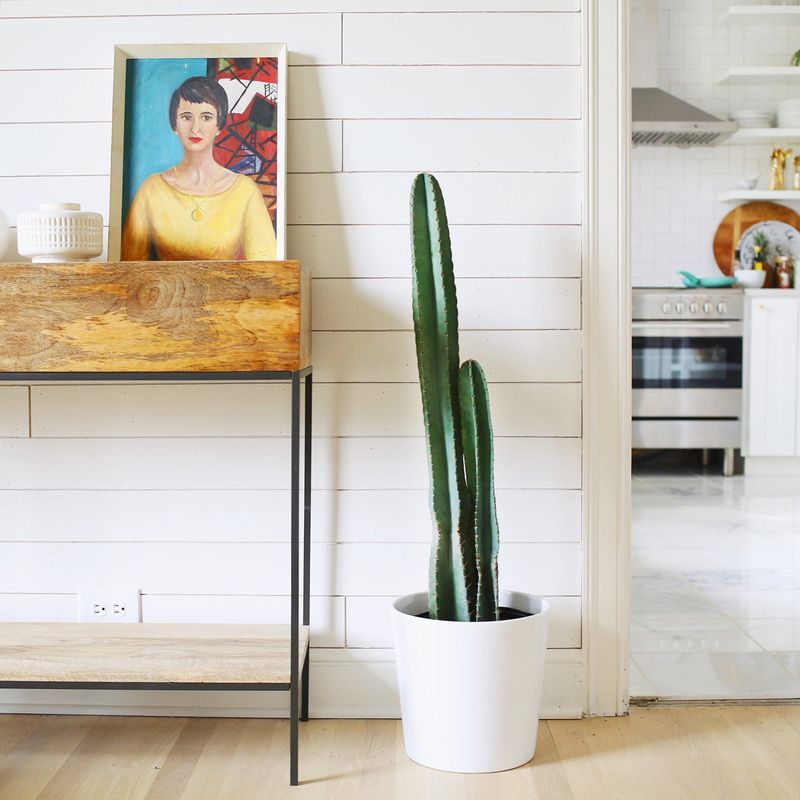 Now, I did not DIY this wall. The reason why is because I got a VERY reasonable quote back, and it just did not make sense to DIY it when I had such a budget-friendly option on the table.

So I chose to hire it out and use that time for other projects. I will say, however, that my space is small (just one wall, not a whole room), and the quote was lower because I was doing a bunch of projects with my contractor at once.

If you are doing a larger space or  don’t have access to a reasonably-priced contractor at the moment, it might very well be worth it for you to DIY your own shiplap!

If you want to DIY your own shiplap wall, follow Mandi’s tutorial here. Her kitchen backsplash cost under sixty dollars!! She did hers as a backsplash, but it easily works as a wall as well!

The only changes I would make is that you might not need to caulk your wall (I didn’t, but it’s really just a matter of taste and how deep you want the gaps to look), and I used flat paint instead of semi-gloss since mine was in a living area and not a kitchen backsplash.

-You need thin wood like lauan plywood. Do not try to do this project with 2x4s, or they will be flush with your trim (too thick) and won’t look as polished. It’s also less expensive for thinner wood.

-Lowe’s and Home Depot will cut your wood FOR YOU for a small fee. If you don’t have a saw, take advantage of that option!

-Look at Pinterest at different shiplap walls. Mine are relatively thin planks; many people choose twice as wide. Look at a lot of examples to see what you like before committing. 🙂

I hope this was helpful! xx- Elsie

I’ve been religiously watching Fixer Upper for a few months now, and every time Jo utters the word “shiplap” I get excited because of how easily it transforms a space. I love what you did here!

I love love love this shiplap trend! I can’t wait until we build our house in the spring so we can do some in our living room!

I love that I was just on the West Elm website and I said, “Hey! That’s Elsie’s house!” to the picture on their homepage!

Yes! Yes! Yes! This is what I was looking for… our new landlord has allowed us to put a back splash in our kitchen and this is exactly the look I wanted. Thank you!

Elsie, I wish you felt ok sharing the rest of your den, even if it’s not ‘finished’. In life thing are almost never ‘ finished’, and I’m not just talking about home improvement. I wonder if you don’t invite people over until your home is finished… I don’t know… Probably it’s just my PMS speaking or my design blog love must be at a low point. I am striving for some authenticity. I wish you all the best.

This looks amazing, it gives the room such a maritime atmosphere I think!
https://www.makeandmess.com/

So glad you posted this! I love that you incorporated it into a different style. Looks rad!

I love how this turned out. I could see how you’d be worried of it looking more farmhouse styled, but I think it looks great! The bright white and other elements in the room keep it more modern. It’s simple, but adds so much! I can’t wait to see the rest of the room.

I’m in the process of buying a house (if everything goes well we will close on 3/17!!) and you’ve been such a huge inspiration. I can’t wait to have more own space to decorate and style. Thanks for all your inspiration!

Mine are each 4 inches tall. I’ve seen a lot that are much larger though… just depends on the look you want!
xx- Elsie

What size boards did you use? I want to shiplap our kitchen but it’s a small space so I think smaller will be better but don’t want to go too small …. Thanks!

Thanks so much for the kind words. :)) xx- Elsie

Elsie, your new kitchen is getting beautiful! I loved your new home photos and all the ideas you have for it!I am from Brazil and follow your blog everyday.
Thank you so much for the daily inspirations.

It’s funny you mentioned Fixer Upper – we’ve only just started getting that show on free to air tv here in Australia and I’ve really enjoyed seeing the amazing transformations on the episodes I’ve watched so far. I’m definitely looking forward to seeing your completed den and how you work the ship lap into your style – the glimpses you’ve given us into your home so far are gorgeous!