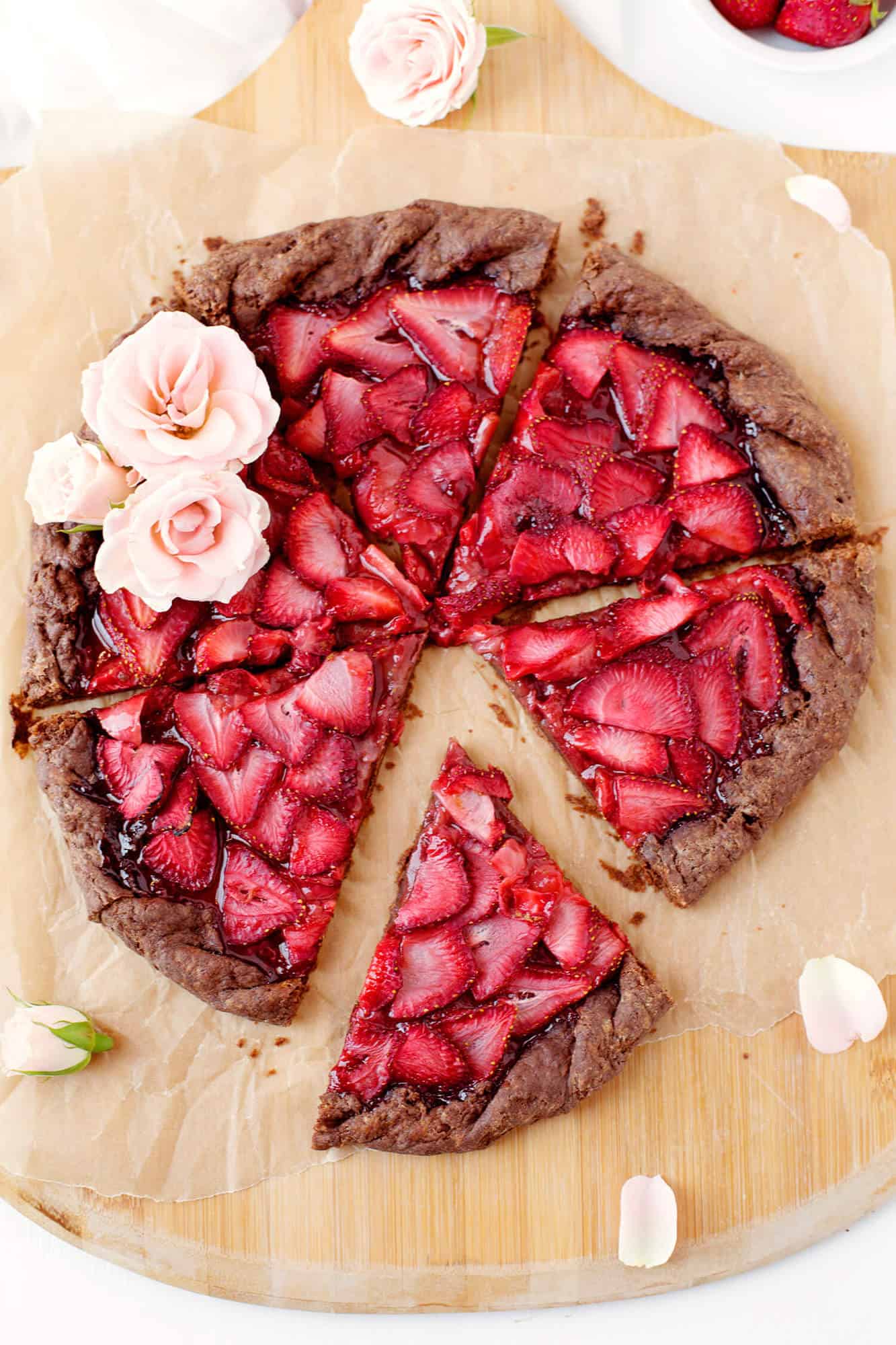 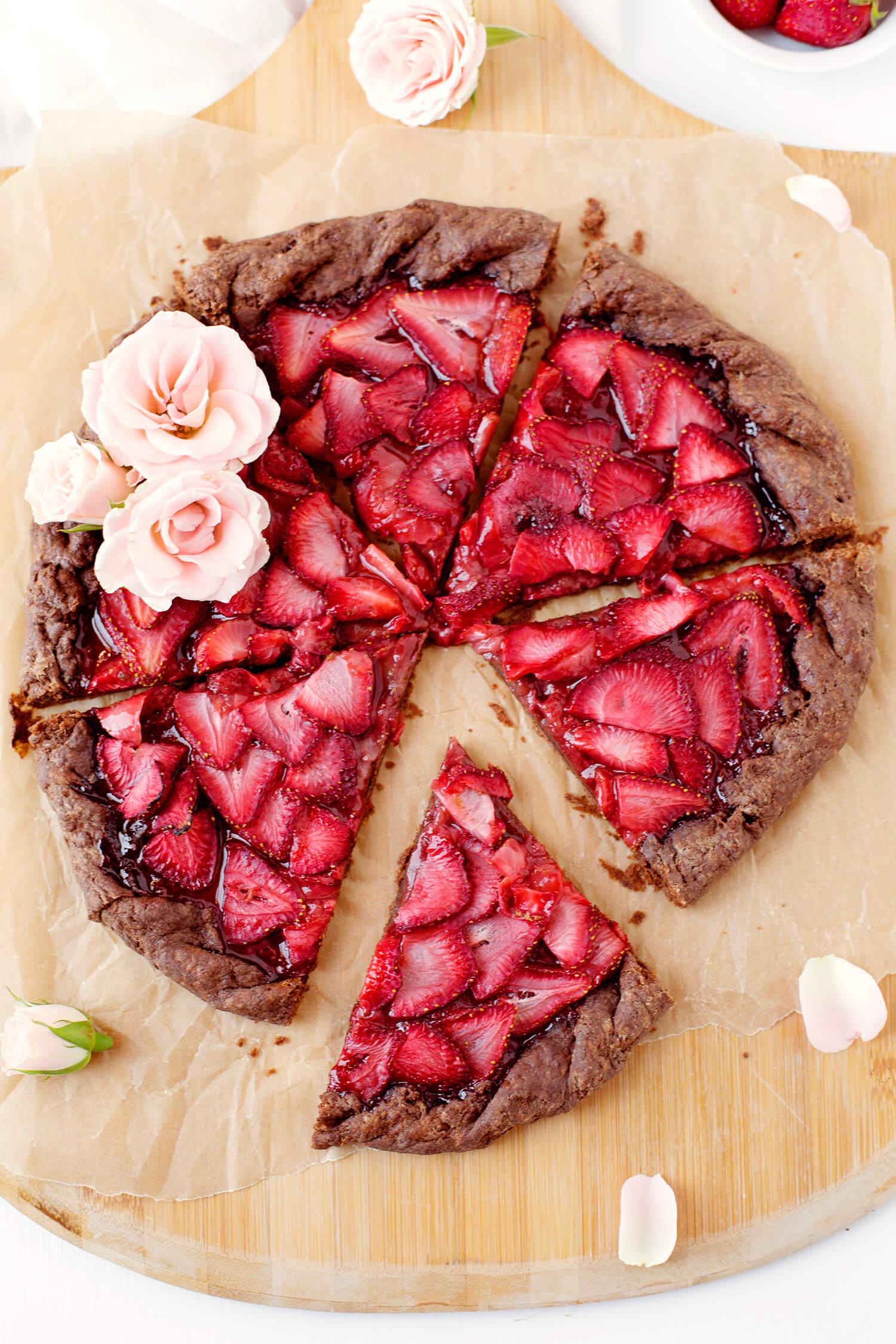 Just the mention of strawberries and champagne makes me think of Pretty Woman. Which quickly turns into me reminiscing about movies I grew up watching (mostly because it’s what they’d play on TV, like before Netflix and all that). Some of my favorites included: Pretty Woman (as I already mentioned), Pretty in Pink, Say Anything, Footloose, The Beverly Hillbillies and for reasons I cannot fully explain, Crocodile Dundee (which now that I think about it has a lot in common with The Beverly Hillbillies).

I guess I like romance and people who don’t quite fit in. Hmm. Let’s not analyze that too much. 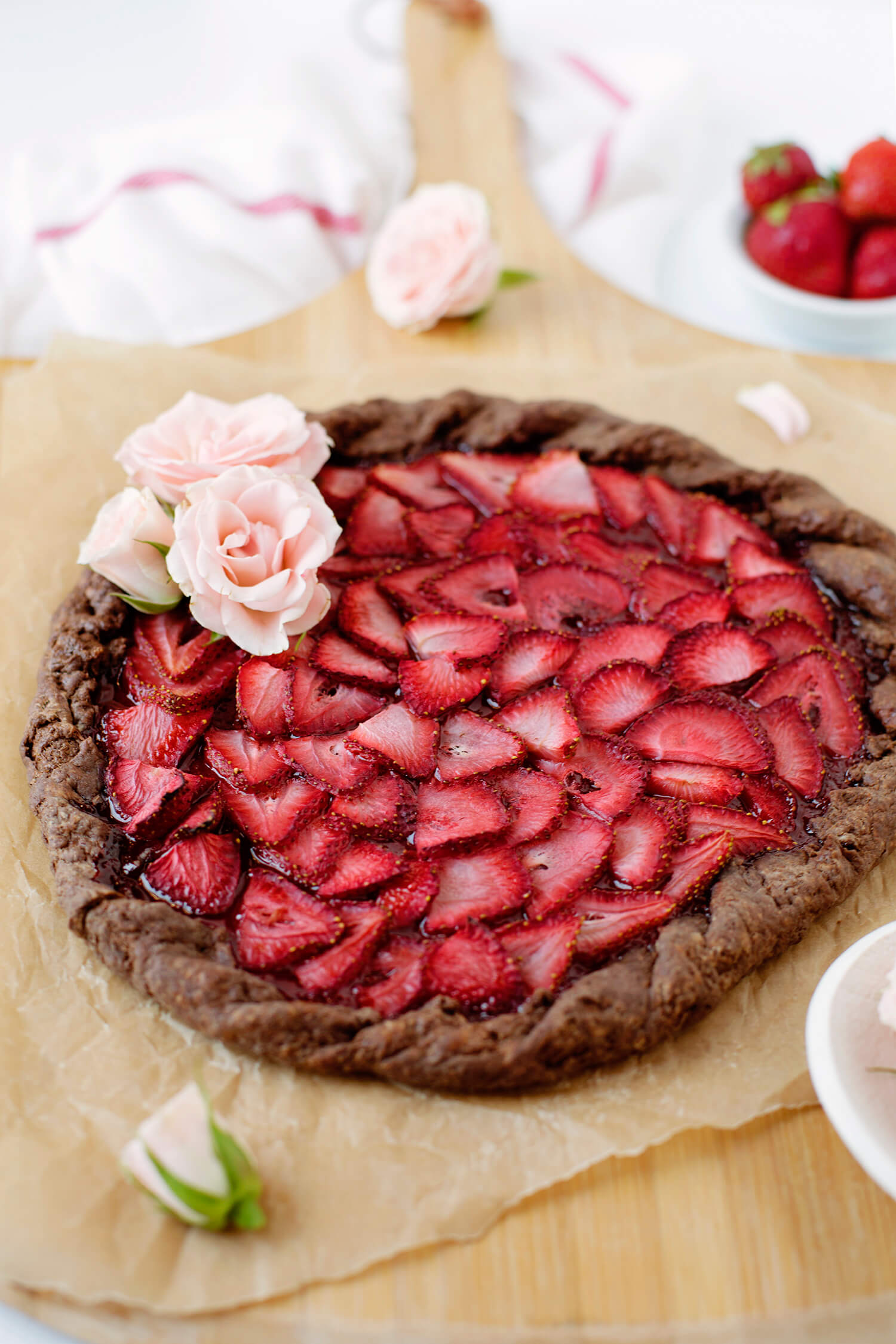 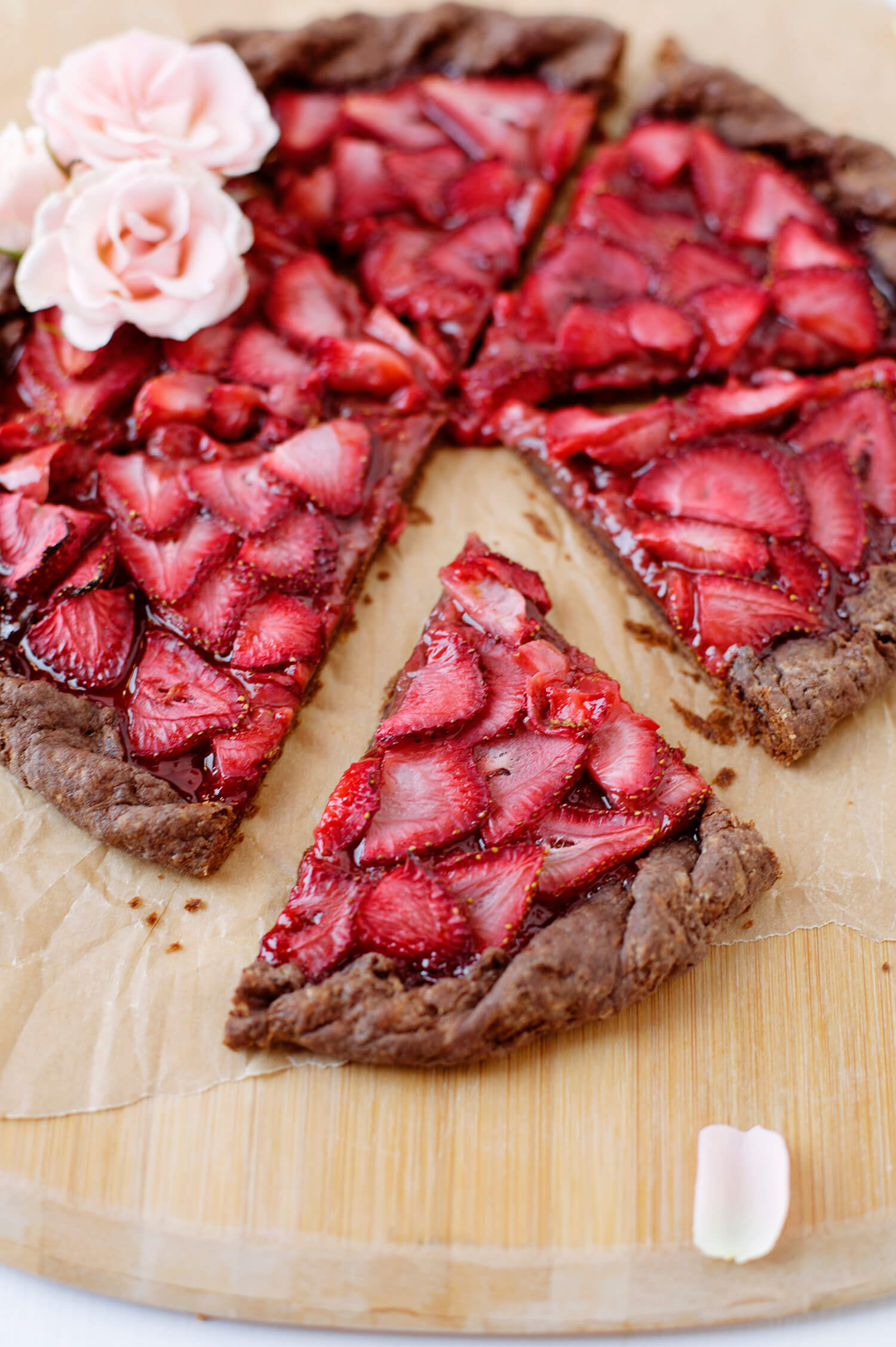 Old movies aside, this galette (or you could call it a free form tart if that feels better to you) does boast strawberries and champagne among its ingredients. But the most prominent flavor would have to go to the chocolate crust – you know I love chocolate! The cocoa gets a flavor boost from a shot of espresso. Now that I’m explaining all this, maybe it sounds a bit too fussy? Well, I promise it’s not. It’s just as easy, if not easier, than making pie. Plus we’re gonna make some extra strawberry and champagne jam to enjoy later on, so it’s almost like this galette comes with a sidecar or something. 🙂 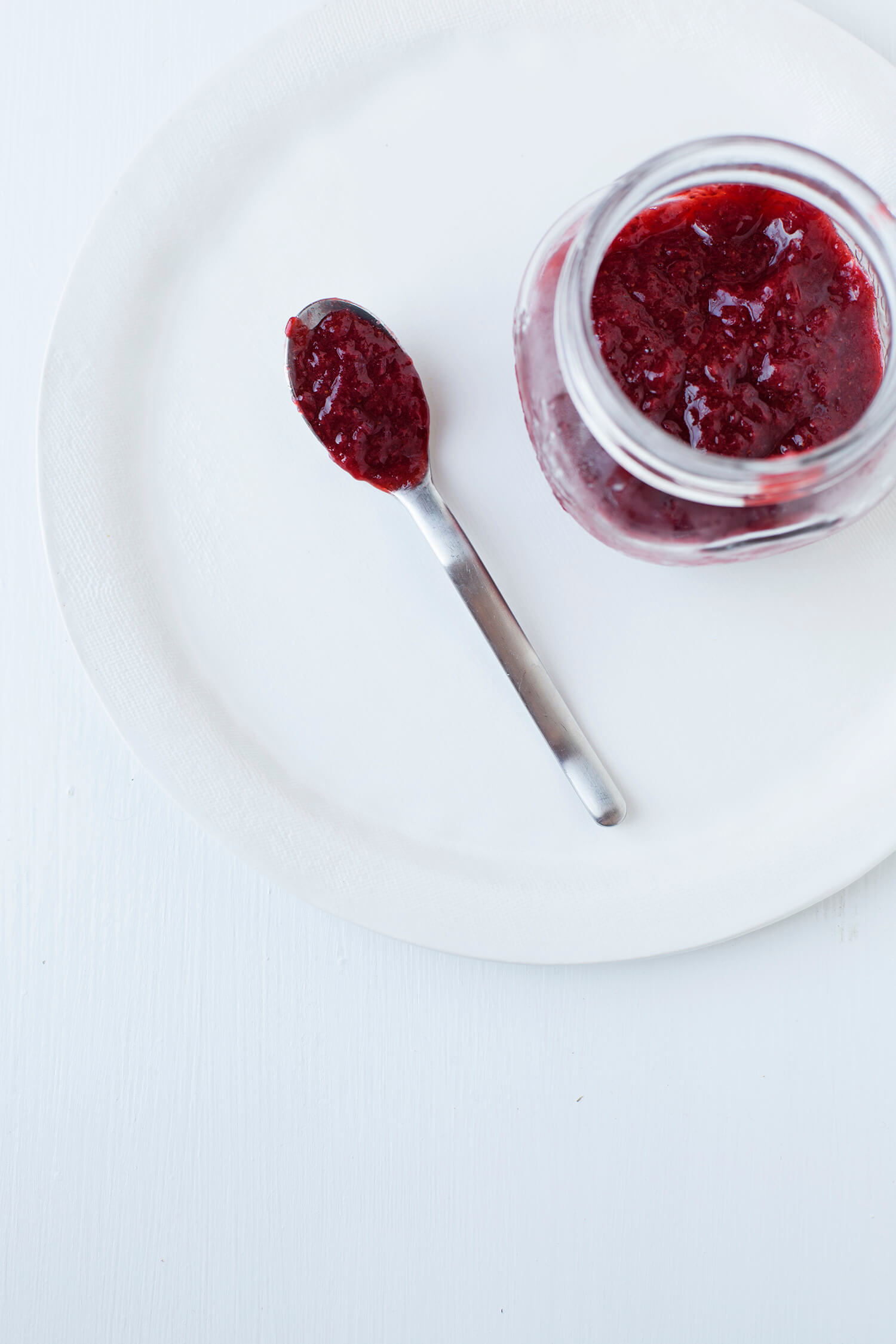 Strawberries and Champagne Galette with a Chocolate Crust. Makes one galette and a heaping cup of jam.

To make the crust, first make a shot of espresso and pour it over ice. I used my Nespresso to do this, but you could also buy instant espresso powder and follow the directions for that if you don’t have any kind of home espresso maker. (I get it, you hate homemade lattes. :)) Allow that to just sit and cool and also melt some of the ice while you complete the next steps.

Combine the flour, cocoa, sugar, and salt in a large mixing bowl. Add the 1/2 cup cold butter cut into cubes. Use a pastry blender or your (clean) hands to blend the butter in with the dry ingredients until the mixture resembles very small pebbles. You don’t want the butter to melt at all during this process, so if it’s warm in your house, one trick is to place your dry ingredients in the freezer (in the mixing bowl) for 15-20 minutes to help keep everything cold as you work. Now add the espresso. Measure so you get 6 tablespoons of liquid. My espresso shot plus melted ice only came to about 5 tablespoons so I added an additional tablespoon of water. Do what you need here to get the right amount of (cold) liquid. Stir and press together until a dough ball forms. Press into a disk, cover in plastic wrap, and refrigerate for at least an hour or overnight. 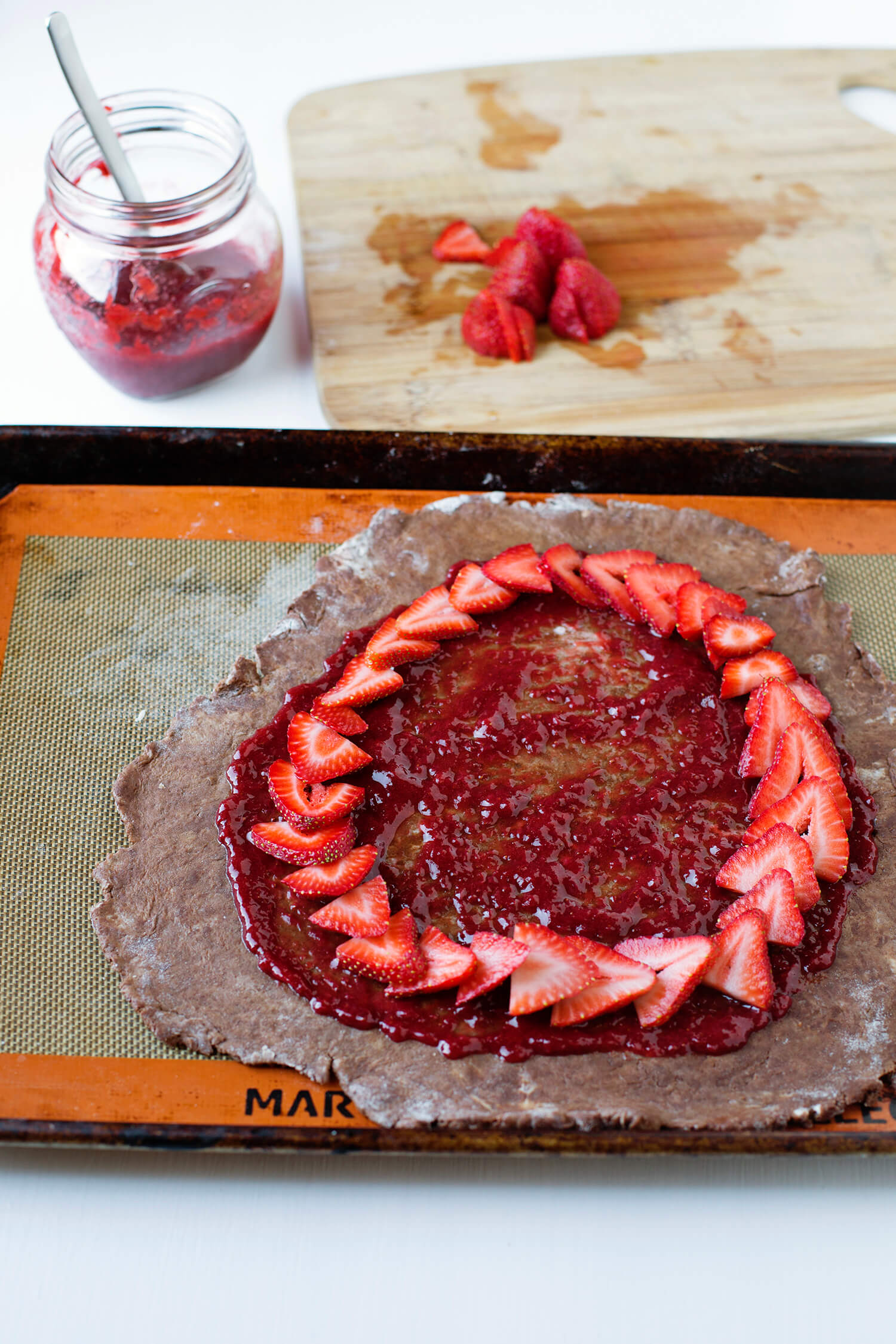 To make the jam, cut the tops (with the leaves) off the strawberries and also cut each in half. Combine the strawberries, champagne, sugar, and vanilla extract in a small pot. Cook over medium to medium/low heat (so it’s just bubbling but not a rolling boil) for about an hour, stirring occasionally. You don’t have to hover over the pot, but do give it a stir every now and again so nothing sticks to the bottom, especially in the beginning while the sugar is melting into the mixture. The jam will break down and then reduce some. Once it’s quite thick (see photo above), remove from heat and place the jam in a bowl to cool. If you aren’t baking your galette that day, you can store this in an airtight container in the refrigerator for up to two weeks.

You won’t use all the jam in the galette, but it’s quite delicious (and not overly sweet, which is how I like my jam). So if you are going to all that trouble, why not make enough so you can enjoy it on morning toast for a week or two. Plus it’s difficult to make smaller batches than this, so I feel this is the best option. But if you want to try to make a smaller batch, be my guest. 🙂 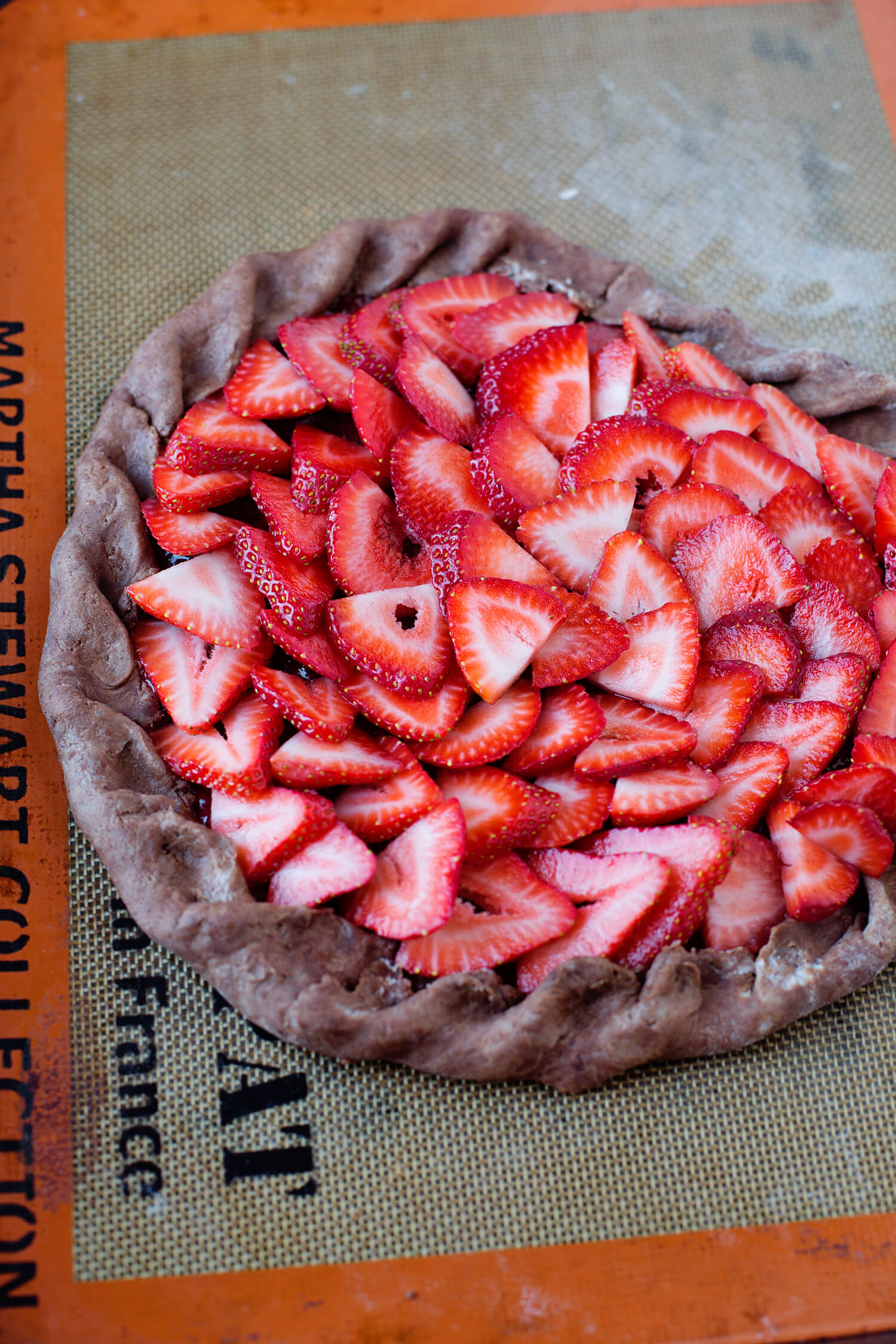 Roll out the crust, top with about 1/4 cup jam, and a layer of sliced strawberries. Roll up the edges of the crust. Then bake at 375°F for 45-50 minutes. Allow to cool for 10-15 minutes before slicing into pieces. 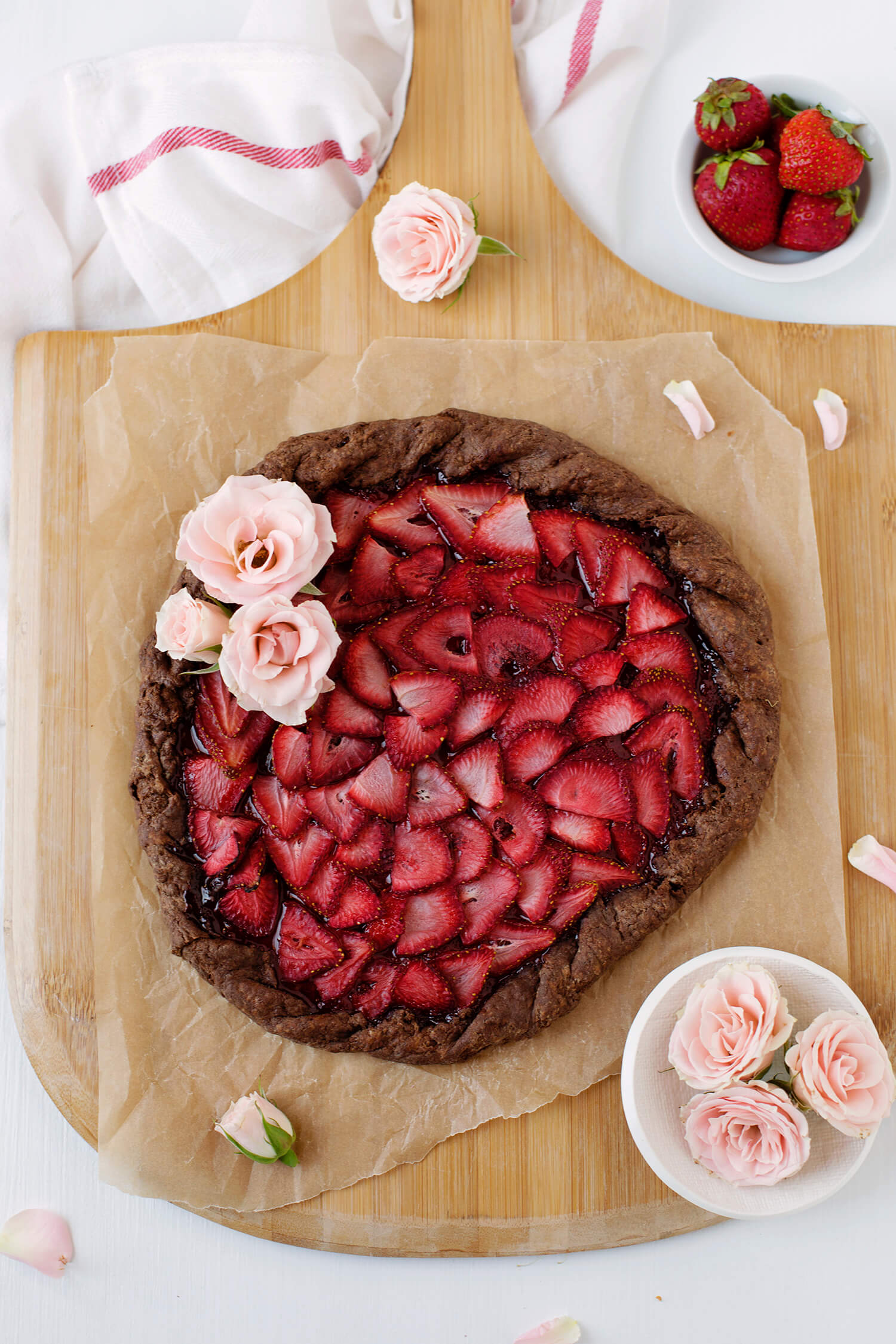 This galette has some really rich and interesting flavors, but it’s not super sweet. So feel free to top with powdered sugar or a scoop of vanilla ice cream if you like. Enjoy! xx. Emma