Todd’s Home Studio (Before + After!) 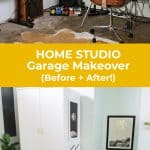 Yay, this is so exciting for us! We’ve been in our Nashville home for 3.5 years now, and one of the huge things on our “must have” list when we were house hunting was a space that could be a home recording studio for my husband, Todd. If that sounds familiar to Elsie’s shopping wishlist for Jeremy’s music needs, well, it’s because Elsie and I only know each other because our husbands have been pals for 16 years now, and were in the same band for six years or so back in the day. So we’ll forever have the “musician husband” thing as a part of our lives. Anyway, we bought our current house because it had a semi-detached one-car garage that we knew we could make over into Todd’s creative space. But as you can see from the below photos, it was a bit of a challenge, to say the least! Todd was actually a bit mopey about the room for a long time when we first moved in because he was having trouble believing it would ever look decently cool, and it took him a while to finally realize that it was going to be a great space for him in the end.

As you can see from the before photo, it looked and felt like a garage storage space to the max when we first moved in—just taking out all the heavy built-in shelving and automatic garage door unit was a project in and of itself before we could really start the makeover. The whole house had a bland feel to it (you can see all the before photos here) and this room was no different. We painted the room a pale mint (it’s Valspar Neon Mint) to give it a hint of color, and did the ceiling black so there would be a high contrast and help the two brass light fixtures I chose to stand out. 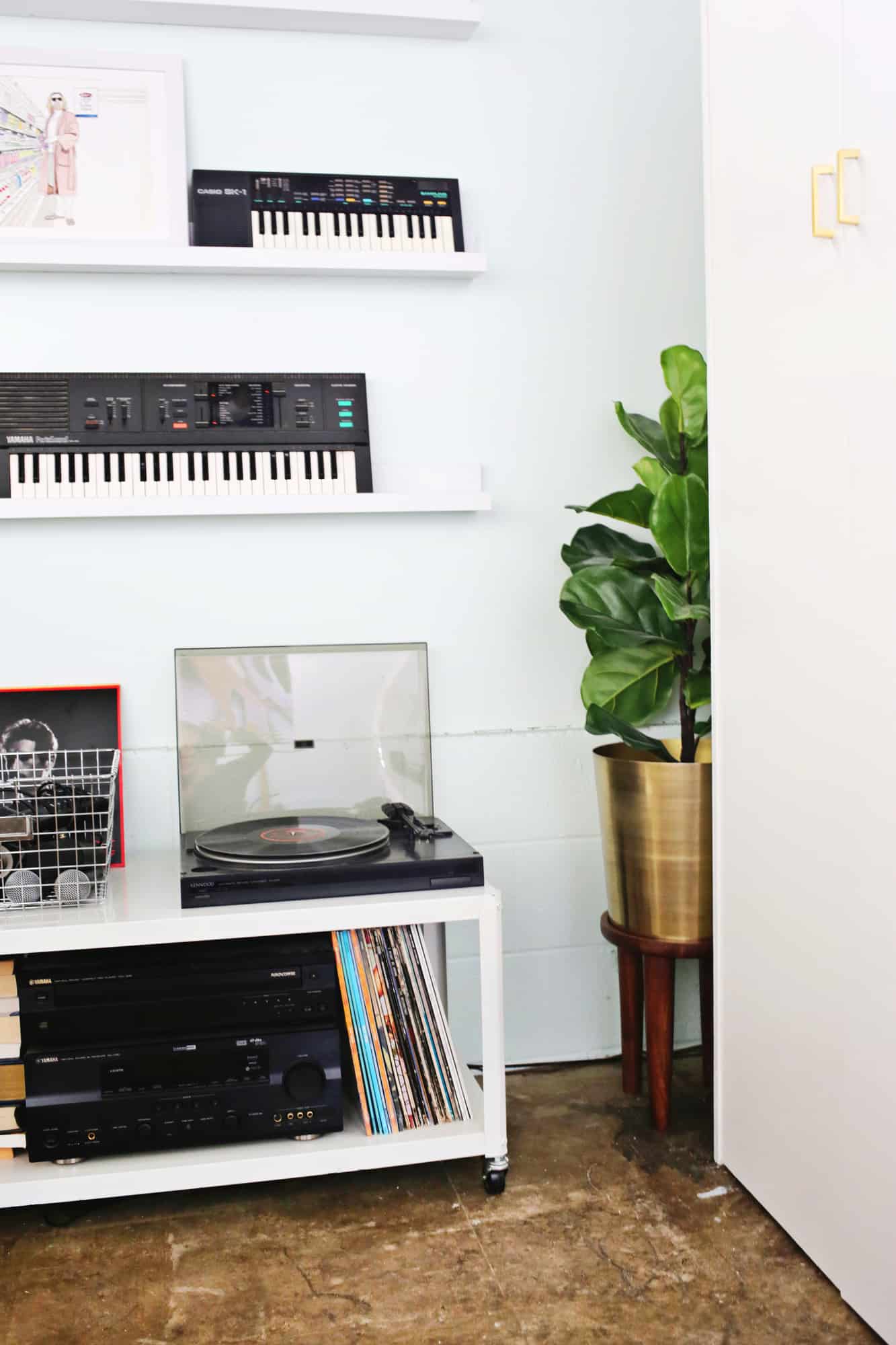 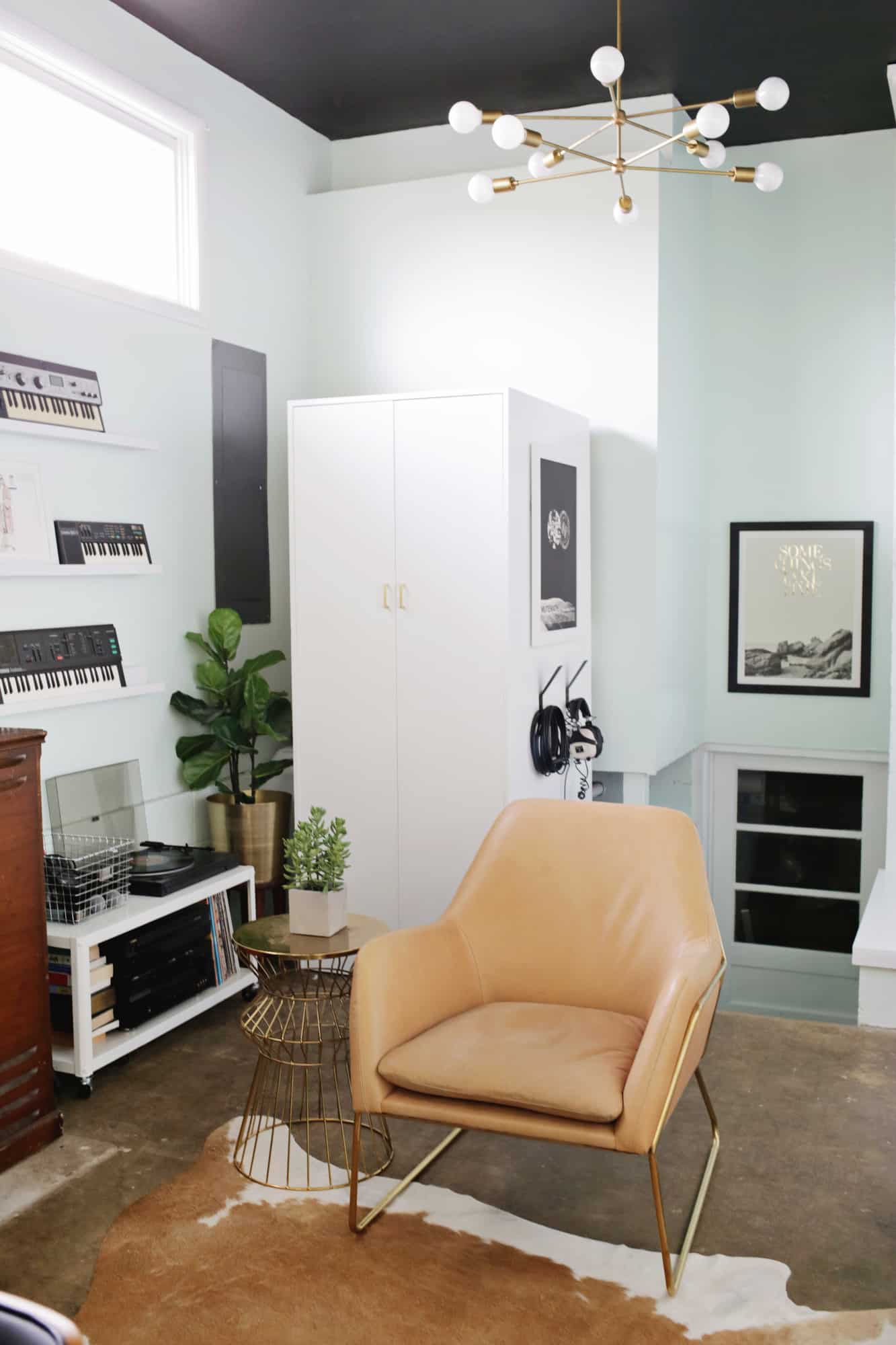 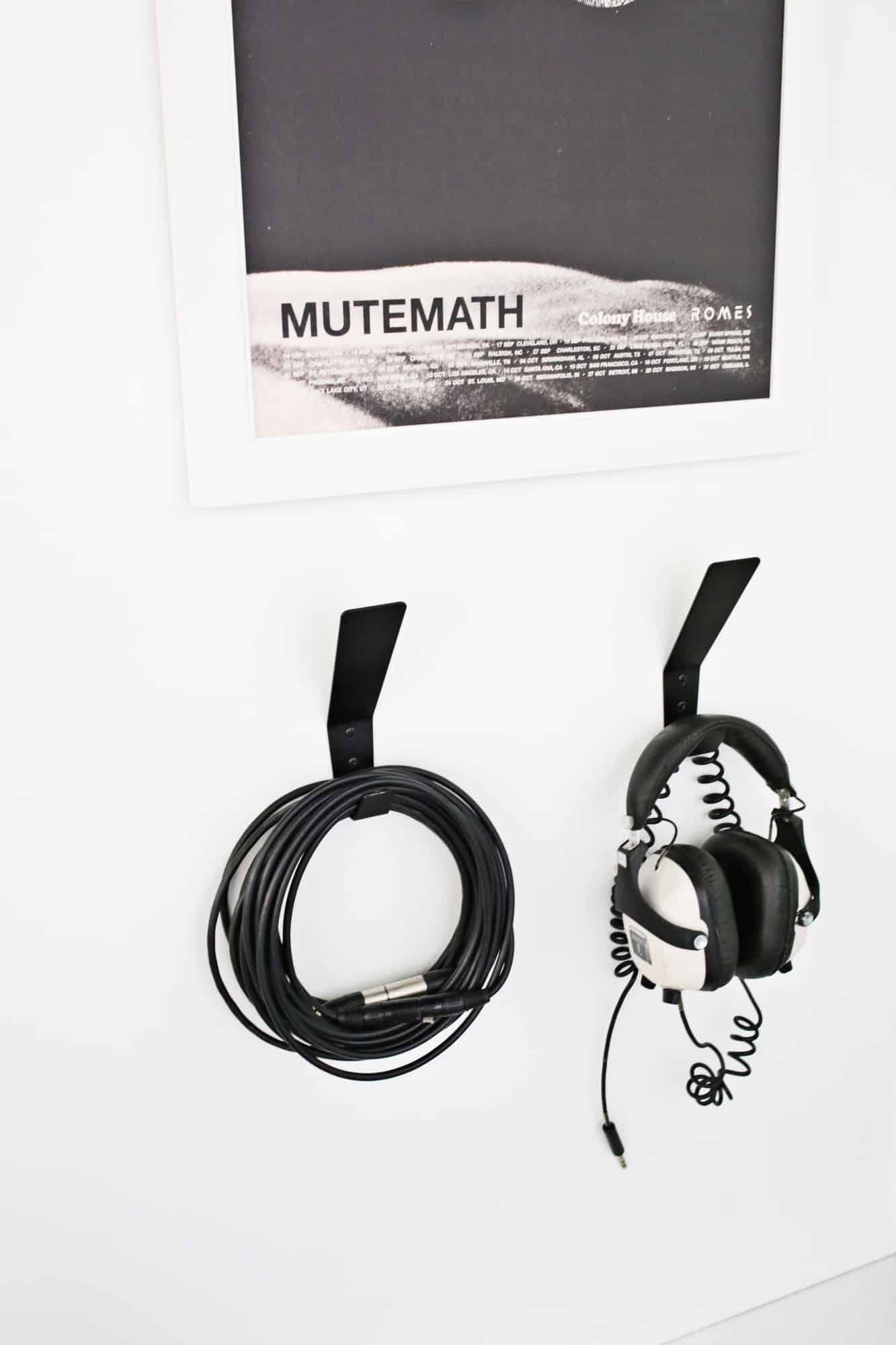 Todd was a member of Mutemath for the last seven years, but now he’ll be producing new projects from home. So that was another reason I wanted to get this space wrapped up for him soon. I think your environment can be very inspiring or distracting, so I wanted to make sure he could feel at home and creative in this space. 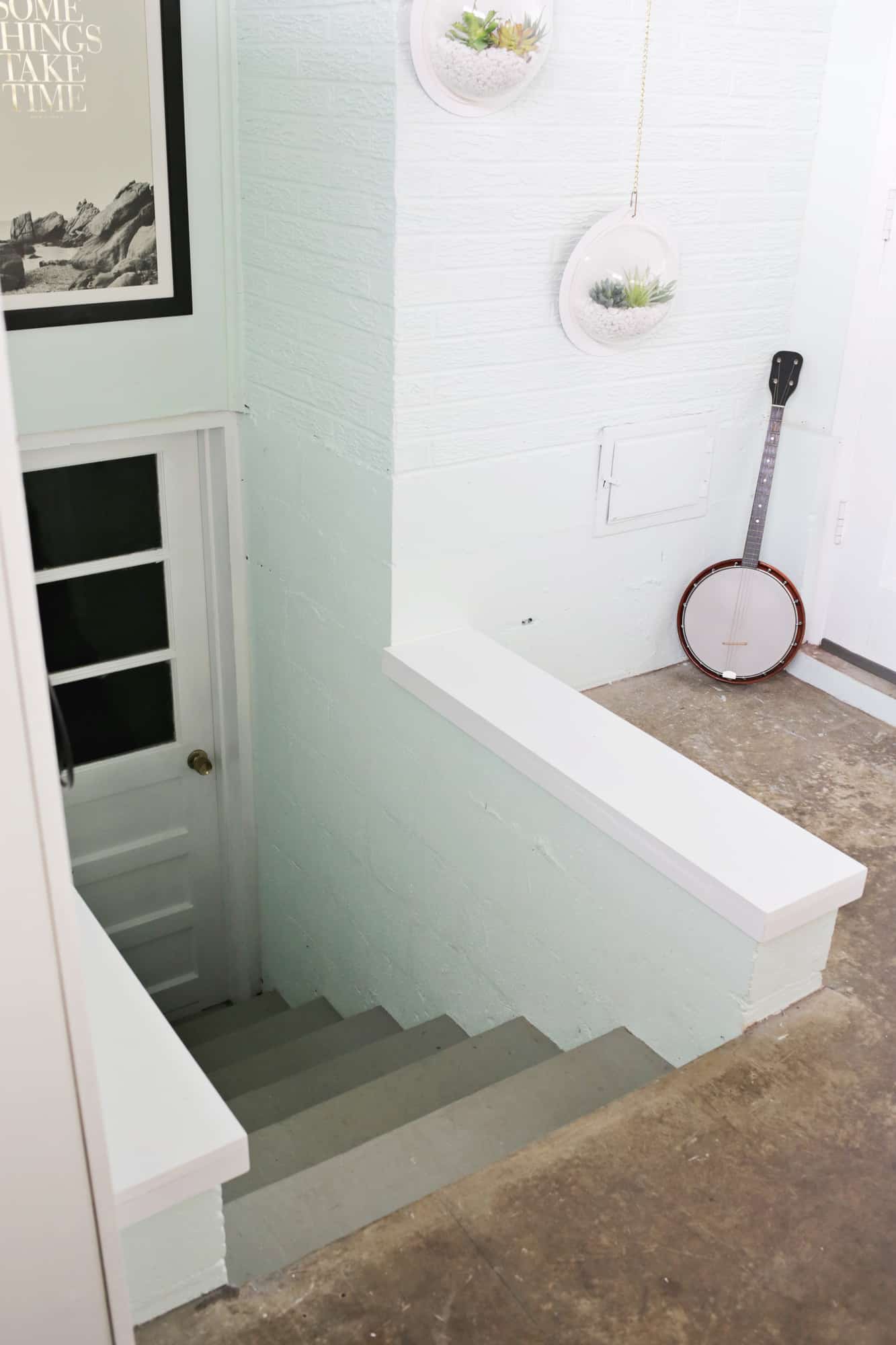 We also added some trim in places to frame the top of the fireplace and cinderblock stairway and it gives the space more of a finished look. It feels sooo much nicer since adding those little details in!

Since our house is a smaller ’60s ranch, the original laundry closet inside the house is too small to fit modern washer/dryers, so the previous owner moved the hookups to the garage—and that’s where we decided to keep them, too. In order to make sure the space still felt like a studio when needed for clients and writing sessions, we built this cabinet to hide the washer/dryer (tutorial coming soon!) and you can’t tell at all that it’s a laundry area when the doors are closed—it’s great! 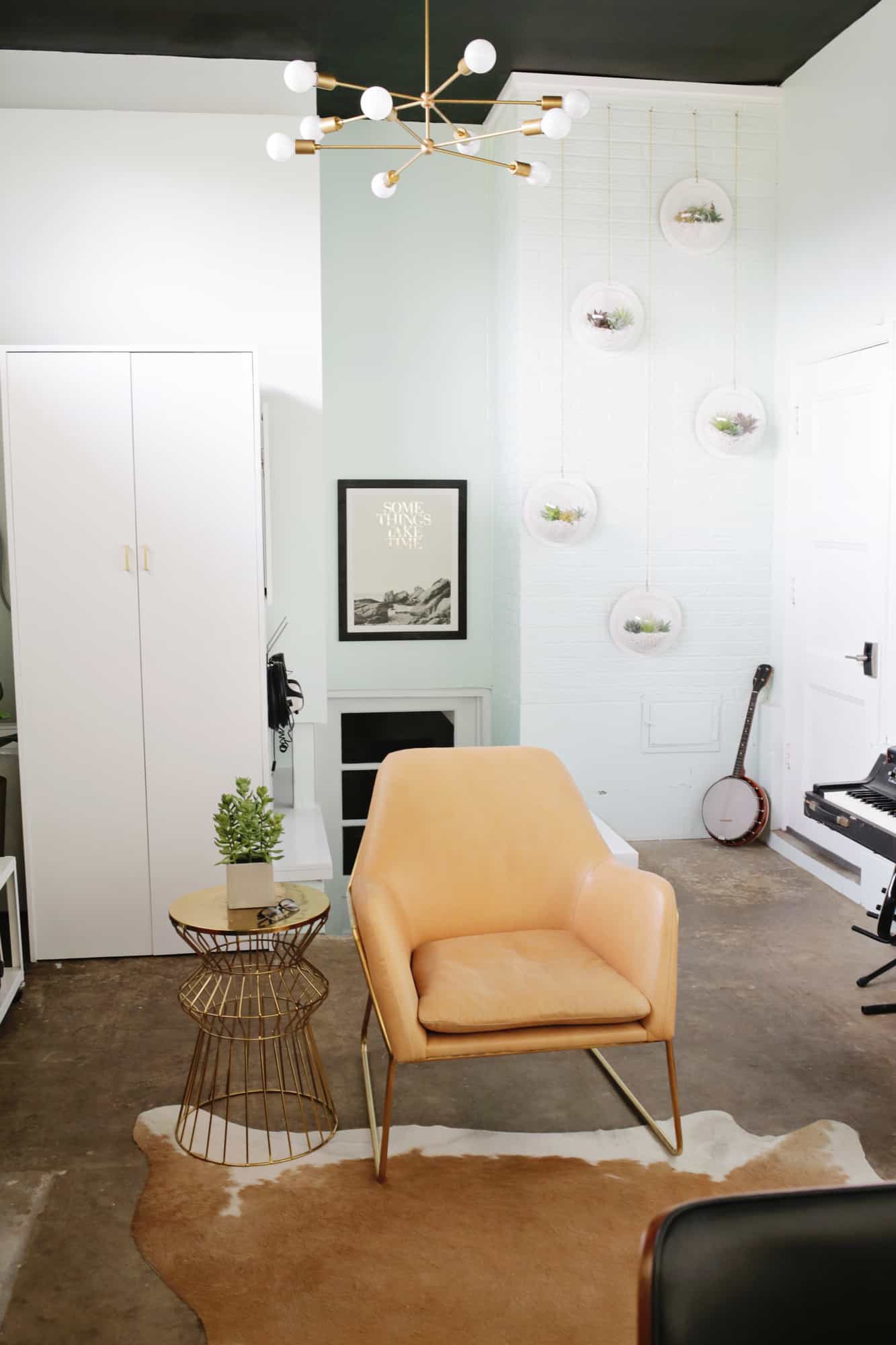 When deciding what kind of a chair we wanted for Todd’s studio, I knew I wanted something sleek and clean that also matched the mid-century vibes of the home as well as the studio color scheme—and this Article chair was perfect for the spot! The creamy brown leather ties in the camel color of the rug and the gold frame matches the gold accents in the space perfectly. 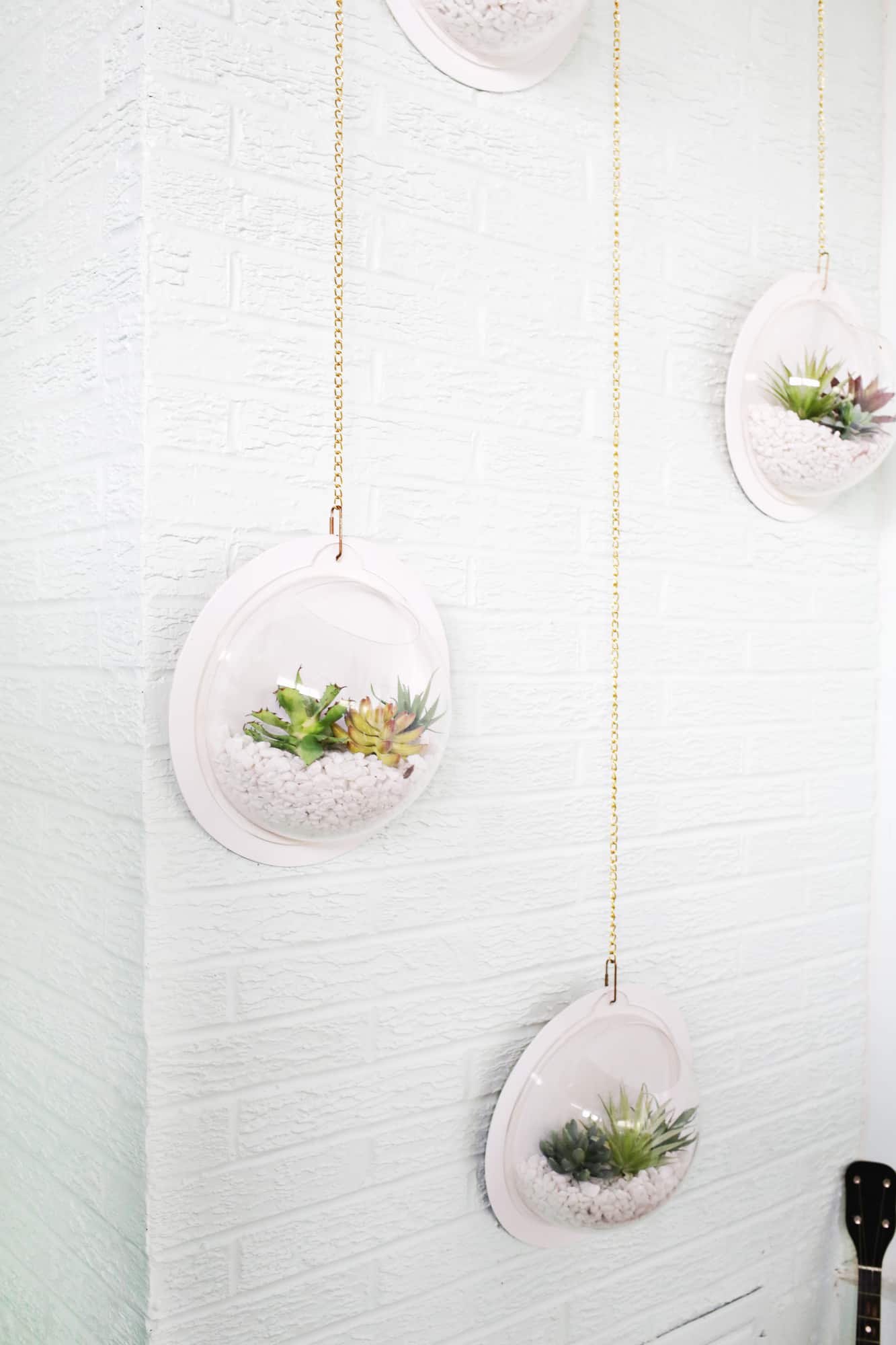 To add a little bit of greenery to the far wall, I did several hanging planters that I made out of fishbowls and used faux succulents since it would be the biggest pain to try and get up there to water them all the time—no thanks!! 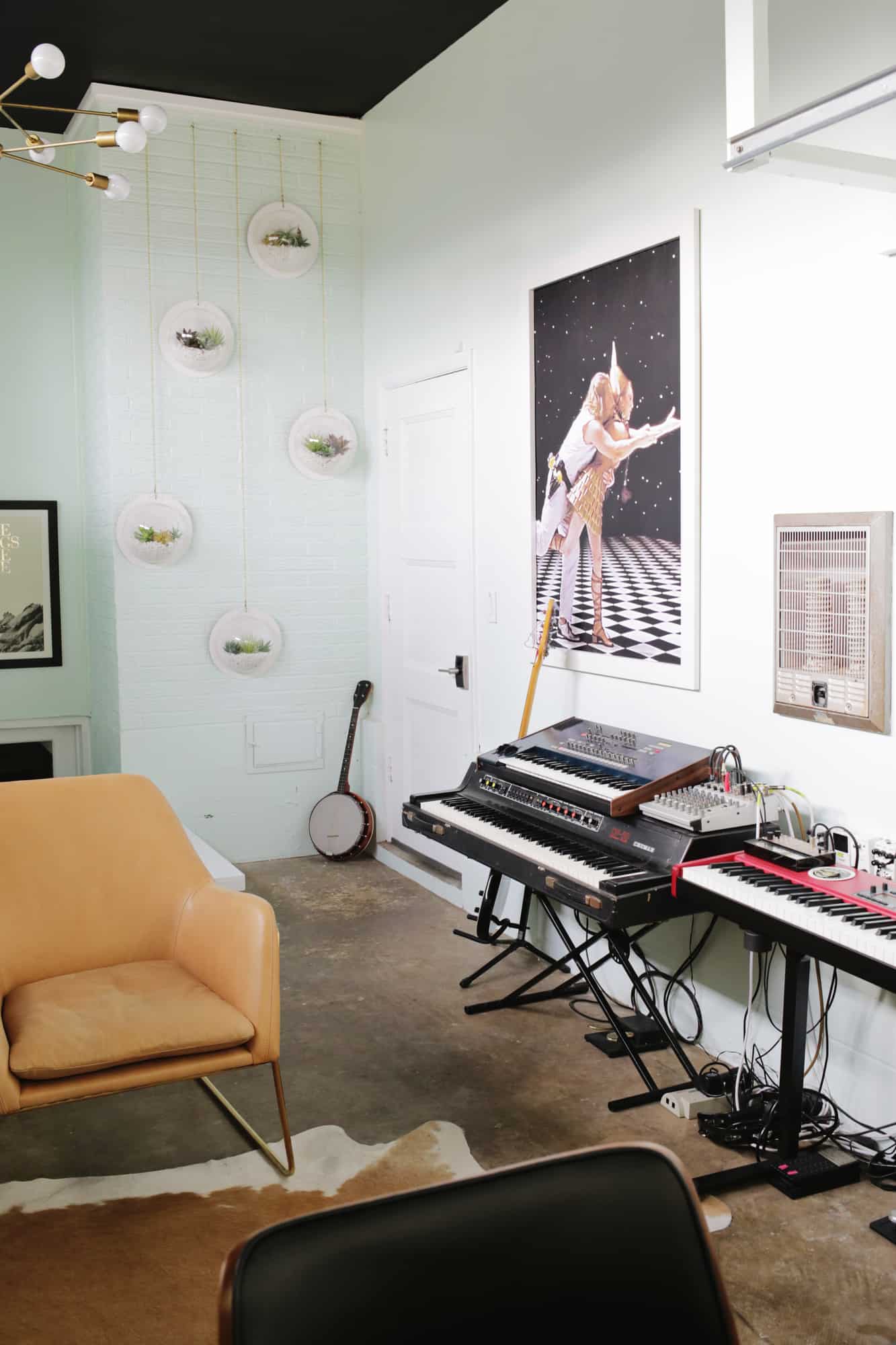 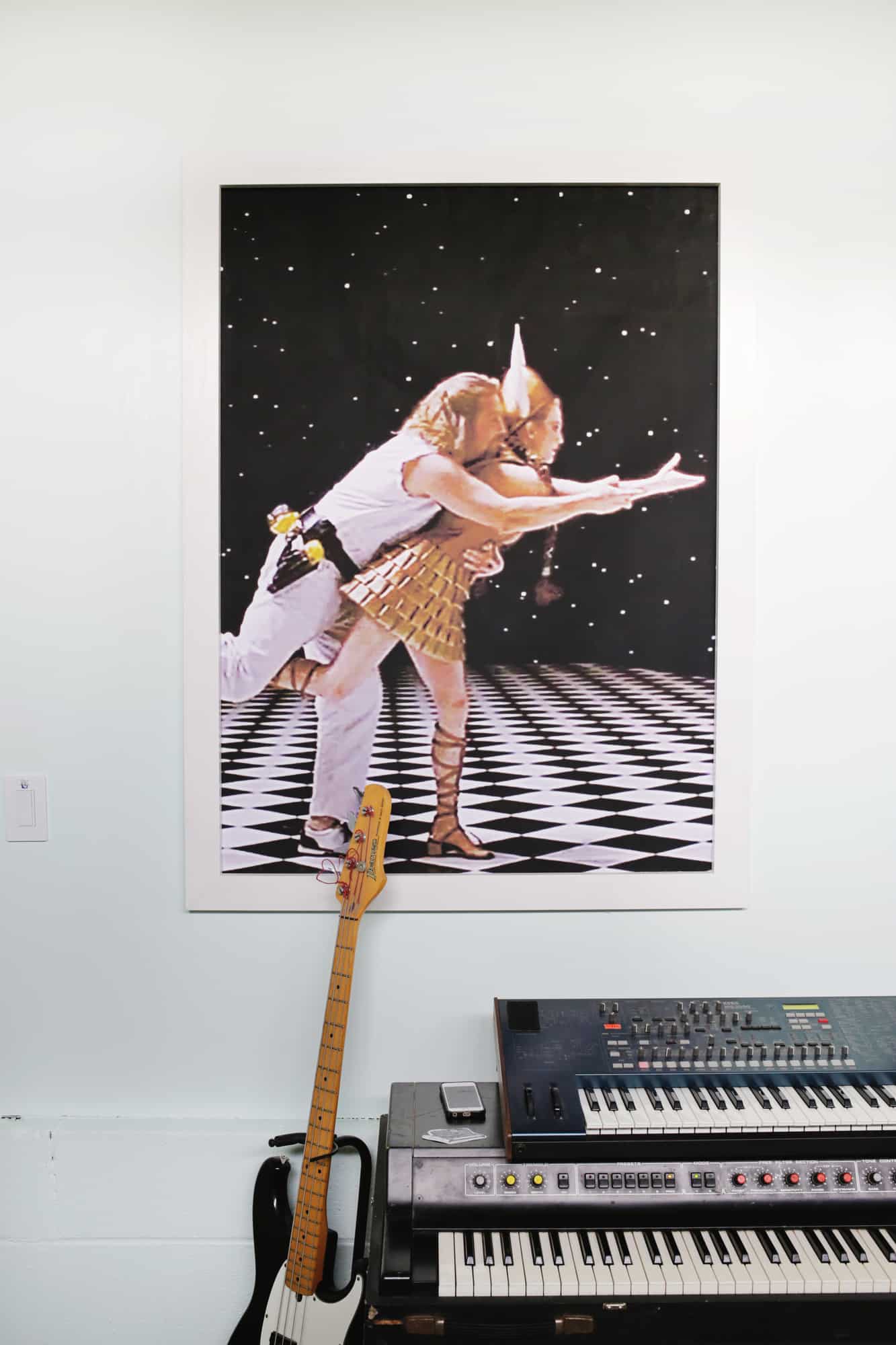 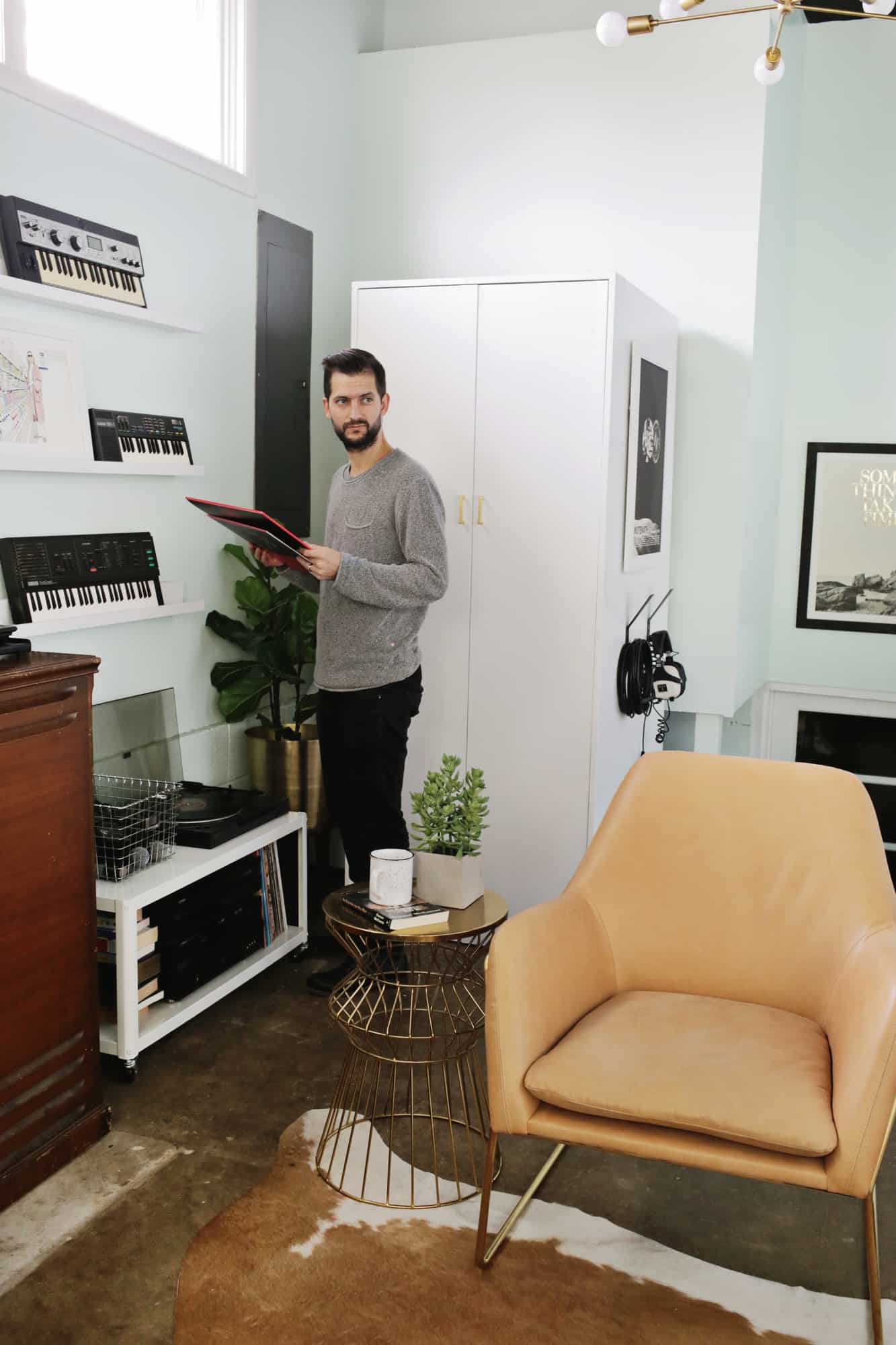 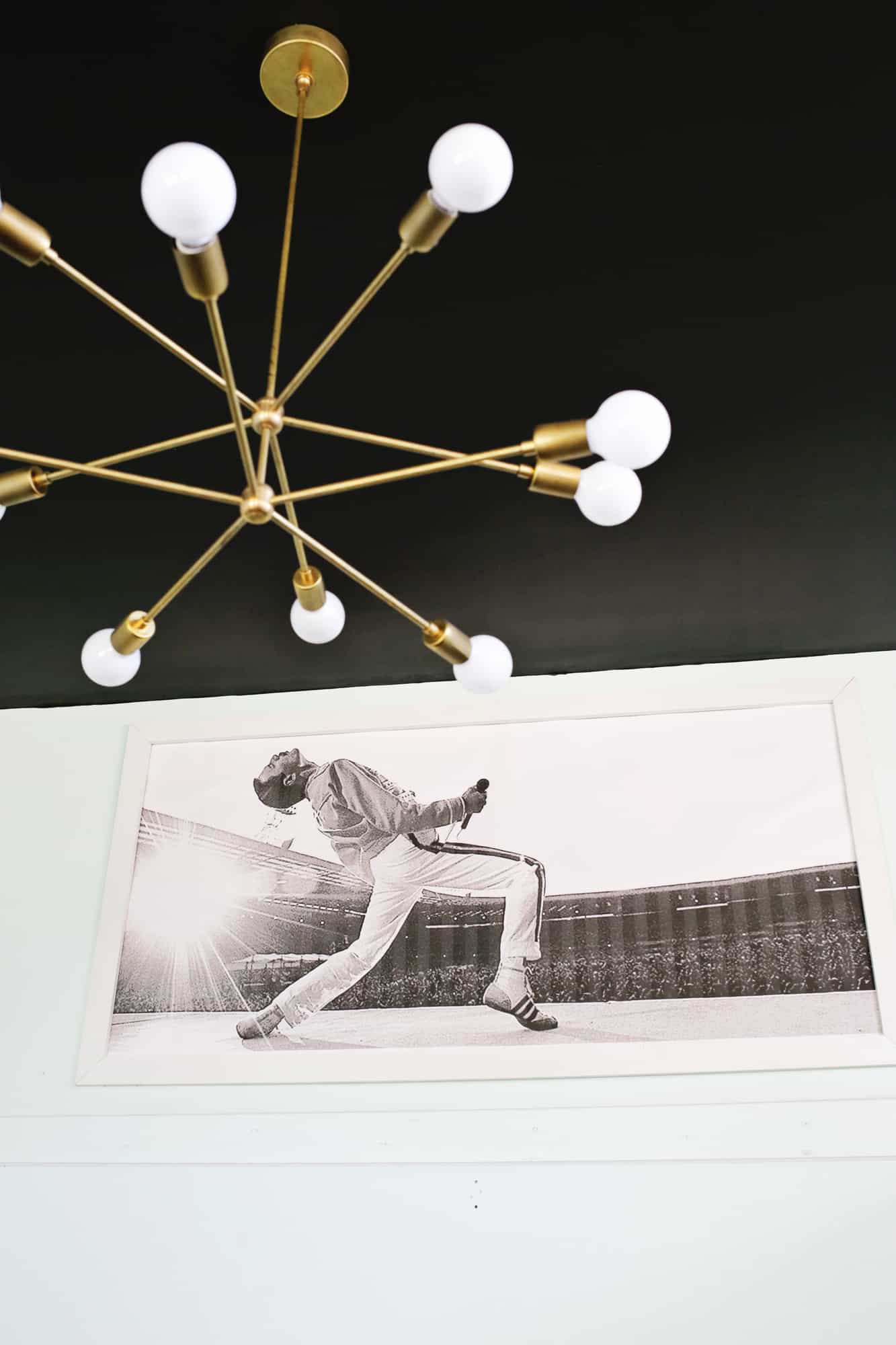 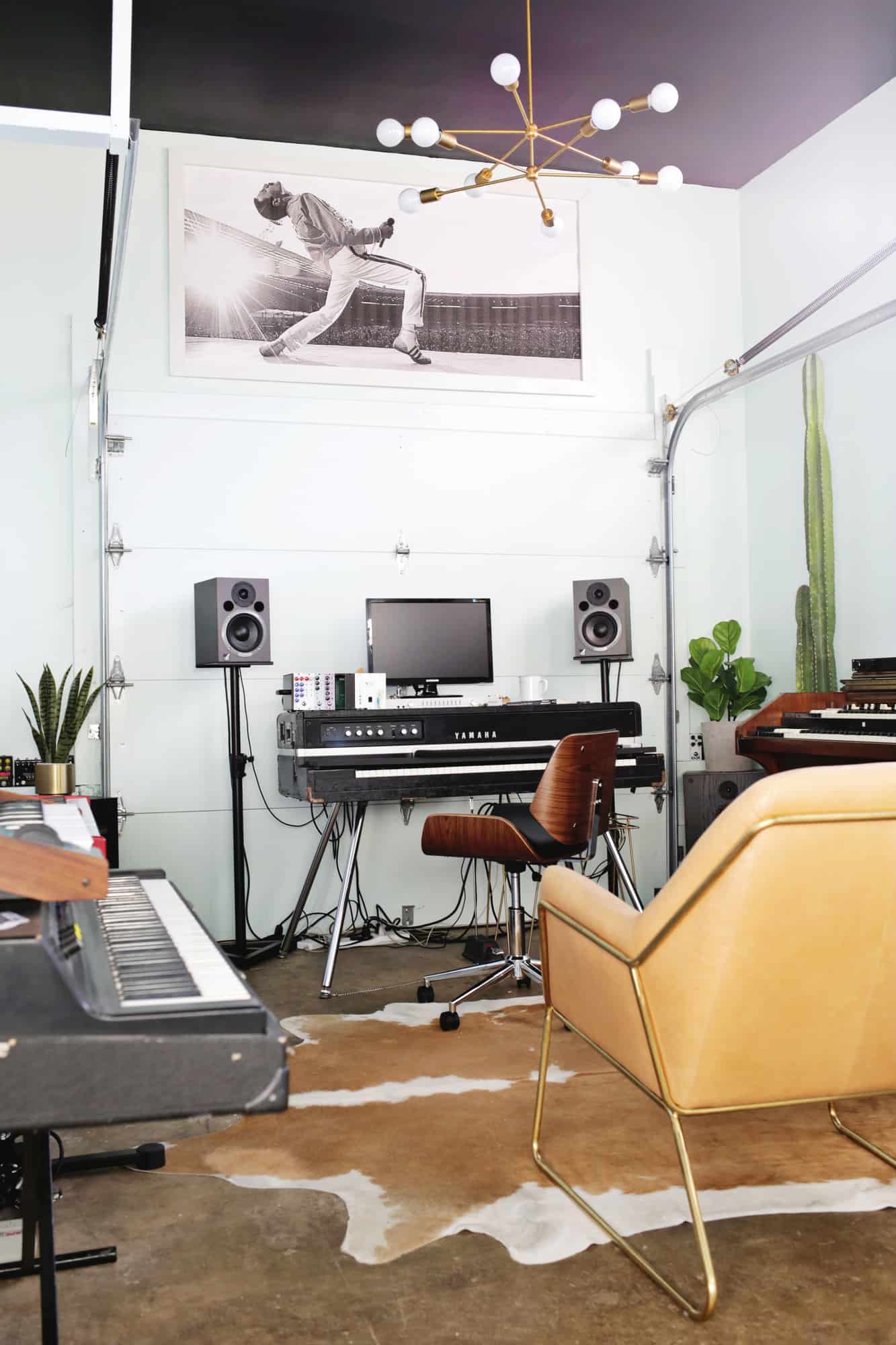 We also added in a mid-century desk chair for Todd that he can lower and raise to use as a piano stool as well for the various other key options in the room. 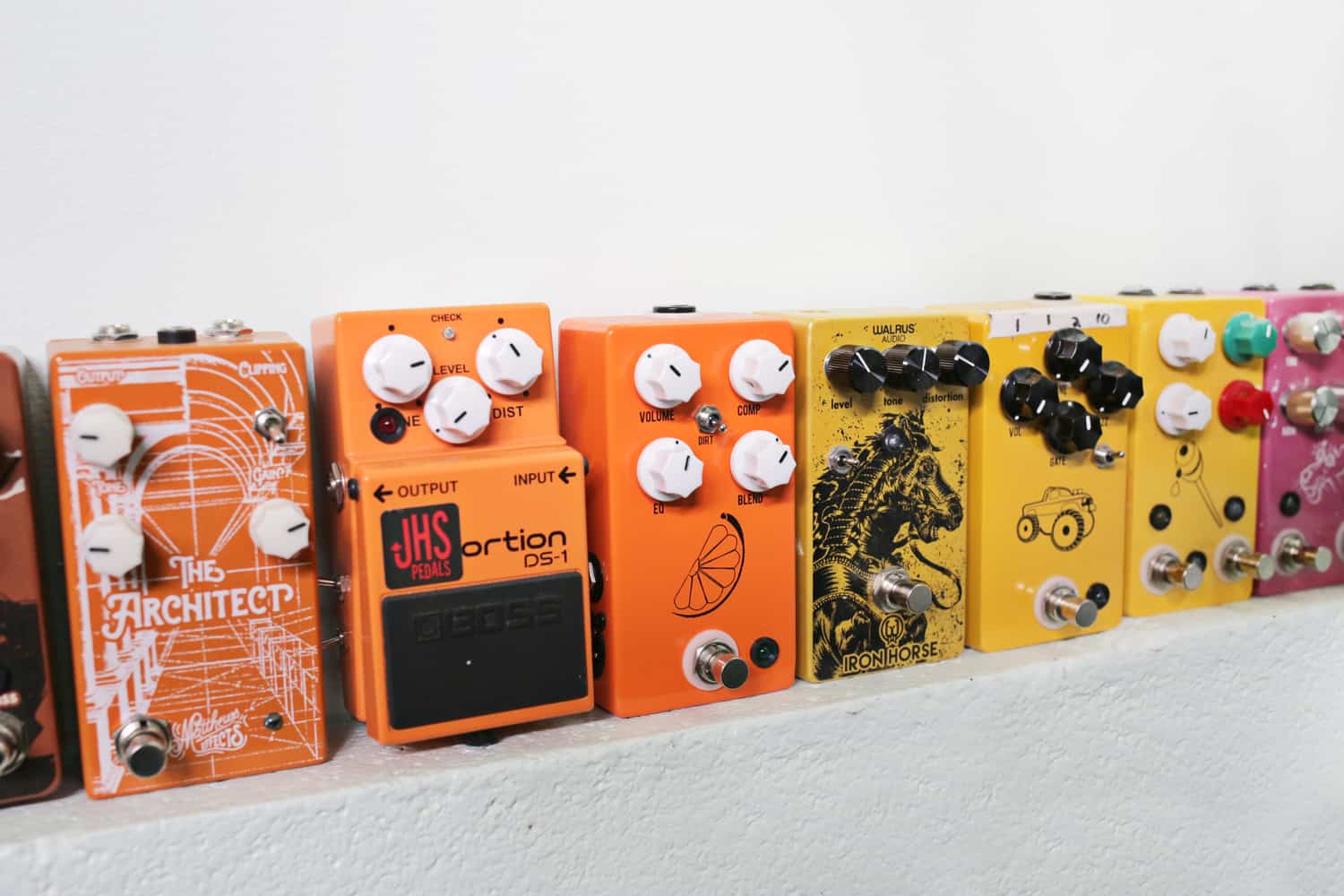 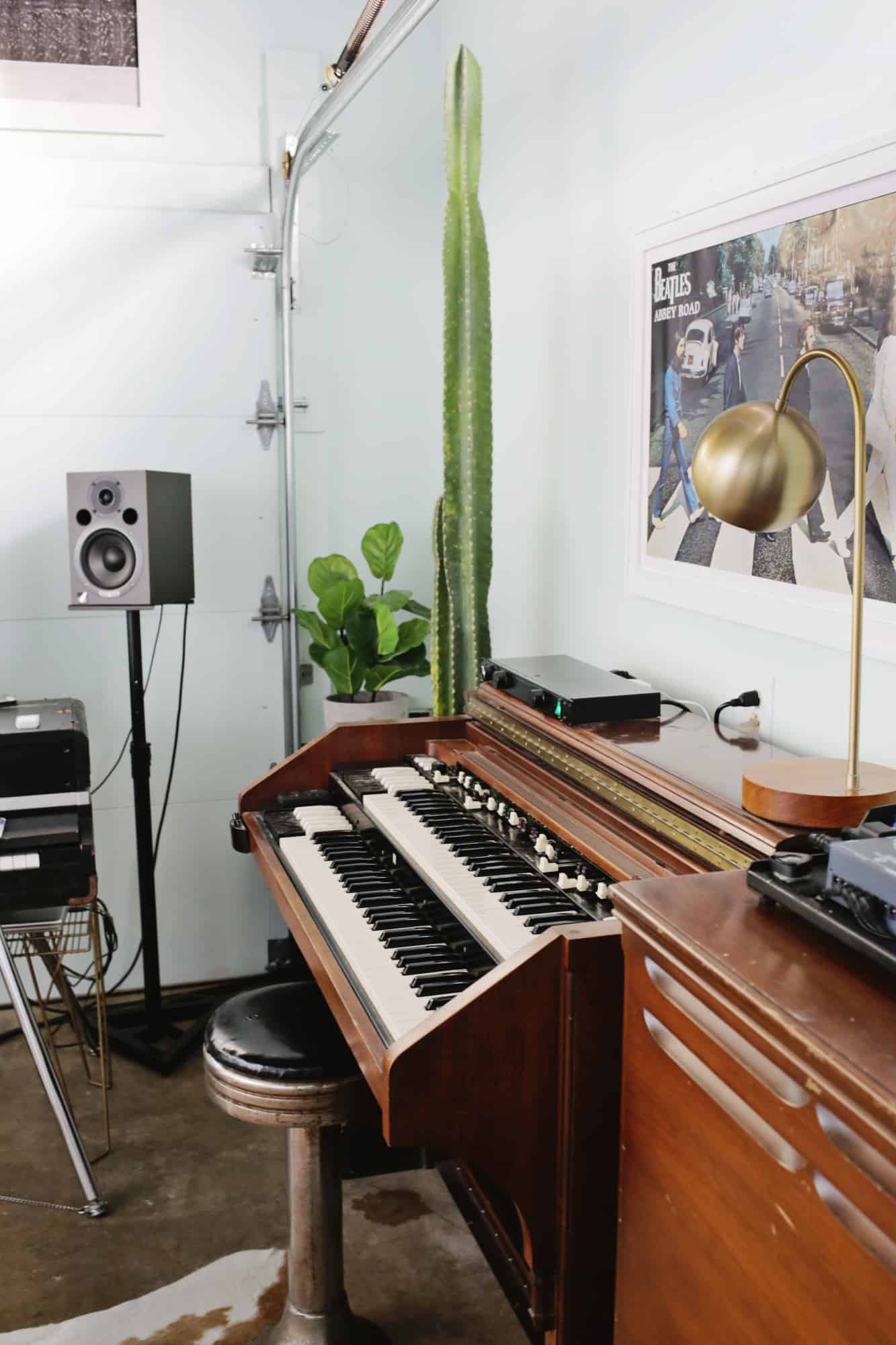 Todd has tons of gear, and while some of it is stored in the basement or in the house, there’s still a lot of room to hang guitars and have several keys and organ options at his fingertips. Since he is tight on floor space, though, he uses one of his pianos for a desk and I built a little cover that sits over the keys so he can put his computer keyboard there as needed. 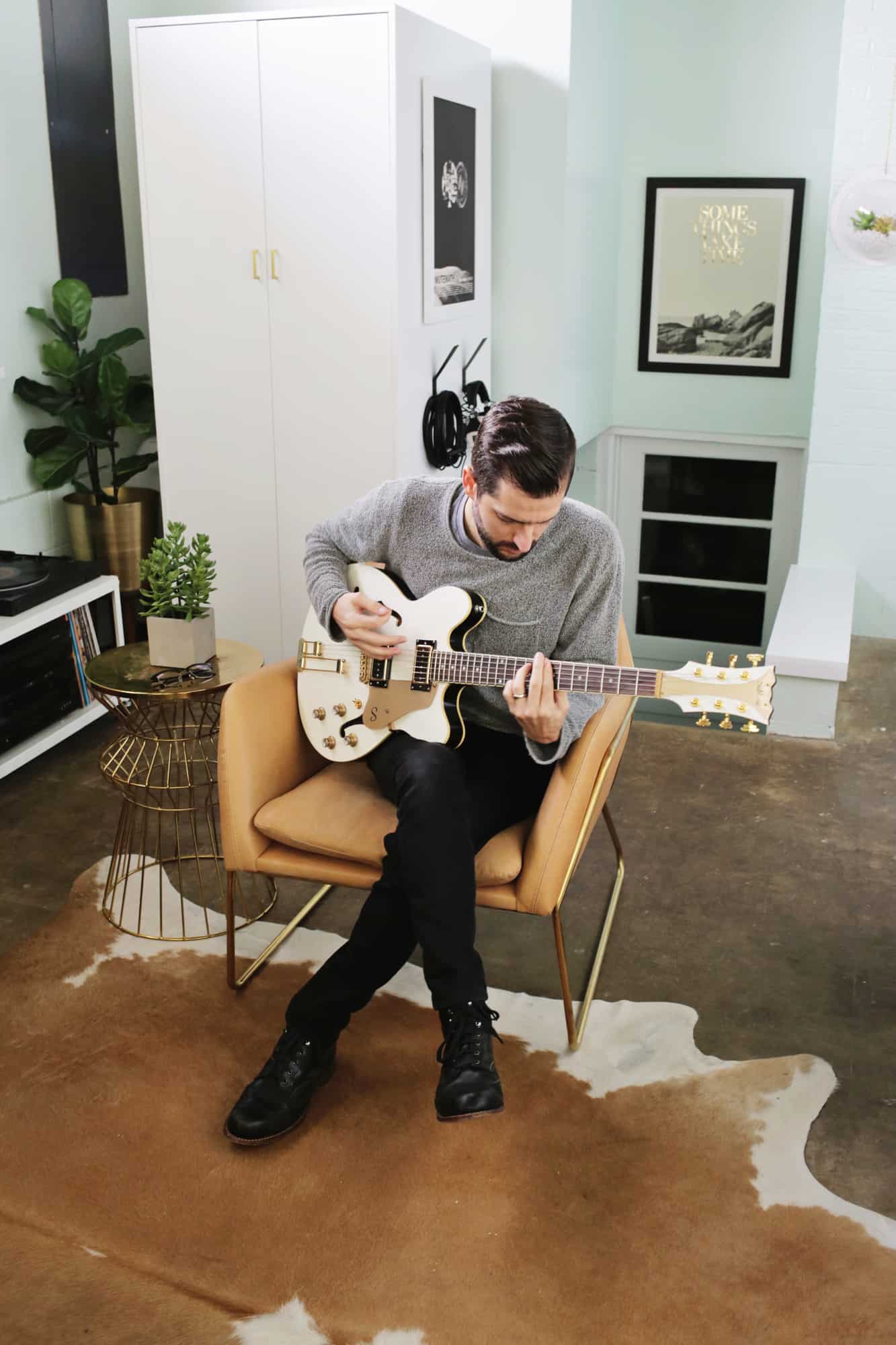 I also wanted to make sure that he had a rug that could stand up to all the dirt traffic since the studio is right off the carport, and a brown cowhide was the perfect choice for the room. That cage side table is from a few years ago, but I have these similar ones in our dining room and I love them just as much.

I think this space has come quite a long way from a storage room, so I give myself some kudos for that transformation—ha ha! I also made sure that he has several touches of his heros throughout the room (Beatles, Freddie Mercury, The Big Lebowski) to inspire him and make it feel like his own space while he is out there, too. He is always cool with whatever crazy designs I want to do inside the house so I wanted this room to feel mostly like him, and I think it does. Thanks for visiting his studio with me and you can see the rest of our house if you would like here! xo. Laura

I know I’m a little late to the party here…

I’m in a very similar situation and I was wondering if you left the garage door in place so you could resell the house with the feature of the garage?

Also, did you need to level the floor at all? If so, what did you use?

Cool space. How do you keep out water? Todd’s cords right up against the door concern me. Did you do a weatherproofing strip? Also how do you control heat/air con?

Water isn’t a problem, the garage door has a seal at the bottom and that’s never been an issue. There’s a wall heater and a freestanding A/C unit that help with the temperature!

This turned out awesome! I am wondering where you got the Freddie Poster? And do you by chance know if its the real Freddie or if its a movie scene? Sometimes I am having trouble telling them apart – which probably speaks for the movie, but I am looking for a real Freddie shot 😉 Thanks!

That green is so pretty! I’m a harpist and would love to make over a studio space! (Or maybe I’d rather have it made over for me…haha!)
Will there be a tutorial up for the keyboard desk? It’d be cool to see how you did it.

His “desk” attachment is literally a board that is the size of the keyboard with two small pieces on each end to lift the board up high enough to clear the keys and not smash them while sitting on top. Super easy to make!

Did you print that large scale image from the Big Lebowski yourself or buy it from somewhere? Love to know where or how you handled the resolution.
Thanks! Steph

Oh, the resolution is terrible! It’s just a printout from a laptop screenshot of his favorite scene in the movie—terrible quality but just a fun thing for him to look at!

Looks great! Is it cold in there or did you add heating? Cause man I know my garage is not exactly toasty.

It has a vintage wall heater built in one wall for the winter months (it works really well actually!) and he has a free standing unit next to the washer/dryer for A/C in the summer. It’s not perfect but it works well enough and sometimes he opens the garage door in pleasant months 🙂

Looks so amazing!! It’s always a struggle to make my husband’s chords and equipment look nice so I’d love to know more about the piano desk 😉

His “desk” attachment is literally a board that is the size of the keyboard with two small pieces on each end to lift the board up high enough to clear the keys and not smash them while sitting on top. Super easy to make!

Todd’s studio looks awesome!! I love how you kept its character after renovation. It’s beautiful. 🙂

Love the posters and the wall color!! What a cool space!

Why have I never thought to put my husband’s pedals on a shelf/ledge? Totally stealing that idea! Were any soundproofing materials used?

No soundproofing has been done! The garage is attached to the house on the wall where the washer is, so you can hear most of the music in that room but the bedrooms are on the opposite end of the house so it’s really not that bad without soundproofing 🙂

Wow, the space looks so good! I really love the hanging planters, it’s such a great idea!

Love this space! I wish my ceilings were higher so I could paint them a dark color as well, but I doubt it will work in my space.