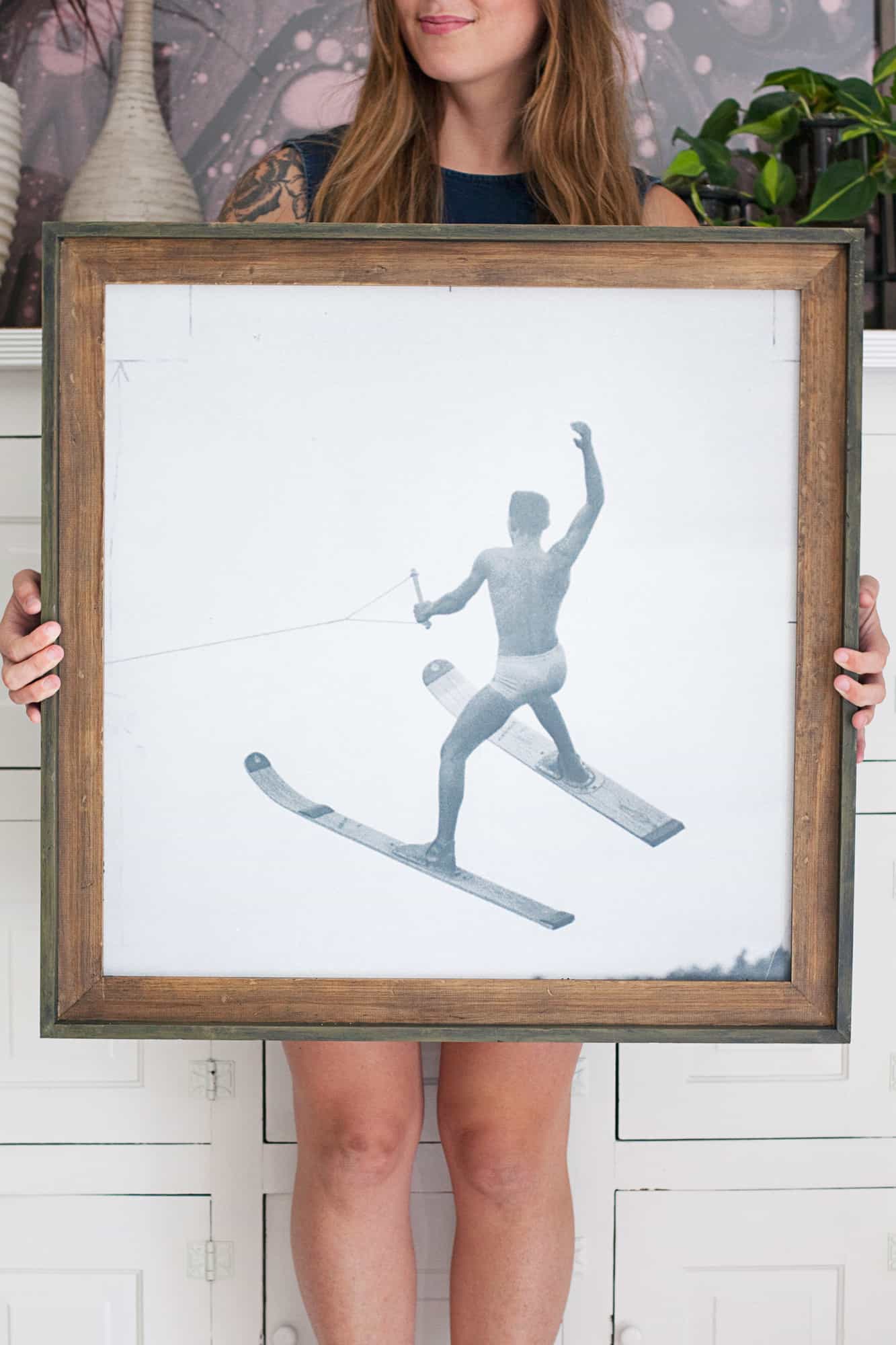 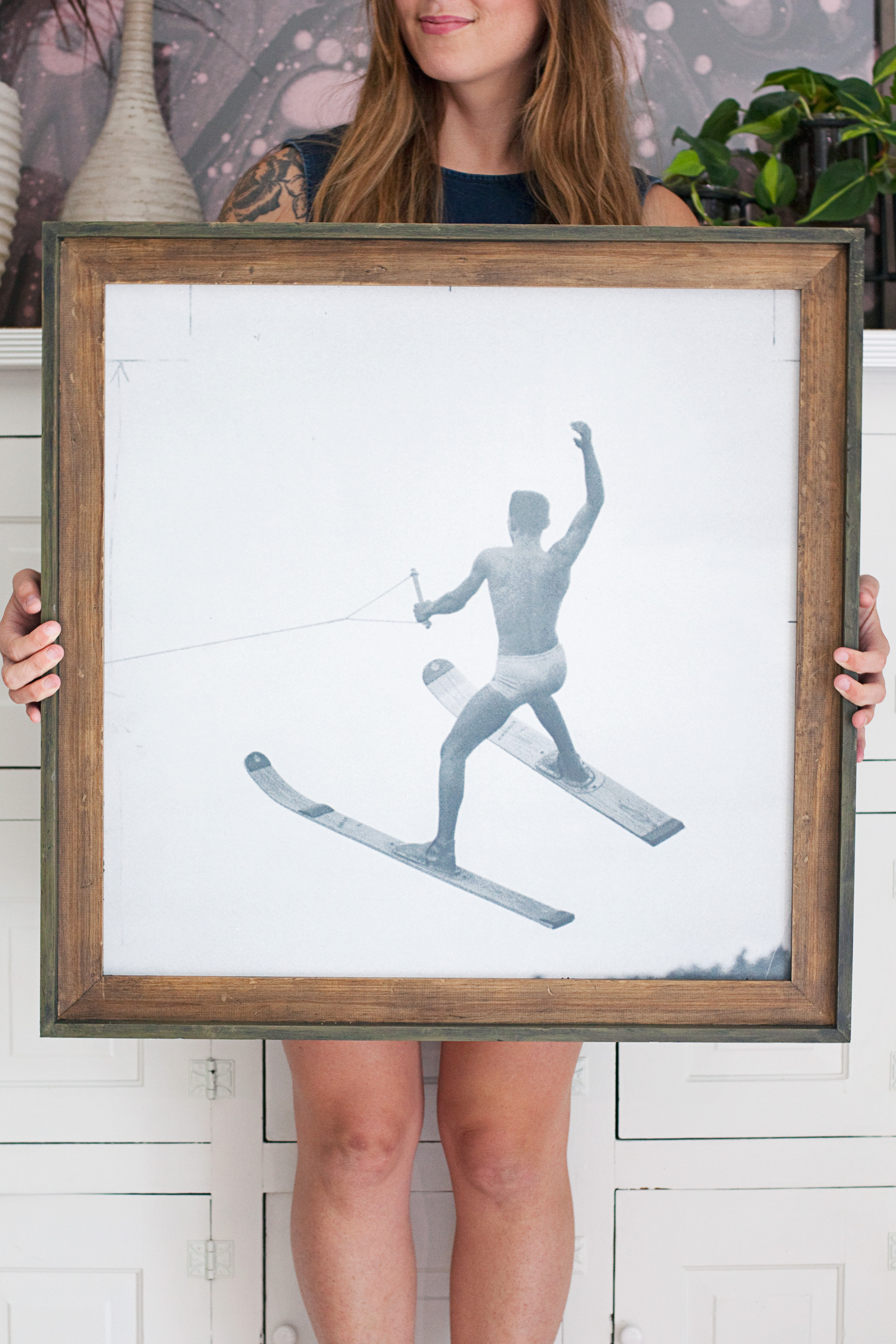 Hey, I’ll be the first one to admit it—I easily grow bored of the decor in my home. It’s my one weakness. (Ha!) Lately I’ve been rethinking a lot of the art on my walls and had an idea to restyle a frame, rather than donating it or hoarding it in the attic. Initially I was thinking I’d like to paint this wooden frame black, but then I thought it might be more interesting to give it a hint of color and some character with a rich patina. 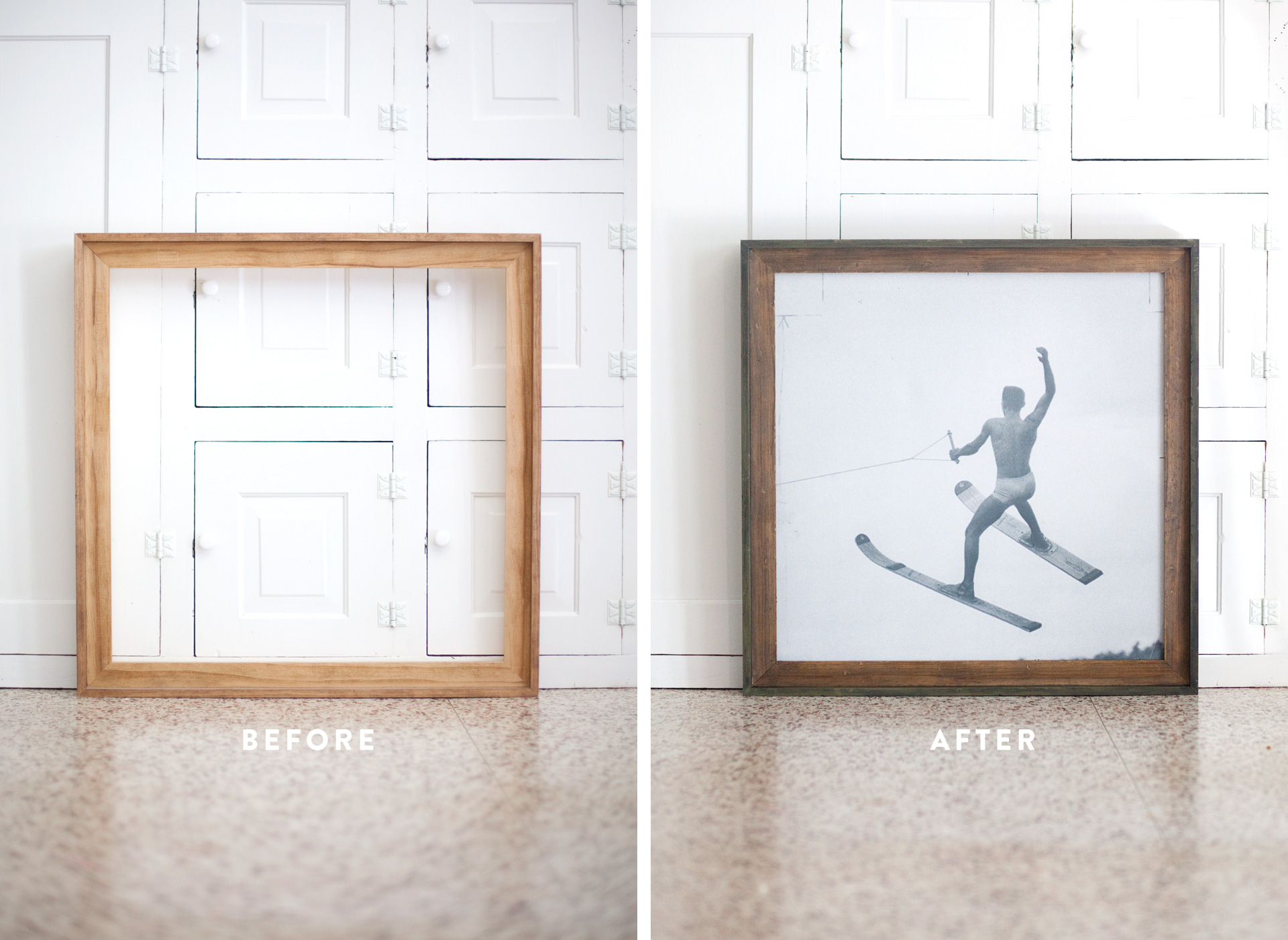 We partnered with Annie Sloan for this restyle, and I was so excited to try out a variety of their colors to see what kind of subtle color I could achieve to add interest to this plain wooden frame. You can use this link to locate a stockist closest to you! For those interested, I actually made this frame with no power tools, and you can see how I created it, along with two others, in this post. 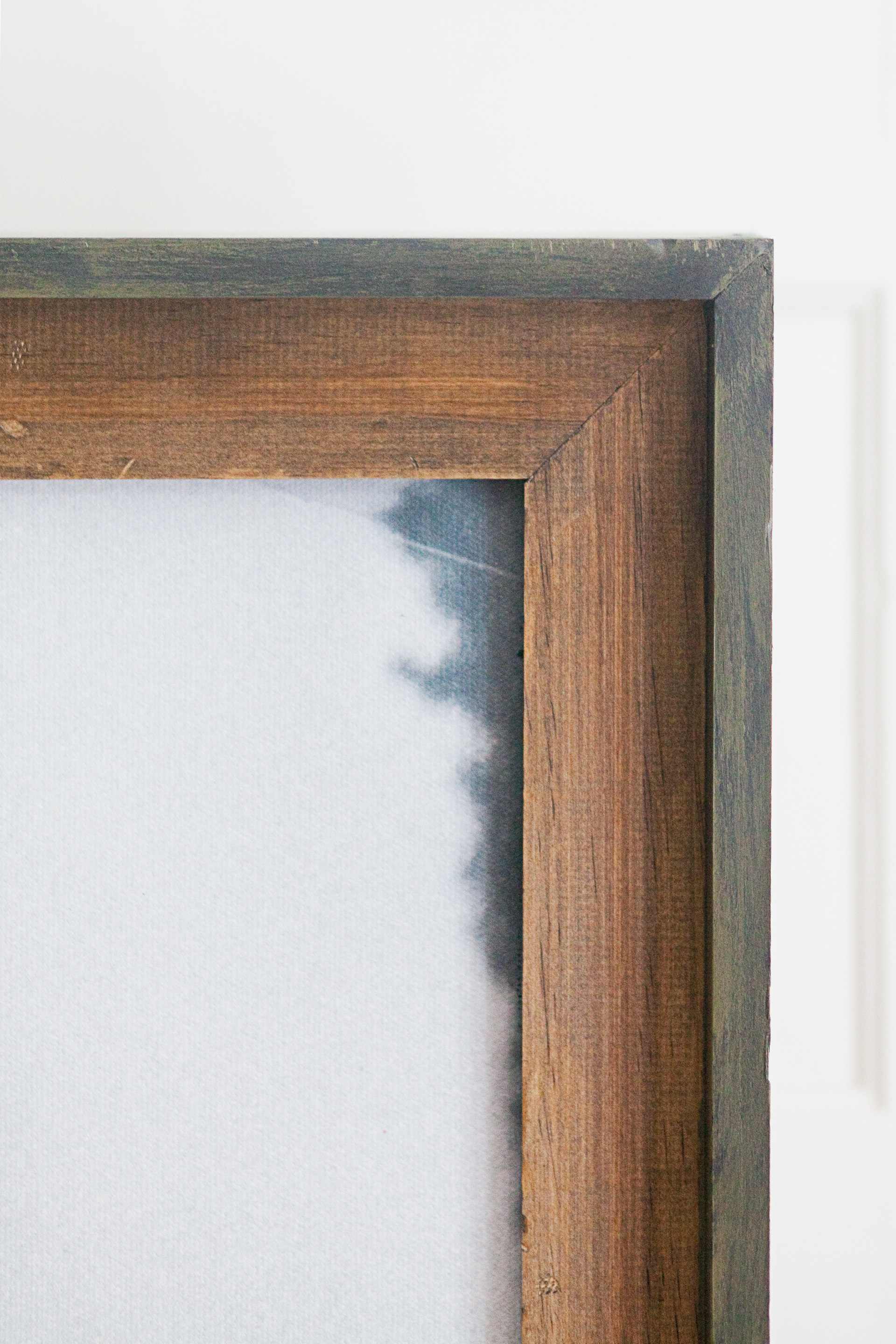 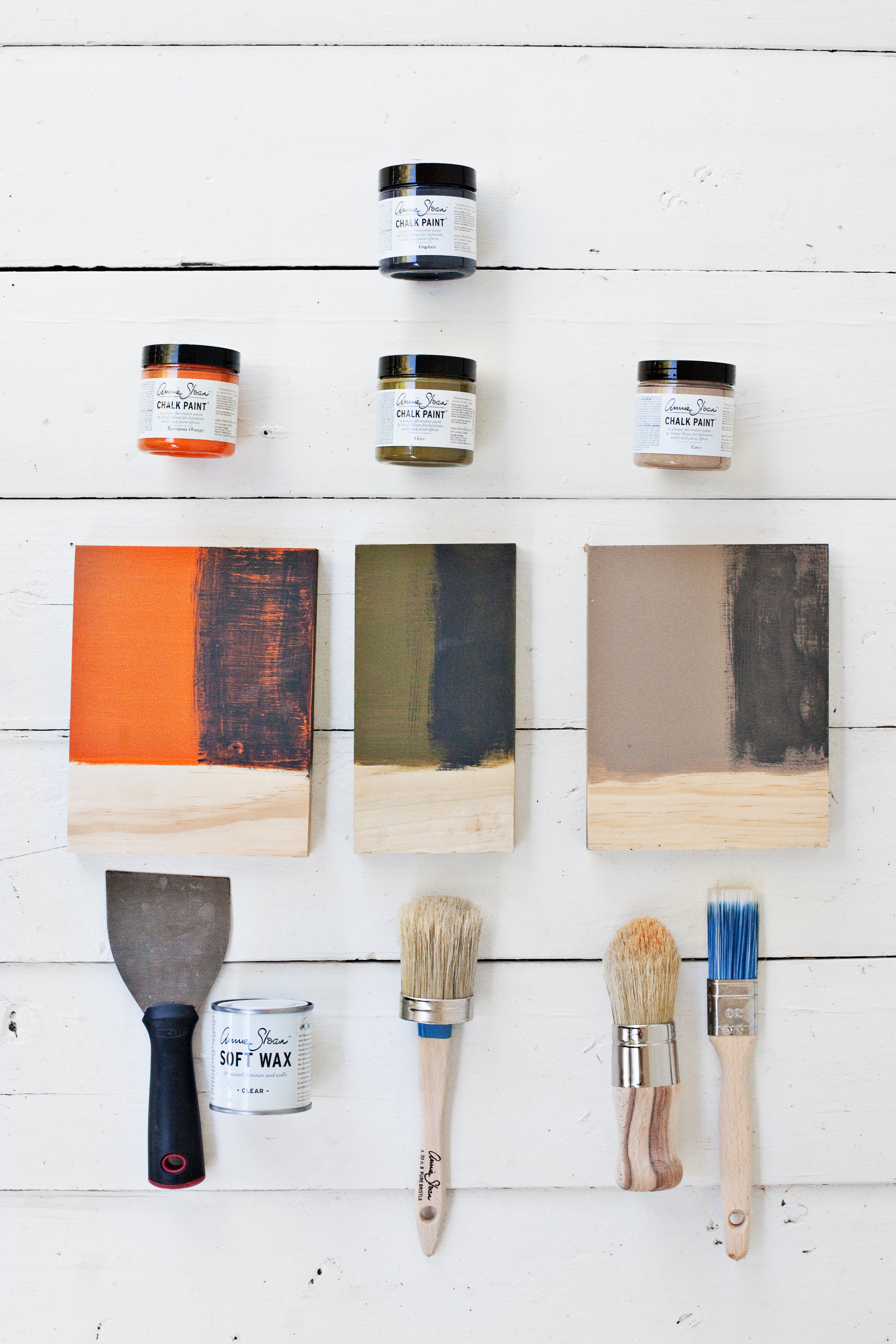 Trying Out Colors and Patina Techniques

I knew I wanted a dark, subtle finish, but I definitely wanted to see a little bit of color showing through. So to start out, I wanted to see what different colors looked like underneath the Annie Sloan Graphite I had chosen for my top color.

The first board above shows the color Barcelona Orange with a coat of Clear Chalk Paint Wax, then a coat of Graphite, which I then scraped off with a drywall spatula. I liked the look of the scraping, but the orange was too contrasty with the Graphite. I wanted something that would tone in better and feel more neutral.

The second board above shows Olive with a brushed on coat of Graphite over it. I really like the olive color, but you couldn’t see enough of it through the brushing method I used. And I wanted to try one more color.

Optional: hammer and other metal objects for distressing purposes 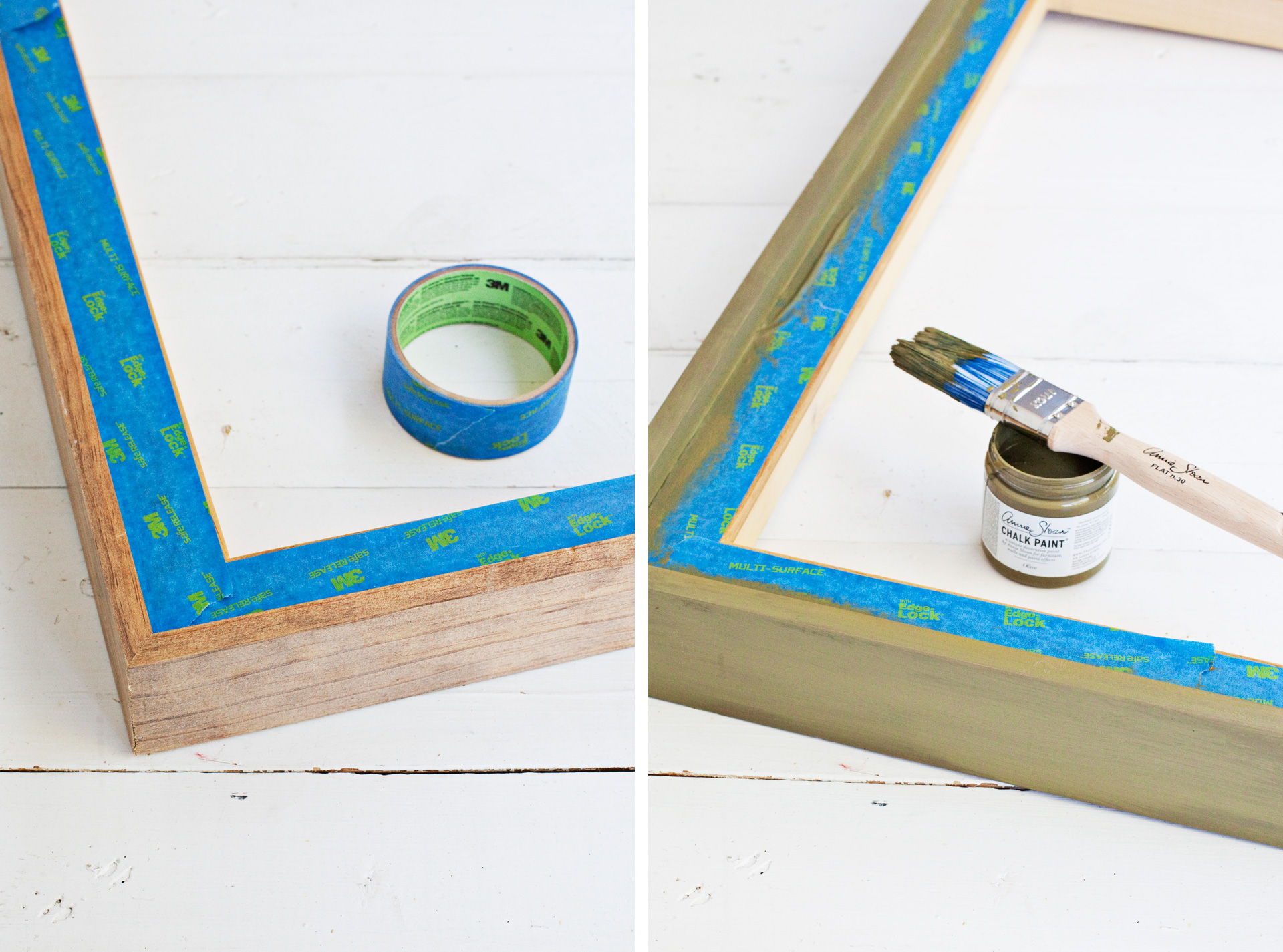 Step One: I taped off the inside portion of the frame, leaving just the outside edge exposed for painting. Then I brushed on two coats of Chalk Paint. There is no need to sand or prime your surface before using Chalk Paint, which was an idea that took some getting used to for me. But as skeptical as I was about that, it worked out and the finish was lovely! 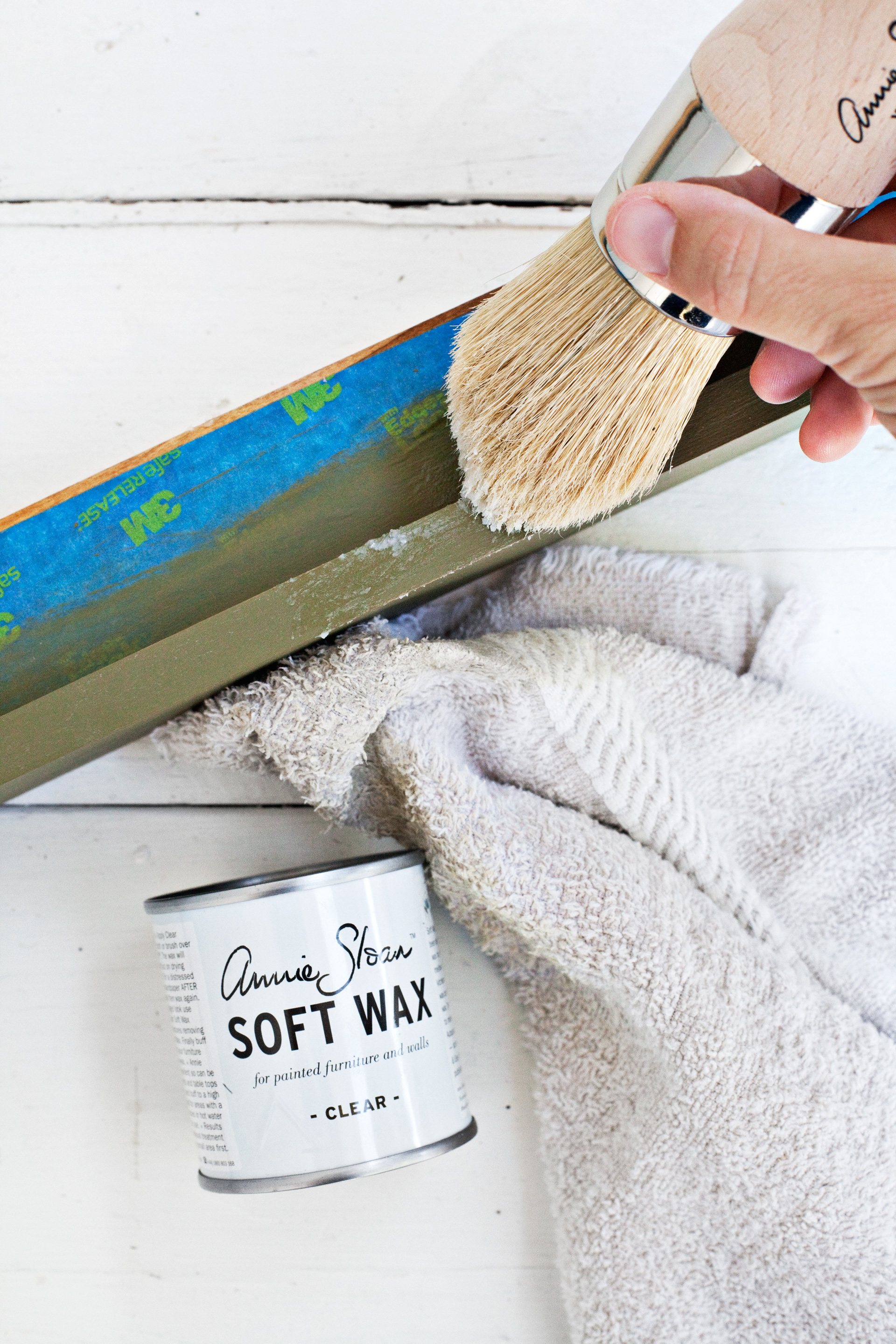 Step Two: Brush on a coat of Annie Sloan Clear Chalk Paint Wax, and rub it in with a rag. The more you rub, the shinier it will get, but there’s no need to get too crazy here. You’ll just be painting on top of it in the next step. 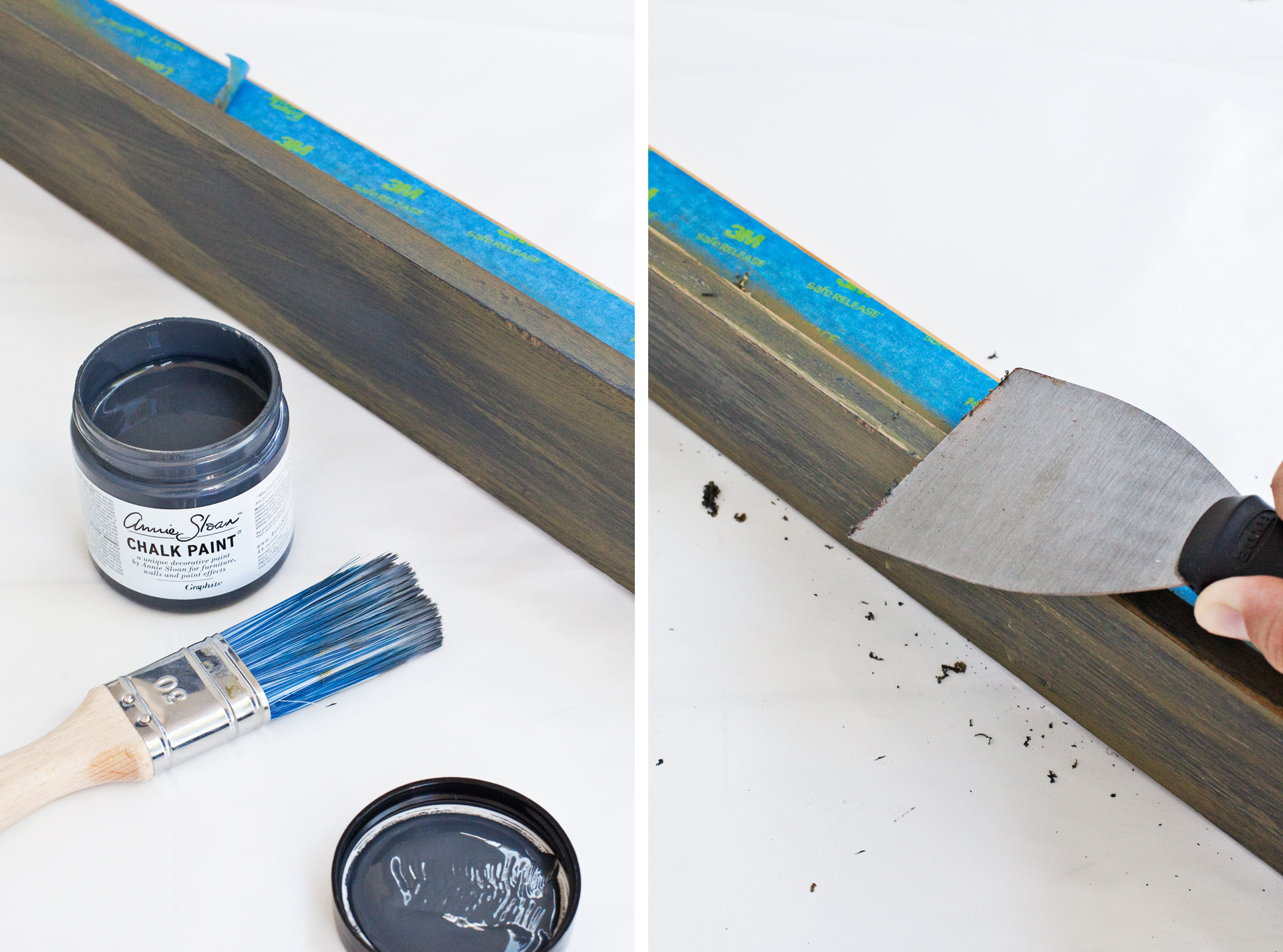 Step Three: Brush an over coat on top of the wax. Do not use a wet brush, but it shouldn’t be too dry either. Use a light hand when brushing it on, as you don’t want it to be too thick, at least for the method I was using. Then I chose to immediately scrape off much of the paint with my metal spatula. You can wait for the paint to dry if you need to, and it will still easily scrape off because of the wax underneath. 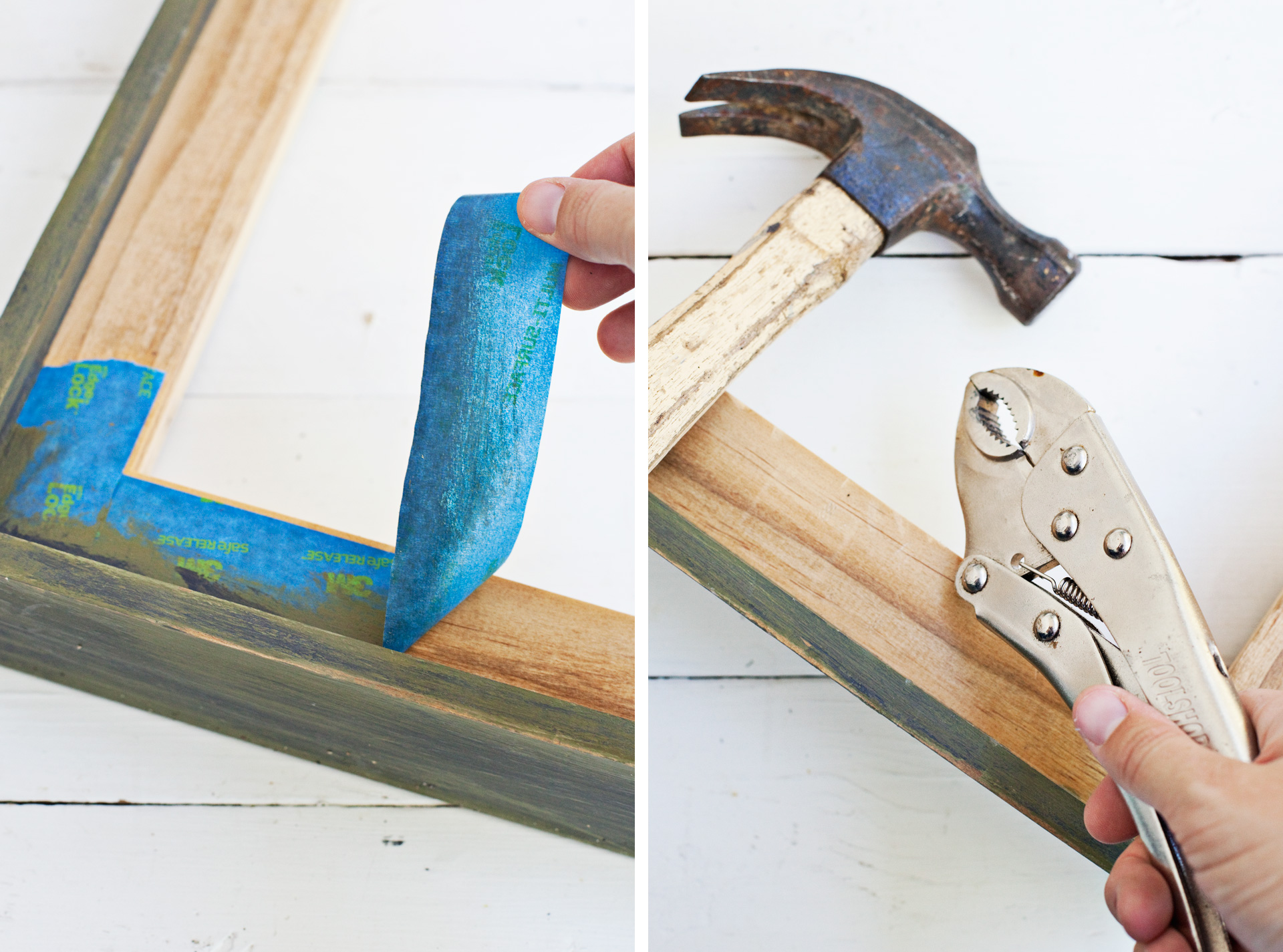 Step Four: Peel off the painter’s tape. I then chose to use various metal objects to bang around my more pristine frame to give it indents and age marks, so to speak. I even banged it around a bit on my driveway! Because the wood is pine, it marked up easily. Oak or birch would be more difficult to dent. 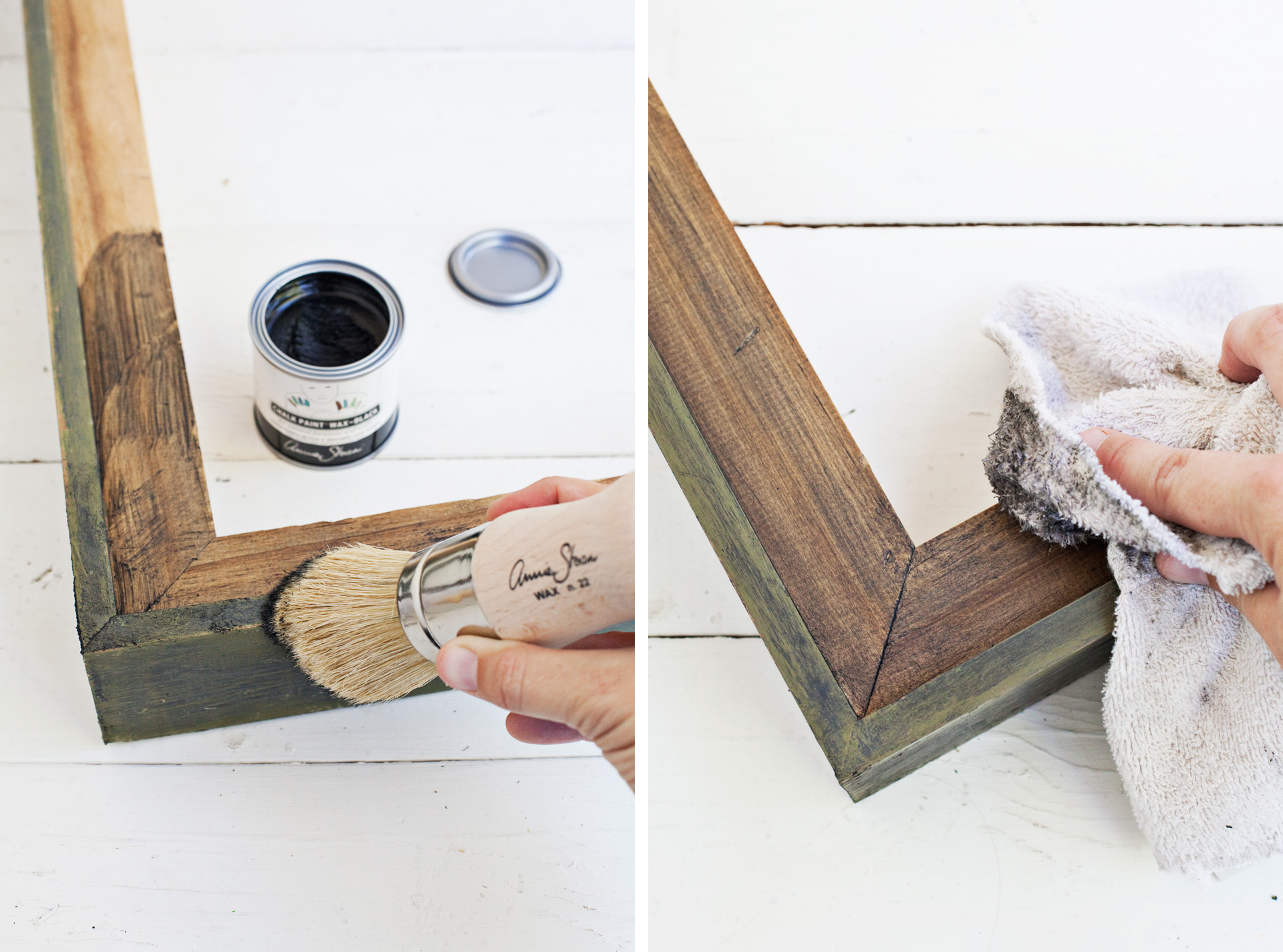 Step Five: Apply a coat of Black Chalk Paint Wax over the entire frame. Then wipe off any excess as you somewhat buff the remaining wax. The black will get into cracks, dents, and crevices, making them more apparent and also giving the overall piece a darker finish, similar to that of stain. 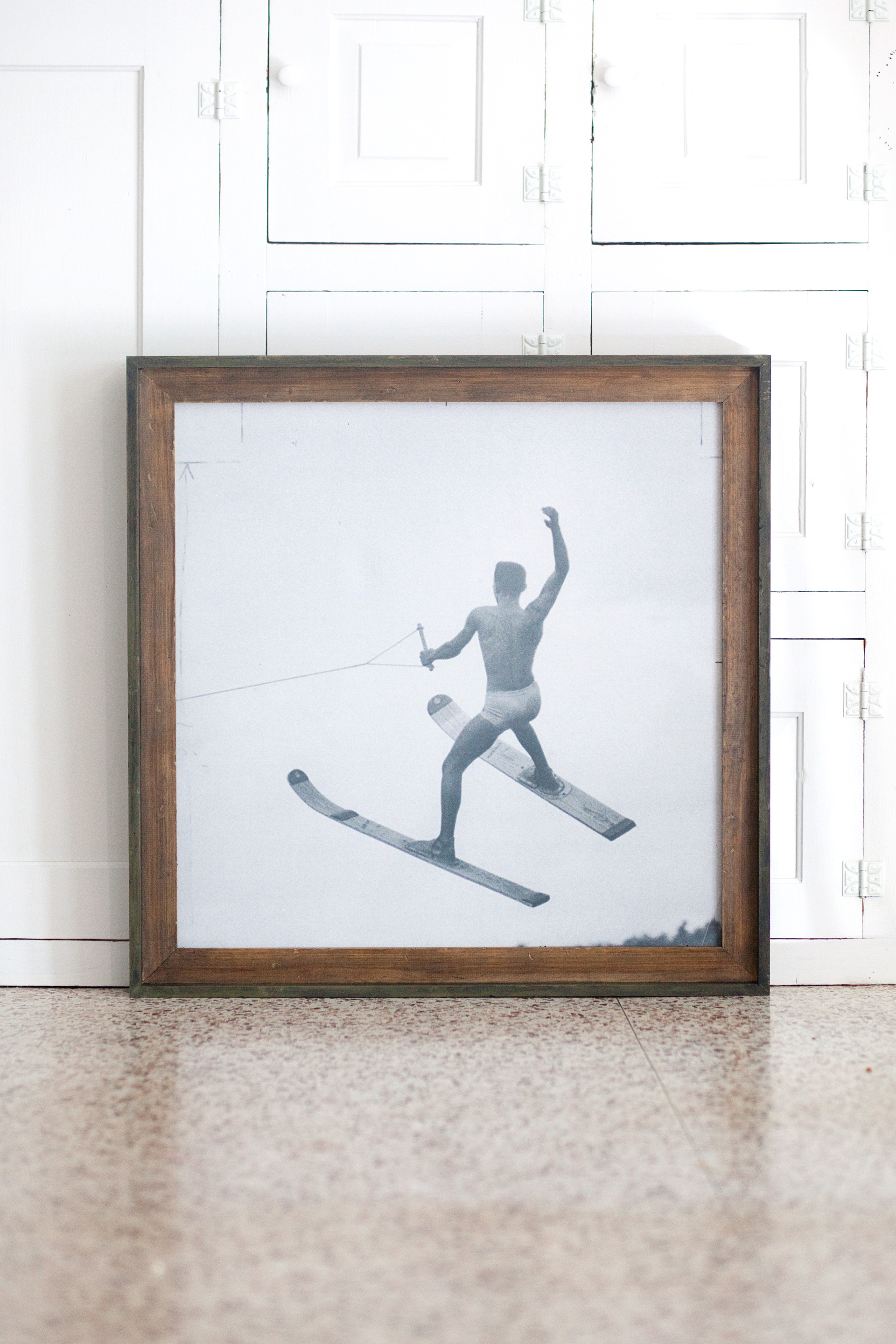 There it is! It has so much more character and richness now that it lacked before. 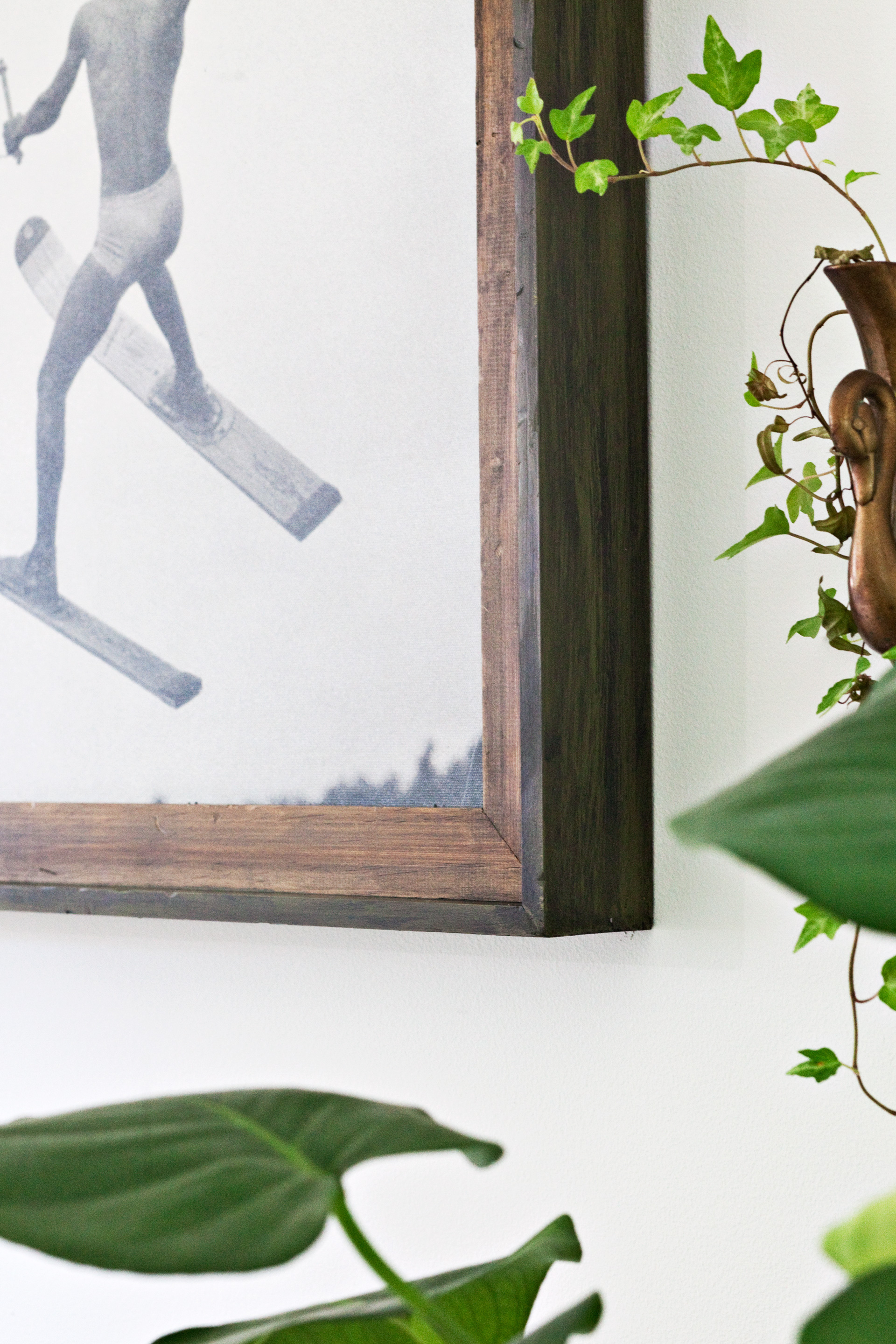 Up close you can see around the corners and across the surface where the antiquing marks have added a nice patina in combination with the Black Chalk Paint Wax. 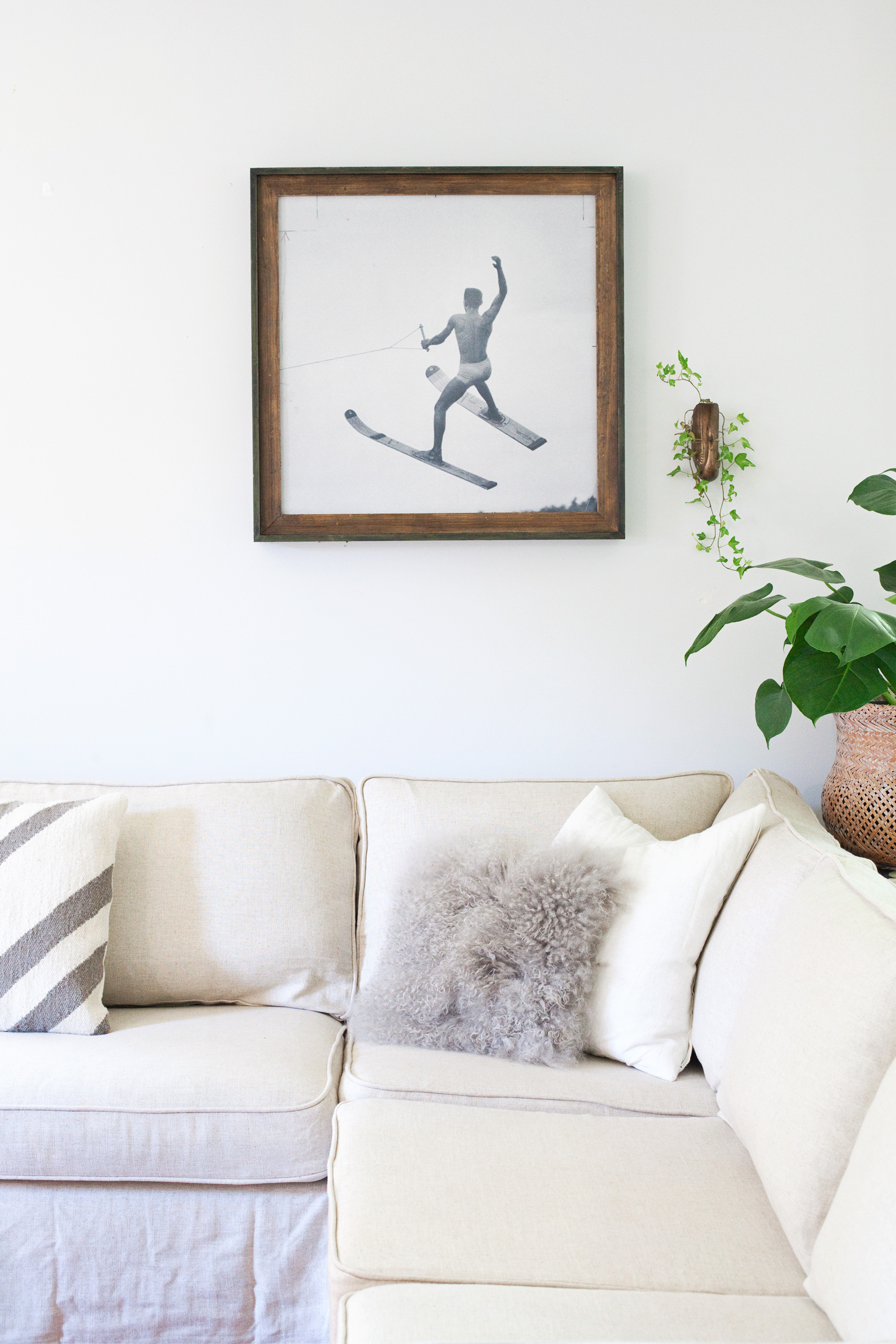 Here it is hanging above my sofa now, and I love it! I guess the frame was okay before, but it lacked a certain je ne sais quoi, and now it seems to fit in with the space much better! Now I’m already looking around my home for other items I can change up with the other paint colors I have left. That Coco grey is crying out to me! –Mandi

If you like this, you’ll love this textured picture frame DIY!