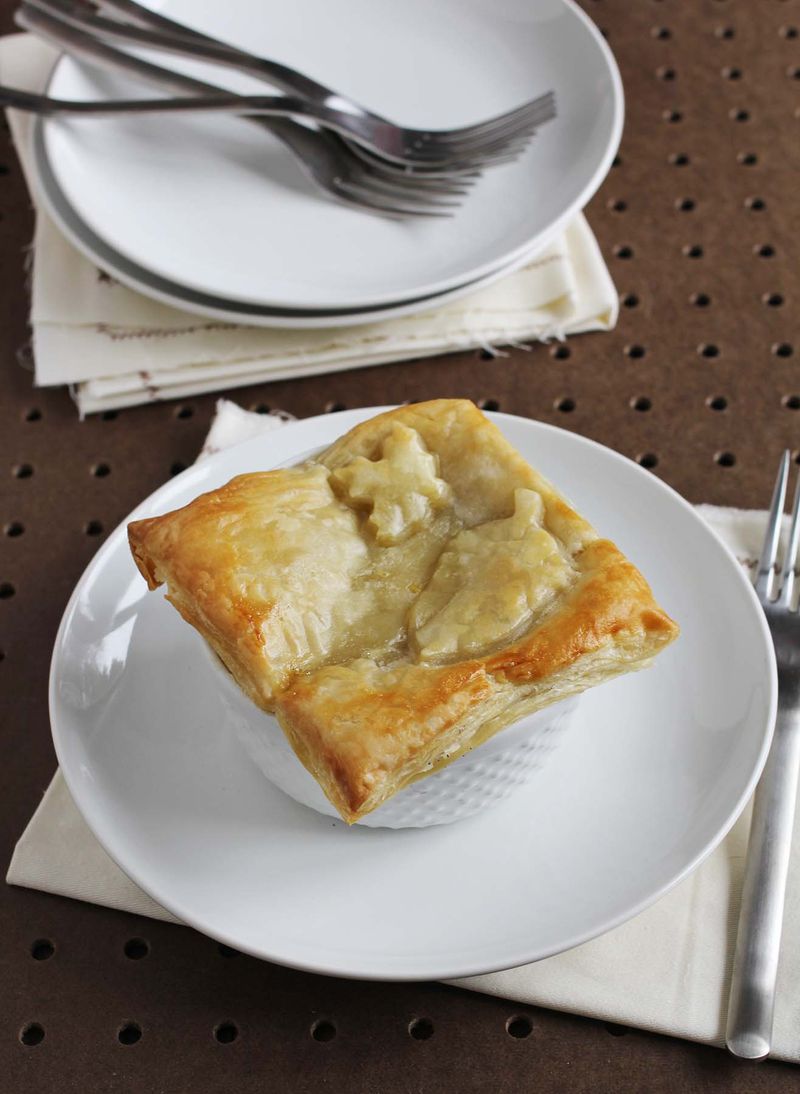 The very first time I ever baked a pot pie it was a fail. It was probably four or five years ago. I had just gotten into cooking/baking. My fatal flaw: I didn't precook the potatoes. The crust was awesome, the insides smelled great, but the potatoes were still hard. Making the whole thing nearly inedible. Whoops. 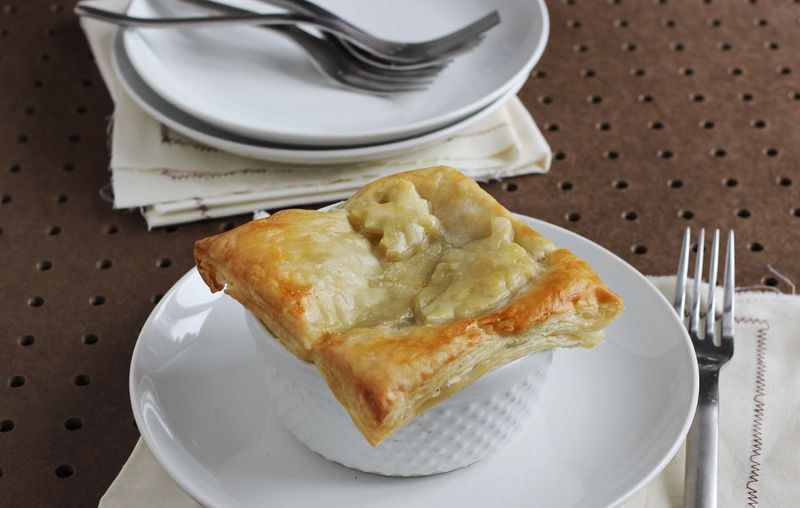 I've learned since then, cook those dang 'tater's first. They are finicky. We eat vegetarian more often than not at our house. So if you want pot pie you probably are gonna have to make it yourself. Most store-bought versions feature chicken. This veggie pot pie recipe features potatoes as the "meat" of the dish. So, I guess it could also be called a potato pot pie. 🙂 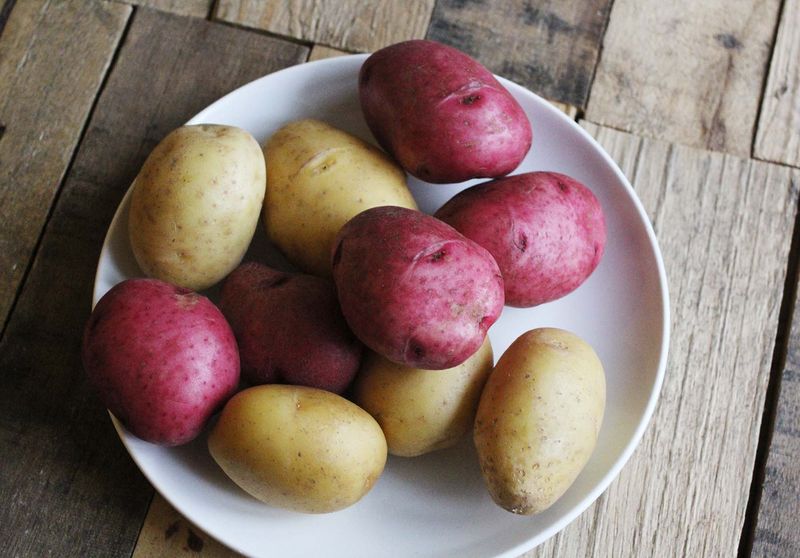 8-10 small potatoes (if you use lager, baking potatoes you'll only need 3-4)
2 stalks of celery
1/2 onion
5-6 cloves of garlic
15 oz. can of peas and carrots (you can use frozen ones if you prefer)
1/2 cup butter
3 tablespoons potato starch flour (this is great for making thick soups or gravy)
3 cups vegetable stock
1/4 teaspoon ground mustard
1 tablespoon chopped chives
salt + pepper
1 package puff pastry 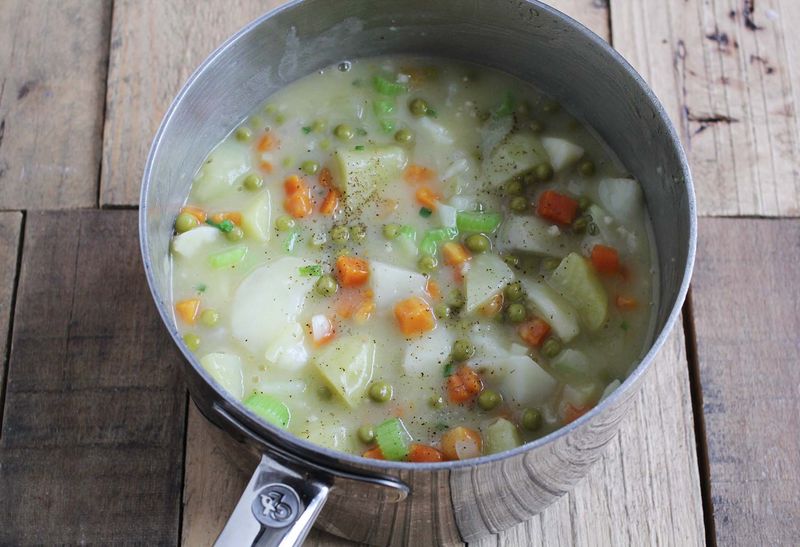 In a pot heat a tablespoon of olive oil and cook the chopped celery, onion, and garlic until it begins to soften. Remove from pot and set aside. In the same pot melt the butter. Whisk in the potato starch flour, so it's well combined, like a gravy. Season with salt + pepper. Stir in the veggie stock. Stir in the cooked potatoes, celery mixture, and drained can of peas and carrots. Season with ground mustard, salt, pepper and fresh chives. Pour into a pie pan or divide into 5-6 ramekins.

Cover with puff pastry. Brush with an egg wash (one egg whisked with a couple teaspoons of water). Bake at 375°F for 22-25 minutes until golden brown. 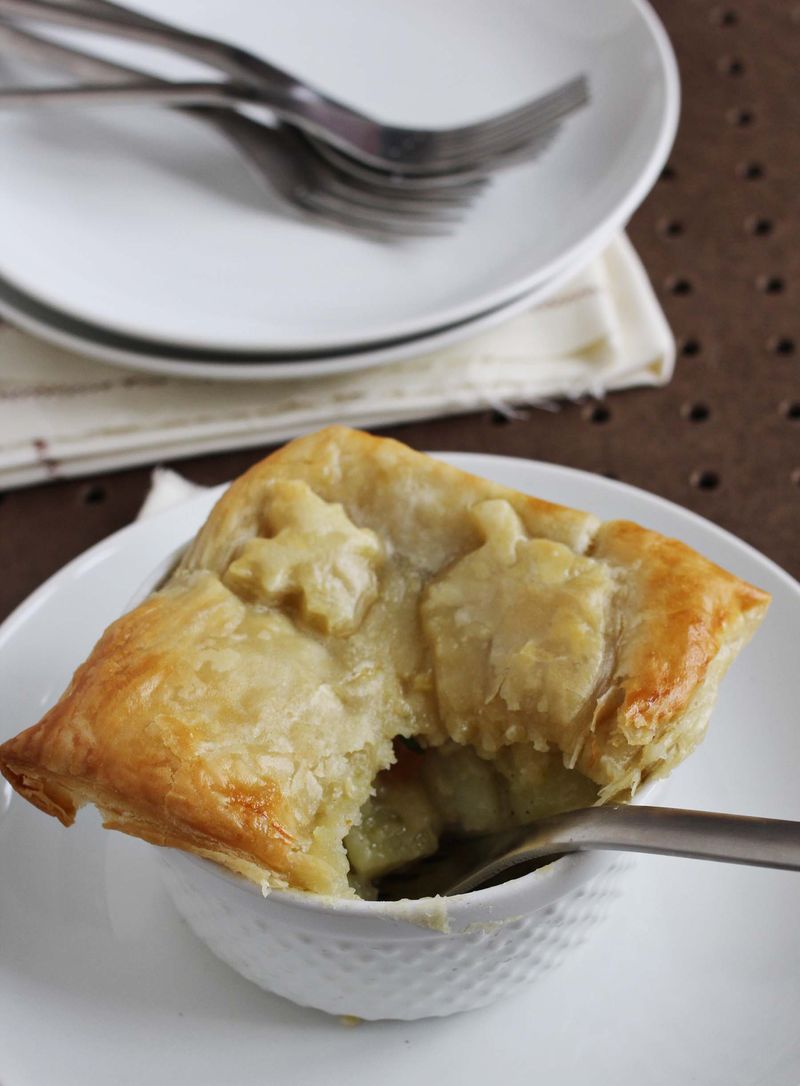 Serve piping hot. This is sweater-wearing comfort food. What? That doesn't totally make sense? Yeah, but you get what I'm saying right? Just enjoy this guys. It's winter time! xo. Emma

Oh my God!!! Definitely gonna try this it looks amazing I’ve been dying to use my ramekins for something like this!???? very happy will keep you posted on how it turns out ty so much

Good recipe. I never have much luck with puff pastry – think it’s a patience thing for me…I always rush. This turned out pretty well with little effort. I made with all vegan ingredients and substitutions worked great. Can’t wait to have leftovers for lunch. I will try with mashed potatoes and avoid my struggle with puff pastry. ????

I think I’ll skip the pie part and just make the insides. 🙂

I made this last night. Super easy and so tasty- there were no leftovers. Thanks for sharing!

I loooove pot pies, I will make this at home for sure 😀

Making this right now! Smells great so far. My husband is a vegetarian so I never thought of making pot pies, which I loved as a kid.

This looks fantastic, my kids love pot pie so I’ll definitely be making this.

Mm looks lovely, will give it a try 🙂

Can i use regular flour or corn starch instead of the potato starch flour? Or do you think it would significantly effect the outcome?

I have to try this….yum!

Great, This is really amazing page, here, I really enjoyed reading your thoughts, I will definitely share this article to my friends out there.

how’d you know this is one of my favourite comfort meals!? thanks, emma!
xx

It is nearly lunchtime here, it’s cold and I’m so hungry! I’m now drooling at my desk!

I’m so gonna try this at home!

This sounds amazing! My husband loves pot pies, so I will have to try this! Thank you for the recipe!

Oh you! I used to love chicken pot pie, but when I went vegetarian I no longer ate it. Thank you for sharing this recipe! I am really excited to try it out!

My sister and I are recent converts to pescetarianism and we’ve been bookmarking yummy foods that fit into our lives and this looks amazing. I am a fan of pot pie so this is perfect.