What Are Adaptogenic Herbs? 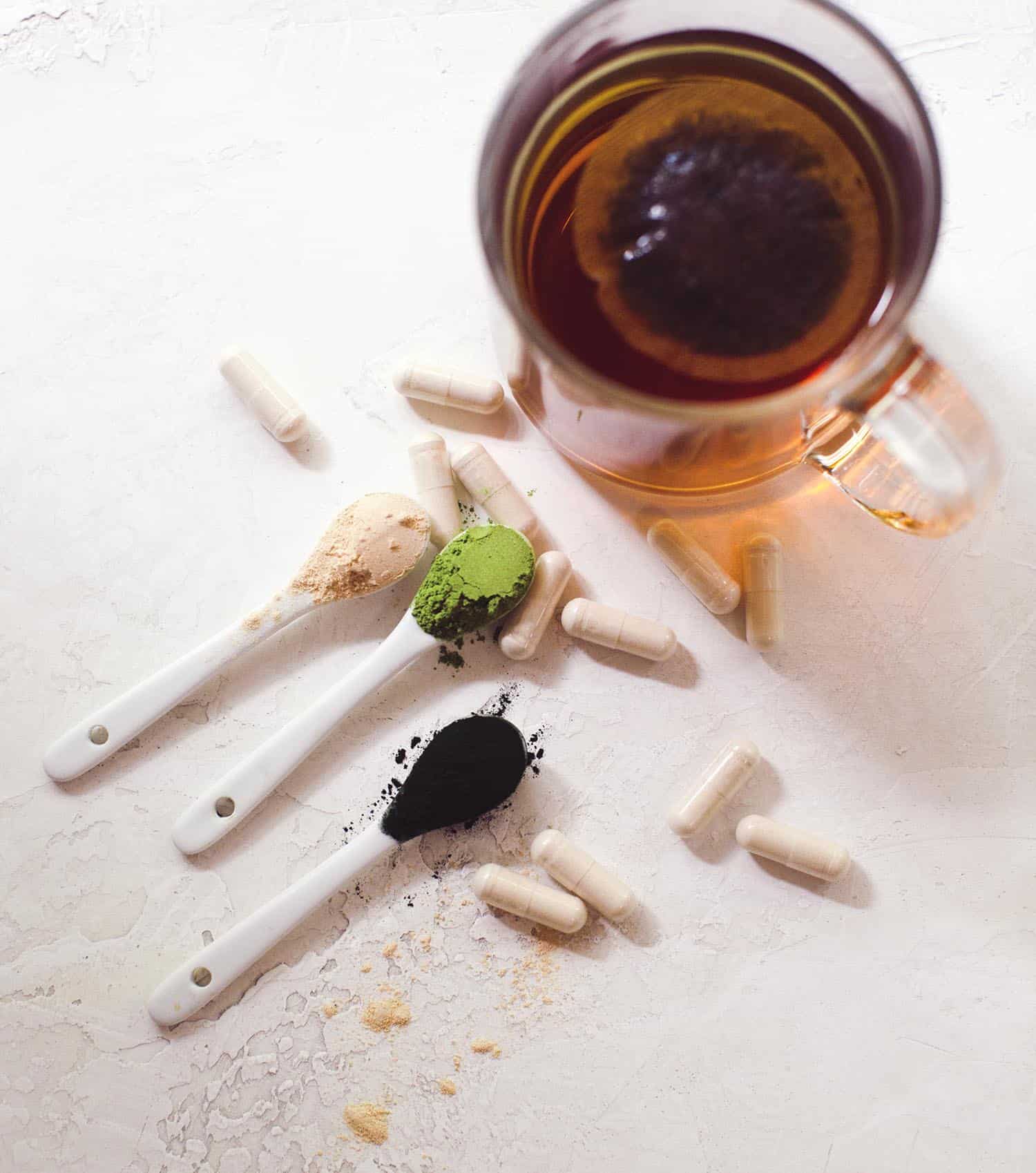 The alarm goes off … you reach for your phone. Hello and good morning to a flooded inbox, pressing deadlines and calendar conflicts. It’s 2018: We have the world at our fingertips but most days we’re tired, overstimulated and under pressure. According to the American Institute of Stress, 3 out of 4 doctor visits are all thanks to stress-related illnesses. Additionally, 40% of stressed people admit to overeating or eating unhealthy foods when experiencing pressure—staggering statistics with cascading consequences that sure get my attention.

Conventional medicine will recommend treatments like exercise, a healthy diet, plenty of sleep, lots of water and a positive, encouraging support system which are all 100% necessary to stress reduction. Concurrently, holistic approaches recommend a special family of medicinal herbs called adaptogens might help in stress reduction. (Adapt-a-what??) Ever heard of ginseng? Congrats, you already know what an adaptogen is! Adaptogens are a class of herbs that are said to help the body adapt to mental or physical stress (1). Adaptogens have been found to normalize chronically increased levels of cortisol and corticosterol—therein helping treat a variety of conditions like anxiety, depression, insomnia and gut health.

While the term adaptogen may be new to you, the truth is these fancy plants have been prized in various cultures around the world for thousands of years. Eastern Chinese medicine and Ayurveda (a medical system utilized in India for over 3,000 years) frequently utilize adaptogenic herbs. The concept of adaptogens came from Hungarian-Canadian cardiologist Hans Seyle, who broke down humans’ stress response into three phases: alarm, resistance and exhaustion. Adaptogens are thought to decrease our response to outside stressors, helping us better adapt and remain in the calm, resistance phase so that we avoid entering the draining exhaustion phase. (2)

The natural (or complementary) approach to health attempts to support natural healing mechanisms within the body by addressing any current symptoms along with social, emotional, cultural and spiritual aspects to a person’s well being. Conventional medicine identifies a specific disease by symptoms and treats with drugs, procedures or other functional means. I think all avenues deserve exploration when it comes to health, but brownie points if legit scientific evidence can back up claims. While adaptogens have been recognized by herbalists as non-toxic and safe for centuries, can they be seen as legit in the world of conventional medicine?

Not to sound like a broken record but as a quick reminder: dietary supplements are not USDA or FDA regulated so it is up to you, the consumer, to read the ingredients carefully. Look for the USP seal on any bottle of supplements which indicates that the supplement was verified by the United States Pharmacopeia. And, of course, I recommend a thorough health assessment with your doctor before starting any new supplement—yes, even the natural ones—as some serious side effects are possible (more info below). While I’ve included some dosage information, I did have some difficulty determining across the board recommendations, likely because these herbs often come in different forms. So you may want to get a second opinion. If you are pregnant, trying to get pregnant or breastfeeding, please avoid any and all of the following supplements as very few clinical trials have been observed. I’ve researched five of the more commonly used adaptogens, so without any further ado, let’s discuss!

o   Safety: “Generally recognized as safe” (GRAS) per FDA. In animal studies was found to cause hypoglycemia and prolonged bleeding, so avoid if you have any issues with coagulation.

o   Dosages: Vary per supplement. A 2012 study on the safety and efficacy of ashwagandha root found a significant improvement in stress and cortisol levels after taking doses twice daily for 60 days.

o   Safety: One particular extract KSM-66 has been GRAS by the FDA. Use with caution as this herb may cause hypoglycemia, low blood pressure and alter the immune system. Avoid if you have a history of any autoimmune disease.

o   Dosage: Varies per supplement. Typically, maca is consumed in powder form (though I’ve also heard of gelatinized capsules) to be added to smoothies, so you’ll want to read the label for mixing instructions.

o   Safety: More evidence is needed, but in general, Maca is thought to be relatively harmless. Most studies have been specifically geared towards sexual benefits of maca root. A differential trial showed maca root helped alleviate antidepressant induced sexual dysfunction in postmenopausal women.

o   Safety: Quality and size of studies has varied, so larger, more controlled trials are needed, though many report improvement in endurance, stamina and concentration.

Bottom line: Yes, more research would be ideal but we do know adaptogens have been prized and safely utilized in cultures for thousands of years. If you’re otherwise healthy and have the ‘all clear’ from your doc, I say give them a try and let me know what you think!

A note from Lindsey:

Very cool stuff, Sarah! As briefly mentioned above, did you know many adaptogens can be brewed as teas? For this you will need to buy them as loose herbs. A general recipe is to pour 1 quart of boiling water over one half cup of dried (not powdered) herbs and let steep for 30 minutes to 3 hours. The longer you steep, the stronger the tea will be. I suggest playing around with the strength to suit your taste. You can also add a tablespoon of dried orange or lemon peel for a little tartness or a tablespoon of dried stevia leaf for a little sweetness to change up the taste. After they have brewed, strain out the herbs and store the tea in the refrigerator for up to 3 days. I do want to say with this method there is no way to determine the potency of the teas. Sarah did a lot of research on dosage, so if you’re looking for the more medicinal effects, I would follow her suggestions. But this certainly sounds like a fun way to experiment with herbs! I am a tea fanatic, but so far have limited myself to mostly black and green tea, so I am excited to try this!

Thanks for sharing this info! I love the powders I get from Root and Bones. I have been using Reishi, Chaga and Pine Pollen. She has amazing recipes on her website too!
https://rootandbones.com/

I just wanted to say how impressed I am with this post. I’m a doctor in the UK and I really respect the time and effort that’s gone into researching this article and particularly the safety warnings. I know they’re boring but I’ve seen patients come to harm from self medicating without telling their doctor. I’ll definitely be having a try of Rhodiola Rosea next time I’m on nights!
Thanks for the article Sarah.

Good timing guys! I’ve been going back & forth between trying a morning meal replacement shake (bc I’m lazy) with vs without adaptogens and now I’m thinking with is probably worth a try ???? anything that helps settle anxiety is good in my books. ????

I’ve tried Maca root capsules and they worked like an absolute bomb. I haven’t had as much effectiveness from the powder though.
The Maca made me feel full of energy, I felt driven and healthy. My anxiety definitely eased up, and my libido picked up – I was on anti depressants, so it had dipped quite significantly.

Since reading this post I’ve been doing a little research on the “holy basil” and it also looks like it can be helpful with acid reflux which my husband has. I am excited to learn more about it to see if that could be something worth him trying. Thank you as always for these great posts!

Fascinating! So many people deal with acid reflux (my husband included) so we’ll keep that in mind.

Hey there! I actually use aswaghanda root frequently for teas! I am also a tea fanatic and love messing around with new herbs. Aswaghanda has wonderful tried and true stress relieving and libido boosting qualities. I use about a teaspoon of dried root for 1 cup of boiling water and let it steep for 10 minutes. The root itself has a very strong scent that definitely transfers to the flavor. If it helps, its very very nutty. Next on my list to try is maca!

So neat!! Thanks for the recipes and examples, I can’t wait to try myself.

I’ve never even heard of these before! So neat! My science nerd heart loves the citation at the bottom ????

I’ve been hearing all about adaptogenic herbs lately – it’s good to finally have someone professional clear things up! Helpful! Thank you 🙂