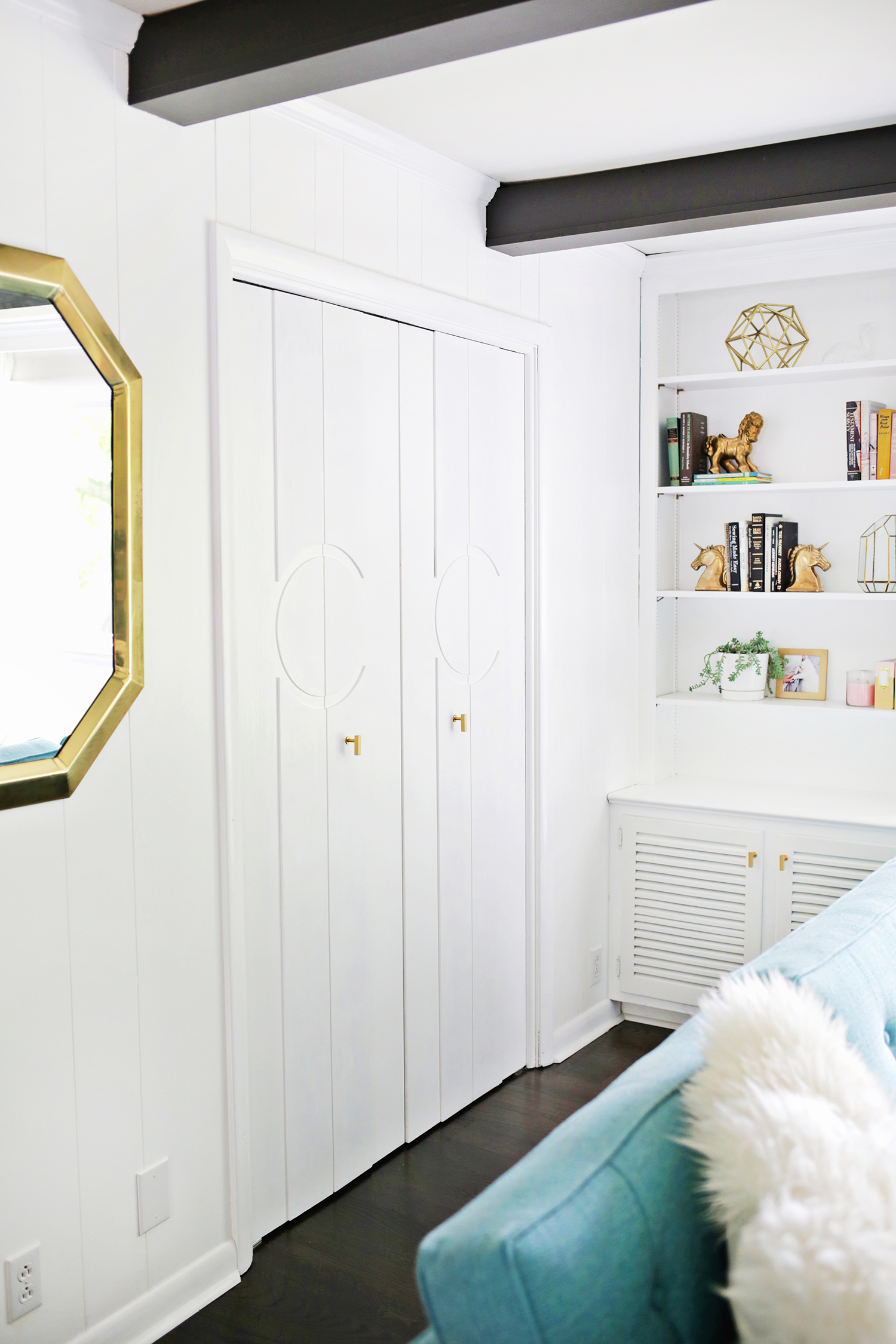 Once you start to really get a room together, it becomes obvious how important all the finishing details are. I find with most things it’s the little touches that really draw you in and keep you interested in a space. So I wanted to add some personality to as much as I could in our “soon to be finished” den area. I am still over the moon with how the DIY trim detail came out on our bedroom closet doors. So I wanted to do something similar but a little more subtle in shape and color in the den. Since the centerpiece of the room is our teal Joybird sectional (in Notion Thunderbird), I didn’t want to do a colored door again, and I thought a white-on-white scheme would make the design more subtle and not steal too much visual attention from the couch in front of it.

Since the other door project was a lot of small trim pieces put together to make the effect, I though that larger geometric shapes would give a different feel to these doors as well. I do love my geometric shapes! 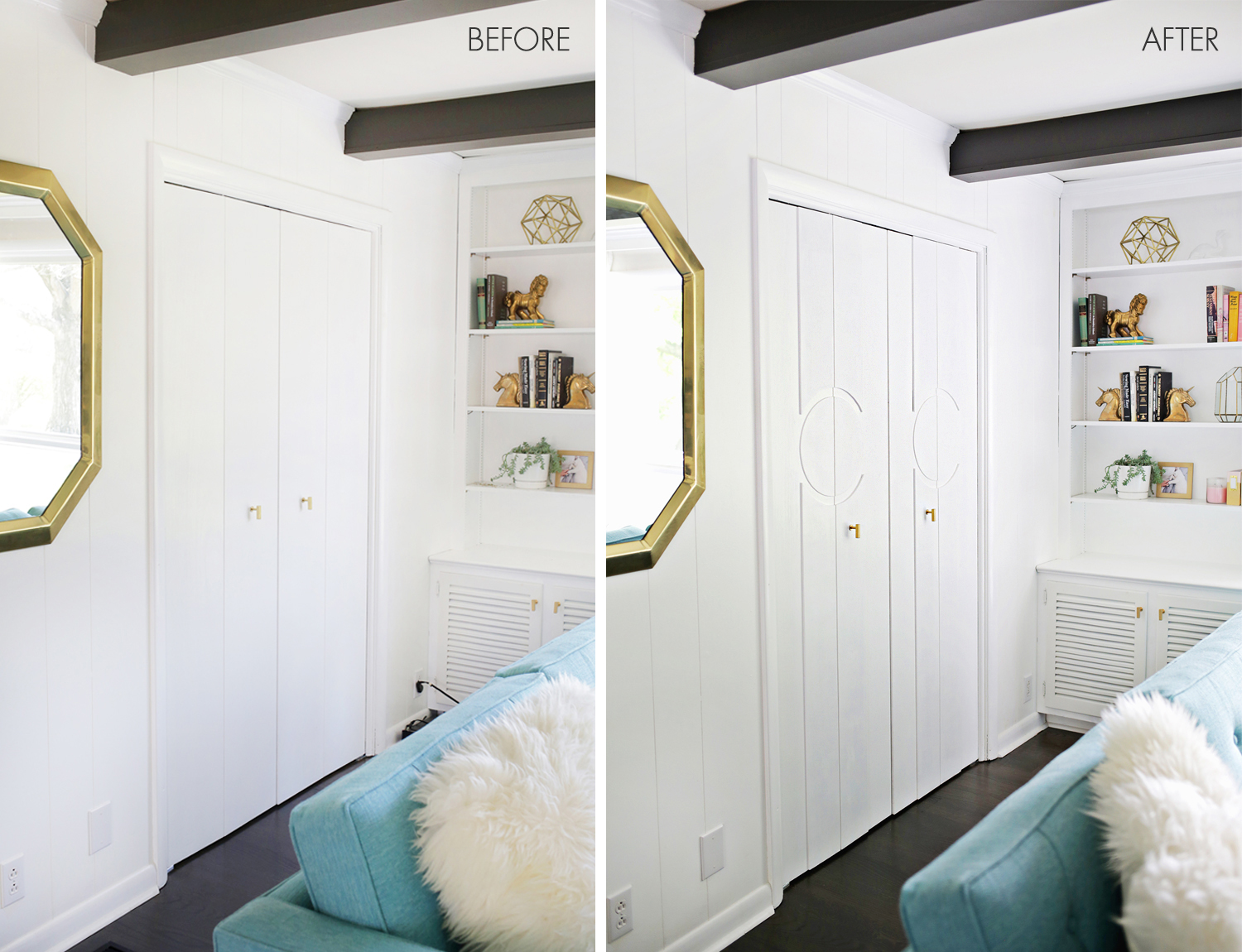 You can see that I had already painted the doors in the before photo. We had to get different doors when we installed new flooring (the floor was raised a bit), and I just got plain flat doors so I could add something special to them. It took me forever to decide what I wanted. So I painted them white in the meantime. I couldn’t find a link for the exact doors, but they were basic wooden flat front closet doors from Lowes. The difference between the two isn’t punch-you-in-the-face-crazy, but I love how it turned out, and I think they look so much more custom and special with the added pieces. Want to see how I did it? 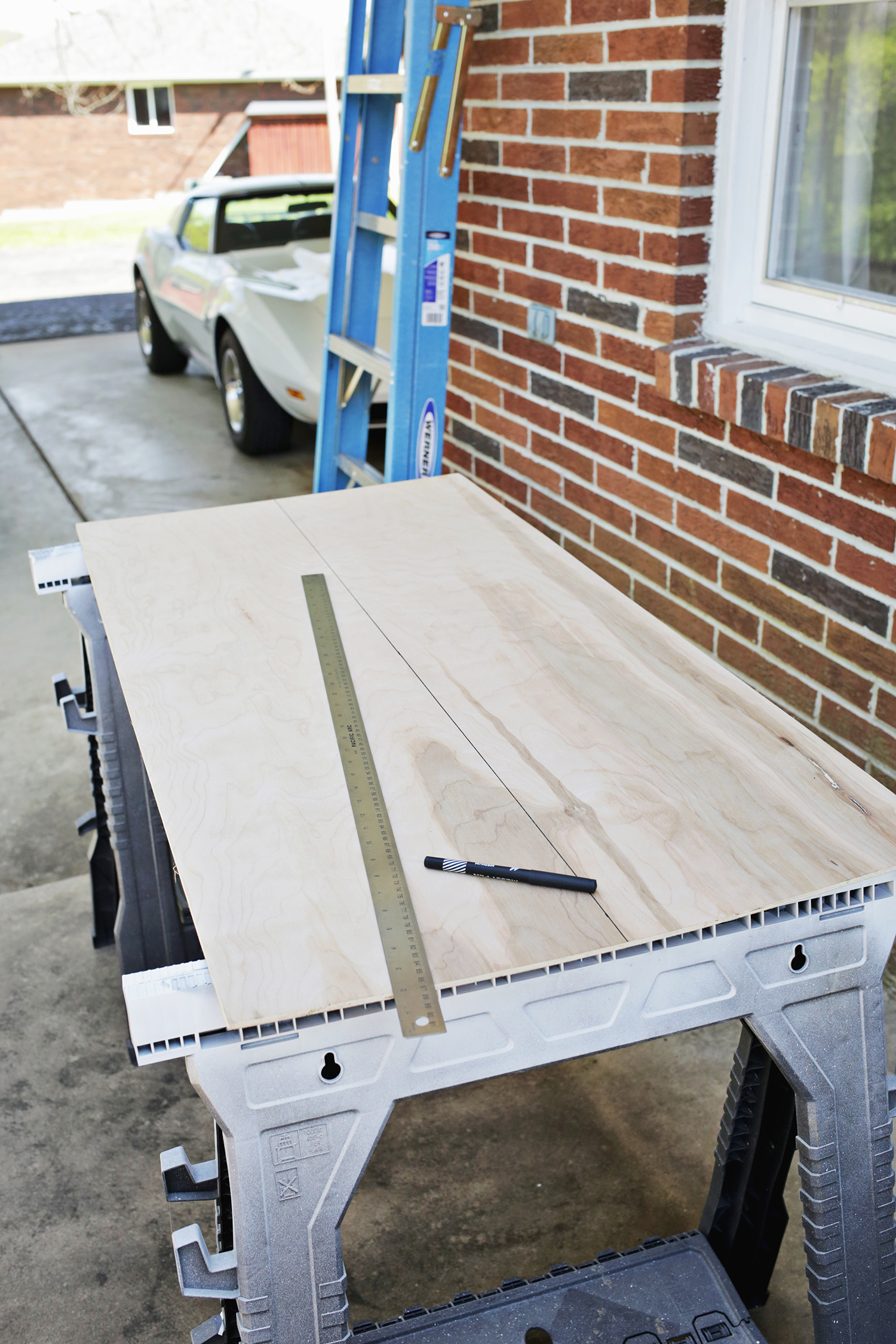 I bought two sheets of this 2’x4′ thin birch plywood and used my jigsaw to cut the sheets lengthwise down the middle into 12″ strips. Seriously, get a jigsaw. I’m going to keep telling you this… 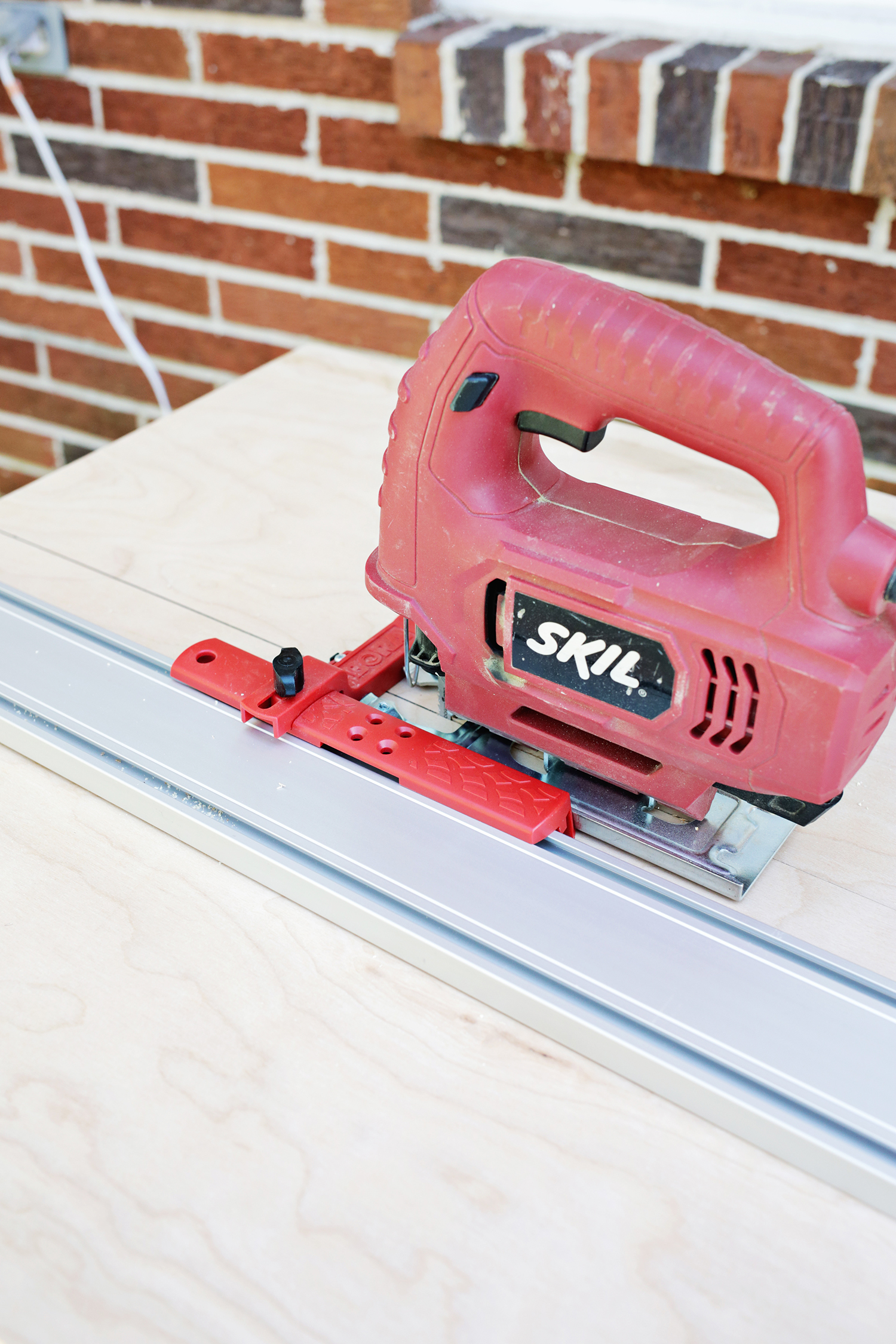 They make saw guides that you can use to keep your cuts straight. Very important on this project. 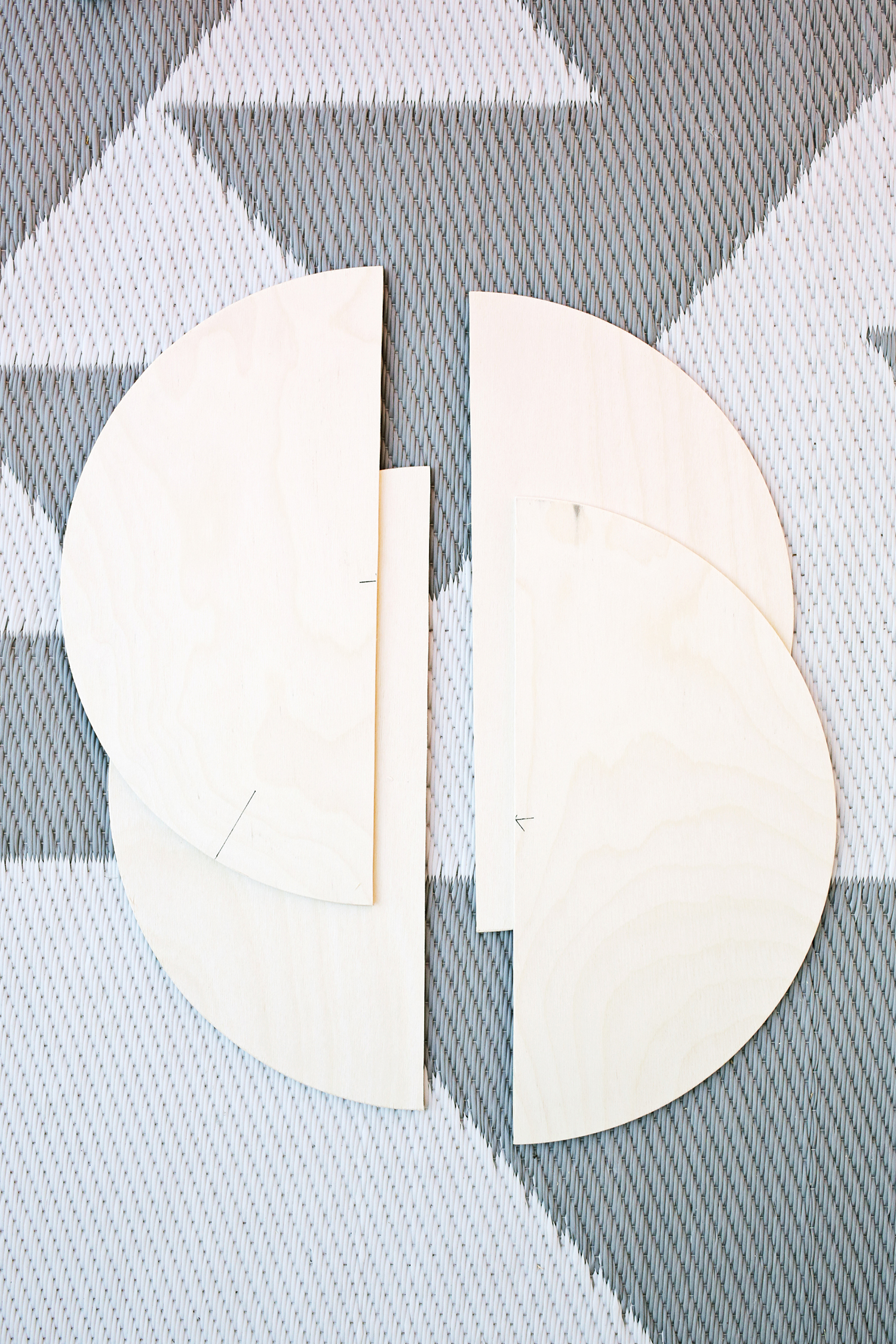 I also cut two 12″ wooden circles in half to use in the design. 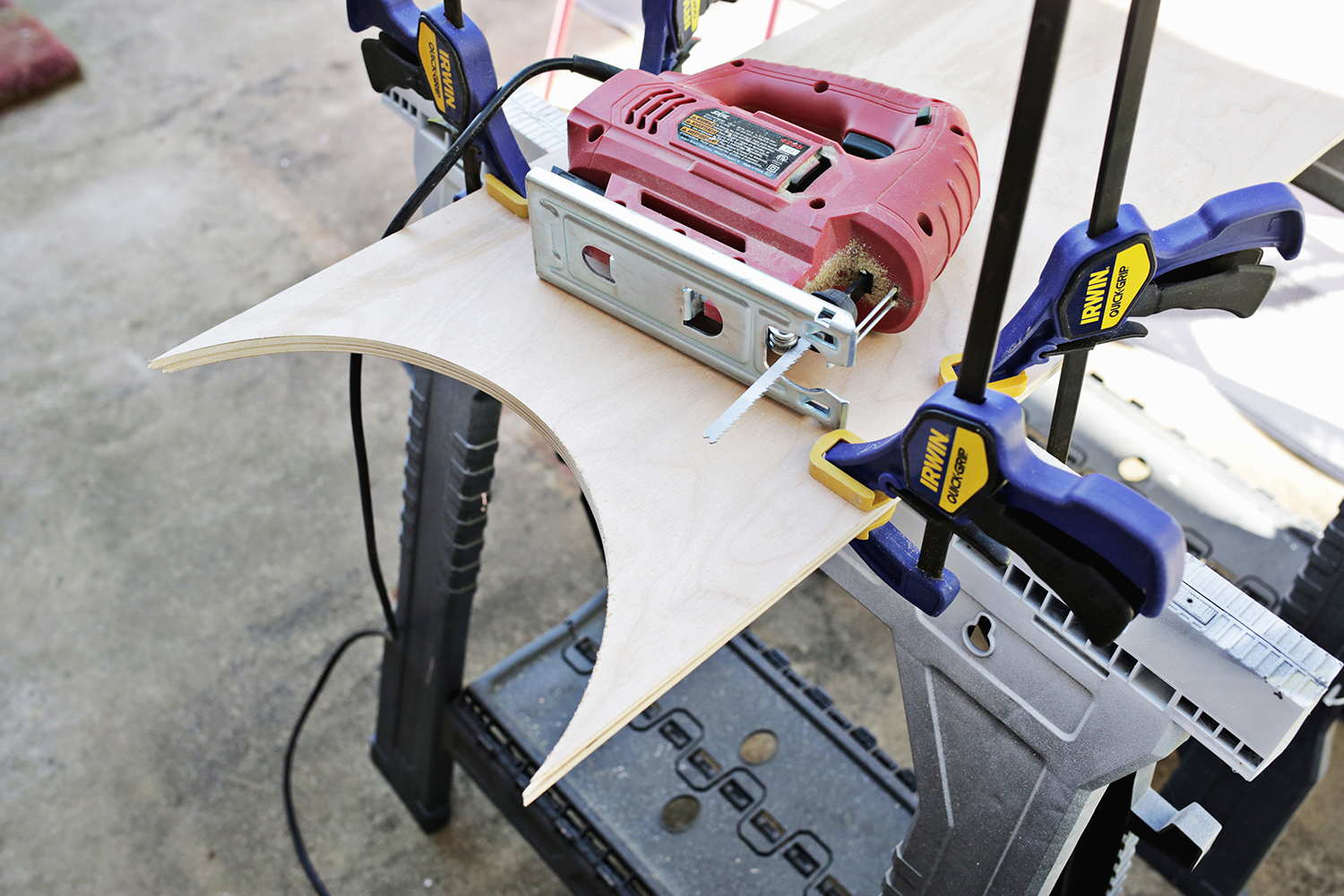 I wanted the strips of wood to mirror the edge of the circle above and below it, so I used the half circles I had cut, traced those lines, and cut the line with the jigsaw. When I went to check the placement on the door, I realized that it apparently wasn’t the right way to go about it. When I tried to center the circle 1.5″ away from the top and bottom half circle cuts, they didn’t line up or look right anymore. Apparently if you want to mirror the edge of a circle 1.5″ away from the circle, you have to trace a circle that is 3″ bigger than your original circle for it to look correct. You double the number of inches you want the mirrored line to sit away from the original circle and make that new circle that much bigger in diameter than the original. So, once I traced a 15″ circle (instead of the original 12″) and recut the wood with that angle, it looked perfect. 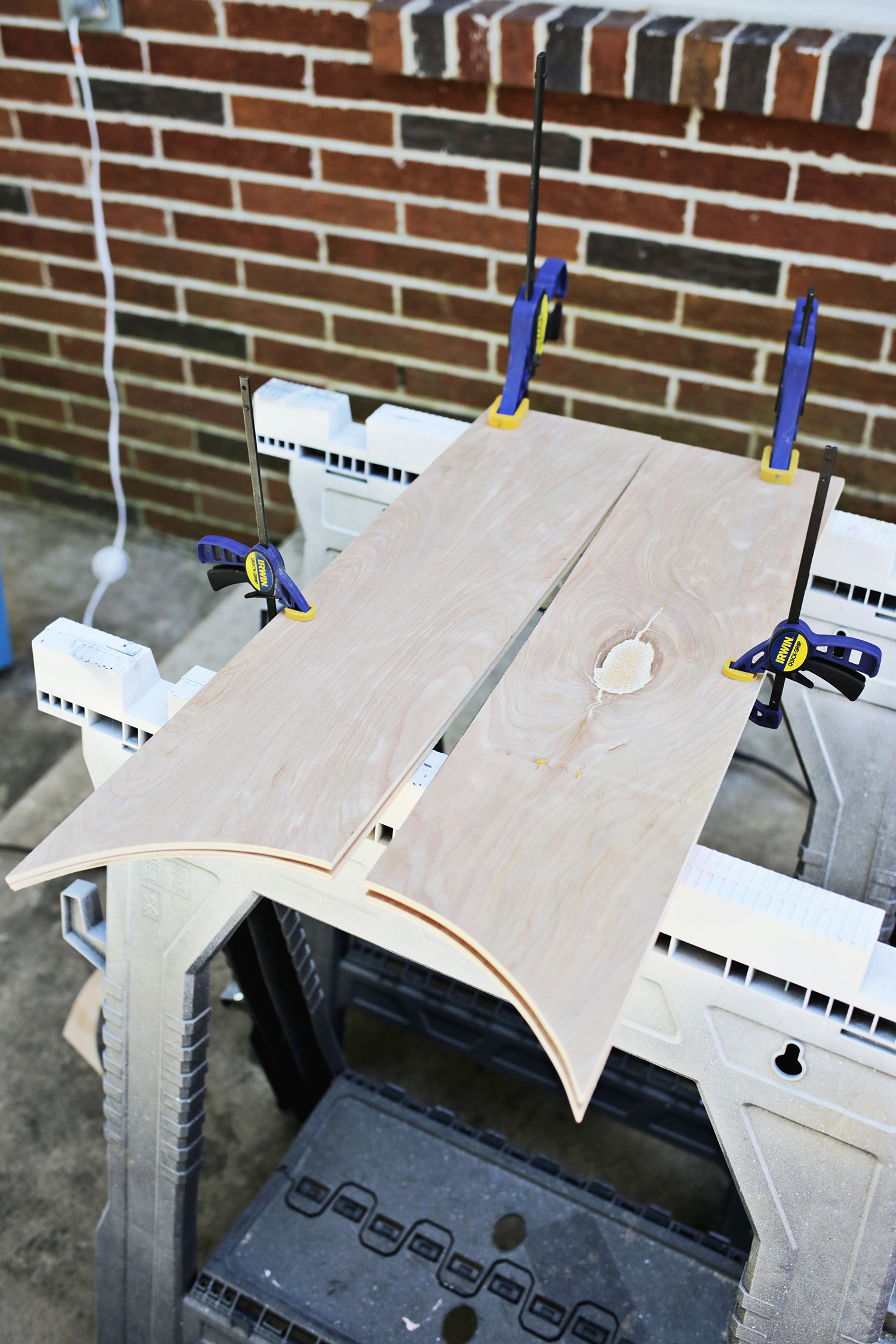 Once the circle angles were correct, I cut those panels in half again so they were now 6″ wide. 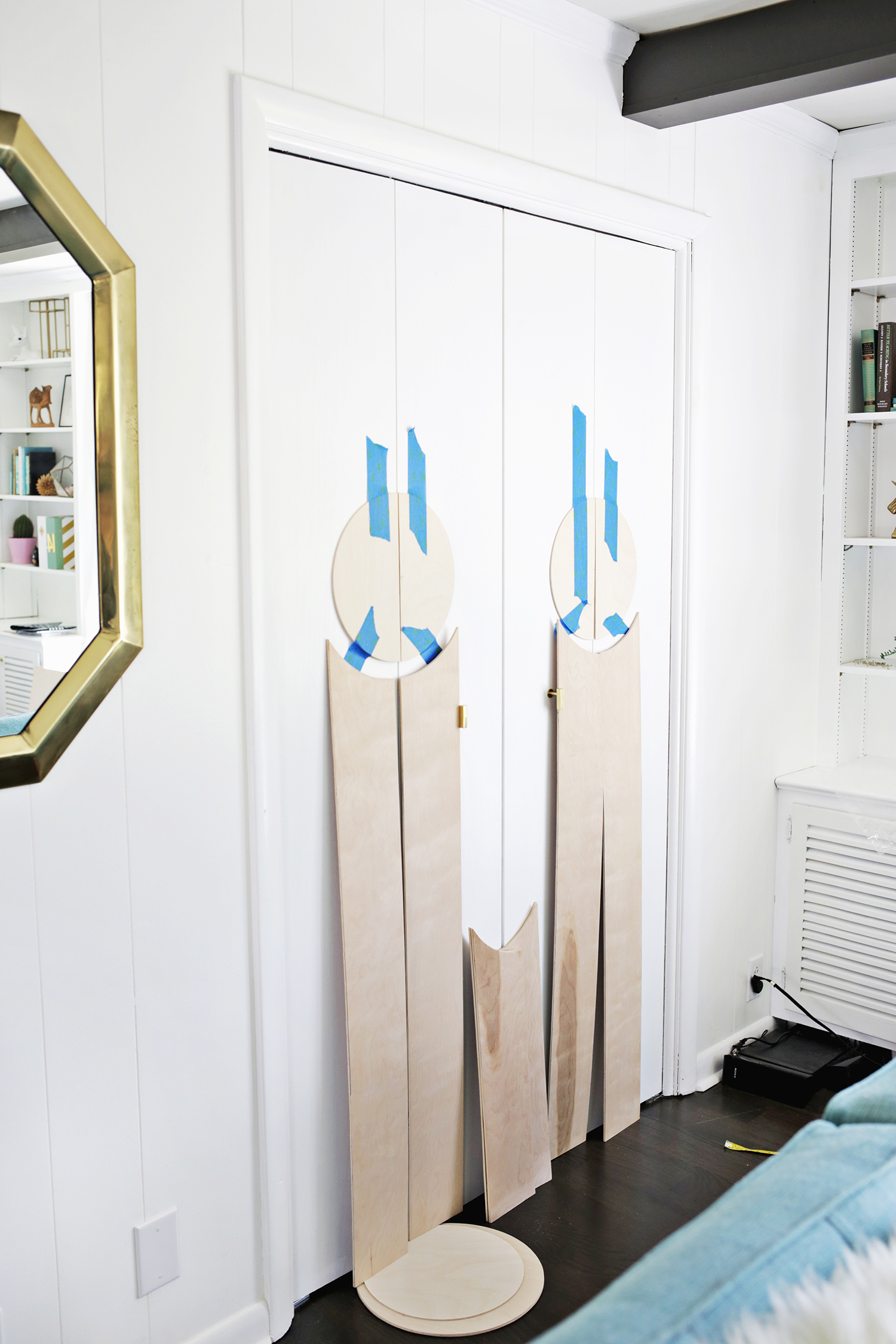 Before cutting the height of the 6″ panels, I placed the circles where I wanted them to go (I put them higher up rather than in the middle so they could be seen over the couch in front of it), and then measured how tall the top and bottom panels should be in relation to the circle. 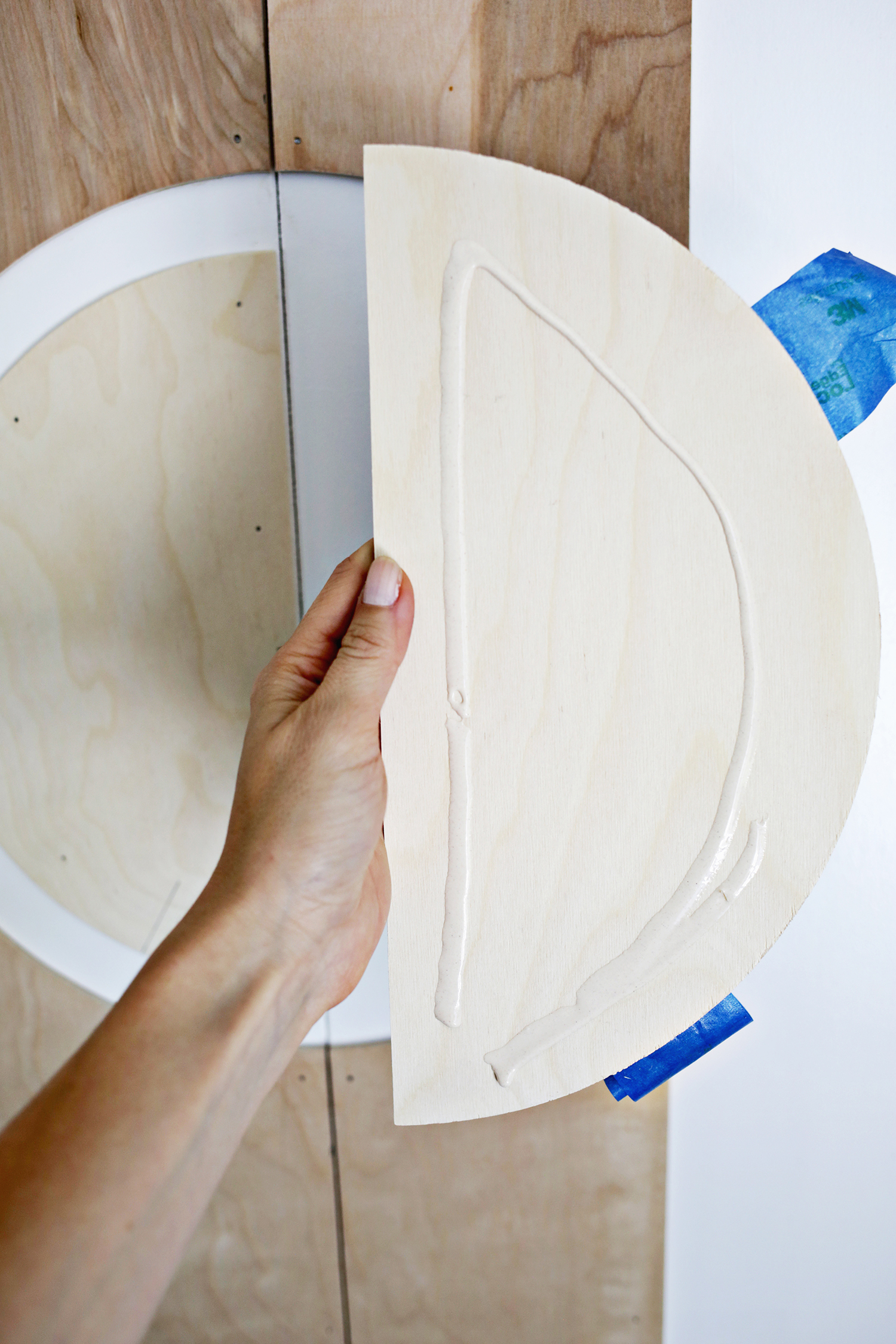 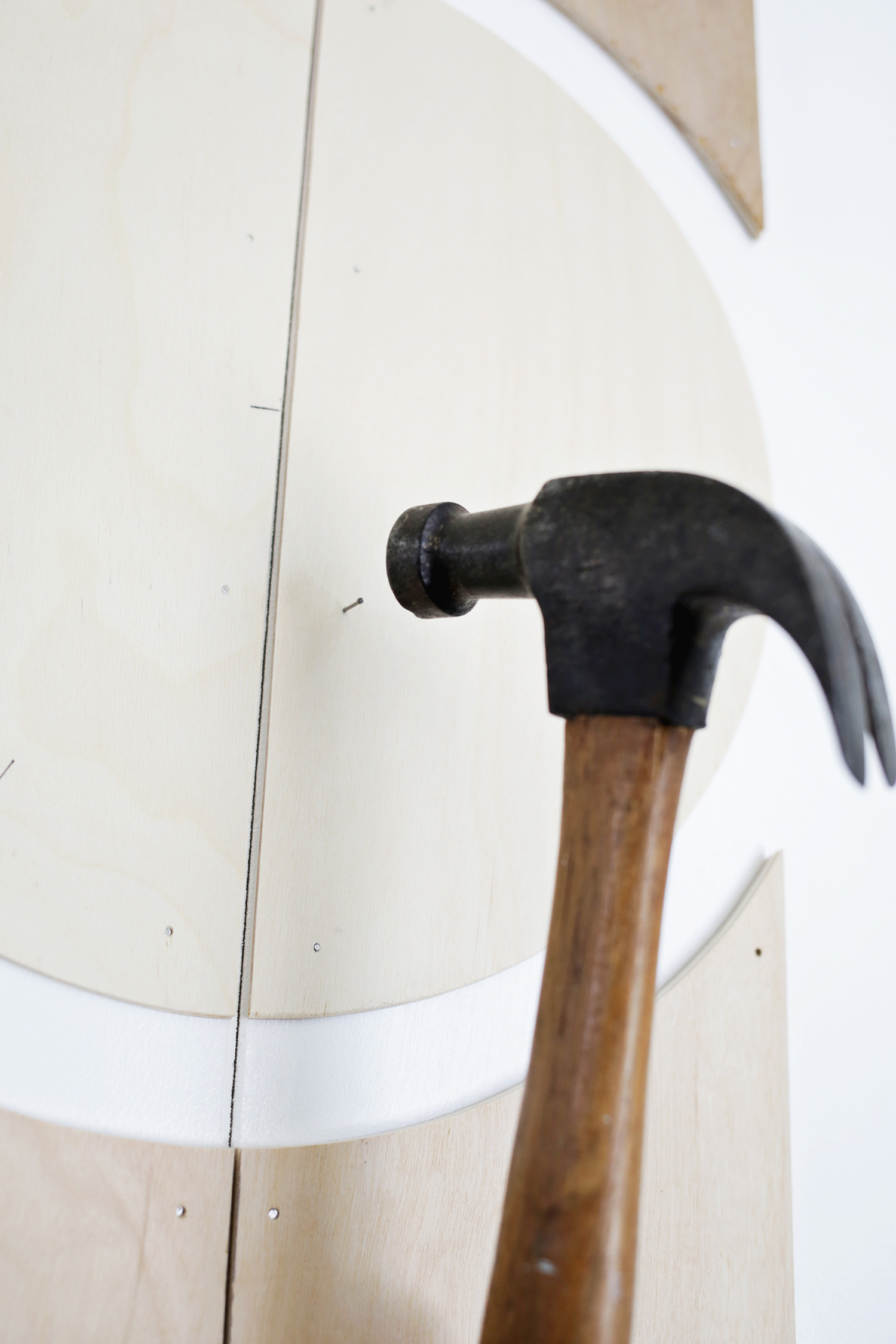 When everything was cut, I used wood glue to first glue all the panel pieces onto the doors, and then I used small nails to nail the panels in place. 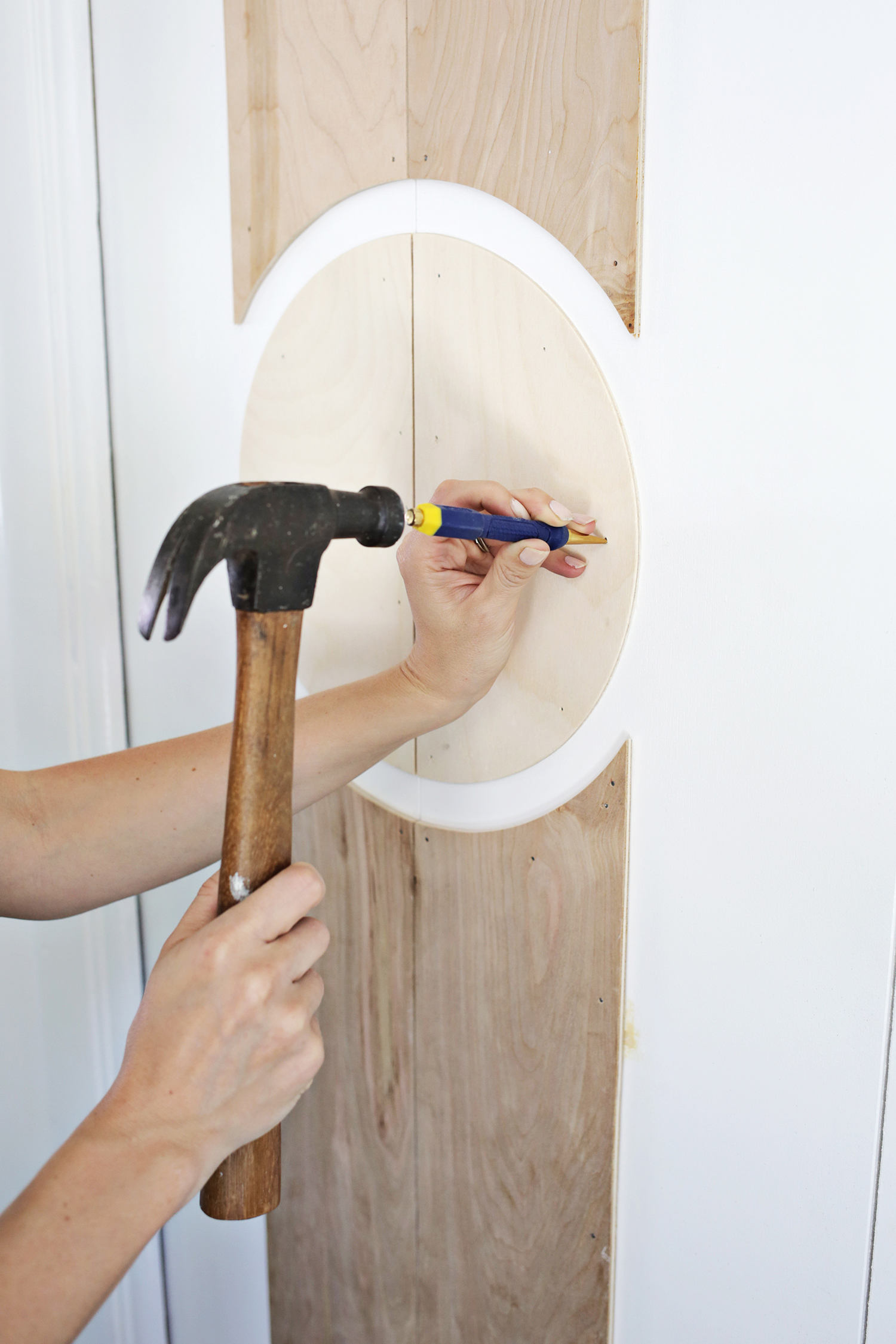 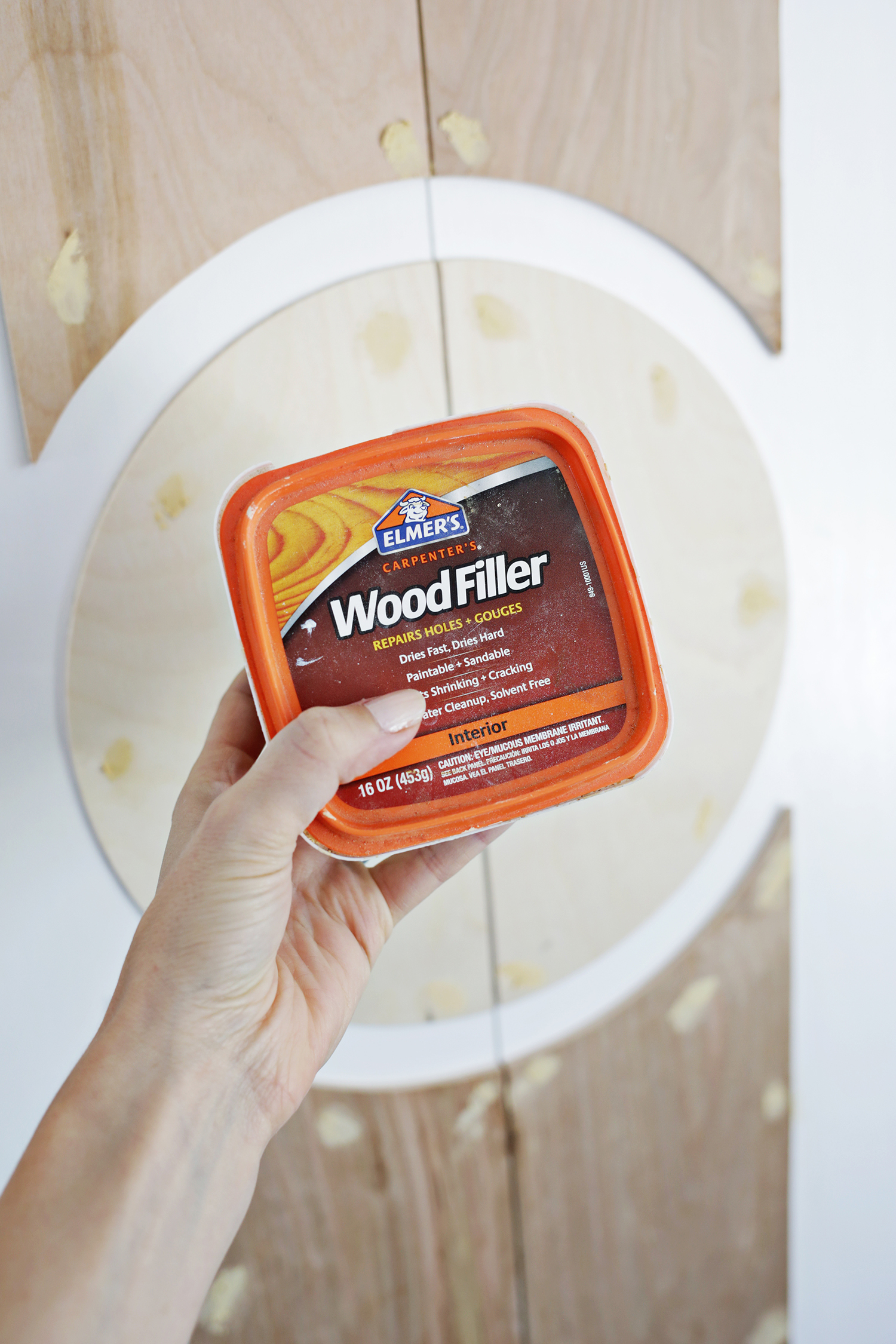 I wanted the panels to look completely seamless with the door. So I went the extra mile and used a nail setter to hammer all the nail heads further into the wood so I could fill each indent with wood filler and then sand the filler down flat. WHAT NAILS? I DON’T SEE ANY NAILS… 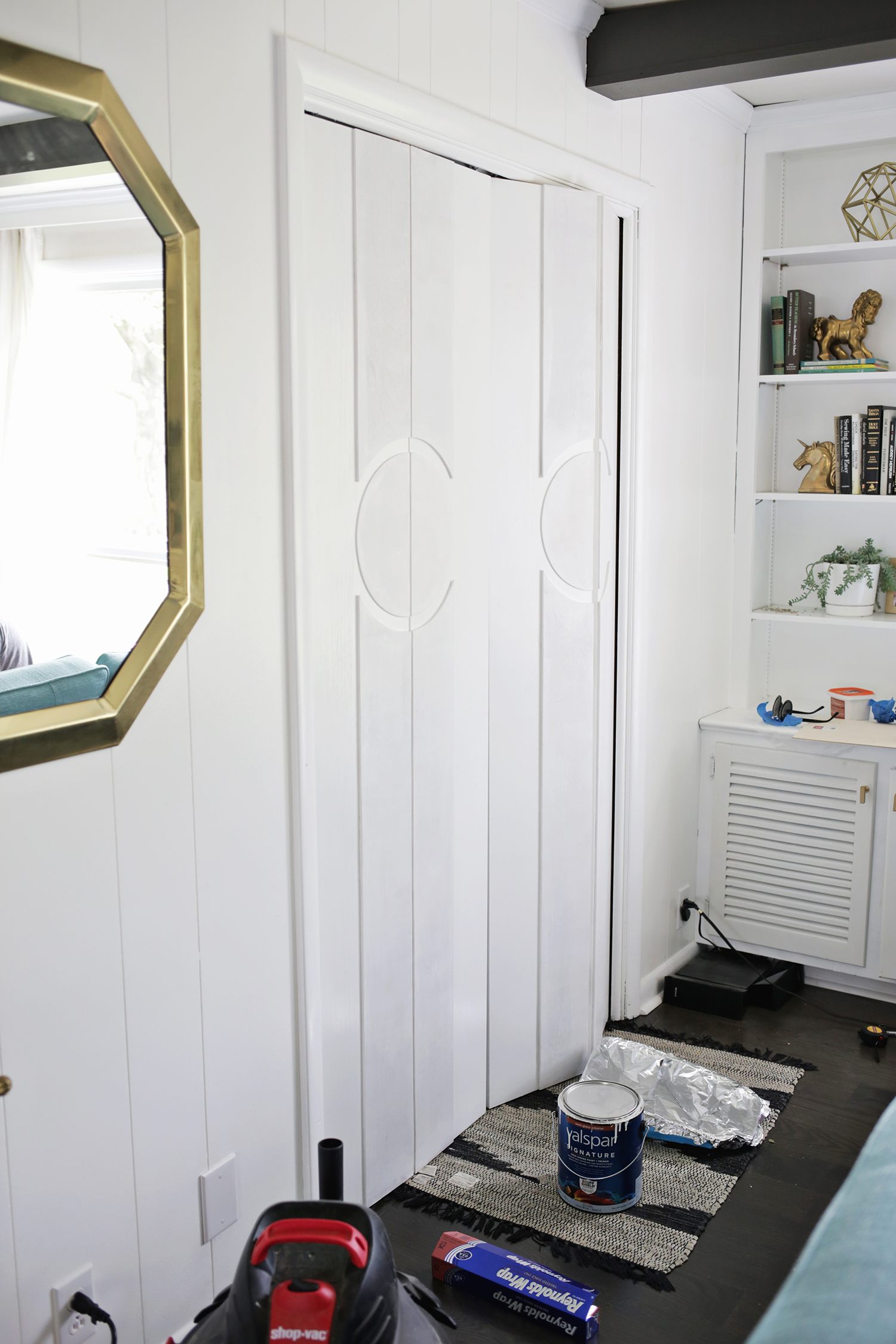 After that, it was time to paint the panels to match the doors! When the paint was dry, I drilled new holes to install the hardware in a slightly different spot to accommodate the panels, and I was done! 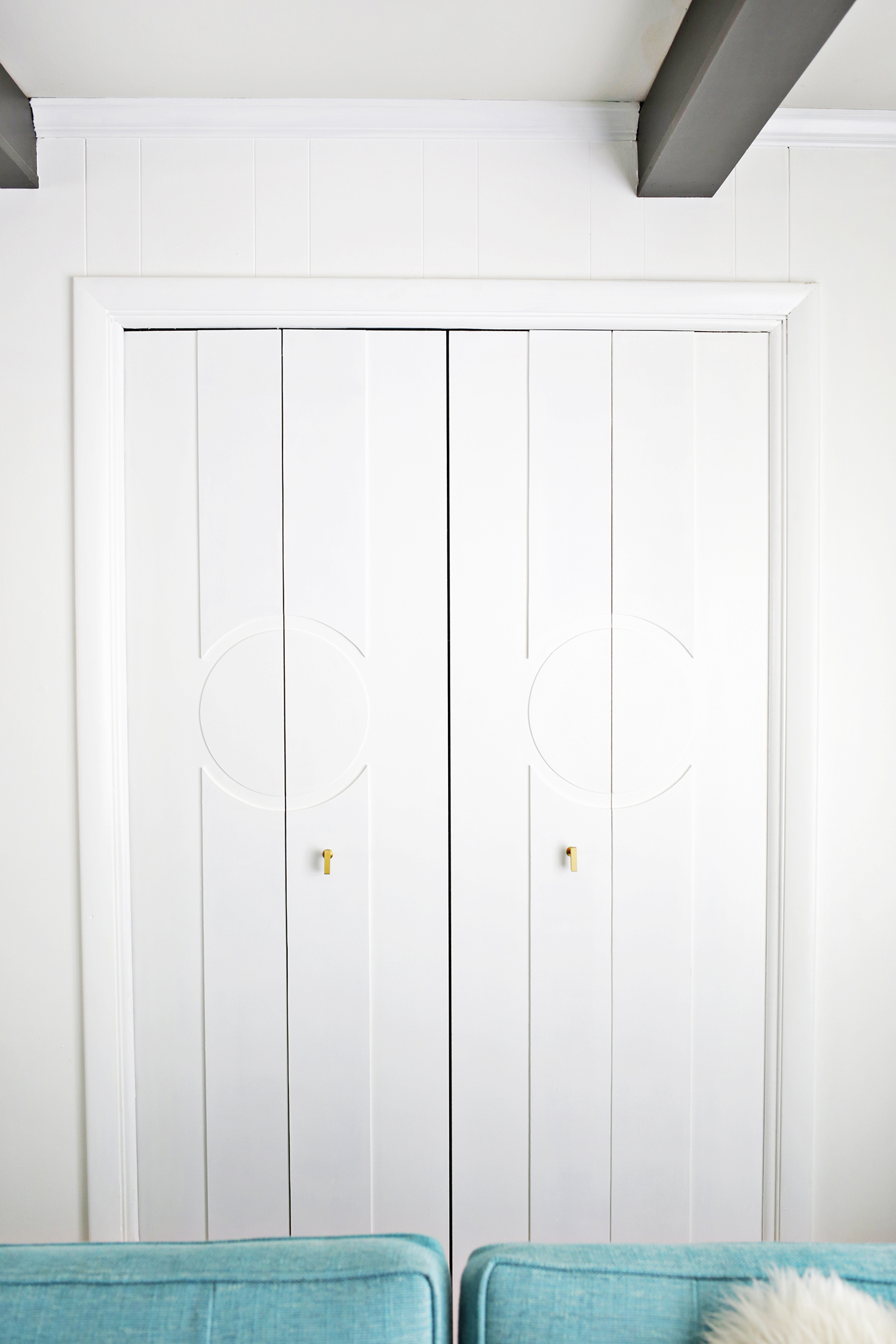 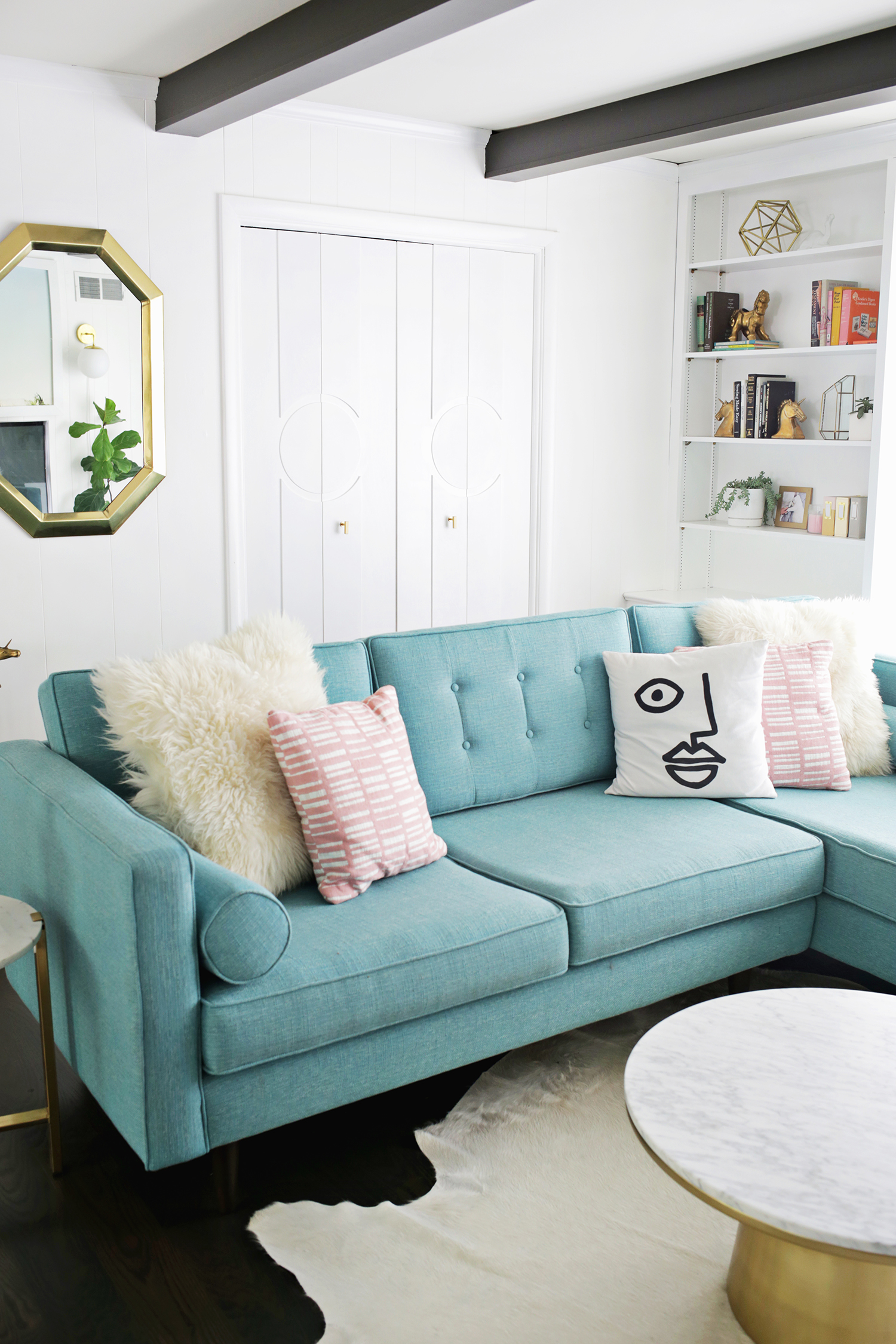 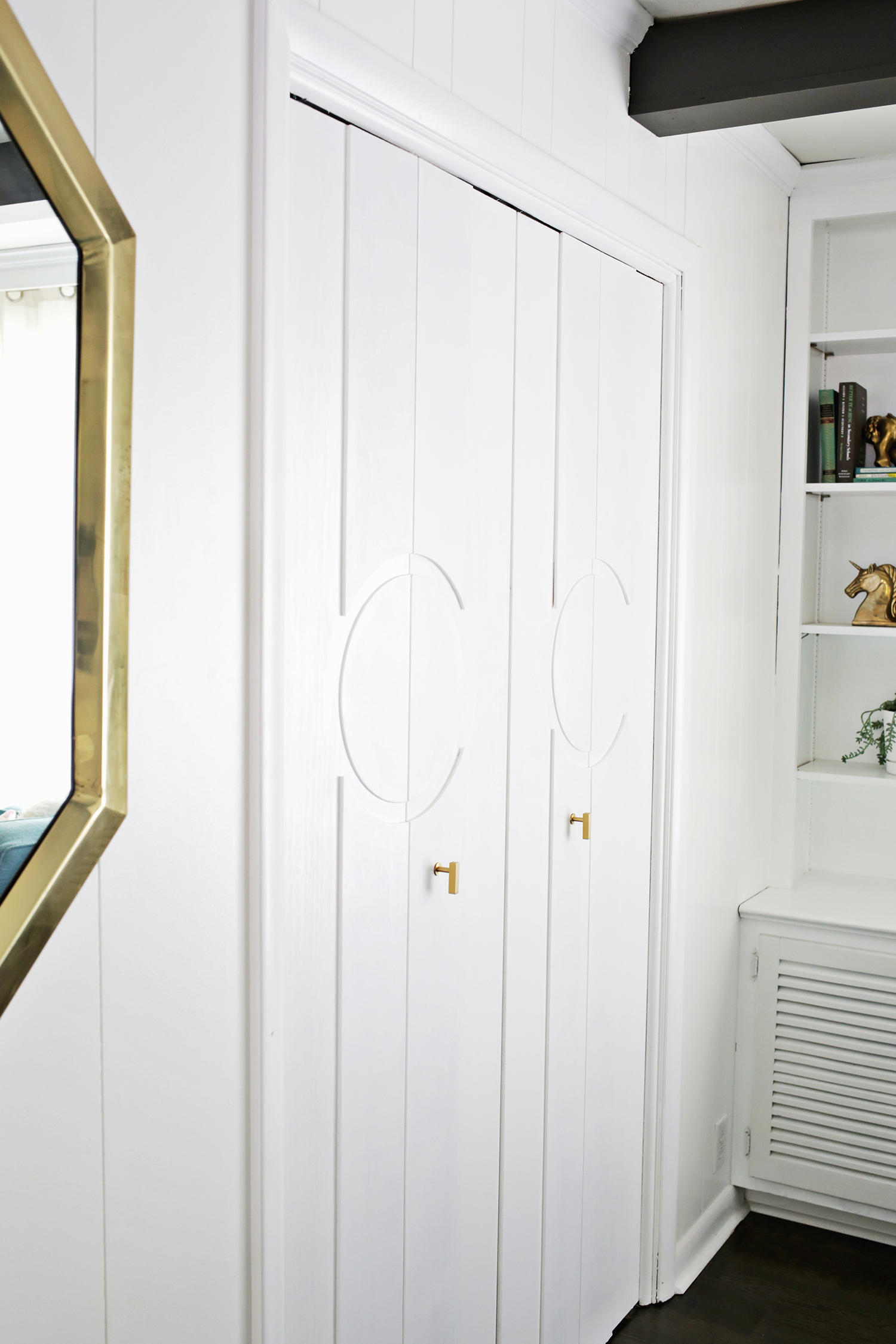 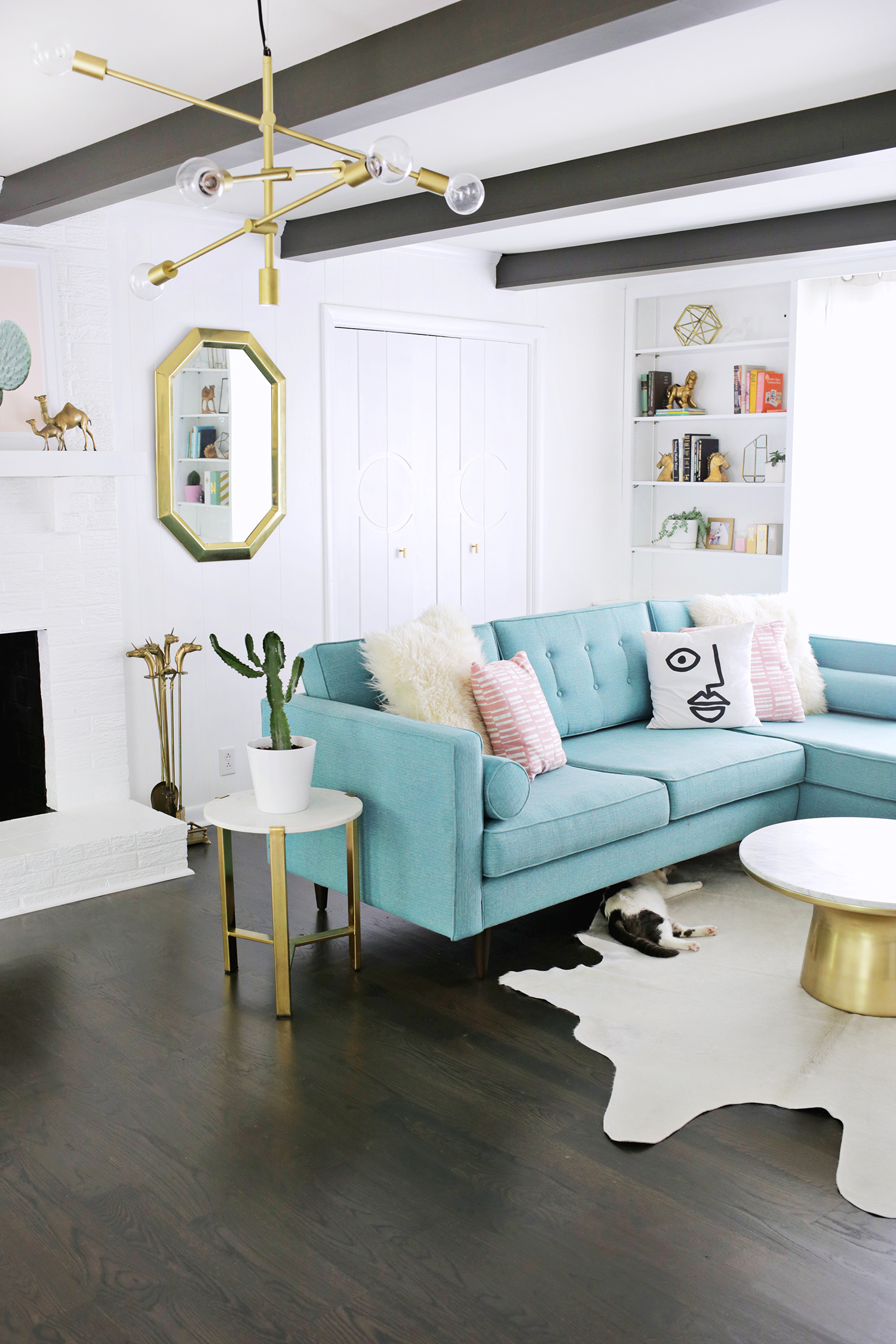 I think the monochromatic pattern adds just the right amount of interest to the otherwise boring doors while still letting the pretty couch in front of it be the star of the space. I like that the mirrored circle pattern of the doors have a mid-century feel but also remind me of the swinging doors to the kitchen in a fancy French restaurant type of place. I love to make what could be basic a little more custom and get that personality of the house into as many aspects as I can without everything competing for visual attention.