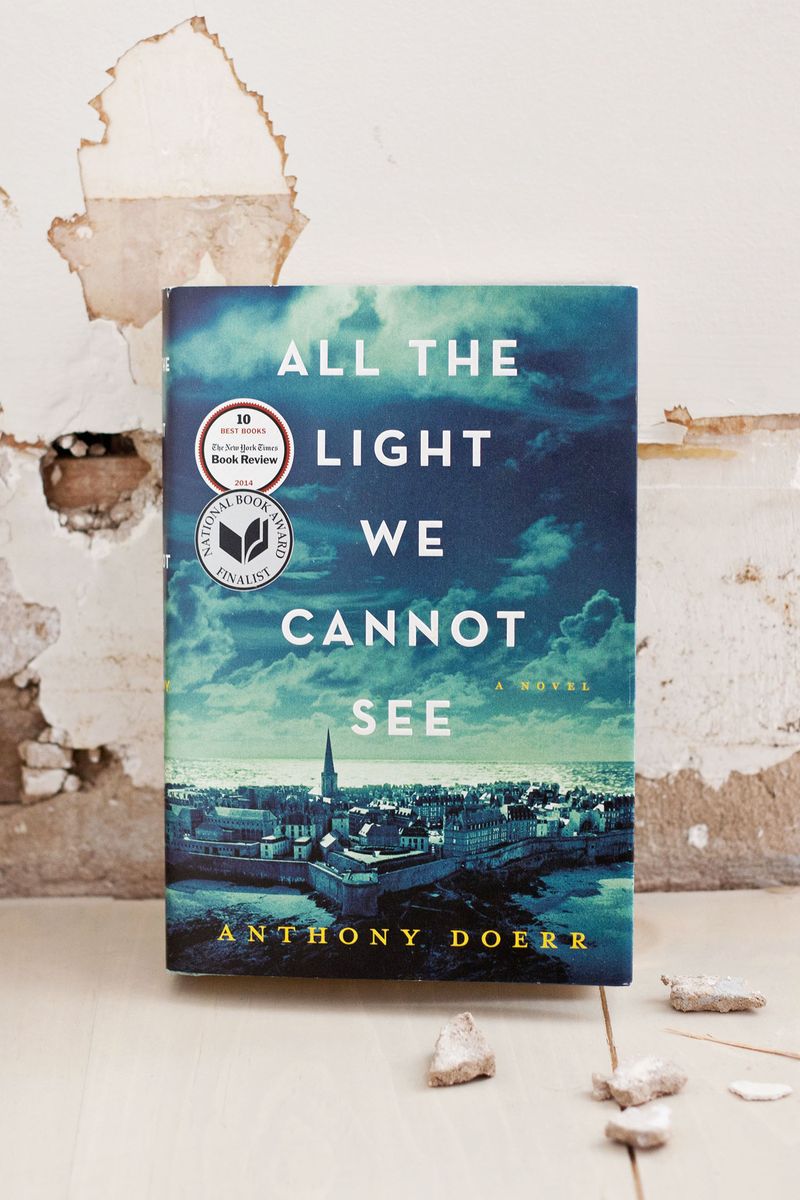 Hi, guys! I hope you all enjoyed this book as much as I did. For me, trying to pick out one book to read is like picking out my favorite star…I pretty much like them all because they’re all brilliant in their own way! (OK…maybe not ALL, but you get the idea.) But after reading reviews about All the Light We Cannot See, if felt like the right one for this month’s book club.

I’ve read so many WWII/Holocaust novels both fiction and nonfiction, watched documentaries, seen movies, been to museums and concentration camps, etc. I used to be obsessed with the topic throughout junior and high school. So I was actually a little hesitant to read this book because I feel like I’ve covered that topic pretty thoroughly for myself, but I was pleasantly surprised to find a completely new take, new viewpoint on the subject. I don’t think I’ve ever read a book from the standpoint of a Hitler youth. It was fascinating and horrifying at the same time to watch the brainwashing taking place and how Werner reacted to all of it.

On top of that, Anthony Doerr’s writing is so beautiful. It was such a pleasure to read just for the sake of the writing. Moehringer, author of The Tender Bar, said, “Anthony Doerr sees the world as a scientist, but feels it as a poet…” I think that sums it up precisely. I haven’t read any of Doerr’s other works, but I definitely intend to. How about you?

OK…I could talk about this book endlessly, but this is a post, not a dissertation! So let’s get to some questions! (THERE WILL BE SPOILERS!)

This is always a big deal to me, but I know not everyone thinks about it. I can hate a story but love the writing, or vice versa. In this case, I loved both the story and the writing. I love a book that's a page turner yet savory at the same time. You can't wait to read the next sentence, but you can't help but dwell on the one you just read because there's so much meaning packed into it and it's just so beautifully and well-written. This might seem a bit sentimental or dramatic, but nothing pleases more than a well-constructed sentence. Except maybe a well-constructed dessert. :) So Doerr’s style suited me perfectly. I love poetic, beautiful, well-written descriptions, but not when they go on for pages. He was so succinct, putting a whole world into one sentence. Like this one when he was talking about the boys at school with Werner, “They are each a mound of clay, and the potter that is the portly, shiny-faced commandant is throwing four hundred identical pots.” I was underlining so many great sentences that I just stopped at some point because there were too many!

2. Along with style, how did you feel about the time going back and forth between future and present?

Usually this doesn’t bother me in a novel, and I often like it. But in this book, I didn’t. I feel like it would’ve been easier to understand and just as dramatic and interesting if it had been written chronologically. There was so much intensity at the end of the story that kept getting interrupting by returning to the present. So I wasn’t crazy about that. But that’s just me!

I loved all the characters and how they were developed and the roles they represented, but I really loved Madame Manec and the part she played in the story. I have a thing for spunky women, and she fit that role to a T. 🙂 I was so excited for her when she got involved in the resistance, and a couple of her lines seemed to sum up the book for me. “‘Seventy-six years old,’ she whispers, ‘and I can still feel like this? Like a little girl with stars in my eyes?’” Doing something right, noble, just brings life to your veins, is rejuvenating.

And then this conversation between her and Etienne when she’s trying to get him involved:

4. What do you think? Do you agree with Madame? Is doing nothing a kind of troublemaking…as good as collaborating?

I tend to agree with her. This was something Werner had to deal with when he stood by and watched Fredde get bullied and beat. Think of all the people who stood by and did nothing. If they had all risen up and done something, what changes might’ve been made, people been saved so much sooner? You can’t redo history, but you can stop it from being repeated in the same way. I’m getting preachy…let’s move on. 🙂

5. What did you think of the main character being blind? How did this change the story for you?

I thought it was fascinating to “see” through Marie-Laure’s eyes. I thought Doerr did an excellent job of helping us use different senses to imagine what was going on in the story. Though because she’d had help all along, it wasn’t until everyone was gone that I really was able to imagine what it would be like to be blind. (As much as one can without actually experiencing it, of course.) I felt terrified for her and terrified at that thought of not being able to see and especially having no one to help you see. I thought this gave an extra texture to the story that wouldn’t have been there otherwise.

6. Is it easy or difficult for you to believe in curses and things of that nature? The supernatural, if you will? More specifically, did you believe that if Werner had had the stone at the end, he might’ve been saved?

Though I thought the ending was tragic and not the way I wanted it to go, I felt like Werner did the right thing by letting that cursed stone go. It was the best way for him to end his life…doing the right thing, which he’d struggled to do all along. Even if it wasn’t truly cursed, it was obviously causing problems for people who obsessed about it and just seemed like a dangerous thing to have around. Do I think he would’ve survived if he’d had the stone with him? That’s hard to say…especially since this is fiction, but the romantic dreamer in me wants to believe the stone would’ve saved him, and then he could’ve gotten rid of it. :)

7. Was anyone else annoyed by the conversations that happened at the end of the story???

I wanted Jutta and Volkheimer to have a much deeper conversation, and I wanted the same for Jutta and Marie-Laure. There was so much to say and so much that was left unsaid. I especially wanted Jutta to tell Marie-Laure that Werner loved her. A person can live on that kind of information for a lifetime! But perhaps the past is best left in the past, and it’s best to leave old wounds alone. But no, I would’ve wanted to know the person who saved me was also in love with me.

8. What did the title mean to you?

At first and even throughout the book I felt that it was talking about goodness that we can’t see. Of course, with Marie-Laure being blind, the title could be read literally for her. But Doerr explains that he meant it literally…as in the literal light we can’t see such as in radio waves, and he also meant it metaphorically. He said, “…that there are countless invisible stories still buried within World War II — that stories of ordinary children, for example, are a kind of light we do not typically see. Ultimately, the title is intended as a suggestion that we spend too much time focused on only a small slice of the spectrum of possibility.”

I could ask a million more questions about Werner’s training, the events with Fredde, what happened to Jutta, etc. This book was so rich. But I’ll let you have a turn now! Feel free to discuss anything about the questions above or add anything that really stood out to you that we haven’t covered yet. Looking forward to reading your comments! -Sarah

P.S. Big thanks again to Sarah for moderating this month! Also for any of you who have asked, we will be taking a break from the book club next month. I'd like to change up how we present it and offer interaction, so we're looking into ideas on that in the mean time.