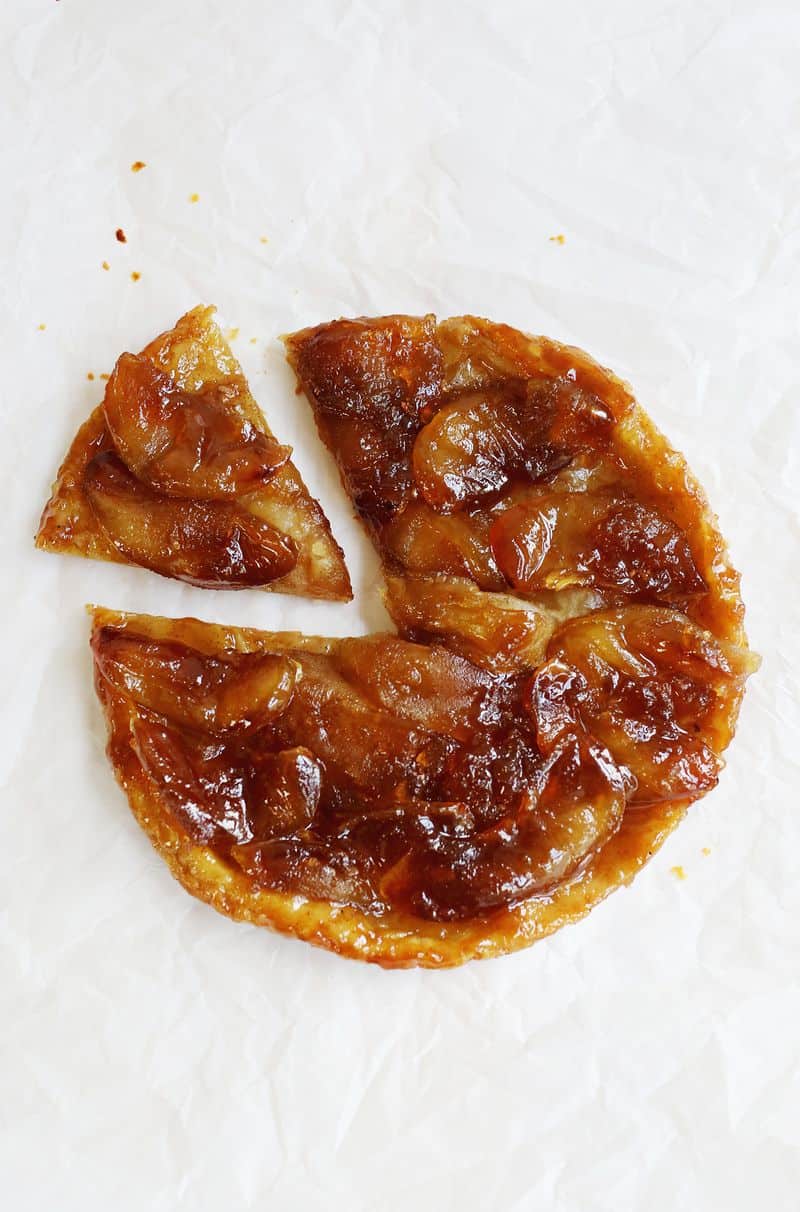 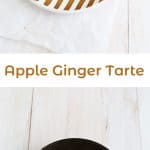 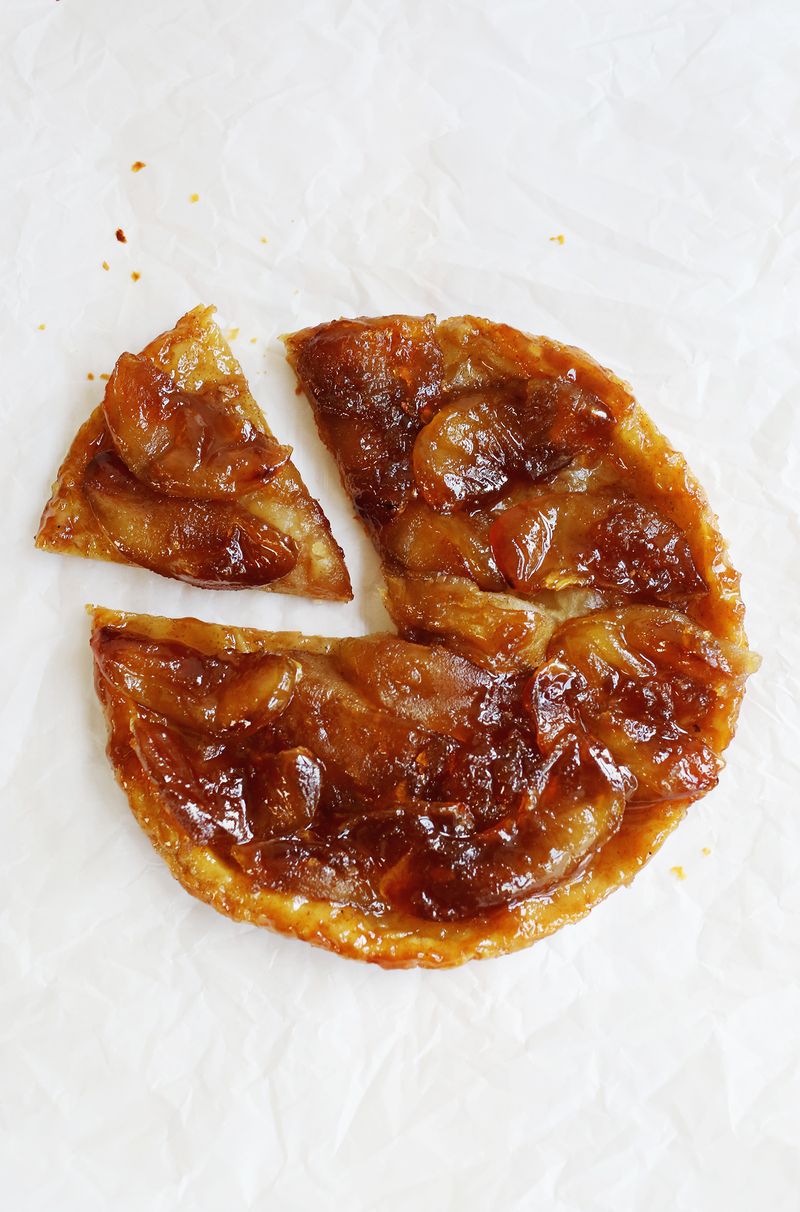 Every year around this time I share some kind of version of an apple pie. It’s sort of a tradition for me. In 2011 we made baked apples together. In 2012 I shared a spiced bourbon apple pie (adding bourbon to recipes was, and is, a passion of mine). In 2013 I shared a cheesy apple pie—so good but, yes, kind of weird. And last year in 2014 I shared a crustless apple pie you can make in a slow cooker.

So, yeah, I’m definitely not a purist when it comes to apple pie or baked apple treats in general. What can I say, I like changing it up all the time. 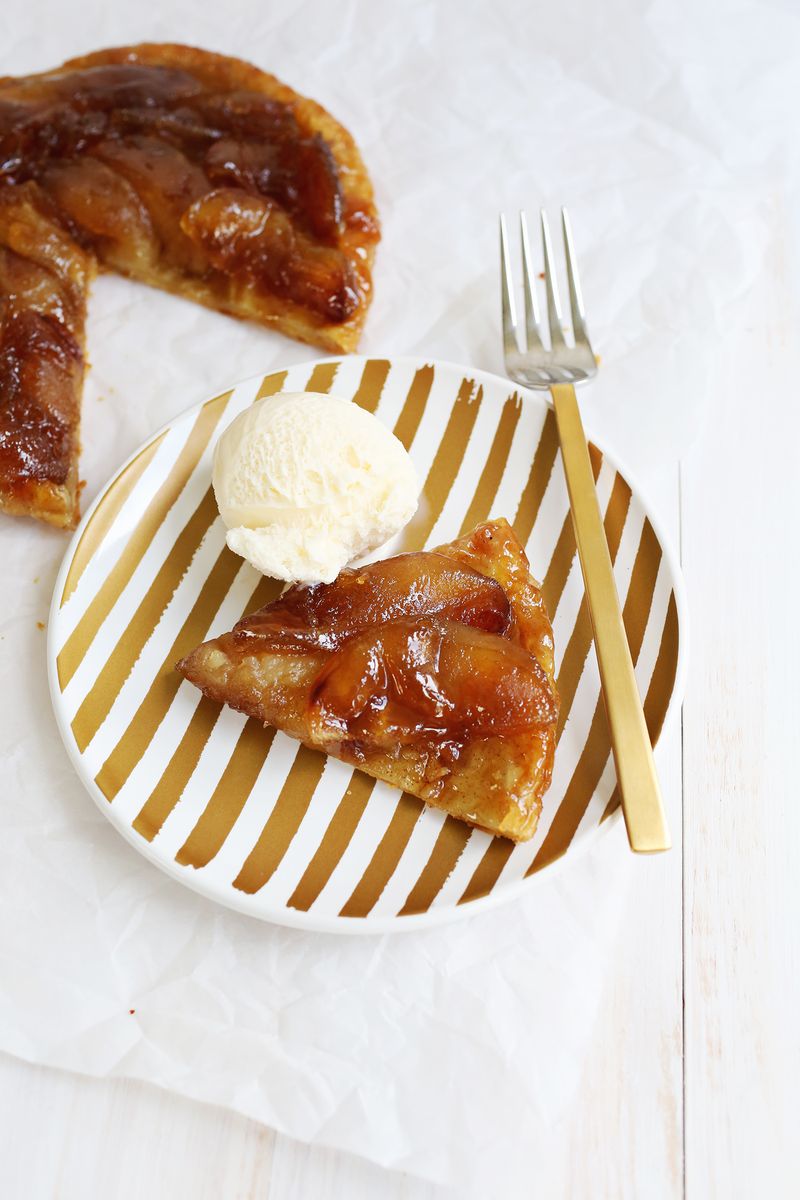 This year I didn’t bake an apple pie (although I might sometime this year for family, seems pretty likely). I’ve always wanted to make a classic apple tarte tatin because they are so pretty when I see them in cookbooks and I’ve never had the pleasure of being somewhere where this is served. So I just wanted to try it and see what it was like.

Oh man, you guys, this is NUTS delicious. The apples basically turn into candy while you cook/bake them. So good. I am definitely going to make this for friends sometime just because I want to BLOW THEIR MINDS (and taste buds).

I really can’t take much credit for this dish. Since it is a traditional dish, I was working from a recipe found in Dessert of the Day

. I had to change up the ratios because I had a different size cast iron pan than what the original recipe calls for. Plus the original uses pears instead of apples. But other than that, it’s pretty darn similar. If you like desserts, check out this book. It’s big and full of pretty food photography, which is what initially drew me in. I certainly haven’t tried everything from this book, but this recipe turned out great. So I have a feeling it’s a winner. 🙂 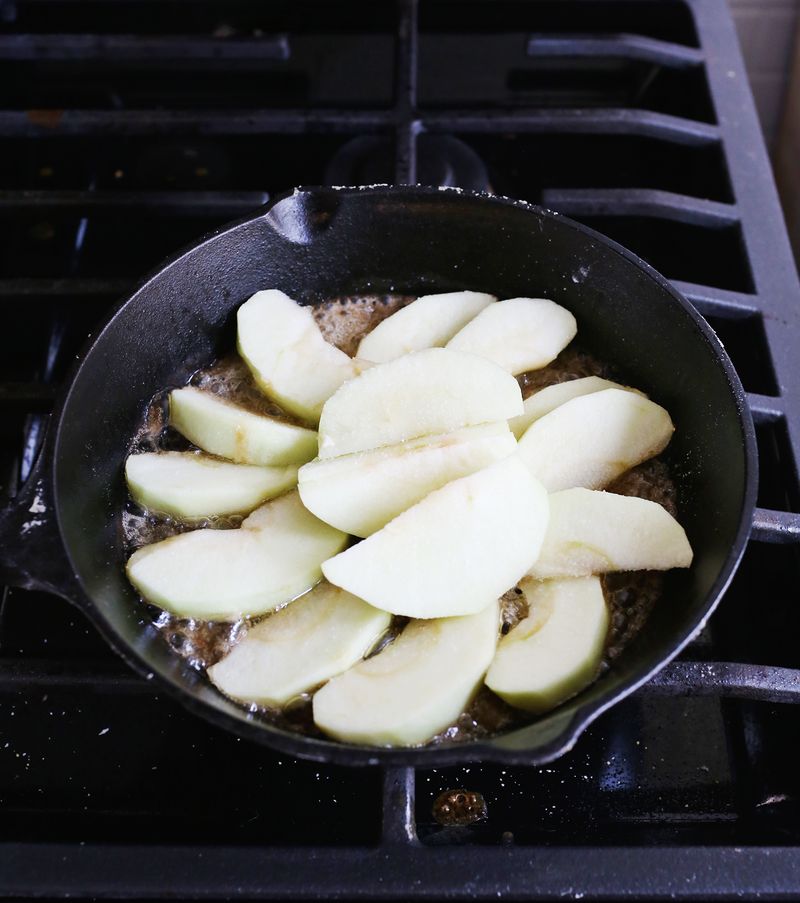 Apple Ginger Tarte Tatin, makes one 8 inch round pastry. Serves 4-5.
Adapted from Dessert of the Day

Peel the apples and slice into thick pieces. Melt 2 tablespoons butter in an 8inch oven-safe pan (I used a cast iron skillet for this). Sprinkle the granulated sugar over the melted butter. Arrange the apple slices on top. Let that cook on medium/low heat for 6-8 minutes. The apples will begin to release liquid and the sugar and butter will begin to bubble a little.

In a small bowl combine the brown sugar, chopped ginger and cinnamon. Sprinkle over the apples. Place your trimmed puff pastry over the top and carefully tuck the edges in with a fork. Prick a couple holes in the puff pastry to allow air to escape. 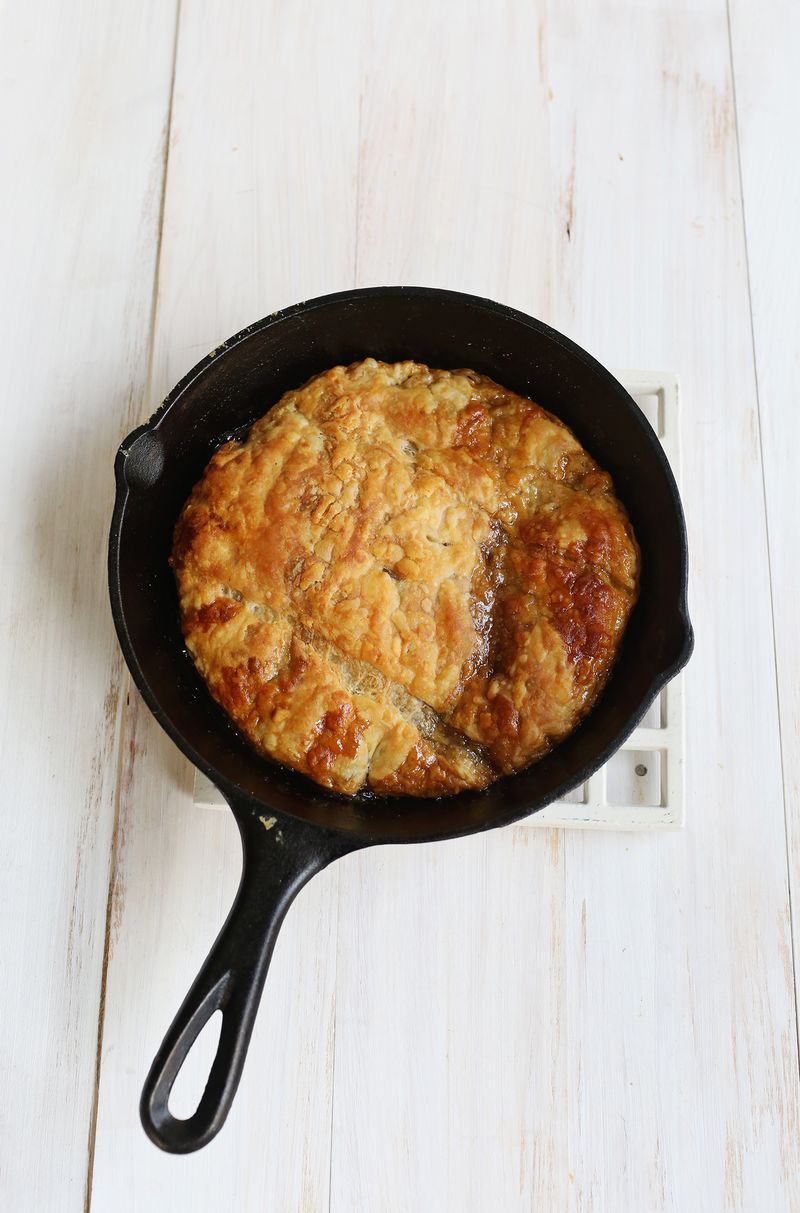 Bake at 400°F for 22-25 minutes. The puff pastry should look toasty and golden brown, but not burnt. Remove from the oven and allow to cool for 5 minutes.

Carefully run a butter knife around the edge of the pan in between the pastry and the pan, helping the pastry release. Place a plate over the top and (carefully—don’t burn yourself here) flip over. A few of your apple slices might stick—mine did. Boo! But don’t fret because you can still just carefully remove them from the pan and place them back into place. No biggie. 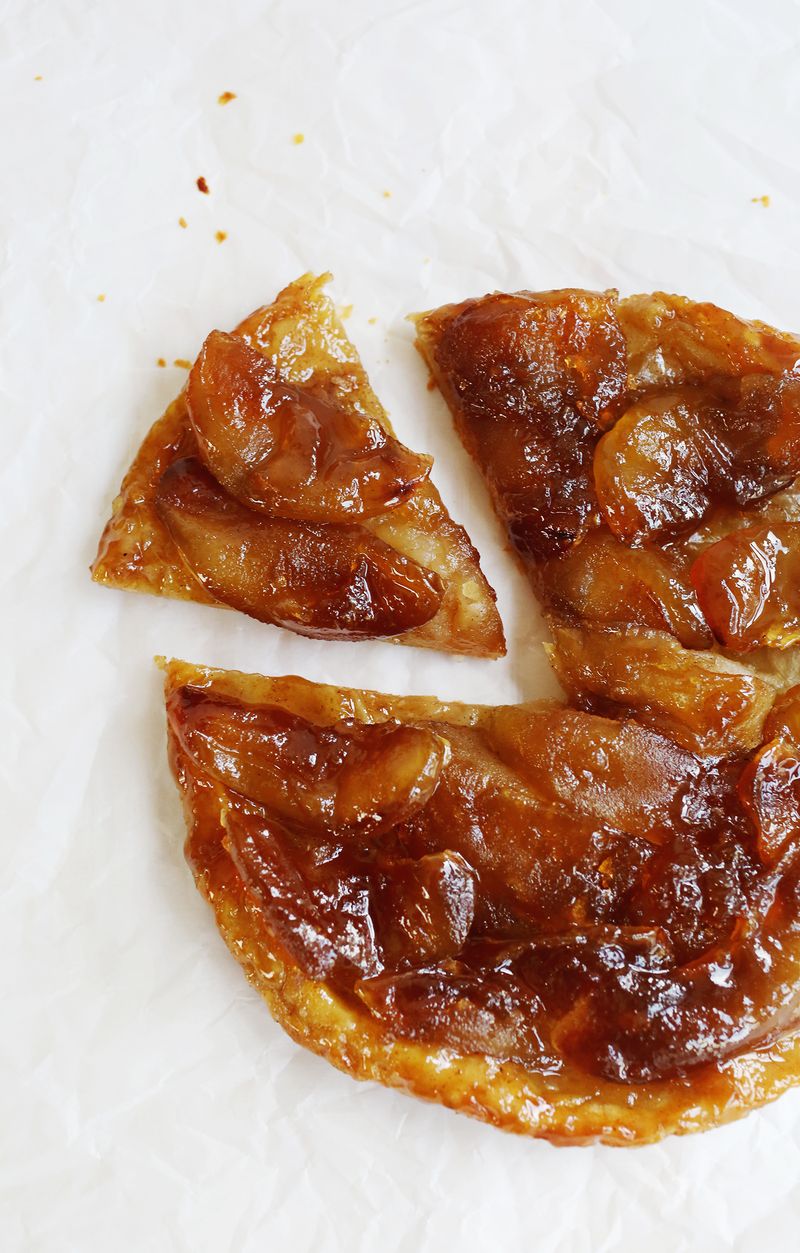 Serve warm with ice cream or maybe a little whipped cream. Or you can serve it without any additions, it’s plenty sweet as is. 🙂 So glad I decided to finally make one of these—thanks for letting me share. xo. Emma