DIY Family Board Book For Kids 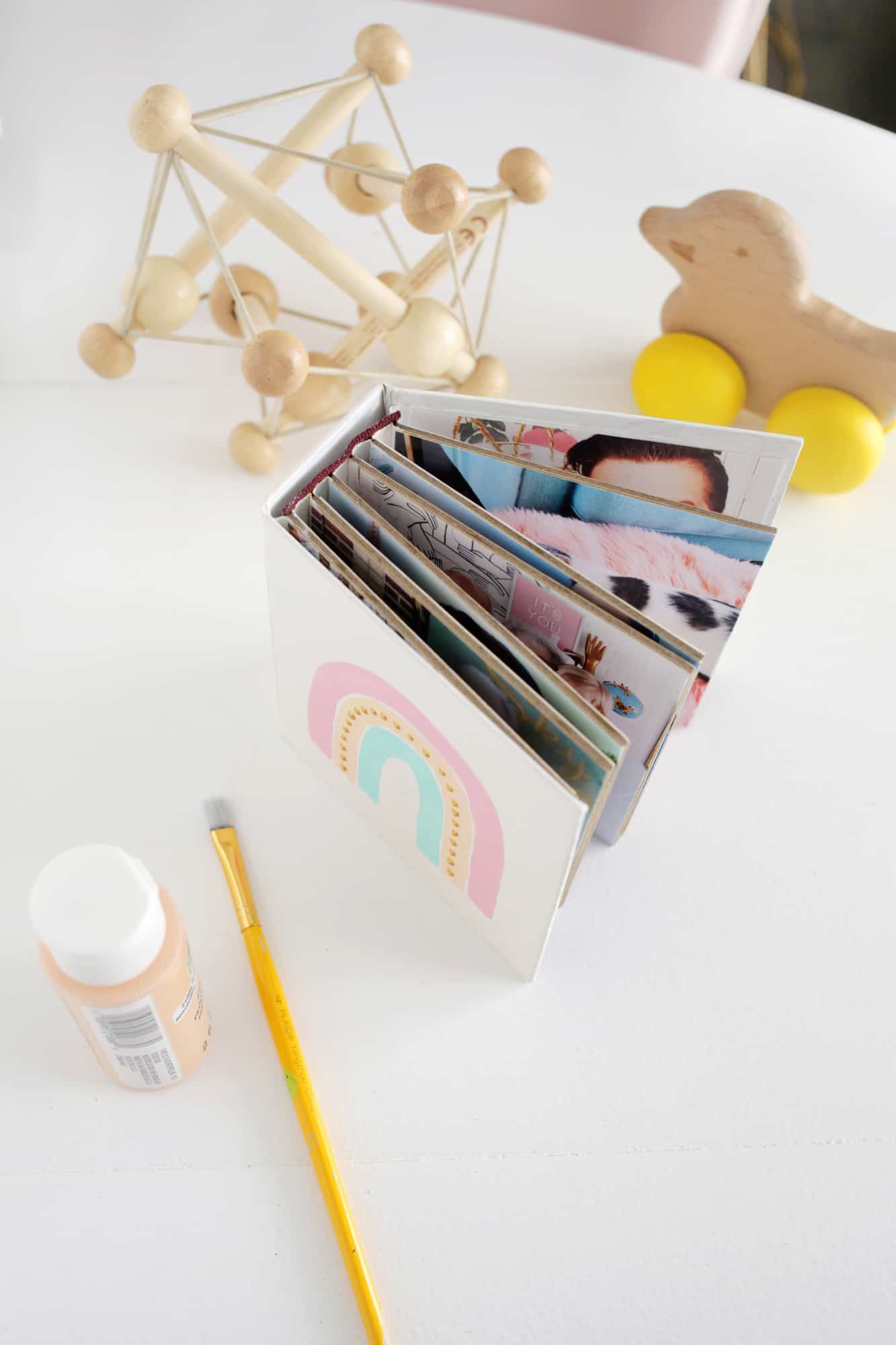 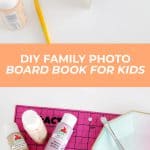 If you have a toddler, one of the things you probably noticed as they crawled out of babyhood was their sudden ability to recognize people in photos. We have some larger photos that go down our hallway, and all of the sudden, our daughter Lola was saying “Da-da” and pointing at Todd in the photos every time we went from one side of the house to another. She was still at the age where we weren’t sure if she was fully recognizing her grandparents when they would come to visit, but she found a small photo album I had made this past fall and kept saying “Min-eh-mah” (i.e. Nana) and “Pops” when she came across the photo of my parents in there.

We have several scrapbook-type albums on our bookcase of past December Daily photo challenges and since she has been recognizing faces I decided to show them to her.  Lola constantly points to them and asks to see photos of the family. Since she’s so into pointing people out in photos, I partnered with Canon USA to make her a little board book with pictures of our extended families, so she can point them out whenever she likes and also so she can remember faces that she may only see a couple of times a year. I also included photos of herself and our cats since she loves to point out those faces as well! 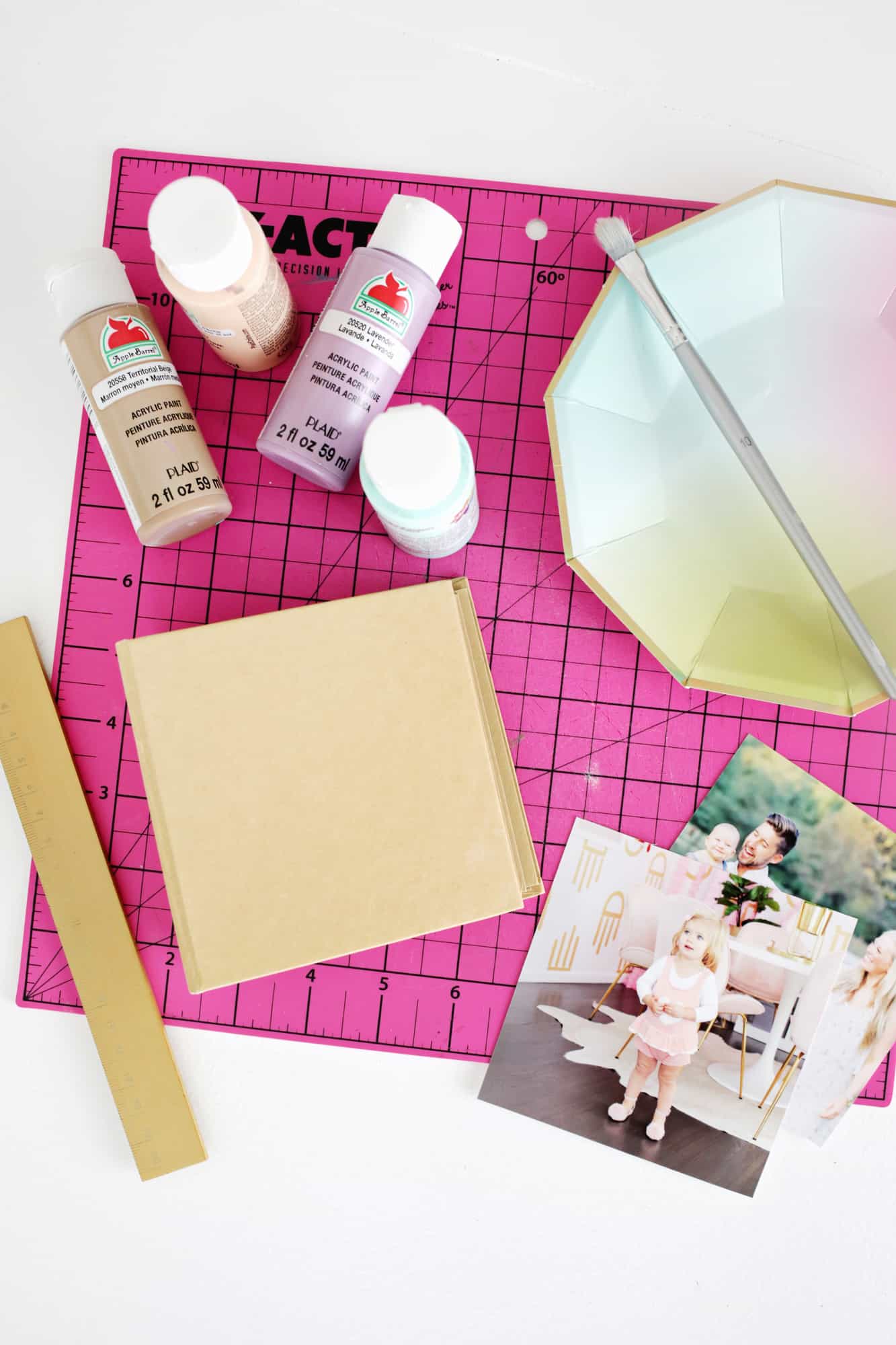 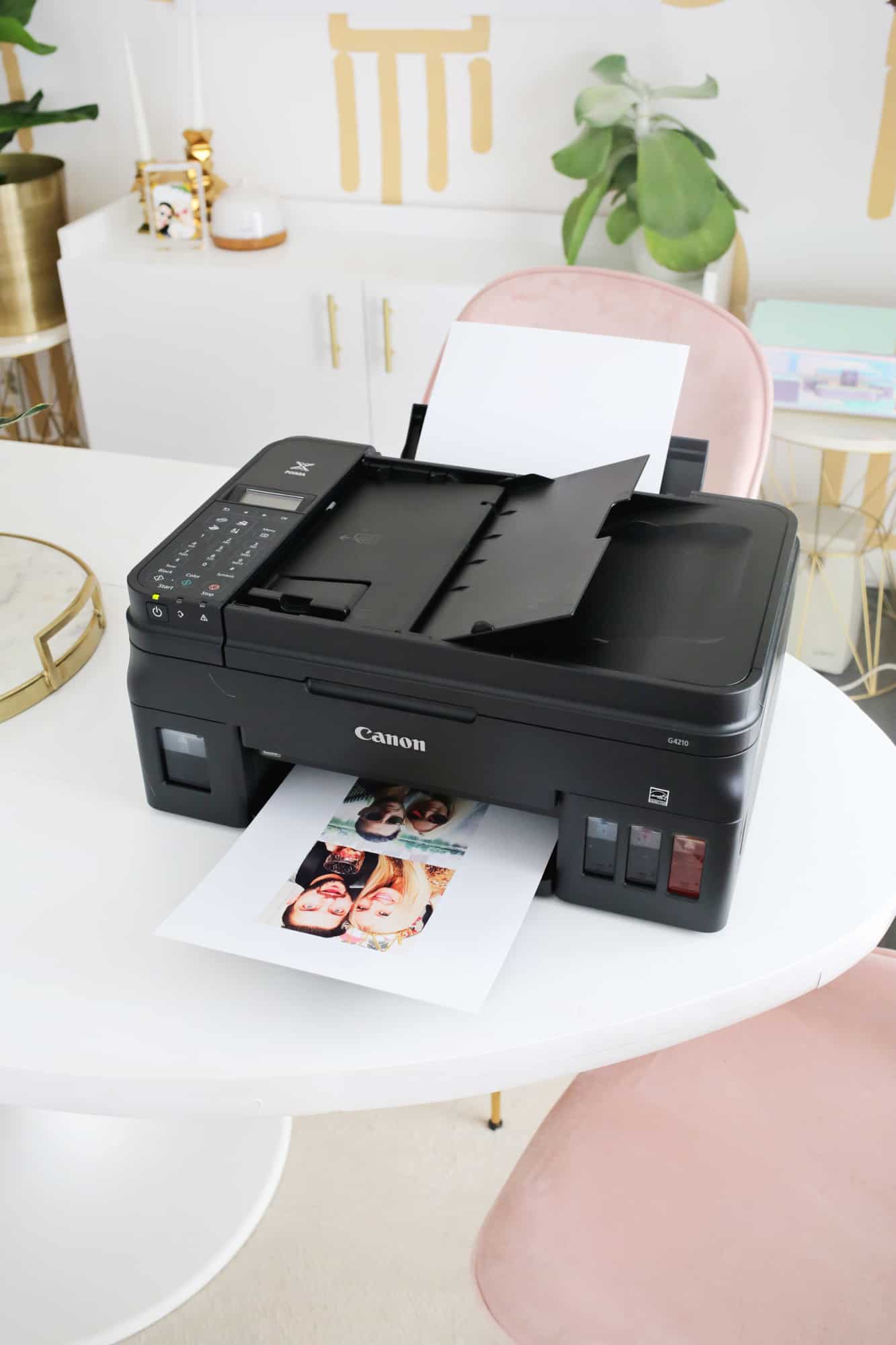 Start by gathering the photos you want to use for your book. I used Photoshop to resize them all into squares that were a little larger than 4″ square for my book and then printed them onto 8.5×11 pages. I just got the new Canon PIXMA MegaTank printer and was super excited to start using it on this project. I love being able to print my photos at home and one of my favorite things is that it has a huge supply of ink, meaning you don’t have to order it as frequently. 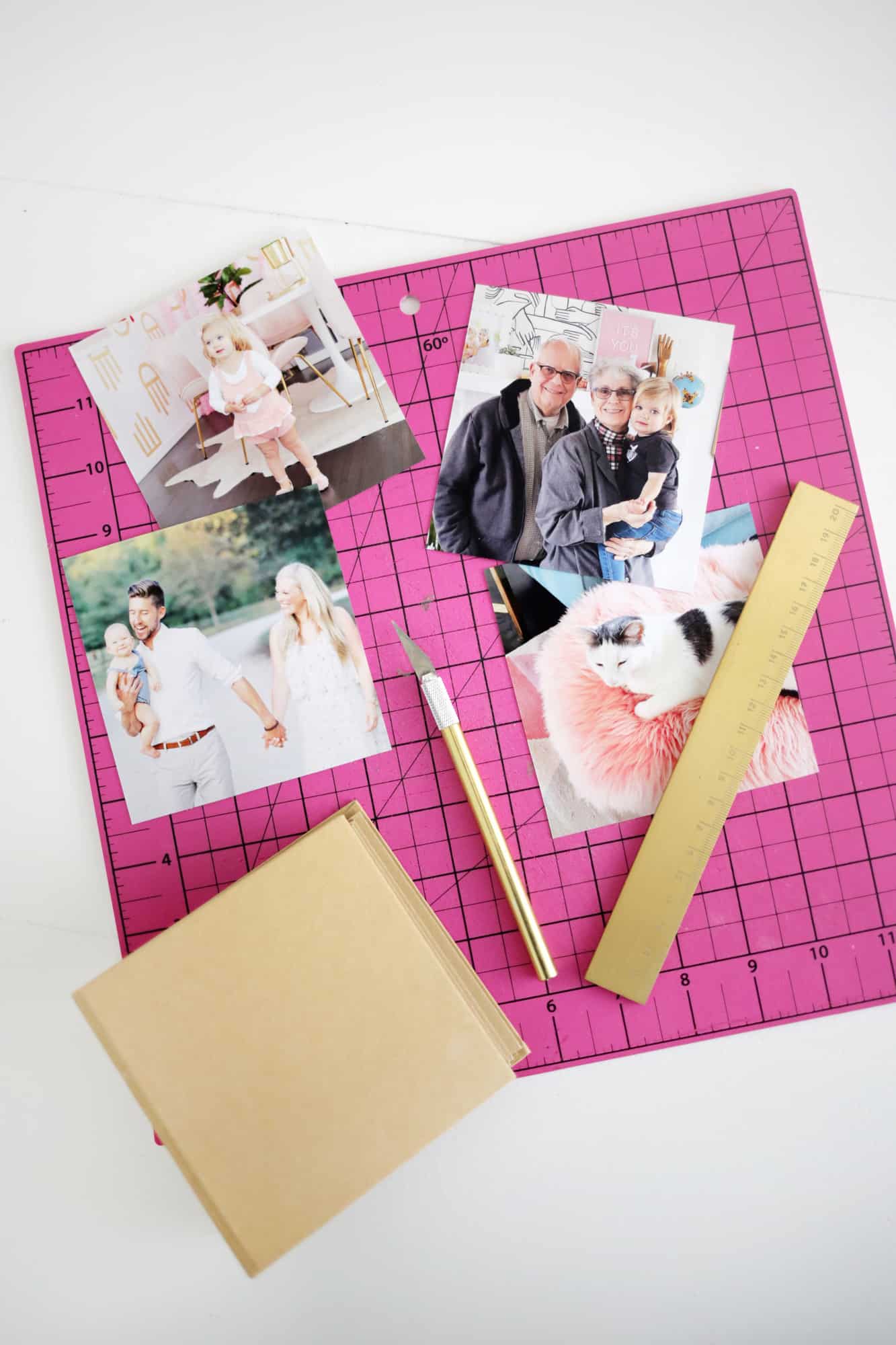 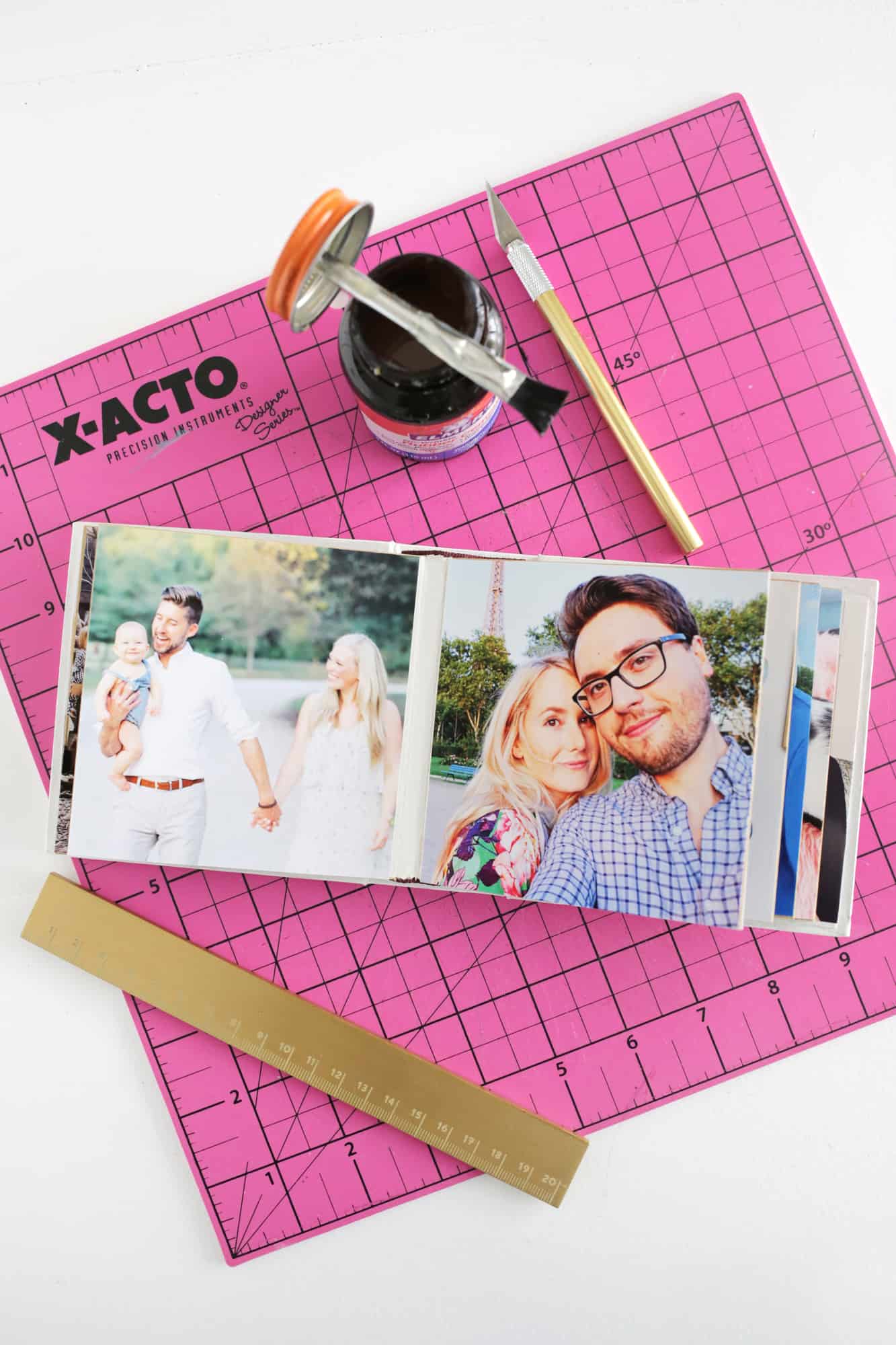 Once all the photos were printed, I cut them out with an X-Acto knife and used my rubber cement to adhere them to the cardstock. A little rubber cement trick is that if you want a stronger bond, you should do a thin layer of glue on the back of the photo as well as the page it’s going on and then let the sides dry before sticking them together. If your kid is an early reader, once all your photos are in place, you can add labels or write on the photos who is who so they can also see a name next to the photo. 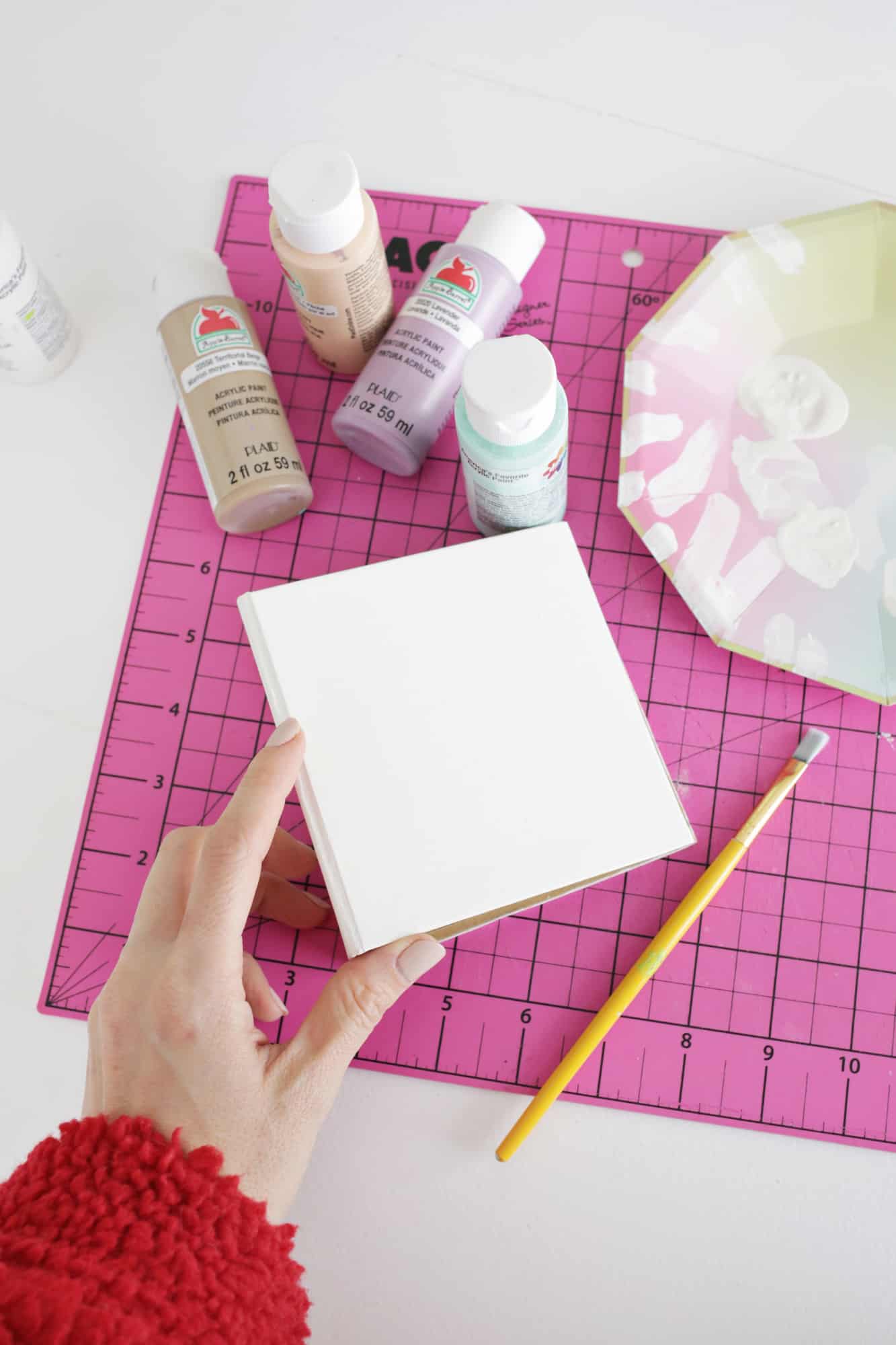 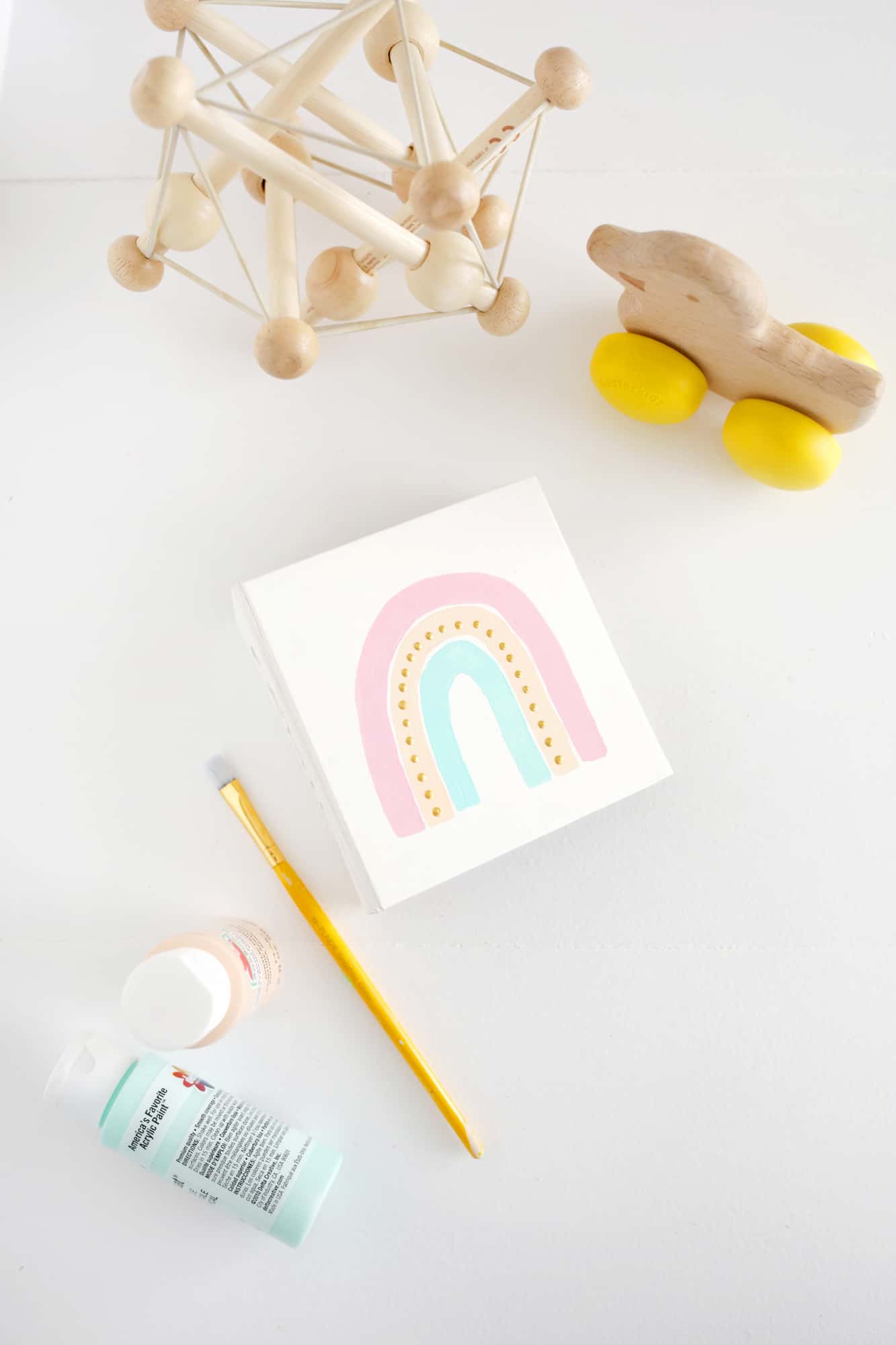 Decorate the outside of your album to your liking and your book is ready to use!

Normally, I would love to use some stickers on the outside of a book like this, but Lola loves to pull off stickers whenever she gets the chance, so I thought a painted or stamped design would be best. 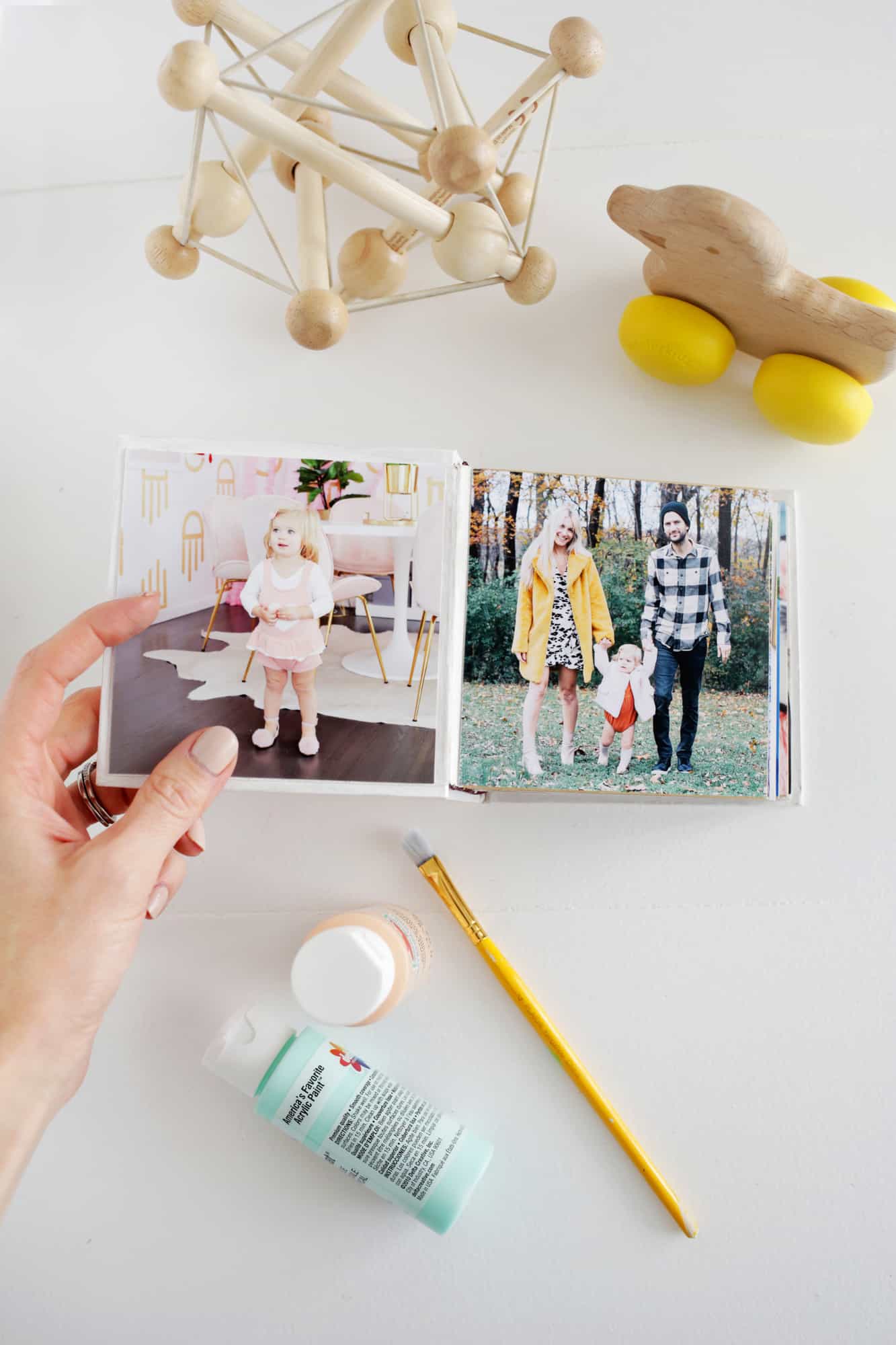 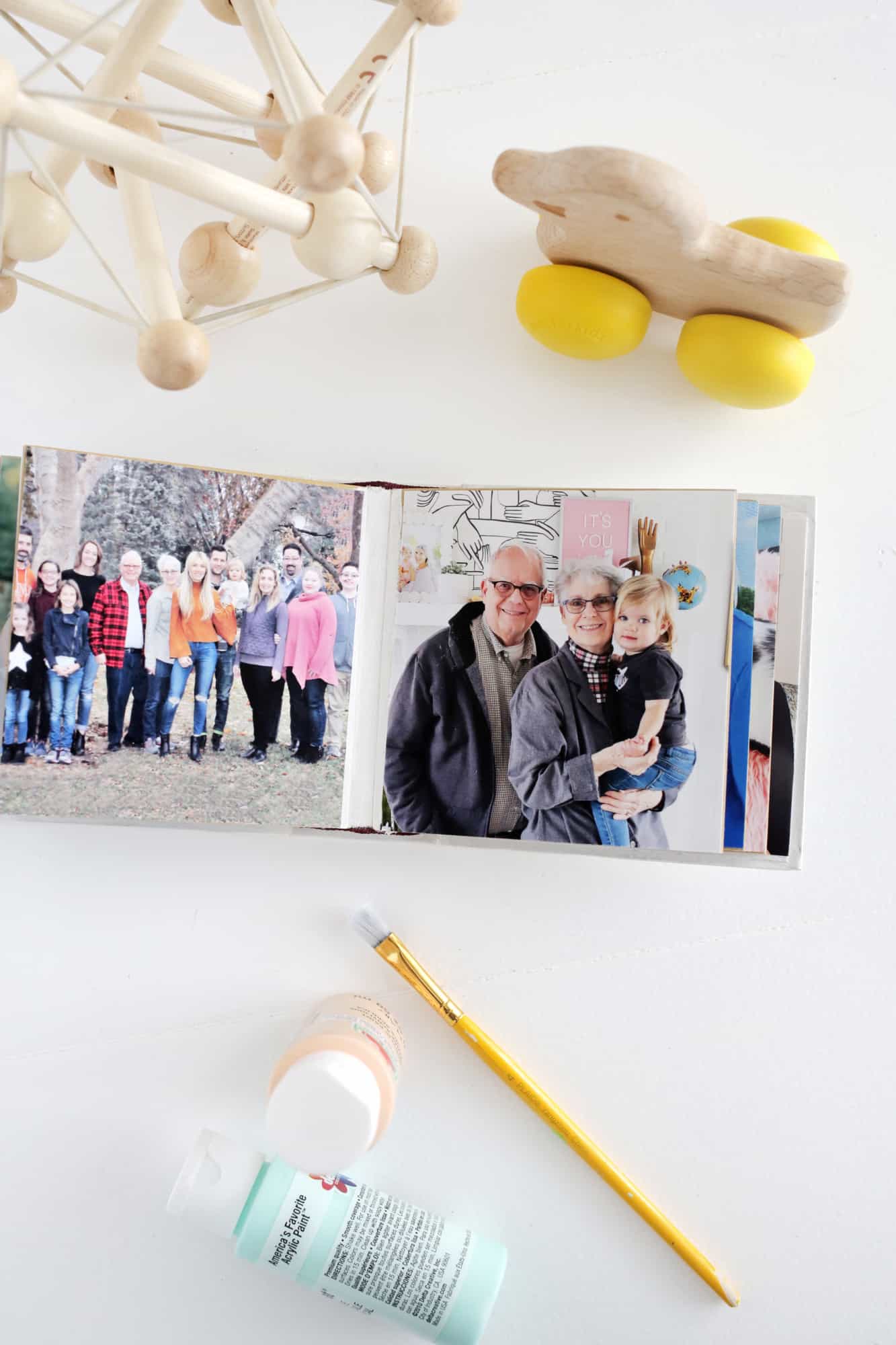 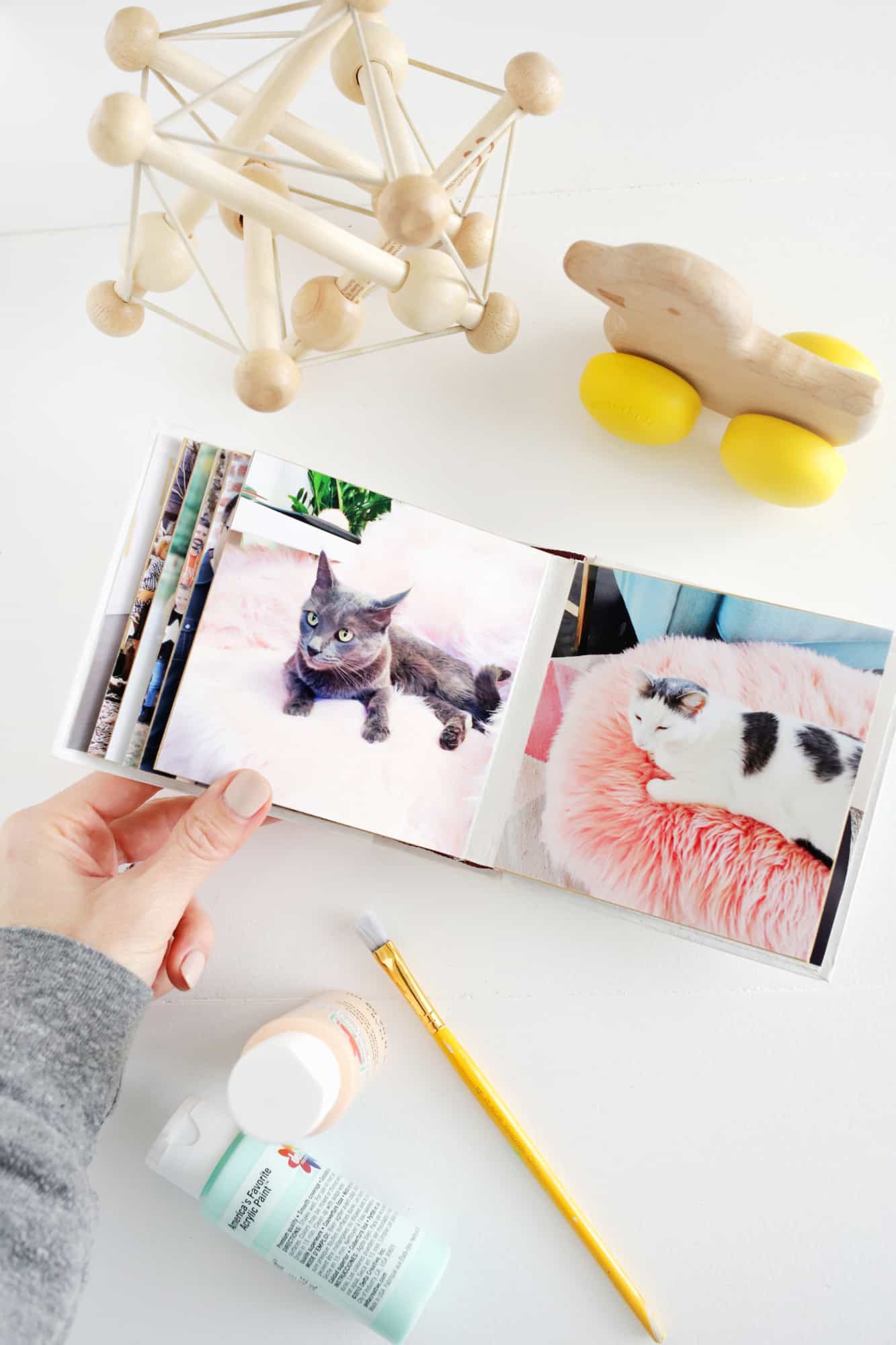 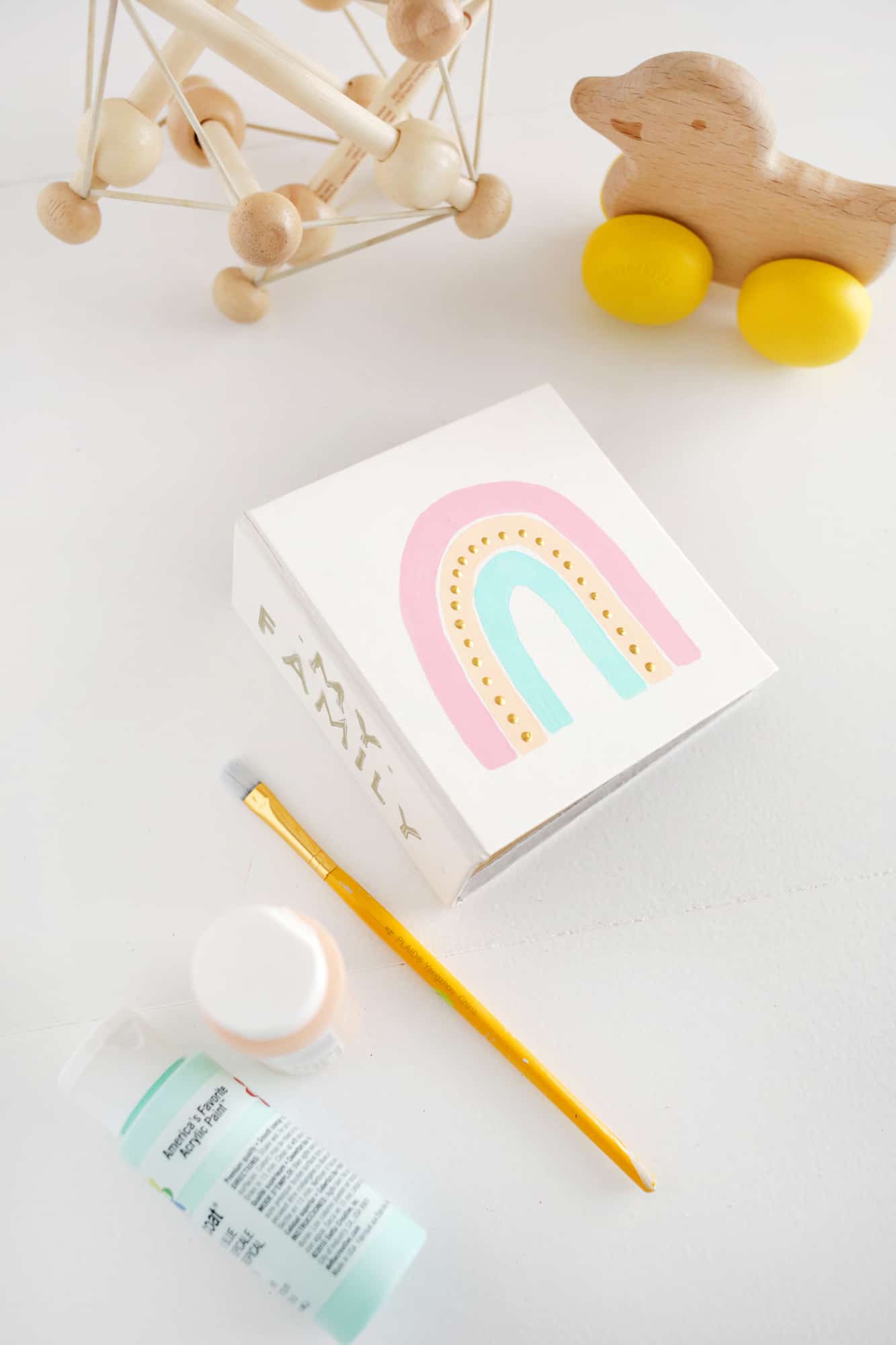 If you want to leave this book alone with a toddler, make sure they are past the age of putting items in their mouth as these are not food-safe components. But I think it would be fine to show it to a younger baby as long as you are there with them to discourage any book tastings. So far, Lola LOVES this book and I’ve even found it in her bed in the morning, which means she was looking at it for a bit before letting us know she was awake. She’s even been carrying it around the house at times! If your little one loves looking at family photos too, this is a great way to have your family around the house at all times, even if you live far apart from family members or special friends you love. Three cheers for family! xo. Laura

This is such a cute idea! I love it! Thank you so much for sharing.

love this idea, thanks for sharing!!

Thta’s really cool Thanks for quick update about diy family board book.

Thta’s really cool Thanks for quick update about diy family board book.

I love those handcraft thing. . How can I get one. I really love those.

This is so cute! It would make the perfect gift for family members. Love it! Thanks so much for sharing. Hope you are having a lovely day.

How cute! Love that she carries it around and “reads” it in bed in the mornings.

This reminded me of a photo album I made when I went on an exchange year in high school. We were encouraged to create an album of our life basically so we can share with our new family and friends, cats and all of course! I think I still have it together to this day 🙂

Oh, this is so cute! I love it. I once tried to make something similar but gave up halfway through. Maybe I should pick it back up and continue it! Haha! 🙂