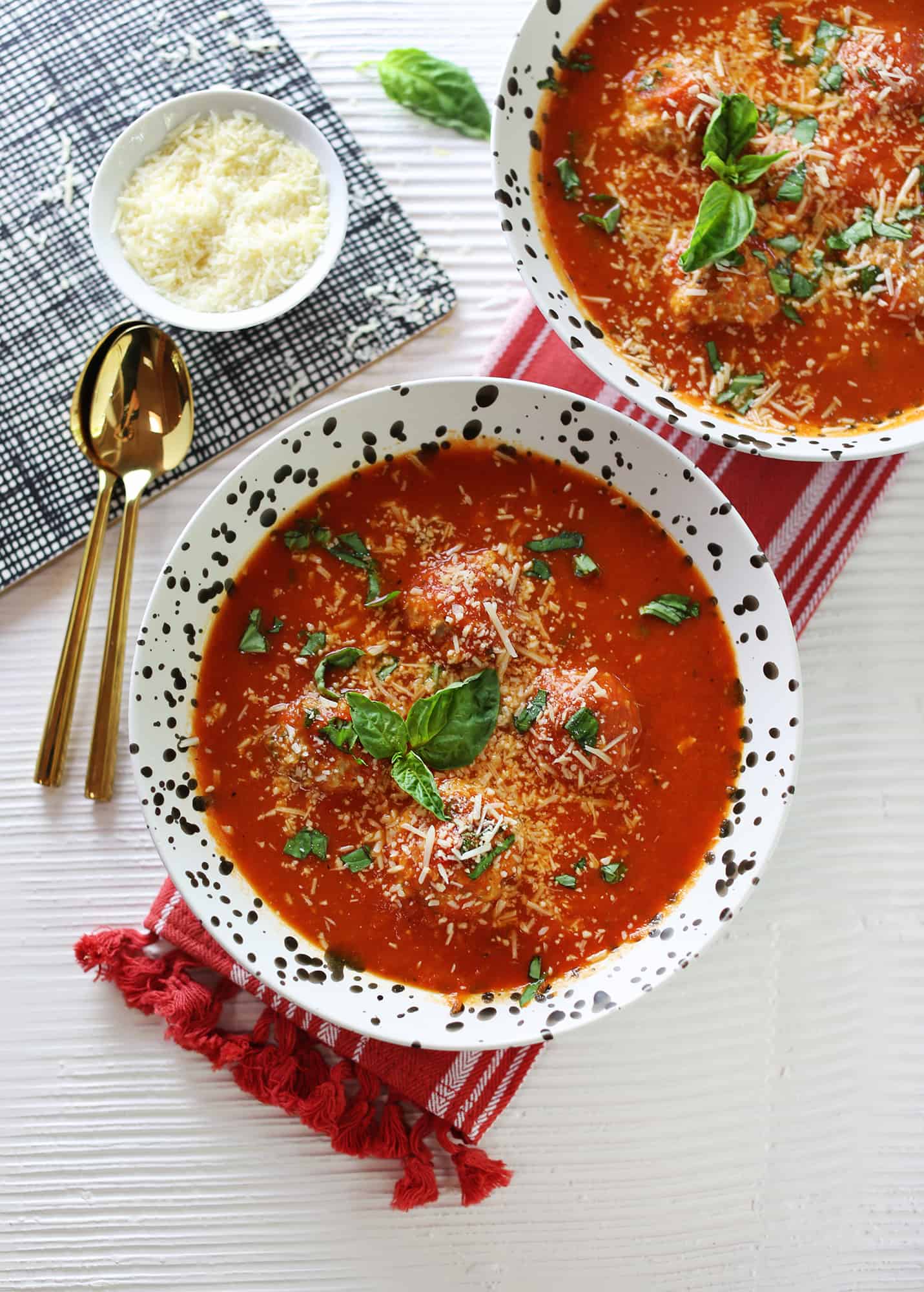 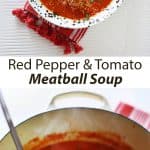 Happy soup season, everyone! While I certainly eat soup all year long, there is something extra special about a big bowl of comforting soup on a chilly autumn day. Plus, I work from home so having 3+ servings of soups in my refrigerator at the beginning of the week means I’m having a quick, easy, and super delicious lunch break most days that whole week. It’s magic.

And this red pepper and tomato meatball soup certainly checks a lot of boxes for me. First off, I’ll pretty much try any soup with the word tomato in it. Just me? This is also a super filling soup that’s pretty darn low in carbs, in case you’re trying Keto or something. 🙂

As many of you know, I am not a big meat eater. I just don’t really eat a lot of meat and when I do it’s usually fish/seafood. That being said, I must admit that I do love meatballs. Ha. And the meatballs I make for this soup are really good. But if you don’t want or don’t eat meat, you could absolutely replace them with these vegetarian meatballs and still get basically the same red pepper and tomato meatball soup out of the deal. 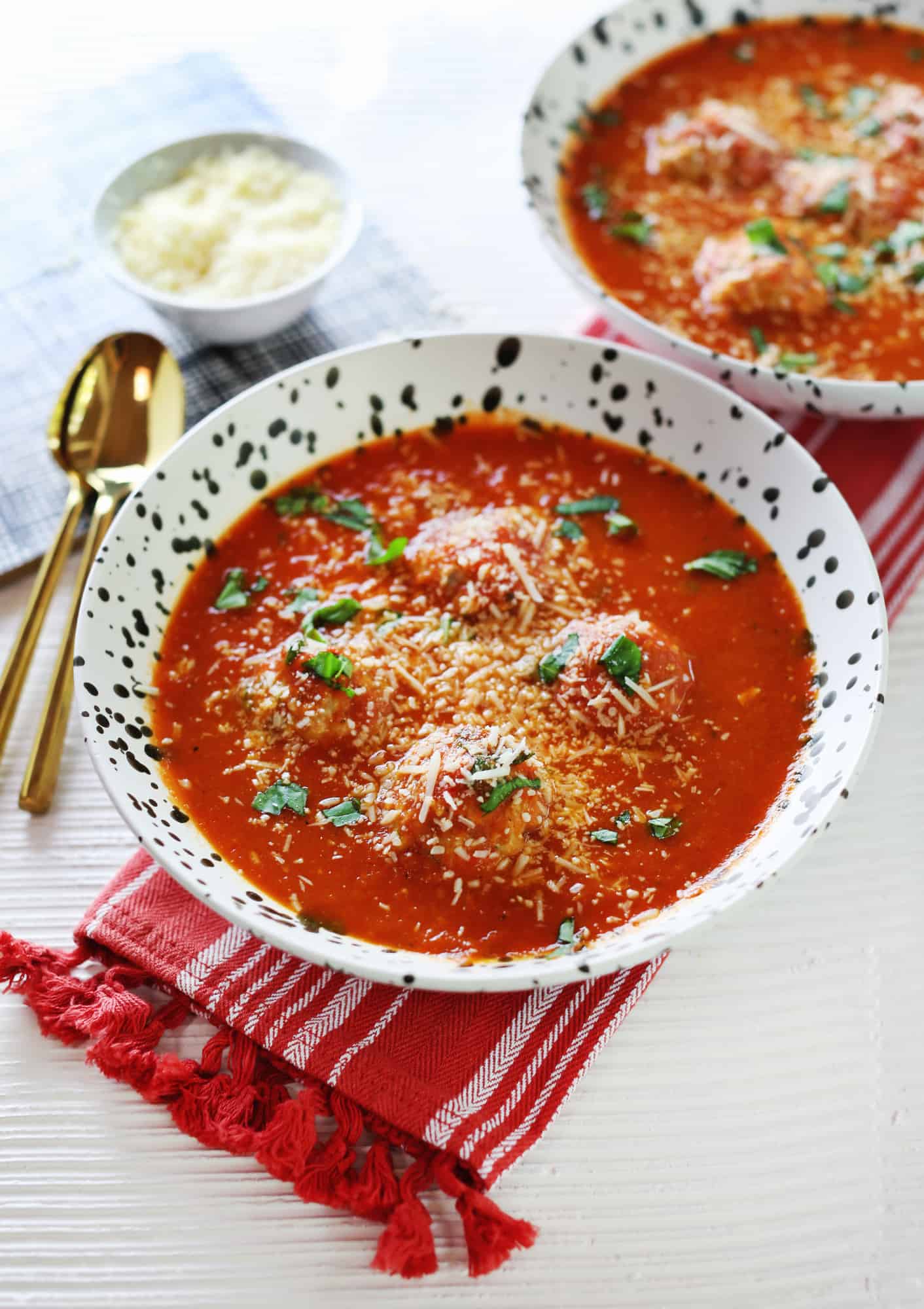 You can find all the recipe details in the recipe card at the end of this post (it’s printer-friendly too), but I also want to mention a few things that I do that although not necessary do make the meal prep of this soup even easier.

First off, you could absolutely make your own roasted red peppers and even stewed tomatoes, but I just use the can/jar versions from the store. Second, I make the meatballs the night before I plan to make this soup. Or I do it on a Sunday if I’m meal prepping multiple things for the week.

You could also assemble the meatballs (not baked yet) on a baking sheet, cover well, and refrigerate for up to a day before baking.

You could also make these meatballs (full cook them, not just assemble) and freeze. Then you could use them whenever. 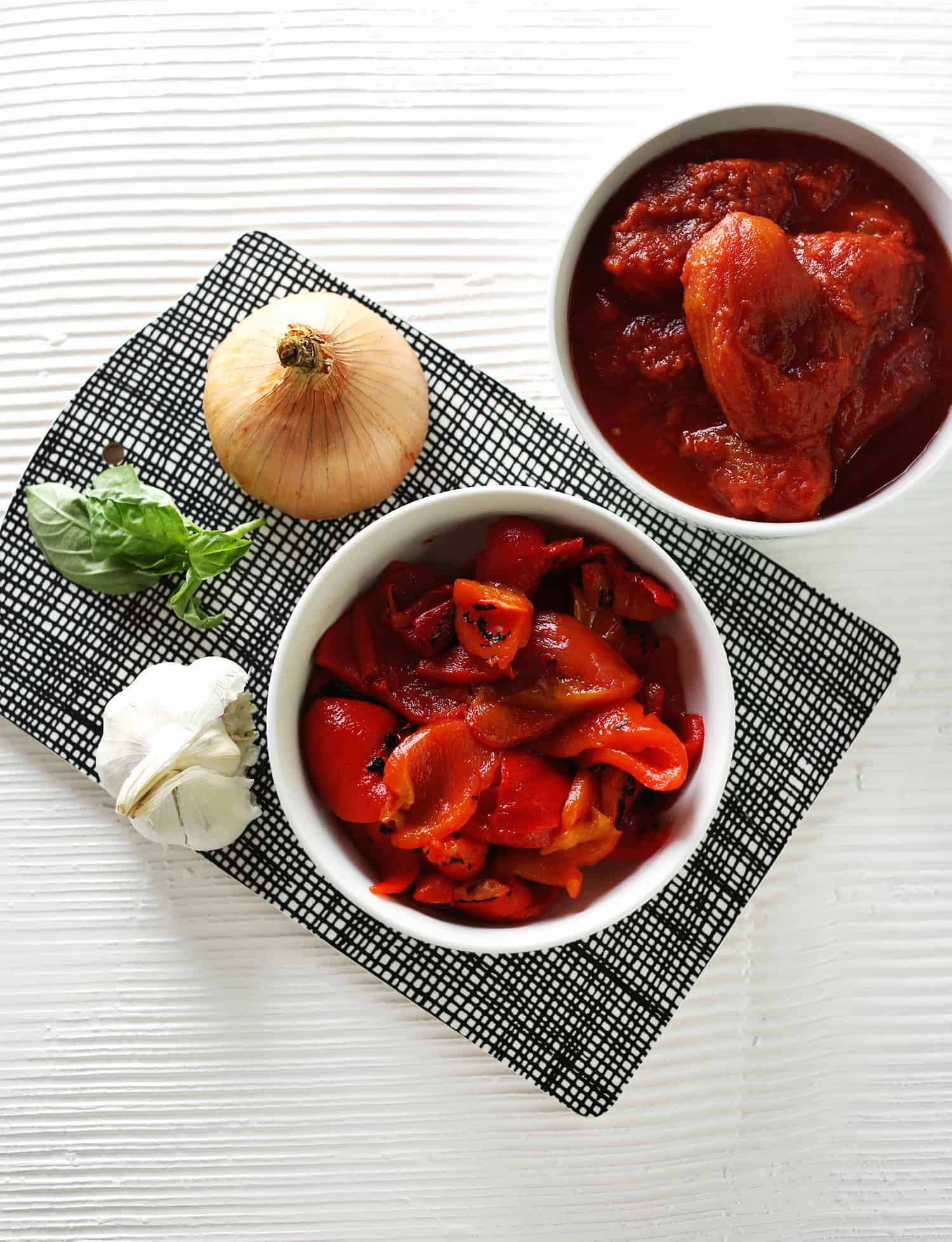 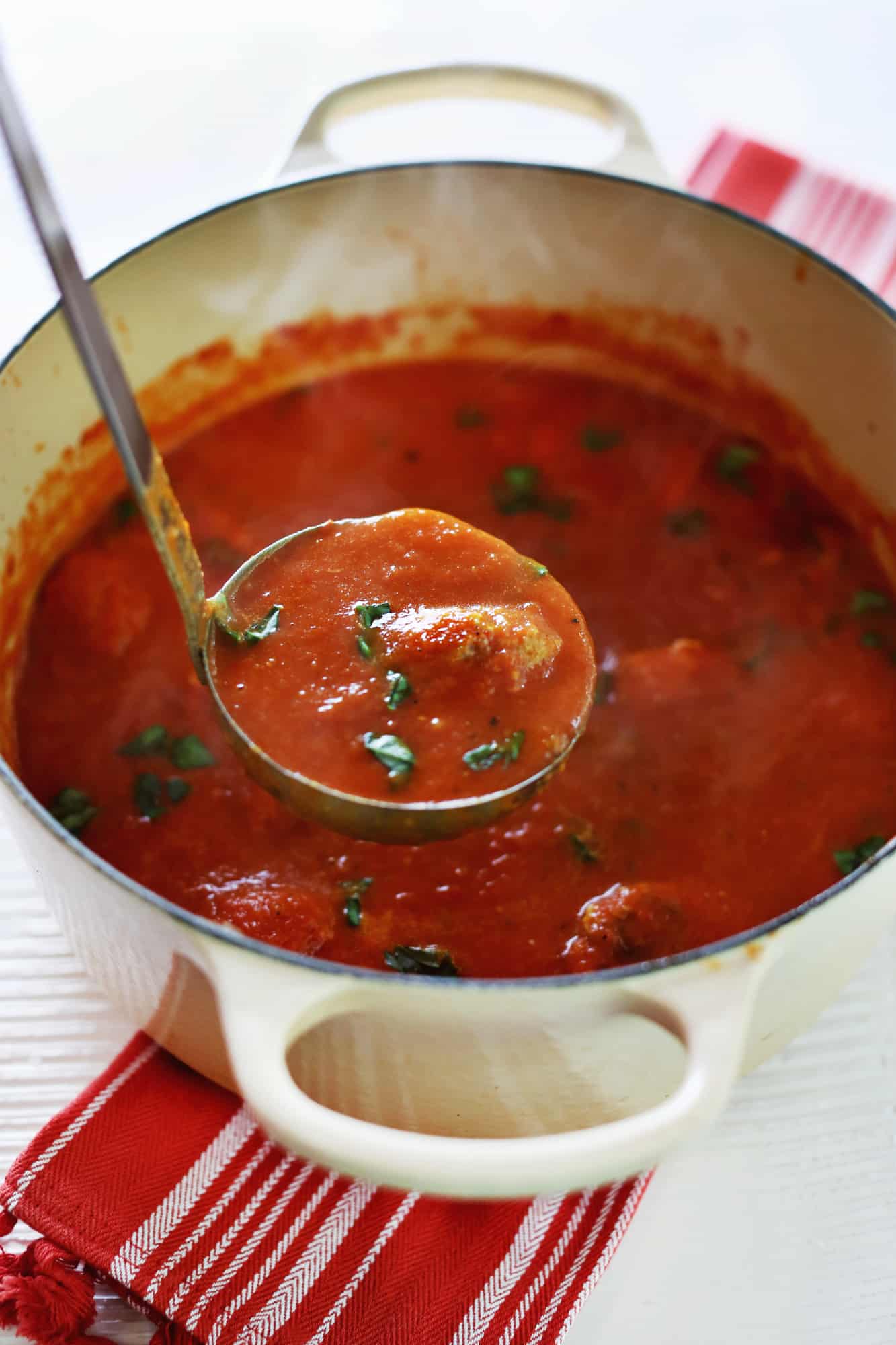 Also here’s my process for pretty much any soup or chili I’m making. I make a large batch (sometimes doubling a recipe, but for this red pepper and tomato meatball soup it’s big enough for us as is) and have that for dinner with my husband one night.

Then I save the remaining servings, which is often 3-4, in these glass bowls and keep them in the refrigerator. That becomes quick lunches or dinners for me the rest of the week. Boom!

If you have a larger family than me, you may want to adjust this plan as it works for you. But I love making a meal that is actually making like 3-5 meals all at once. It’s seriously some timesaving magic. It also encourages me to eat a bit healthier all week (which is a big part of meal prepping, so no duh, I guess). 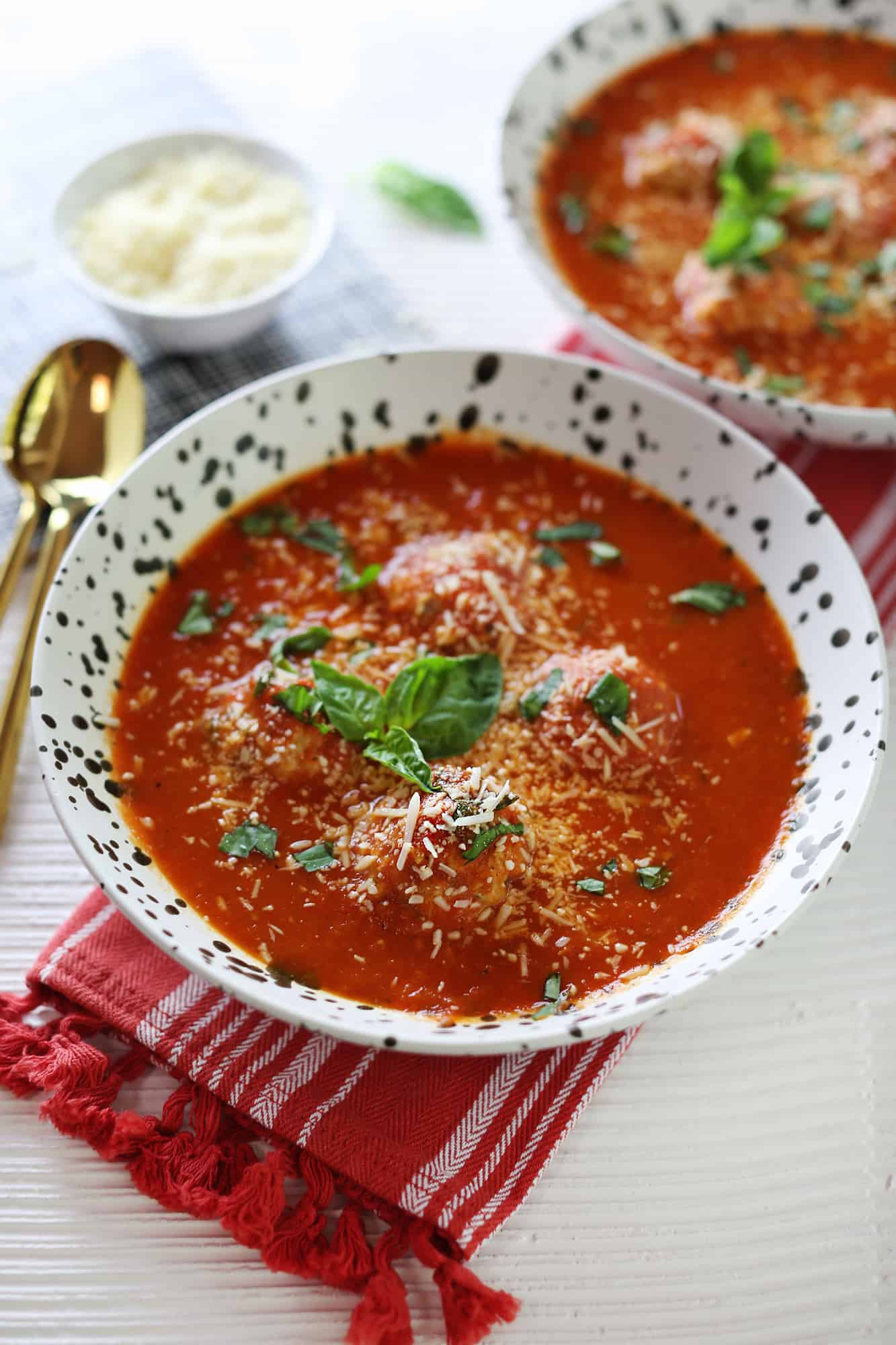 I seriously love this red pepper and tomato meatball soup—it’s like eating spaghetti and meatballs but way less carbs. Yum! But here are a few other soups you should try: Creamy Cauliflower and Leek soup, Spicy Peanut and Wild Rice soup, White Bean, Dill and Vegetable soup, and Gnocchi and Vegetable soup.

I’m also really excited to make this chili and pair it with Fritos. Ha. It’s like literally written on my autumn bucket list. 🙂

What are your favorite soups or chilis to make this season? xo. Emma

END_OF_DOCUMENT_TOKEN_TO_BE_REPLACED

Notes: For the herbs in the meatballs, you can use any combination of fresh herbs you like, or whatever you might have on hand. I like cilantro, parsley, thyme, and rosemary best. I would probably avoid mint but ... never tried it so I guess I shouldn't knock it. Just doesn't sound that appetizing to me. Also you can replace the 3/4 cup almond flour with 1/2 cup bread crumbs if you're not concerned about carbs. This is just how I make meatballs when I'm watching my carbs (like doing Keto), but it's not necessary if that doesn't matter to you.
Course Main Course
Cuisine American
Keywords meatballs, red pepper soup, soup

Would it work to cook the meatballs directly in the soup?

It wouldn’t be hot enough to fully cook them— I would make them before just to be safe!

Tomato soups are my favorites and with meatballs. I have to try this soon!

love this dish, from someone who loves meatballs already, thank you

I love the bowls! Where are they from?

West Elm, last year. They might still be avail though. Great size for soup!

Wow! This looks like something I could eat once a week! I love cozy food and those peppers have to kick it up a notch!

Yum! looks delicious, i love pretty much any soup though!

This soup looks fantastic! I have “make lots of soup” on my autumn bucket list and this recipe is definitely going on my soup wishlist!

Wouww!
Today my husbond just asked me, if I could make a tomtosoup soon:-)
This I can now!!
Thank you!!

Sounds delicious! Do you think this would freeze well?

I think so. Although I must admit I haven’t tried it yet.

You could also very easily make and bake the meatballs and freeze those to make the process much faster. Plus the meatballs would be good in all sorts of things (other soups, on top of pasta, in sandwiches, on top of a baked potato, etc.)

Delicious! The turkey meatball was still alittle soggh to form meatballs so I added physllum just a little bit too much. I almost feel like a grilled cheese would go with this too ha but as it’s I’m impressed it’s delicious. Thank you for the recipe.

I love soup and this one looks amazing!! I’m definitely giving it a try.

This looks and sounds delicious – I think I might have to add it to my menu for the next couple of weeks!

Cathy, your Poor Little It Girl