Tips for a Shared Kids’ Room 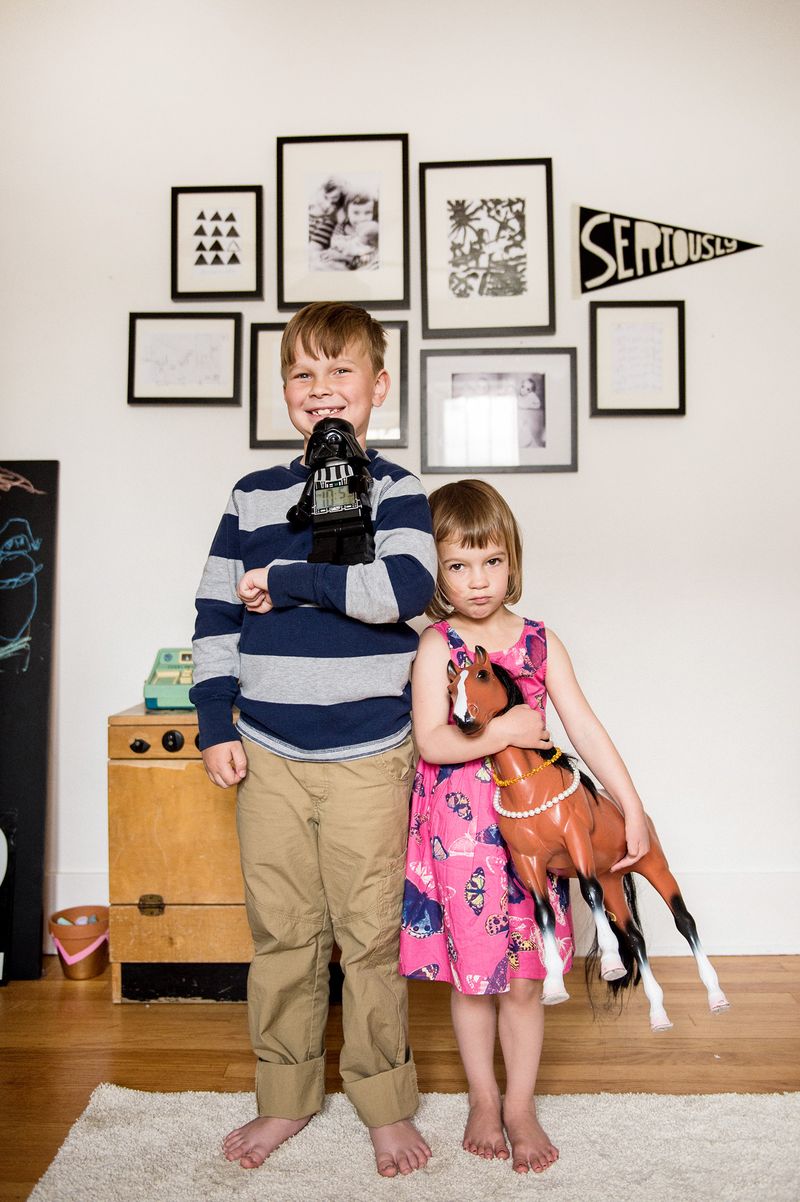 Our oldest son has had to share his room with his little sister ever since she arrived on the scene almost five years and two houses ago. We have had a few different furniture arrangements between cribs, twin beds, and now a bunkbed as their needs and room sizes have changed. We have also switched their room decor from vintage-inspired to something more modern, but have always managed to make it a fun space that reflects each of their personalities whilst feeling as cohesive as possible.

It’s a little tricky making one space work for both a boy and a girl, but I love a good design challenge. Below I’ve shared a few things I’ve learned along the way. 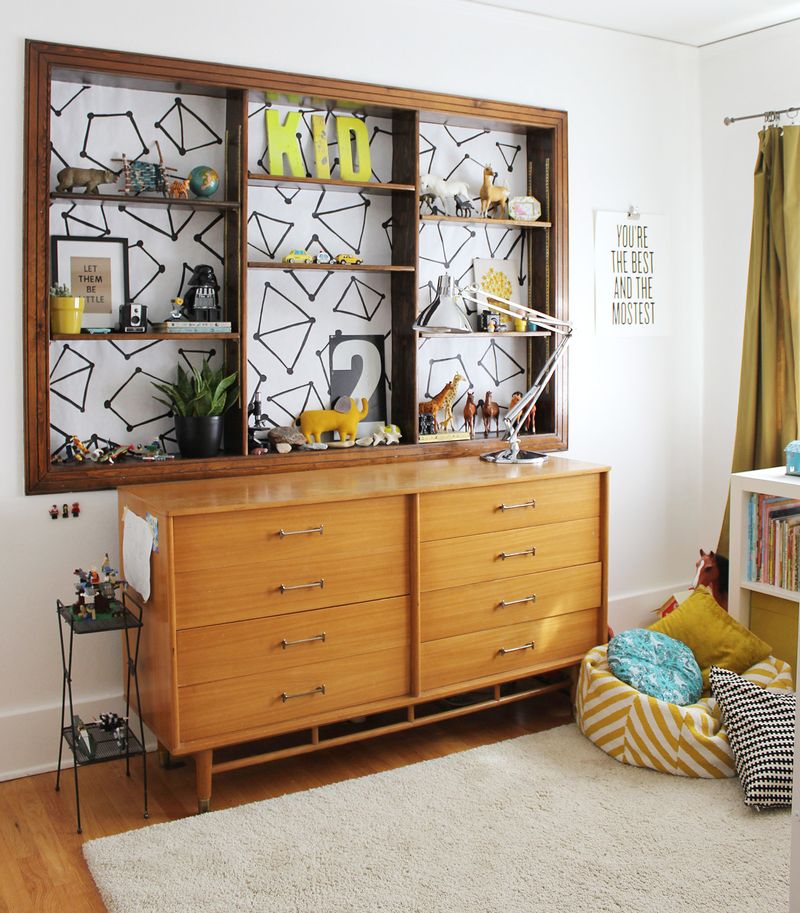 1. Design with each of them in mind.

I’ve already shared how I won my battle with the dark built-ins in a tutorial here. I wanted to use this space as a way to display their stuff without it turning into an eyesore. One of the ways I was able to keep it both interesting and gender neutral was by using pattern and color instead of relying on a theme.

I repeated the same geometric-style theme and colors elsewhere in the room in strong amounts but left the rest in smaller doses. You’ll notice a lot of black, white, and yellow tones. However, Ruby’s handmade quilt also has plenty of pink, red, aqua, and green in it. I also chose to display items that belonged to each of them that fit within the black, white, and yellowish color scheme. Sebastian’s black Darth Vader clock is displayed alongside Ruby’s yellow stuffed elephant. Decorating with belongings within your chosen color palette allows the room to be both personal and cohesive. 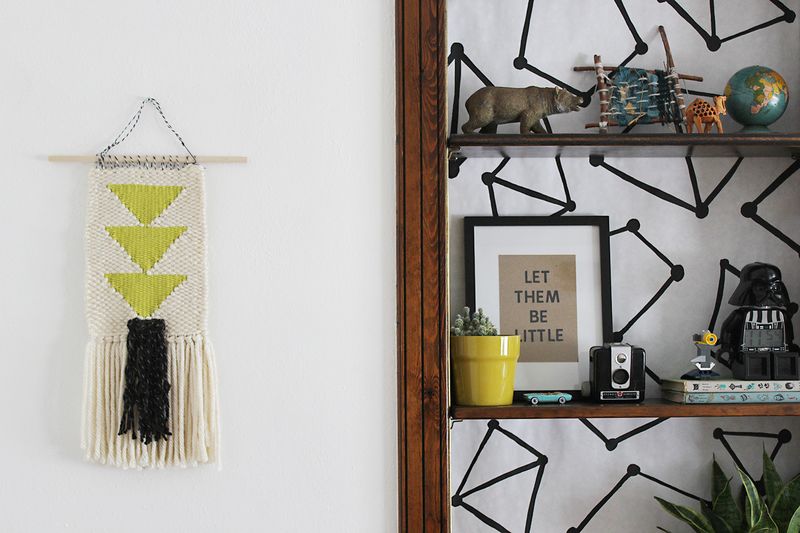 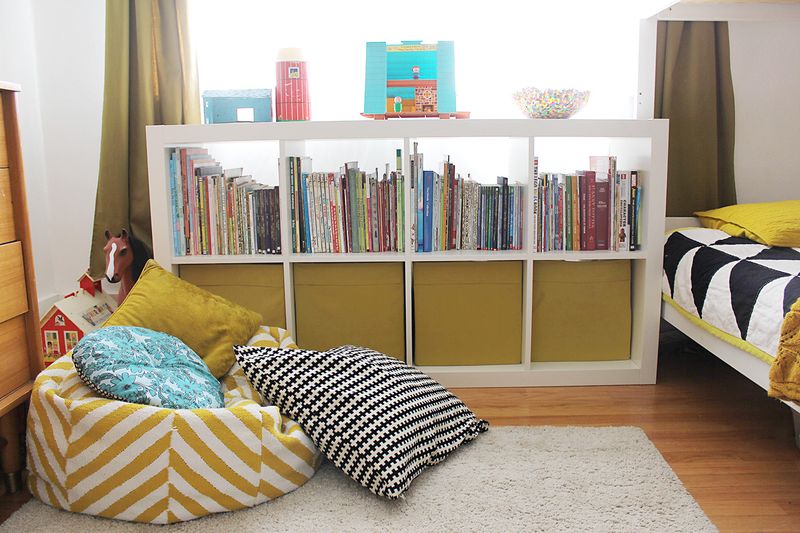 The loud and proud pink princess accessories are contained in the coordinating yellow bins in the bookshelf, and Sebastian’s primary color lego pieces are neatly stashed in clear plastic tubs hidden under the bottom bunk. Stuffed animals live in a large coiled basket and larger toys are stashed in their shared closet. Their possessions each have a home where they can be easily accessed and that look lovely when their room is picked up. I can make no promises for an aesthetically pleasing space halfway through a play date though. 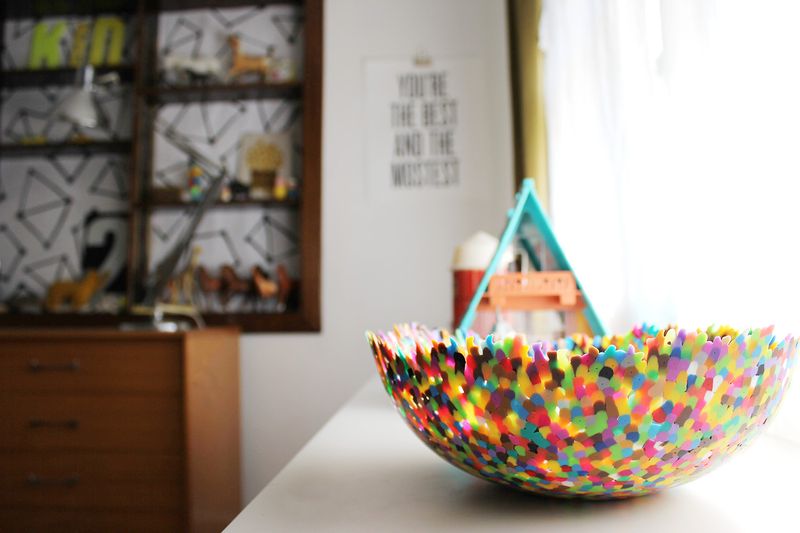 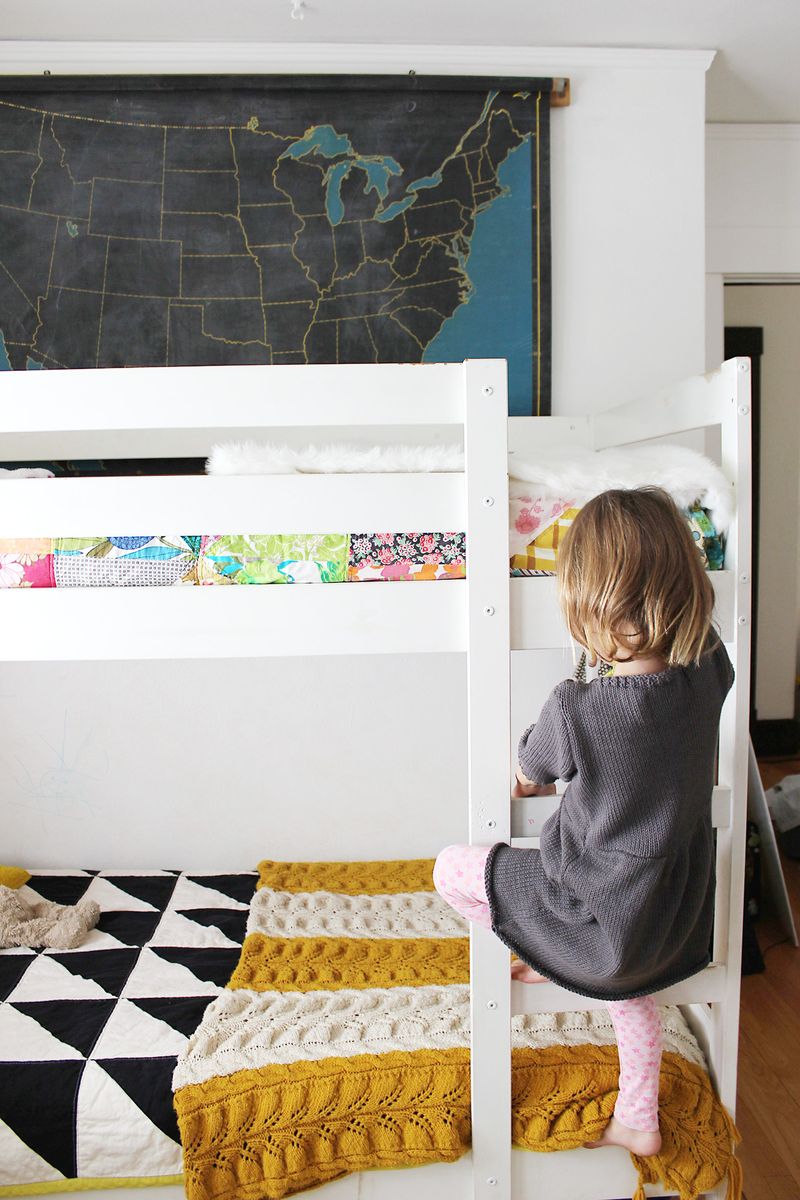 3. Give them their own special spaces.

Ruby spends a lot more time in their shared room because Sebastian’s in school, so it’s usually just her stuff spread all over the floor at the end of the day. I knew Sebastian needed a place to put his lego creations once he was done building them with the peace of mind that his little sister wouldn’t break them apart during a feisty round of pet shop.

I moved all of the out-of-season linens and board games out of the built-ins in their closet and stored them elsewhere so that Sebastian would have a place to display his many creations. It’s a little dark in there, so I also added a battery powered LED light from Ikea so he can see even with the door closed. He said it feels like a secret fort and loves knowing they won’t be smashed. Ruby and I love that we aren’t stepping on legos all day. 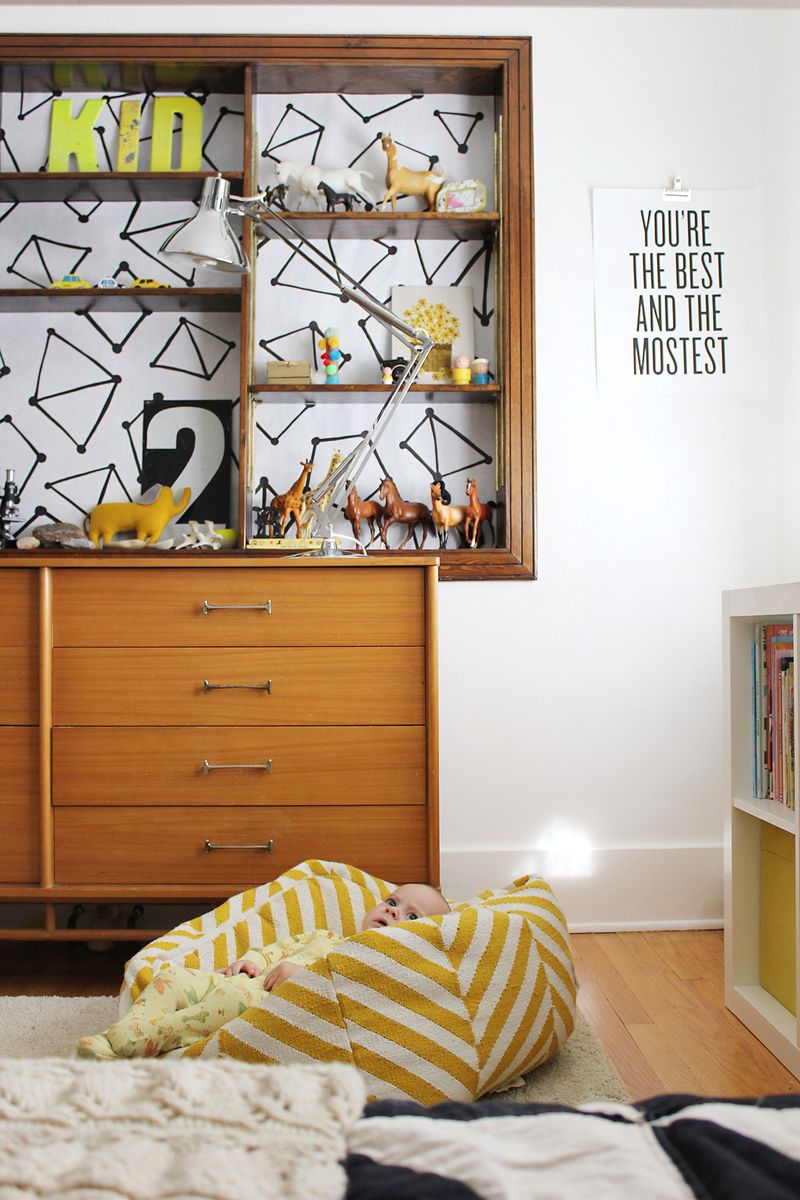 4. Utilize furniture that is multifunctional.

Put your stuff to work! Not only is the furniture in the kids’ room appropriate for their age, it’ll still be useful a few years down the road barring it’s still in good condition. The shared dresser used to belong in our bedroom but is now split between the two kids. The Ikea shelving unit holds toys and books but might also one day hold Sebastian’s budding record collection. The bean bag is an easy spot to lay a squirmy baby but also useful for when the kids have friends over. The coiled basket full of stuffed animals will someday hold all of their dirty laundry. The bunk bed will be used in one of their own rooms purely for sleepovers when they no longer share a space.

The point is, that having multifunctional items will help save you money when you transition spaces. Think about what your kids’ needs are at the moment and what they will be in the next two years. They grow so quickly that sometimes it’s more practical to save a little on the items that won’t stick around long and splurge on those that will. 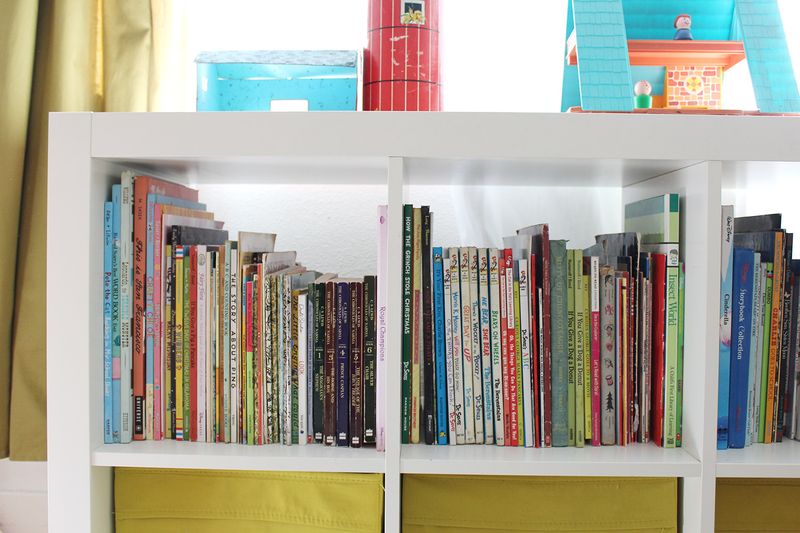 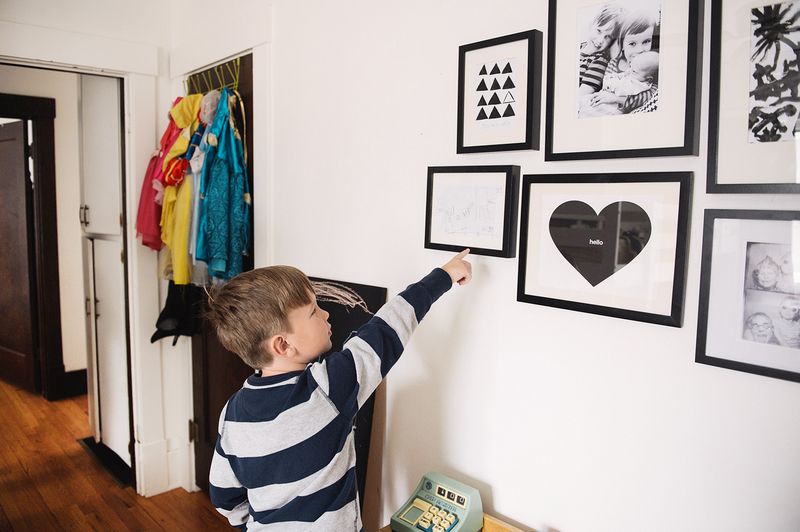 5. Involve them in customizing their room.

I like to give my kids controlled choices. I really wanted them to feel like they had a part in decorating their shared room without handing over the reigns completely. Part of this was to keep it from becoming a battle over how much Captain America was too much Captain America and whether or not it was fair to have a pink floral rug in an eight-year-old boy’s room.

For example, I asked them to create some art for the art wall but limited their color choices to black, yellow, or shades of blue so that whatever they created would be cohesive with the rest of the room’s design. Ruby made a fun abstract painting and Sebastian drew a battle scene of some Star Wars legos. I mixed those in with a photo of all three kids, enlarged a photobooth picture from a few years ago of the older two, and made a fun felt pennant utilizing one of Ruby’s favorite sayings. They love to show off their work to any company that come over, and I love that this was a joint(ish) effort. 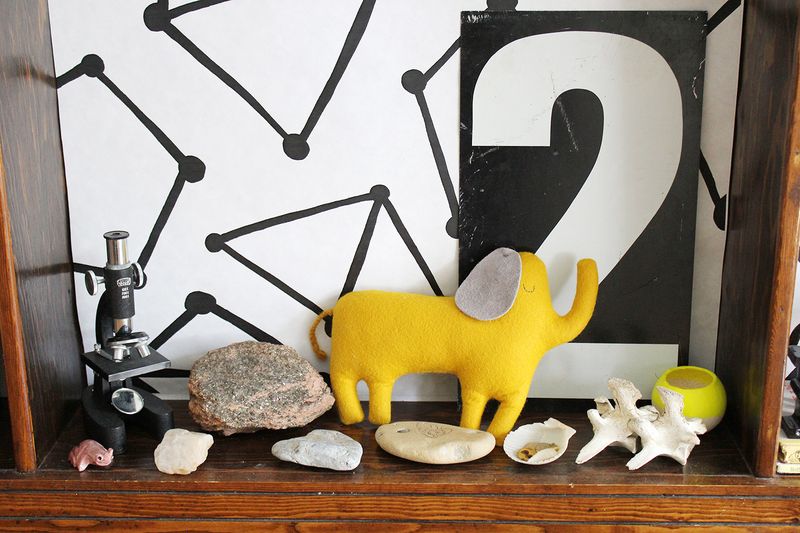 We’re actually moving soon to a house where Sebastian will get his own room and Ruby and Smith will eventually share once he’s moved out of our room, so I’ll be referring back to my own tips in a few weeks! What have you learned about decorating a shared room? –Rachel

I have never commented on one of these before (I think?) but why so much stress on making the room “gender neutral” instead of simply what they like? I hardly think that your son is going to explode if he touches something pink, and honestly, this would be a great lesson to teach your children to break those old fashioned boundaries.

Love this! Thanks for sharing the space. The space looks great, and I think you’ve hit a good compromise for the two kids’ styles. Sharing rooms is a part of life for so many of us.

Rachel….you are a complete GENIUS!!!
This is beautiful.

I love all of this decor! Such a great idea when boys and girls have to share a room! It all looks wonderful, and so personalized!
xo
Kristina
www.eccentricowl.com

I love this, and you can tell that your kids enjoy their space, being able to share but have individual areas as well. I like especially that, when all cleaned up, the room is designed as a neutral slate that could be colored in by my little pony parties or star wars battles depending on who’s playing. 🙂

This is a gorgeous room. I love the bookshelf and bunk bed, and the fact that they helped with the artwork.

It’s a beautiful room, but this really really doesn’t look like a kids’ room at all. The display wall just seems odd with the print “let them be little.” Does that even mean anything to them? It all seems more geared towards mom… Some really great tips in here about giving kids their own space, but this looks like a display room and not something that reflects the kids’ personalities at all.

That roll down United States of America chalkboard is so cool! Can they actually write on it? I love the design of the shared room.

I really love this décor! Im not sure if I would have loved it as a kid but then again maybe kids now days like it! Being a grown up is important to kids!

Boys and girls and–for that matter–very little kids and very big kids–have always shared rooms. They figure things out–dividing up the four walls, for example. The fact that the four walls don’t match will be less embarrassing than the fact that the room was obviously decorated by mom. The point is for them to work it out, even if that involves some argument, even if it involves solutions that aren’t aesthetically pleasing to adults. It’s good practice for sharing a room with their college roommates and their spouses.

I would have loved to see a photo of the closet lego storage.

The canary yellow is my choice of color for a kiddy room, too, you can’t go wrong with such a happy shade! I think your styling is great for a children’s space – cosy & fun.
oh, & btw, your kids are adorale 🙂

So gorgeous! Reminds me of my brother and I when we were little.
Madeleine, The Daily Mark

Fabulous. I was planning to use some Ikea shelving as a room divider as my older daughter is really needing her own space and privacy.

Brilliant Idea, love that brightly coloured bowl, where is it from?
Rosie
www.rosedogandco.blogspot.com.au

It’s creative and genius and fun and funky and I love it. <3

Beautiful room! Where is the dresser with mustard bins from?