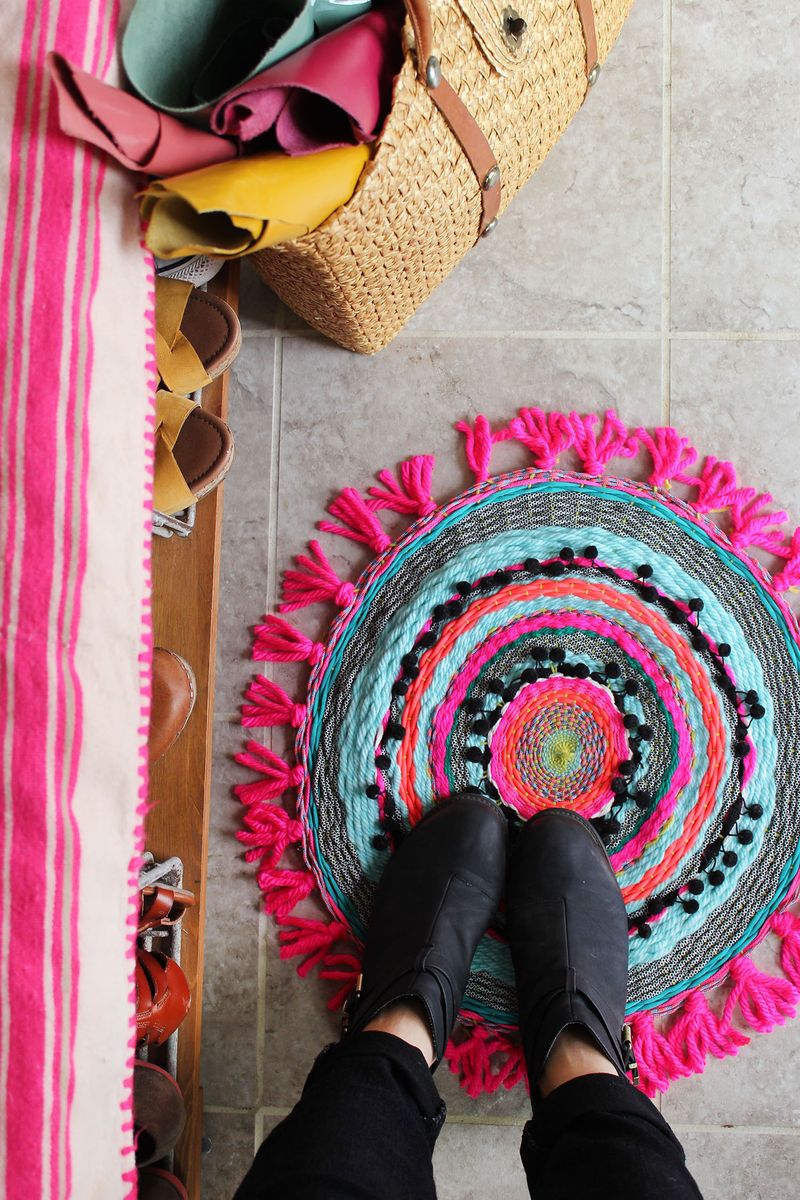 I am on a mission to see how many different home decor items I can weave! Just kidding but not really. Weaving is such an ancient skill and it makes me feel connected to generations of women (and men) from all over the world that have woven things both out of necessity and to share their cultural heritage through tangible items more than any other skill I’ve learned. I like combining ideas and introducing fresh life into traditional methods, so when I first saw this woven mat via Pinterest, I knew I had to make something similar for our house.

I used a variety of materials to get different textures for this rug but also changed up the directions so that it has 60 lines rather than 32. I like that it allowed for a tighter weave at the edges since this rug might get a little bit of foot traffic. I also used a lot of paracord because it comes in such great colors and patterns and is as utilitarian as twine or jute. It’ll hold up well, too. The pom pom trim is for fun but if you are making a rug for a high traffic area, you may want to skip it. 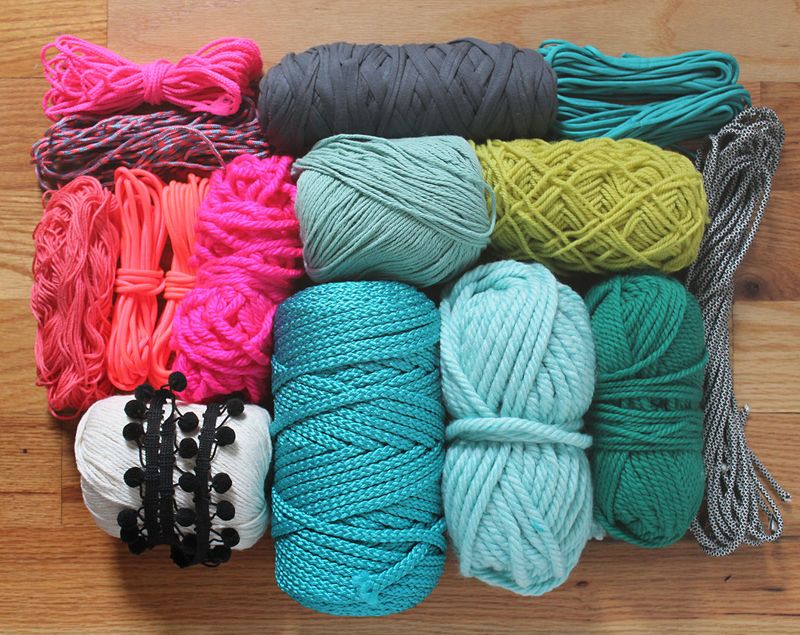 Supplies
– a variety of yarn, paracord, twine, rope, strips of fabric, pom pom trim, etc.
– cardboard with at least a 22″ diameter (or foam board)
– scissors or X-Acto knife
– pen
– ruler 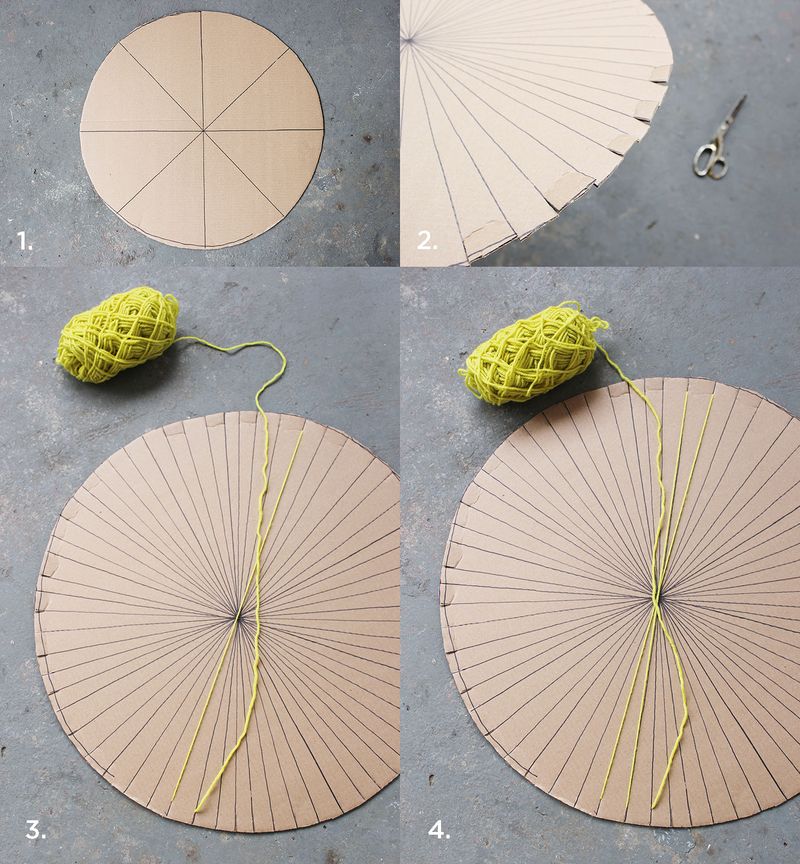 Step Two: After you’ve drawn your lines, prep your cardboard loom by cutting into the edge on each line about 1″. The slits will keep your yarn in place as you weave.

Step Three: To get started, tape the loose end of your yarn to the back of the cardboard near the center. Then push it into one of the slits and wrap it around the front of the cardboard. Follow the line to the opposite edge and push it through that slit so that it wraps around the back and comes back to the front side through the next slit to the right of the one you started with. Follow the line to the opposite edge and wrap it to the back side making sure it goes through the slit to the left of the first slit.

Step Four: Continue wrapping your yarn around your cardboard in a counter-clockwise fashion until you have come full circle. 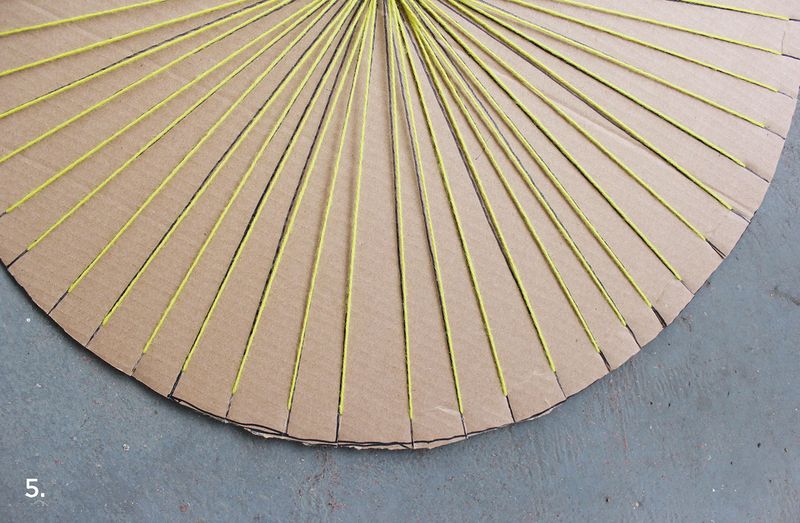 Step Five: Each of your lines should have a corresponding line of yarn to match. Tape off the end of your yarn on the back side of your loom. 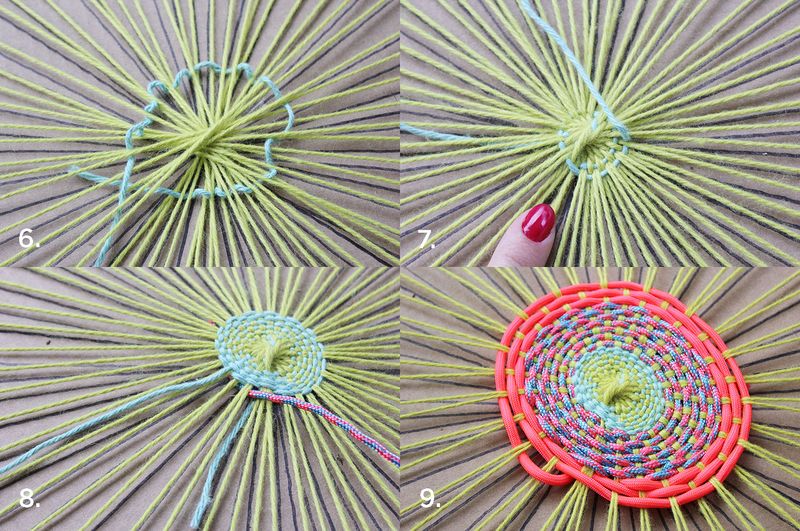 Step Six: Since the space between lines is tighter at the center, start with a thinner yarn. Cut a 4′ length (or so) and tuck one end underneath the lines (your warp) with about a 4″ tail hanging loose, and then weave the other end over and under every two lines until you’ve reached the lines where you started.

Step Seven: There will be an extra set of lines where you meet up so go under (or over) four instead of two and then it will get you started on your next row so that you are doing the opposite of what you did on the first row. Pull snugly as you wrap around each time. You want a tight weave at the center.

Step Eight: Once you run out of yarn, tuck the last 4″ under your weaving. To add in a new length of yarn (the same or a different color/thickness), tuck about 4″ of one end under where your last piece would’ve come up had you not traded colors/thicknesses. For a more detailed explanation of this, see steps 13 and 14 in my weaving basics tutorial.

Step Nine: Continue adding different colors to create circular stripes. You can see the section that has four rows instead of two more clearly in this image. 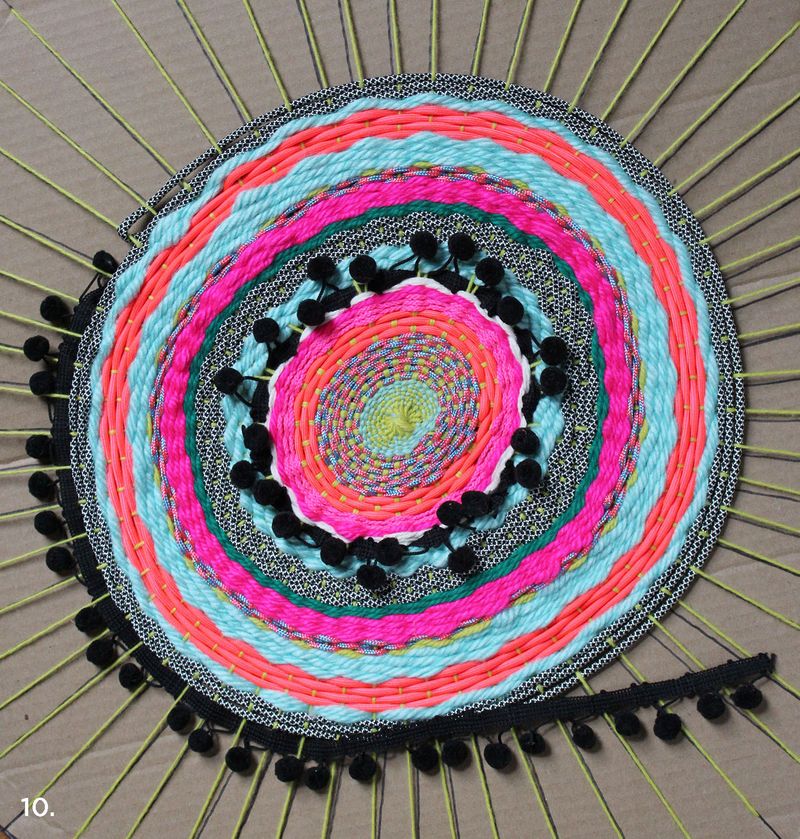 Step Ten: Once you get about 1/3 of your weaving filled, switch from weaving through every two rows to every other row. You can spread things out at that point and there’s more room for thicker pieces to go over and under every single warp line instead of every two. Once you get to the same spot that had four rows at once, just reduce to two rows. You can add in thicker cords and yarns as well as pom pom trims now. 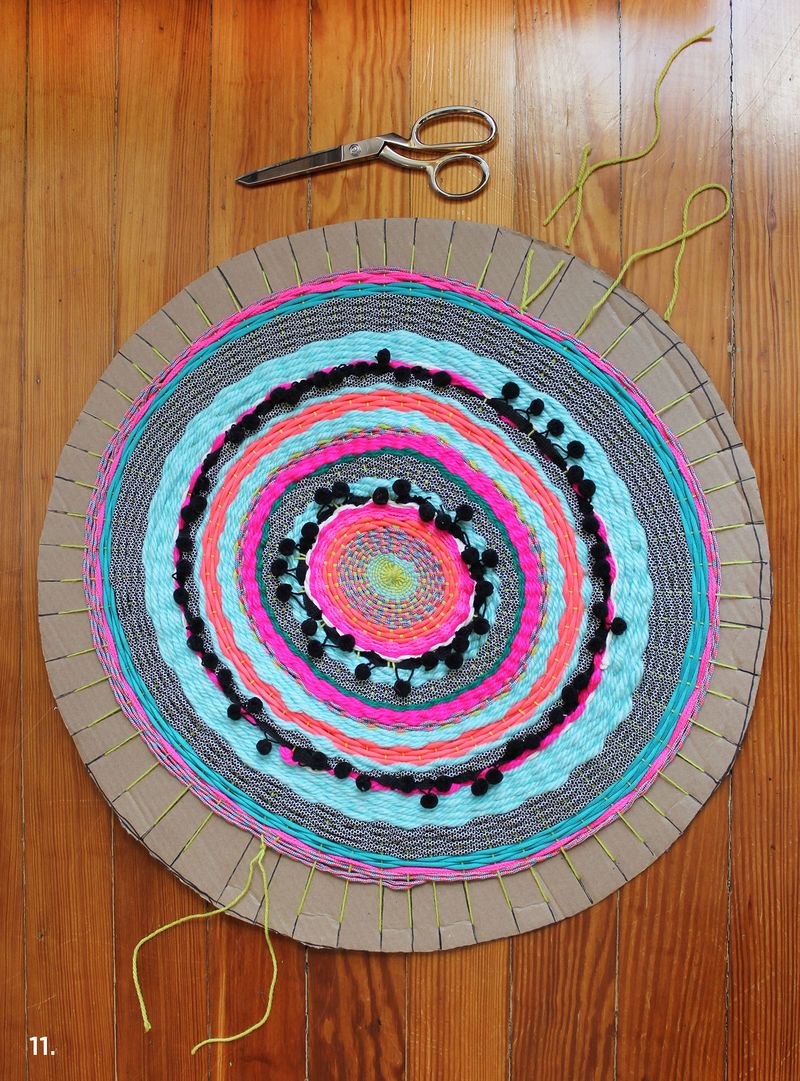 Step Eleven: Finish weaving until you’re happy with the width. It gets harder to weave things the closer you get to the edge! Then carefully cut two strands at a time on the back of your weaving. This will loosen opposite sides. Tie those two strands next to each other into a knot with about 1/4″ of room from the edge of the weaving. This will give you room to add your fringe. Repeat on the opposite edge. Continue until you’ve tied off all knots and have carefully removed your mat from the loom. 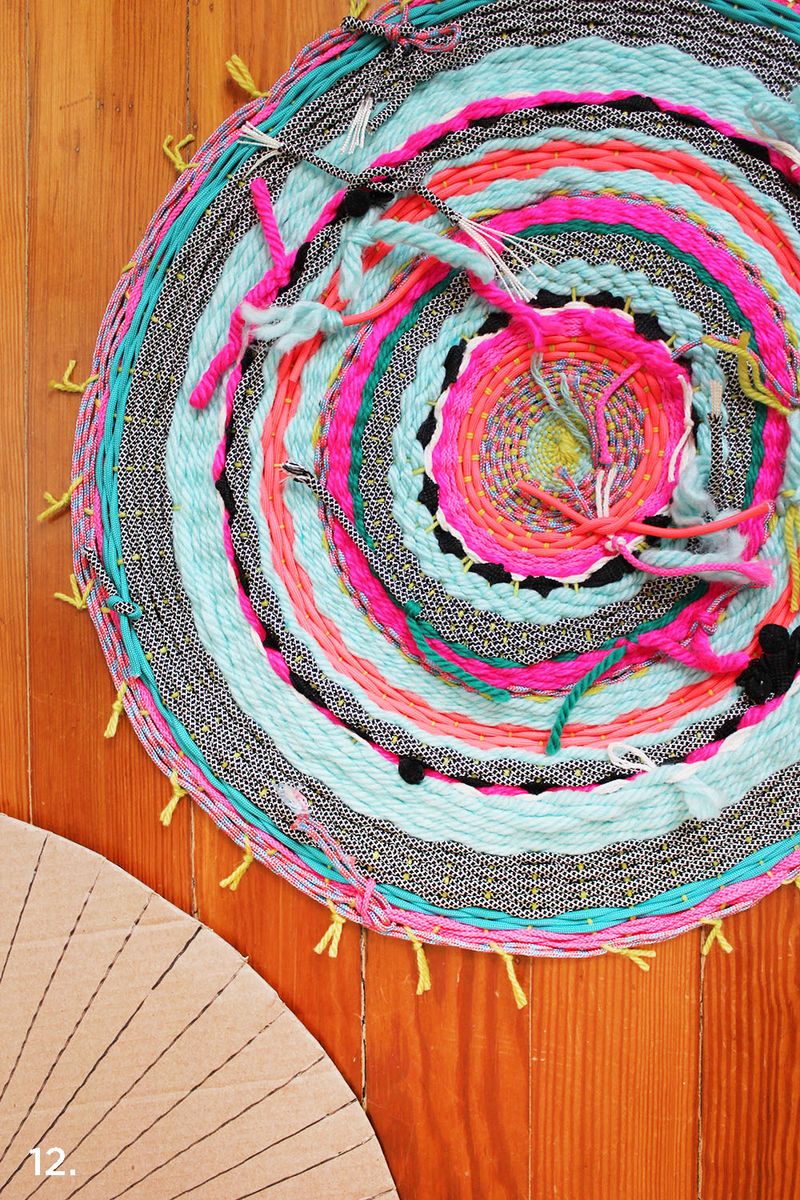 Step Twelve: The back of your rug will be a little messy. You can gently tie loose ends together in knots or even stitch them with thread to the back of the mat. 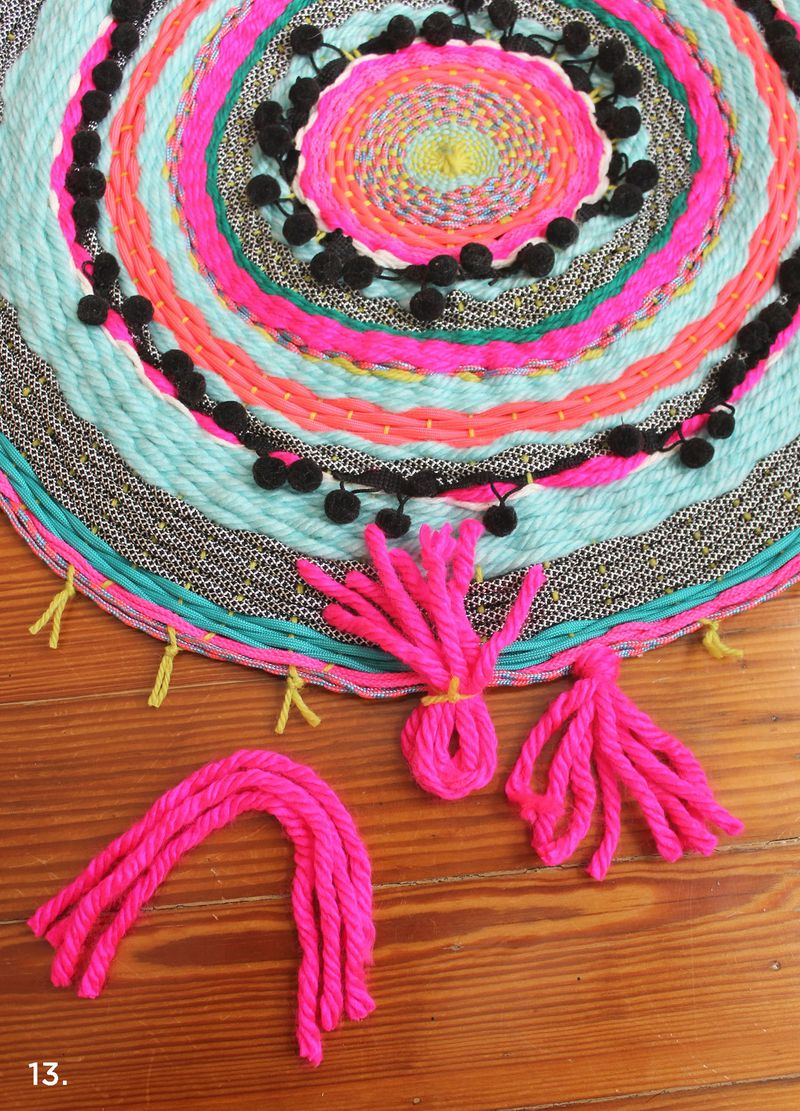 Step Thirteen: Trim your warp knots down, and then add your fringe by cutting 3 or 4 strips of yarn that measure about 7″ long. Fold your fringe in half and tuck it through your knot as shown. Pull your loose ends down through the loop and gently pull. Trim your ends. For a more detailed explanation, see steps 17-21 in my weaving basics post. Repeat all the way around your rug. 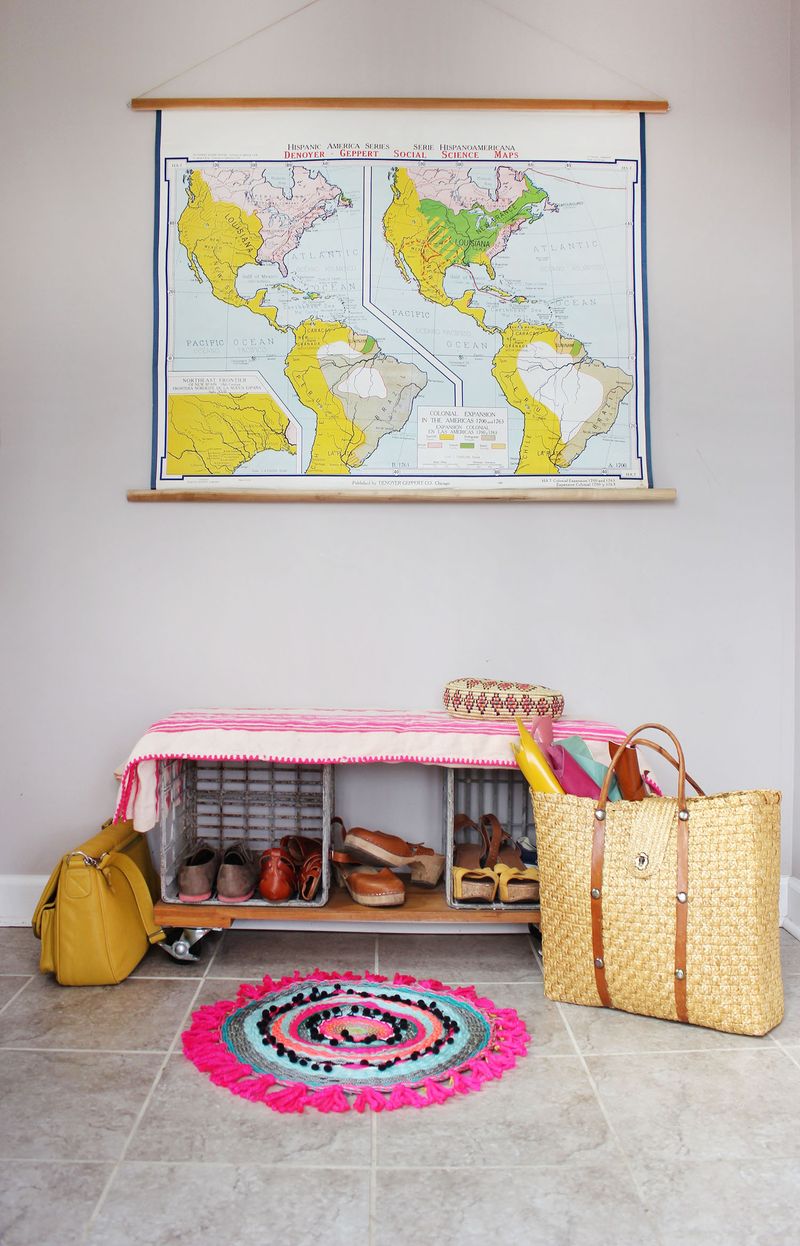 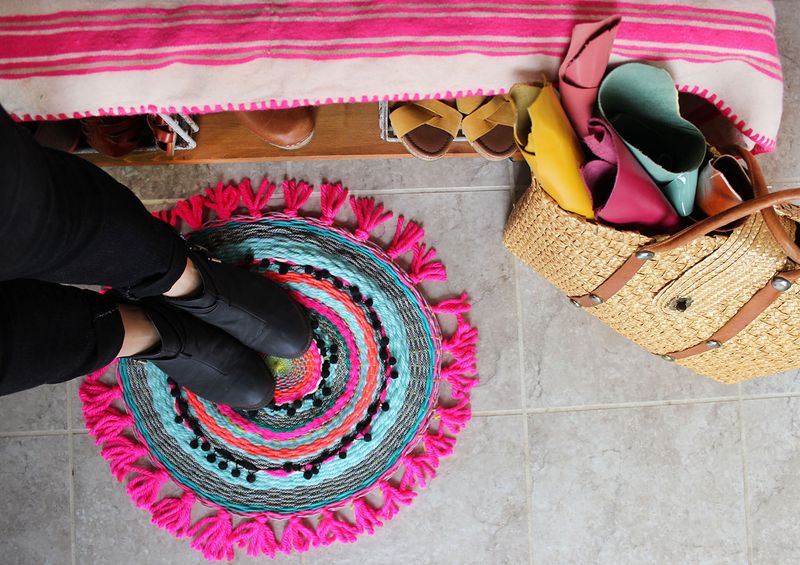 The end result is the happiest little rug I’ve ever owned and the perfect thing to bring a little more excitement to my studio. As I was making this, I thought it’d be really fun to turn this into a pillow. Pretty sure that needs to be added to my woven home goods list! –Rachel

Credits//Author and Photographer: Rachel Denbow. Photos edited with the The  Signature Collection.

Hi I followed this pattern and have a question. This pattern and others recommend an even number of lines to use as a framework; this works well in the centre when 1 goes over 2 strings at a time but for most of the rug you will go over and under each string and once you come full circle, you have to go over 2 lines to go the opposite way (under instead of over etc) and this has created a spiral ridge around the mat which doesn’t look right. Please advise how I avoid this.

Hi Margaret! If you message Rachel (the author of the post) she can help 🙂 https://smileandwave.bigcartel.com/contact

Could you do other and sell it ?

I made one of these but as soon as I cut it off the loom it became a curvy dome and won’t lay flat. I made a bubble pillow out of it instead but how can I make the next one lie flat, please? Thank you for the tips!

You have to make sure that you don’t tighten the weaves too much or push it towards the center, It will make a “hat”.

Did you ever try making a pillow with this method?

We made two of these and both rounded up like a bowl. We couldn’t get them to lay flat. At suggestions

Waw, in love with the idea of making my own mat using all my own colours!! Amazing-truly. I think i might actually try this TONIGHT!

This is so awesome! I really want to make my own. Great tutorial as always 🙂

My daughters and i love this! So much that I made each of us a weaving circle and we got to work. Ours aren’t laying flat, though. Any ideas why this would be? We’d love to make another that can actually be used. Any advice would be appreciated 🙂

Hi A Beautiful Mess- This tutorial is very similar to my own blog post of a pom pom rug from last February: http://saraplath.blogspot.com/2014/02/diy-woven-pom-pom-rope-rug.html

First of all I’d like to say I’ve visited your blog often and recently bought your book for a friends b-day.

This morning I came across your post on the Woven Circle Mat DIY from earlier this year on 5/5/15. It looks like we were both inspired by the same rug on the Free People blog. I was inspired by this rug a year ago when I couldn’t find one to fit in my tiny bathroom. I searched high and low and stumbled upon a great tutorial. I put my personal spin on it making it original and was really excited when it was featured on Apartment Therapy late last year with their post 10 Ways to make a warm and cozy round area rug. I also posted pictures of it on Pinterest… to inspire others to make their own and you may have even seen it there. Please take a look at how similar mine was from last year 2/8/14 DIY Woven Pom Pom Rope Rug from my blog Red Lipstick and French Toast.

I loved this so much! Beautiful rug and i thought the color scheme was perfect. i was so inspired i made my own smaller version and blogged about it!

Yep Love it!
The pink tassel edge is great. Its a great way of using up yarn/cord scraps. My children would also have fun helping on this one.
Going to give it a go!!
Natalie
http://craftymrsjones.com/

This looks so good and really easy to do!
I will definitely be giving it a go!

Beautiful! I have a huge piece of cardboard that I have been holding onto for a craft project and this looks like the perfect project to try. 🙂

I was wondering if you think an oval shape would work. The measurements may be a bit harder, but otherwise I think it would work? Please let me know your thoughts and if this seems possible or if I am making a terrible decision!

LOVE! So bright and fun, I can’t wait to give this a go — thanks for the great tutorial.

Your weaving posts are some of my FAVORITES! It is so easy to do and needs hardly any supplies! I live in Uganda, Africa and I had some friends send me yarn for Christmas because I am so inspired to weave. I saw this post and new I had to make this rug for my room! But I couldn’t find a piece of cardboard big enough (yet) so I did a wall weaving…SO addicting, easy and it only took me an hour and a half (not sure how long it’s SUPPOSED to take! haha)

wow so pretty! not sure i could pull it off…more diy goodness here yall: https://www.etsy.com/shop/ephemerabyannie