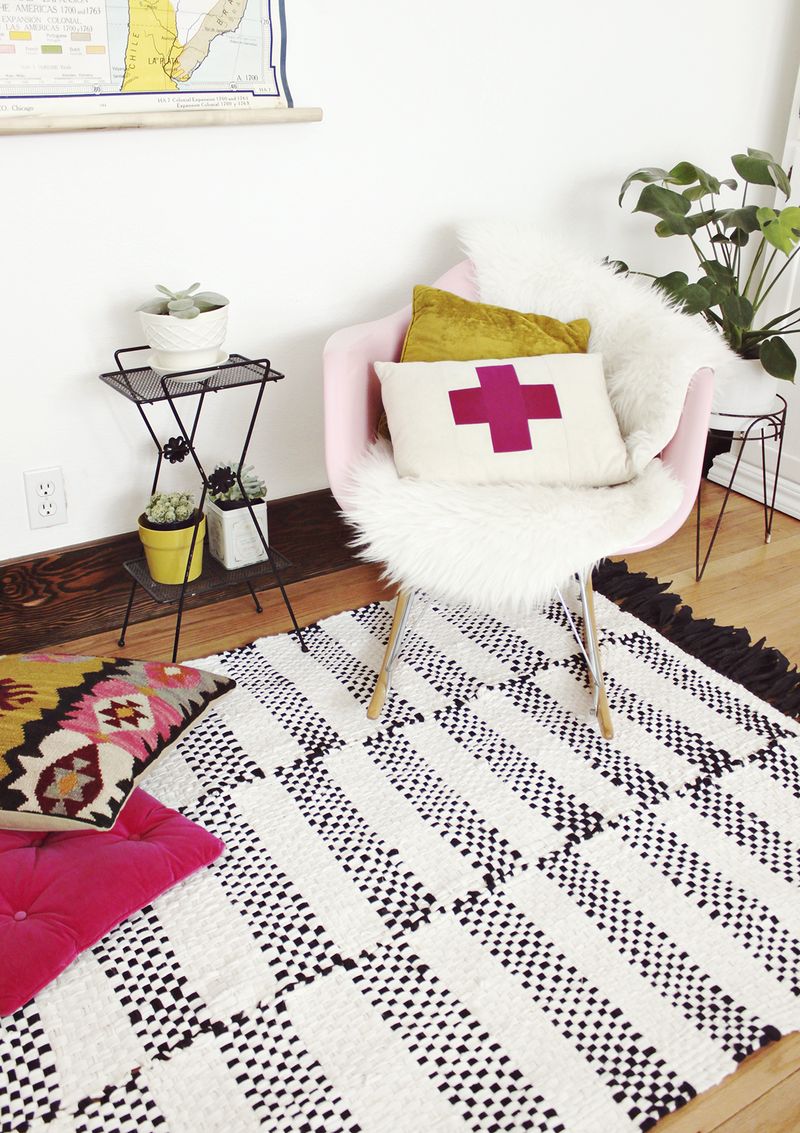 Beautiful rugs aren’t hard to find, but sometimes they’re just not exactly what you’re looking for. Or maybe the one you really love is just not in the budget. I’ve been lucky with two vintage Kilim rug finds and also have a fun graphic rug from IKEA but still have some bare floor space that I’ve been wanting to cover. I’ve also always wanted to try and DIY a larger scale rug that wouldn’t fall apart or wear out in a few weeks, so I decided to jump in head first with a woven rug. It turned out even better than I expected and only cost me about $30 to make. 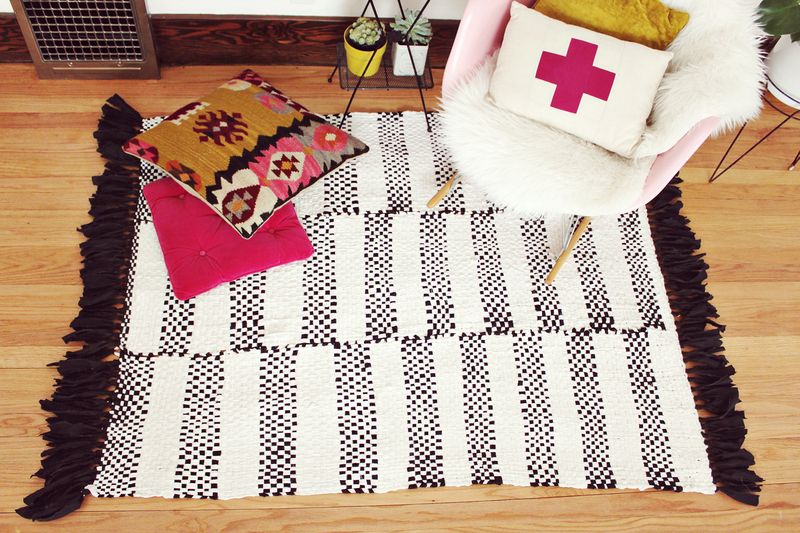 1. Supplies: 4 yrds. of black fabric yardage (use broadcloth and take a coupon), 2 full size flat sheets in white (thrifted), 4 – 2x2x6 boards for the frame, one box of aluminum nails (150+ ct), hammer, scissors, ruler, pencil, and a ton of Netflix shows to watch as you weave.

2. Build your frame according to the height you prefer. You can cut your beams or you can just nail them with extra length on the ends. Nail two nails in each place where your beams meet so they won’t get wonky. Nail your nails about 2/3″ apart from each other. I used 66 nails on the top and 66 on the bottom. Measure them out with a ruler and pencil to keep things even.

3. Cut 1″ strips out of one of your washed sheets as shown. Don’t cut stripes through to the end but cut all but 1″ from the edge. Then start another cut 1″ down the line but don’t cut all the way to that end. This will create a zig-zag, so you’re lengthening your cut of fabric without having to have knots every few feet. This fabric will make up your warp, the fabric that runs up and down your loom.

4. Tie a loose knot in your first strip and loop it around the bottom left corner nail. Then wrap it up and down until you run out. Tie another strip to your end and continue until you’ve finished. Make 1″ cuts along the top of your second sheet and rip your strips. It’s faster than cutting and you’ll get consistent widths. Pull loose threads out as you go.

5. Do this for your black fabric as well. 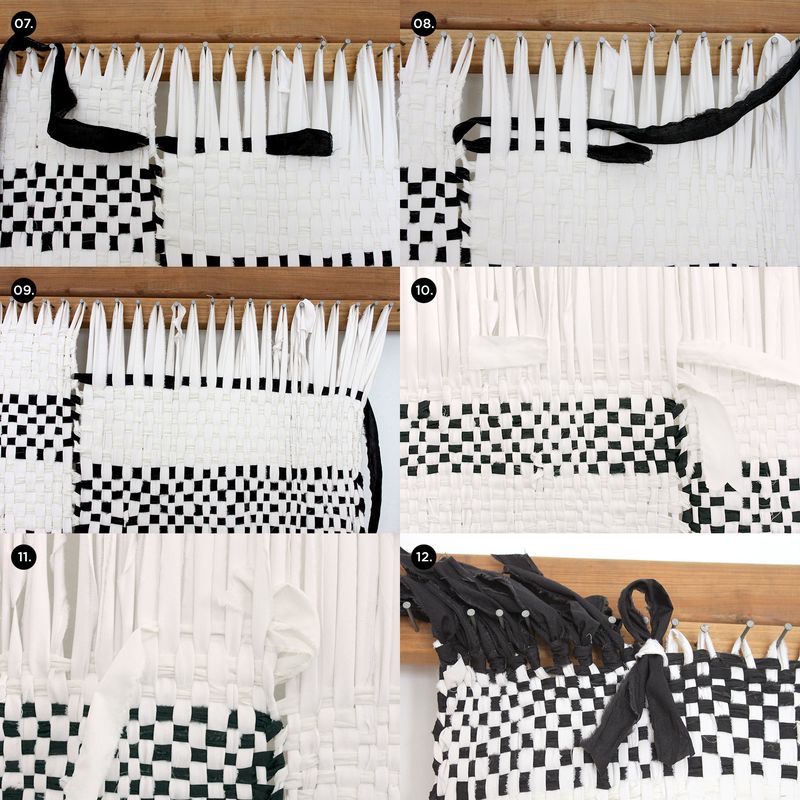 6. Using your first strip (I started with white at the bottom of my frame as a border), tie a knot in the bottom right corner and weave it over and under all the way across until you get to the opposite corner. Weave it through your loose knot to secure your starting point from slipping out. Now go back the opposite direction weaving over and under the opposite strips until you get to the original corner. Press your strips down as you go for a tight weave.

7. If you want to continue with solid strips across your rug, continue in this way. However, I wanted three sections to create a pattern. So after weaving three rows all the way across, I counted my nails across and divided by three (66 divided by 3 = 22). I started my fourth row from the left edge and counted across 22 nails. I taped nail #22 because it will be a seam. Starting from that nail I counted across 23 and taped that nail. That became my second seam. The rows won’t be exactly even because they do share these two seams but that’s fine.

8. This photo shows how to start a new block without using a knot. Take a strip of your next color and start about eight strands into your block. Weave it through to the edge that has already been completed (or at least the edge of your block if starting a new row). Each block will share a strand with the block next to it to keep things together. It’s the seam where the two colors meet.

9. Make sure you weave around that shared strand and then instead of going back in and weaving the opposite of over and under, you weave through the same ones. This will double the thickness of that strand a little, but it allows you to weave in your ends without knots and will be secured once you add more rows and press down firmly.

10. Finish that row and then double back weaving over and under the opposite strands until you’ve finished six rows.

11. If you run out of fabric before you finish a full block, simply finish what you have. And if it’s in the middle of the block, end it on the back side. If it’s on the end of the block, you can weave it up with the next strand as shown. To add another strand mid-block, overlap it about 4-6″ weaving it through the SAME strands as the strip before and pressing the starting end through to the back so it doesn’t show. Press the rows down together and then weave to the end of your block and start back the opposite direction going over and under the opposite strands again. Continue all of your blocks and expect it to be a long-term project. Once you have finished your last row of blocks, you can weave all the way across again with one of the colors to give it a border. I wove all the way up to my nails, so it was a tight squeeze on that last row. But I didn’t want any excess.

12. I added tassels by ripping more black fabric and cutting 9″ strips. Then I folded them in half, unhooked one strip of white warped fabric from its nail at a time, and pushed the folded black strip through. Then I pulled the loose ends through and tightened it. Once done I trimmed my ends down to make them even.

This project is definitely not a quick one, but it was really satisfying to finally tie that last tassel on and see my new rug! There are a number of ways to create patterns in weaving, but it’s best to start with something simple on your first few tries until you’re really familiar with it. Then you can try triangles or arrow shapes or more than two colors. My rug ended up measuring about 4’x6′ which isn’t exactly big enough for a living room arrangement but would work in my kids’ shared room or under a desk in a studio. 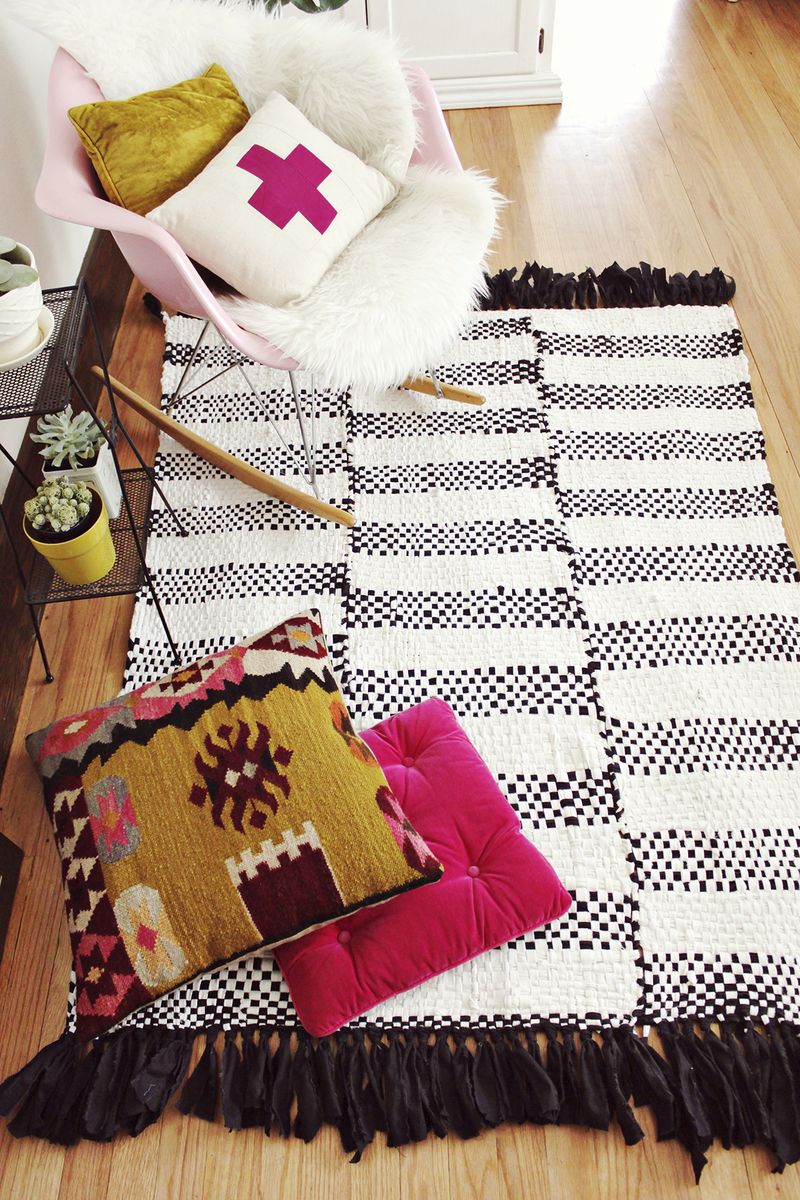 It was one of those projects that I could work on an hour at a time throughout the week and longer on the weekends. It’s machine washable since it’s made of cotton and I might even spray it with something to protect it from dirty dog paws. I would suggest machine washing all of your fabric and sheets before starting for minimal shrinkage. Hang or lay flat to dry. It is also going to need a rug mat underneath so it won’t slip.

Looking for even more weaving inspiration and instruction? Check out my new book, DIY Woven Art, for great step-by-step photos and detailed instructions teaching you all the basics and stitches you’ll need to create beautiful wall hangings and home decor pieces. –Rachel