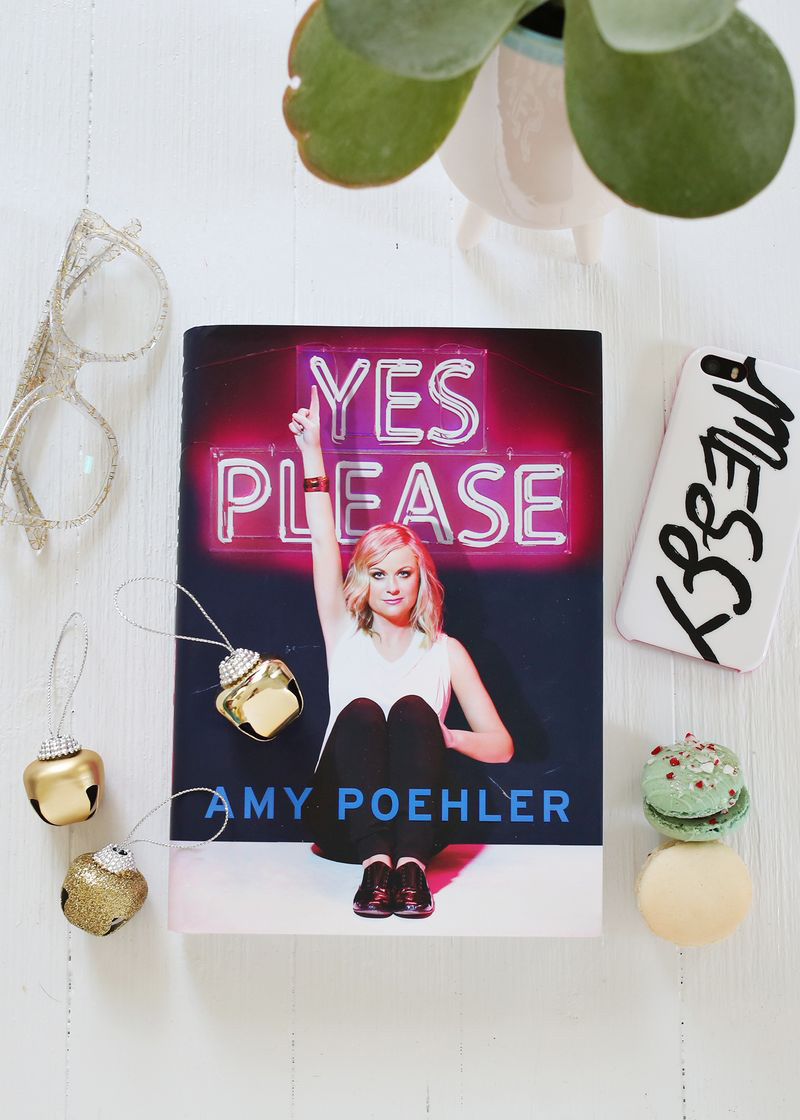 Not to pat myself on the back too much here, but, guys, this was a great book to end on for 2014. Didn't you think so? It was funny, touching, and (as promised) totally affirming. It made me love Amy Poehler even more than I already did, which is way too much for someone I don't know personally.

So now that you know I loved the book (big spoiler, I'm sure) let me back up. Trey can tell you that at first, I wasn't that into it. I was initially surprised by this as I've read a number of books by comedians this year, and I pretty much liked them all. But then I realized that I didn't actually read them, read them. I had listened to them. And part of me wishes I had listened to this book instead of reading it. So if you haven't read it yet, you might consider getting the audiobook instead. The other thing was Poehler spends a bit too much time talking about how hard it is to write a book at first. Which, I appreciate the honesty, but that's not exactly a vote of confidence from an author. I mean, is this book going to be any good if the author is out of the gate saying how difficult this was to write and how long it took, etc. But ultimately I think Poehler was just warming up. She obviously can write, she's made a career out of it (as well as performing), so I think I was just ready to jump into it.

I honestly feel like I learned a lot and laughed a ton during this read, but here's a few things that stand out to me (let's use these to springboard into our discussion):

1. I appreciate Poehler's willingness to admit and talk about a time when she handled a situation poorly.

None of us are perfect. We all put our foot in our mouth sometimes, or just do something that we regret and need to apologize for later. Poehler explained one of these moments from her own life when she performed in an SNL skit where she played Dakota Fanning and (as Fanning, with a deformed doll as a prop) references her upcoming film Hurricane Mary, "Where my sister and I play severely disabled twins." She didn't realize this was a real movie, based on real events. The film was written by Marianne Cooper who had a special interest in the project as her own son was also born with special needs, like the sisters the film is based on. The Coopers wrote to Poehler about the skit, which she immediately regretted, but she didn't apologize to them until five years later.

2. I love how she handles the subject of her divorce and how she talks about her former husband.

Poehler is a celebrity. So we all know about her divorce. I personally didn't want to read all about her divorce, and I didn't necessarily expect to in this book. So when she chose to gloss over that event in her life, simply acknowledging it but saying it's too sad and personal to talk about, I get it. She also references Will Arnett in the book often, usually in a very positive way, highlighting that he's a great father and was a supportive husband. She also thanked him in the acknowledgements at the end of the book. I think choosing to focus on the positive, even when a situation clearly isn't how you wanted it to turn out or isn't ideal in some way, is a very graceful way to live life. And if you can tell a great fart joke AND navigate a public divorce with class, well, you're just a cool lady in my book.

The first thing you ever learn in improv is to say yes. You always say yes to your partner and yes to whatever situation is happening. And Poehler shows throughout the book that this life lesson has served her well. Obviously she's also an extremely talented and hardworking individual as well. So, that makes a big difference in life. But I also think she clearly shows over and over that trying to go with the flow of life (instead of against it) has gotten her to where she is. And I think that's SO encouraging. None of us can control our life 100% of the time. Waves happen, sometimes suddenly and unexpectedly. And Poehler says to surf! Don't swim against it, go with it and see where it takes you.

4. The most unexpected thing from this book for me was her chapter on her trip to Haiti.

First, I didn't realize she had volunteered in Haiti, so I just wasn't expecting that chapter. But then to read about her experience there, seeing all those orphans from her perspective (a mother as well as just Amy Poehler) was heart-breaking. I'm sort of tearing up as I just type this little bit about it right now. I was not expecting this book to remind me to give back and be thankful for all I have, but it certainly did just that. Poehler shows how grounded and "normal" she is for a famous person (a faux award she won while in Haiti), and this was especially showcased in that chapter. It reminded me that I should strive to do more for others in whatever opportunities come my way in my own life. And I appreciate that reminder.

I meant to count how many famous people show up throughout the book, but I lost track. Poehler admits and jokes about her name dropping throughout the book, but man, she's earned it. She seems to know EVERYONE. I guess that's partly from being on SNL for so long. Anyway, if you like reading about famous people, then you probably loved this book. :)

So, what did you all think? Loved it? Thought it was "just OK?" Lost the cord to charge your kindle halfway through? What—what happened, what did you think? xo. Emma