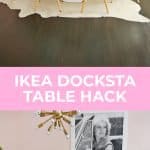 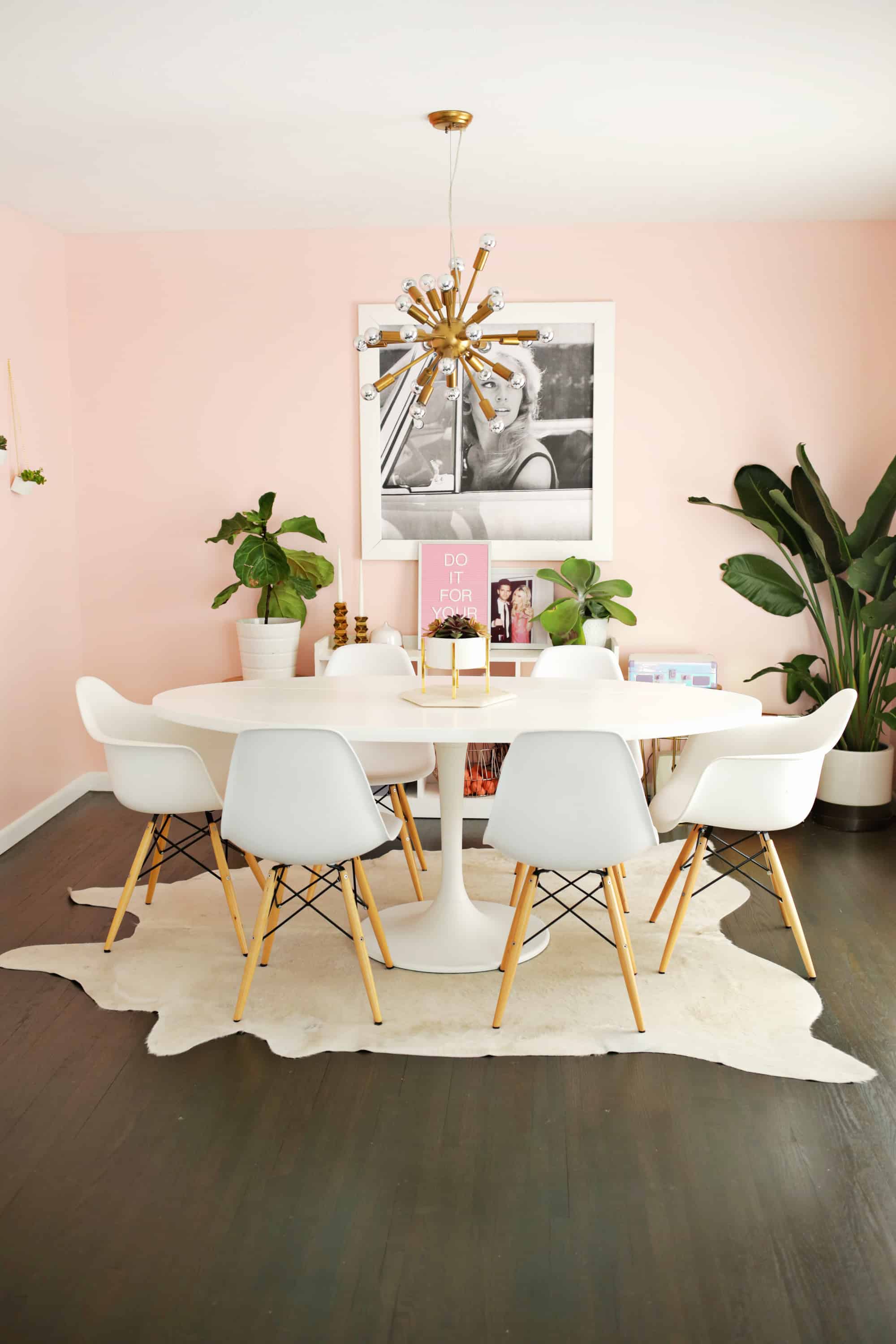 Ohhhh man, this is a fun one! So, since we’ve been in our Nashville house for over three years now, I’ve started to get that itch to do some room refreshes and our dining room was on that list since it was one of the first rooms we did when we moved in. We’ve had our DIY dining table for six years now, so I thought it might be fun to do a different shape to change the feel of the space. I had been drooling over some oval tulip-base dining tables that were big enough to fit six people, but I couldn’t find one within our price range. So I tried to think of how I could DIY it on a budget instead. I noticed pretty quickly that vintage tulip table bases (just the bottom part) can also be pretty pricy, but then I remembered that Ikea sells a DOCKSTA tulip table and that we could use the base for this DIY if I modified the top of my existing table to be an oval shape! Since this was going to be a larger tabletop than what the Ikea base currently comes with, I checked out the sizes of a few other tulip dining tables with similar top sizes just to make sure the base would be the right size for safety reasons. And I found several with a similar base size which supported a larger tabletop like ours. 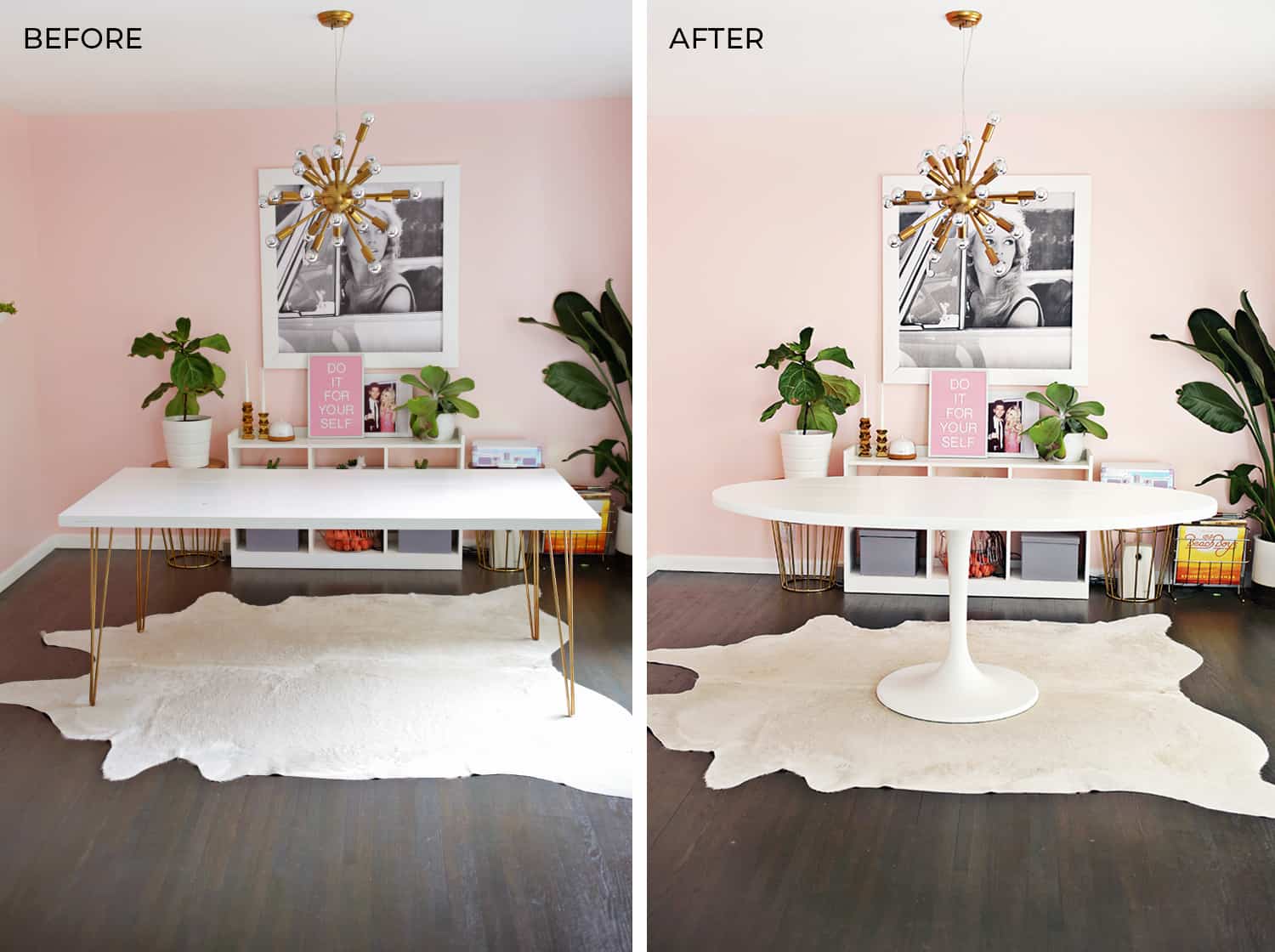 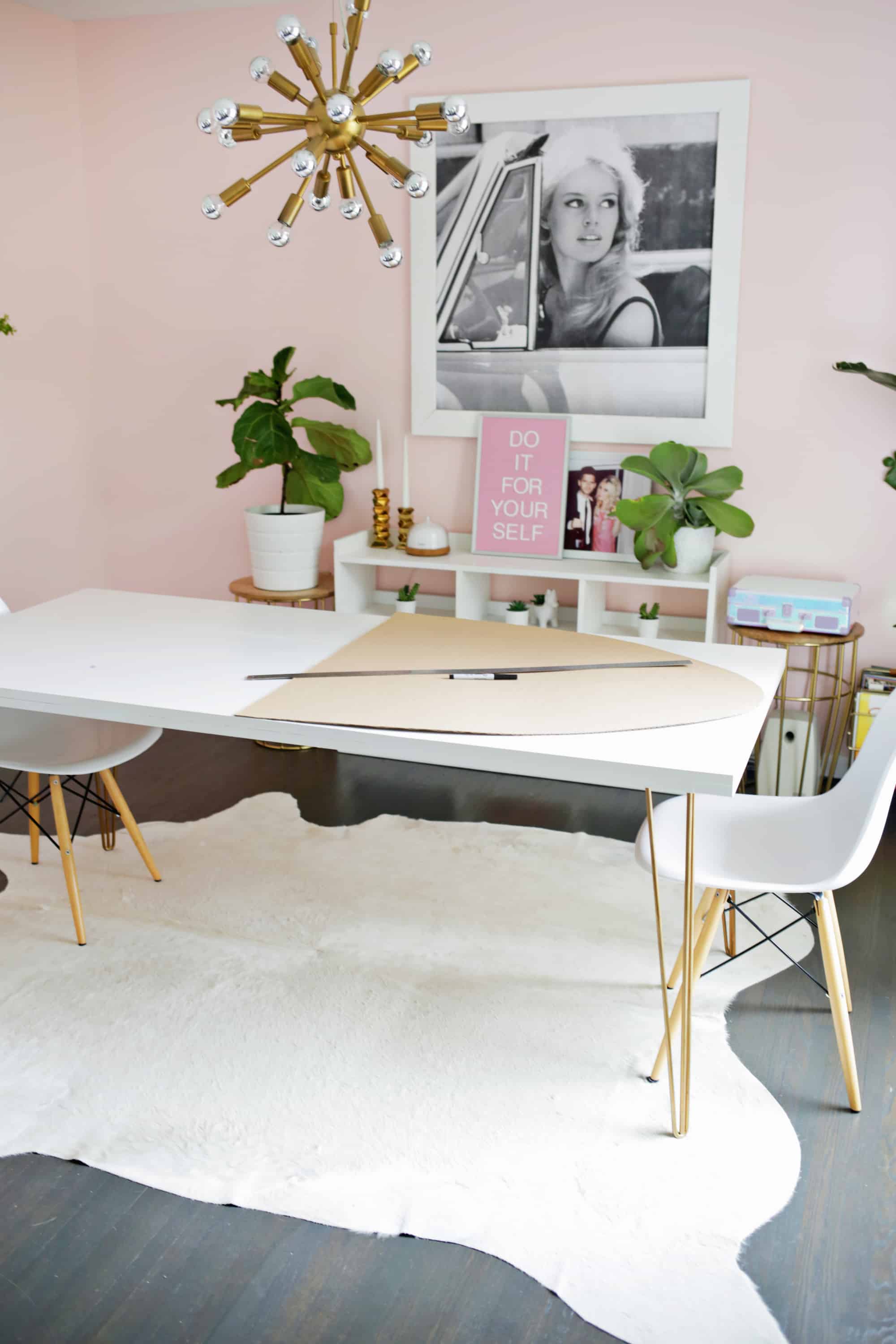 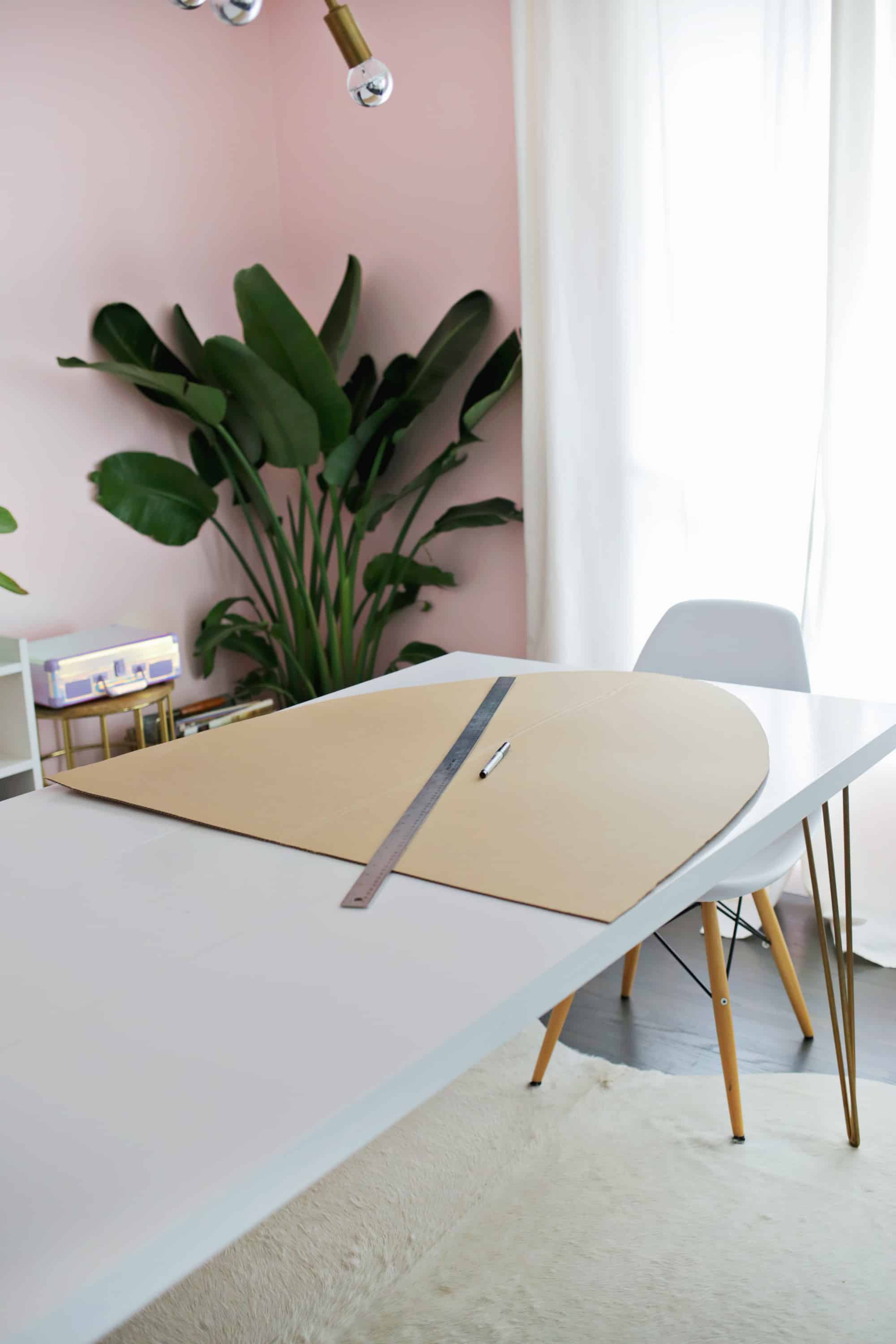 I used a piece of cardboard that was cut to fit half of the original table shape as a template for my oval shape. I centered a large round tray at the end of the table to trace the tip of my oval and then curved a line to the middle point of the table at the end of my cardboard. I wanted to have a definite oval shape but not be so skinny that you wouldn’t have room for a place setting at the ends of the table, so I played around with the curve a bit until it looked right. Then we cut one side of my oval template to that curve and folded the cardboard in half so we could trace the other side of my oval. 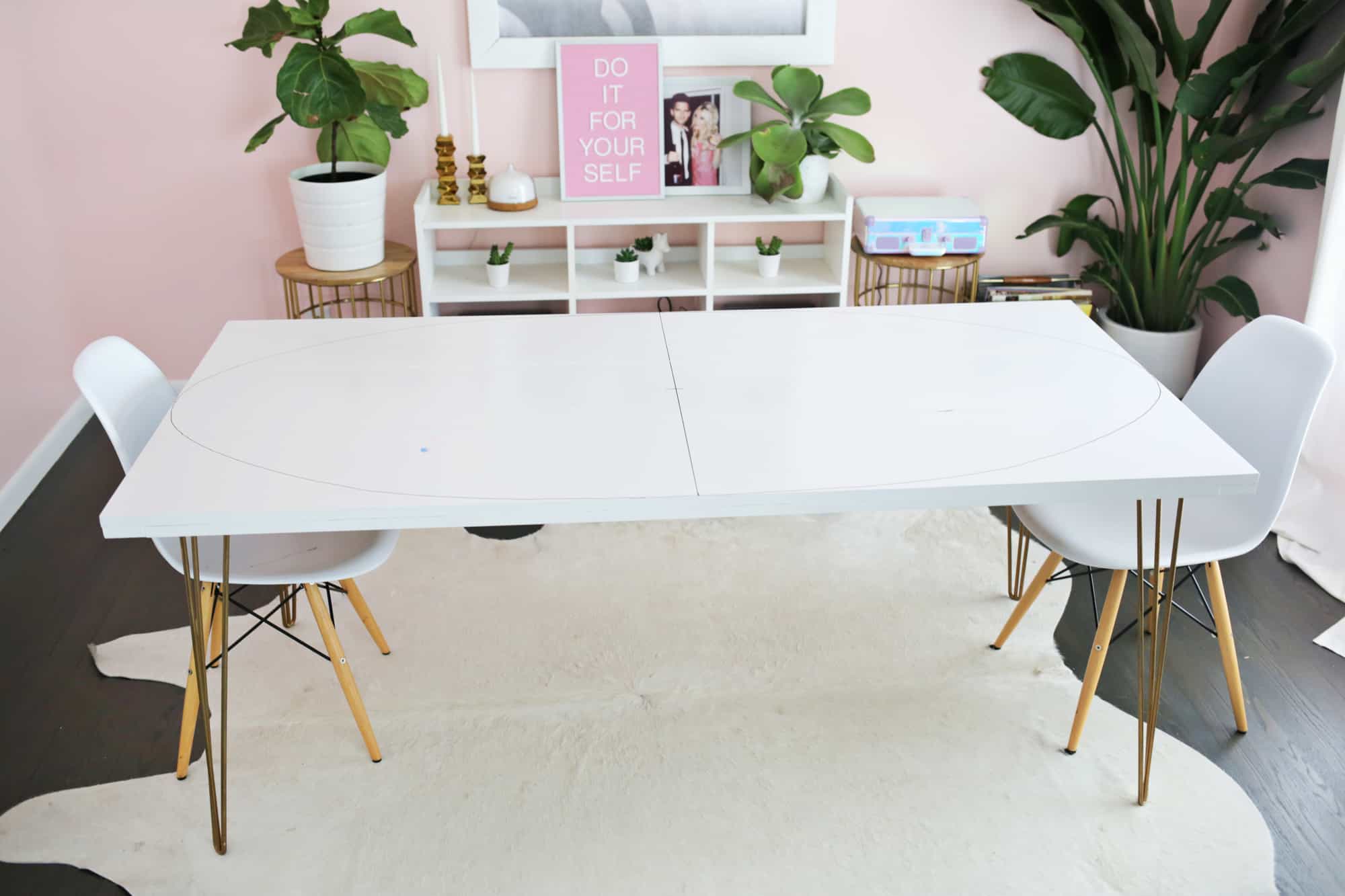 Once we traced the oval on one end, we just flipped it around to trace the other side so we knew all the angles would match. 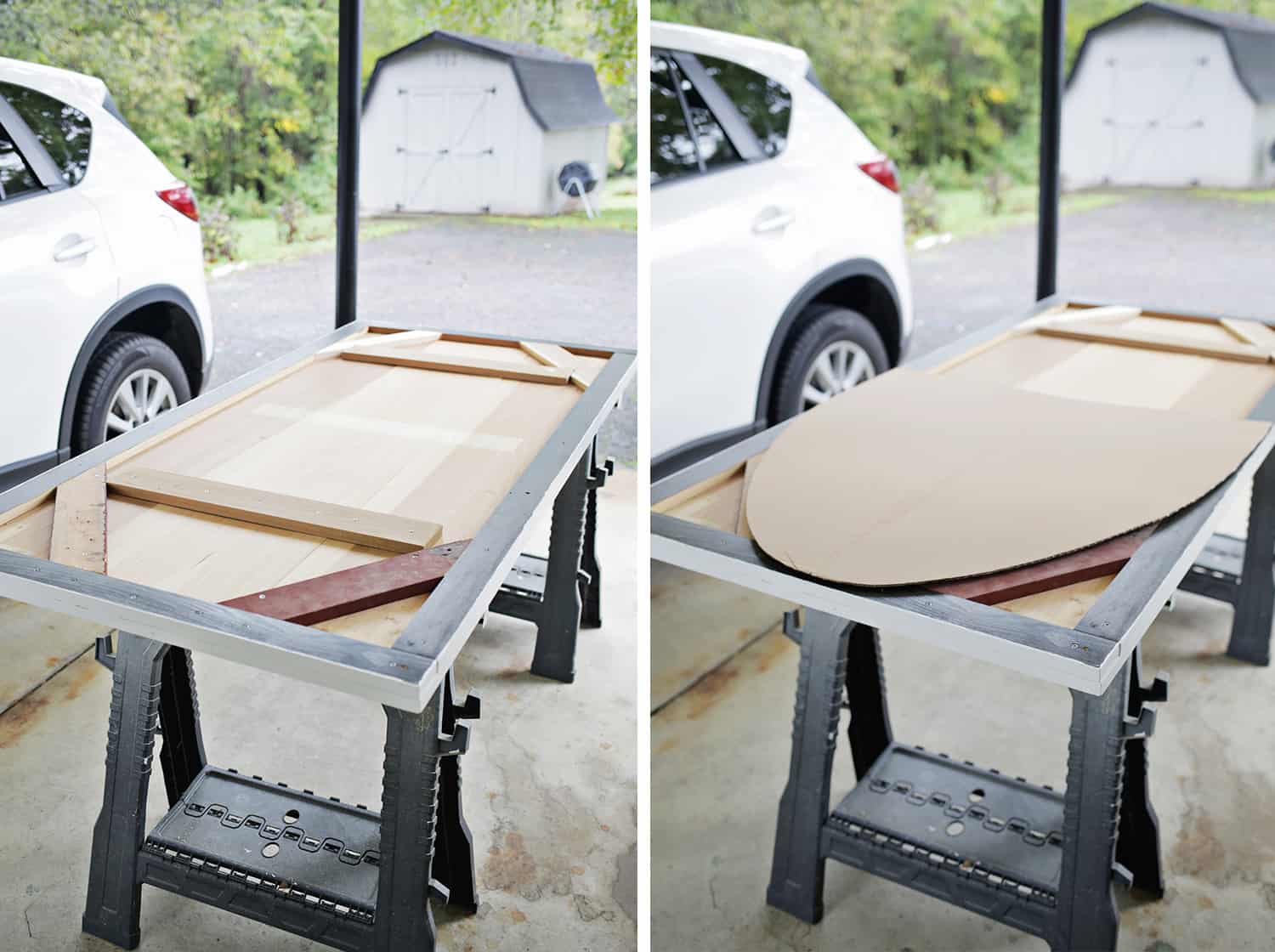 Then we removed the existing legs of the table, flipped the table over, and traced the template again on the bottom so we could see where the cuts would be to remove any screws in the way from the existing board braces that were keeping the table planks together. I also wanted the table to look twice as thick as it actually is to give it a more solid appearance and hide the brace boards. So using the traced lines on bottom as a guide, we cut and added scrap pieces of wood that cover that line around the table. You can see what the extra boards look like in the photo above and see how they cover the whole curve path of the oval. When we cut through the oval, it looks twice as thick from the sides—neat trick, huh? 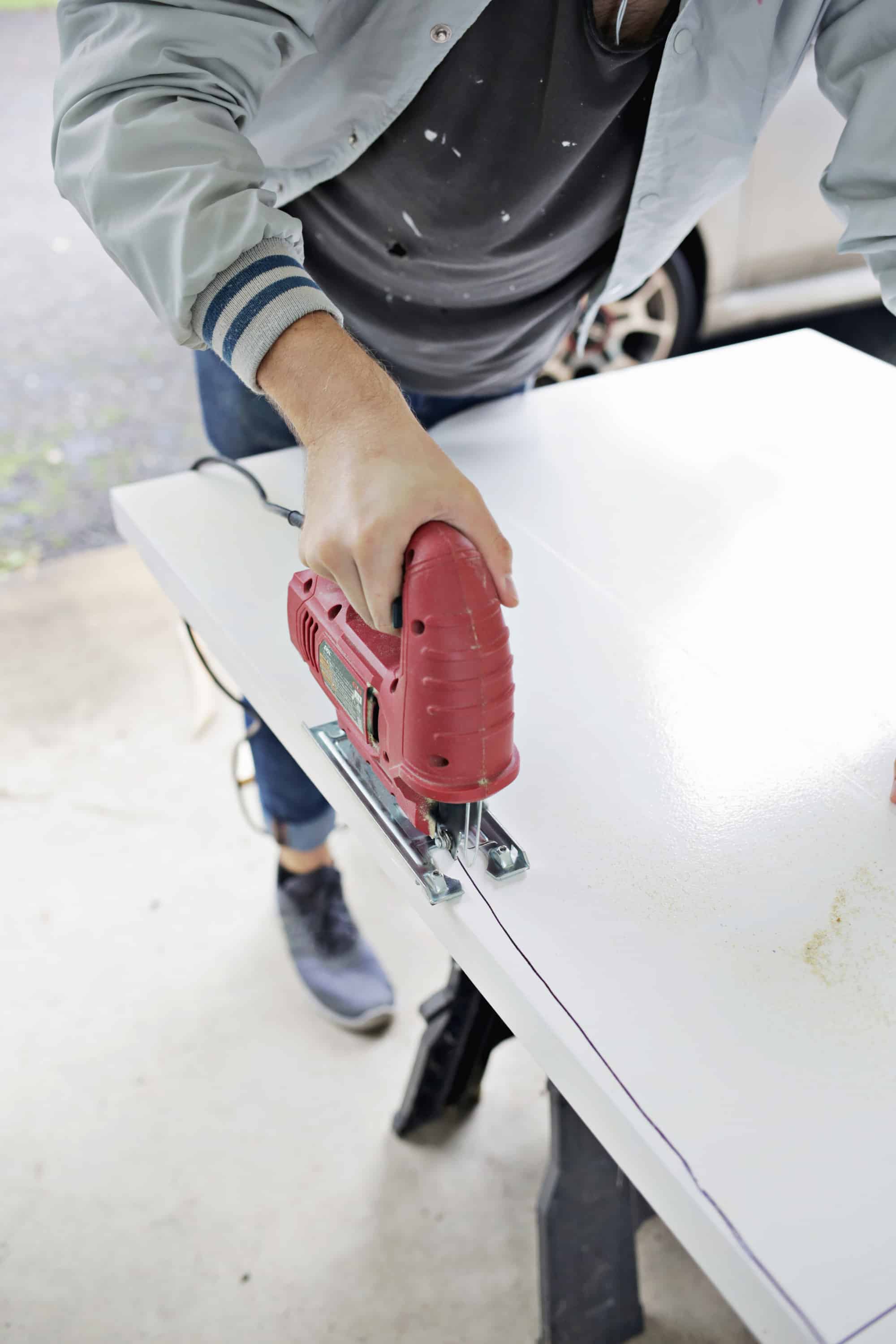 Once the pieces on the bottom were secure, we flipped the table over and used a jigsaw to cut the oval shape we had traced on the top. We used various degrees of sandpaper (going from very rough to very smooth) to smooth out the sides as best as we could. 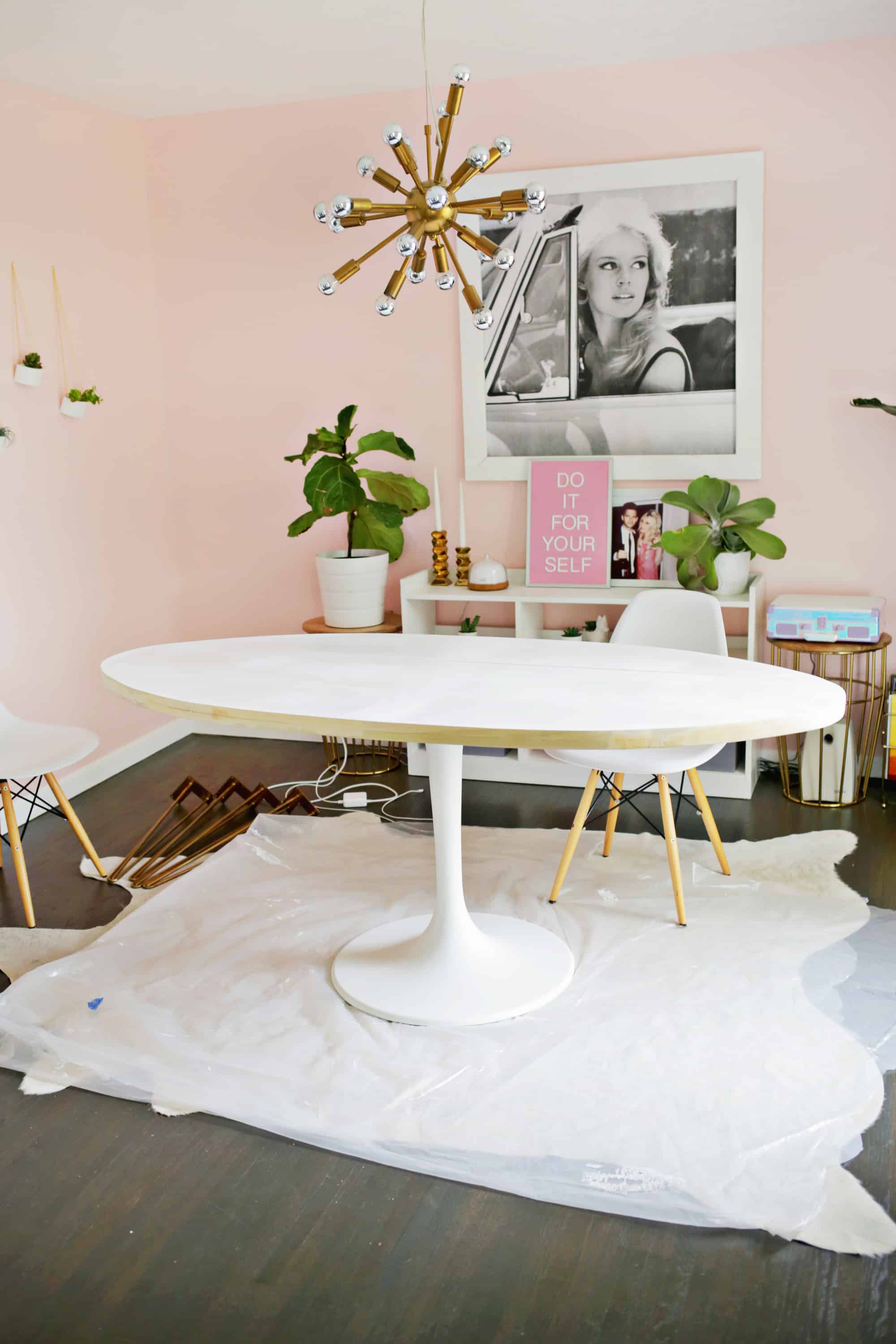 Then we mounted the table onto the Ikea table base and did a coat of primer and a few coats of eco-friendly, non-toxic lacquer on our tabletop. I like to use lacquer for tables since it dries harder and glossier than regular paint, so you’ll get more wear out of your table before needing a touch up coat. 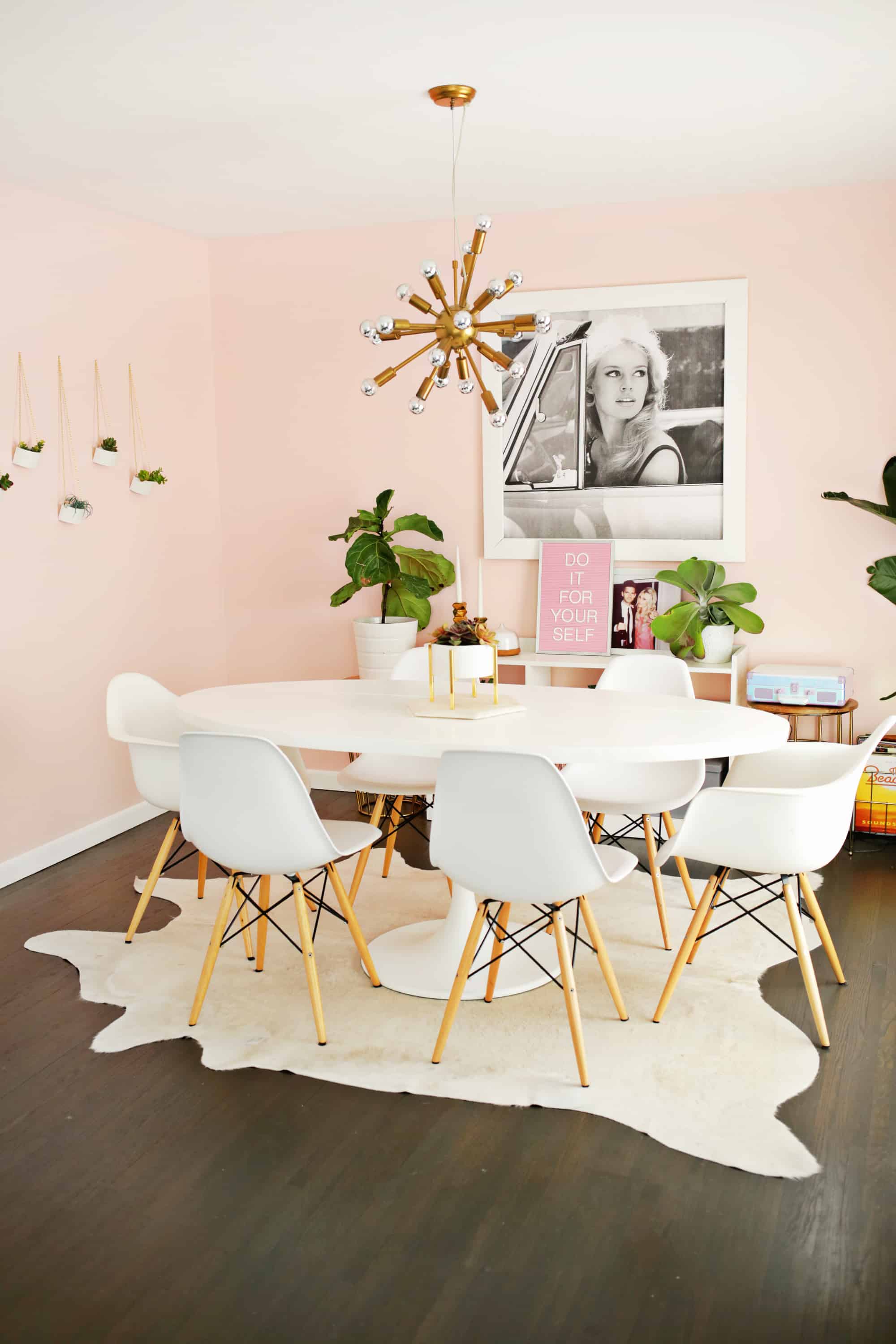 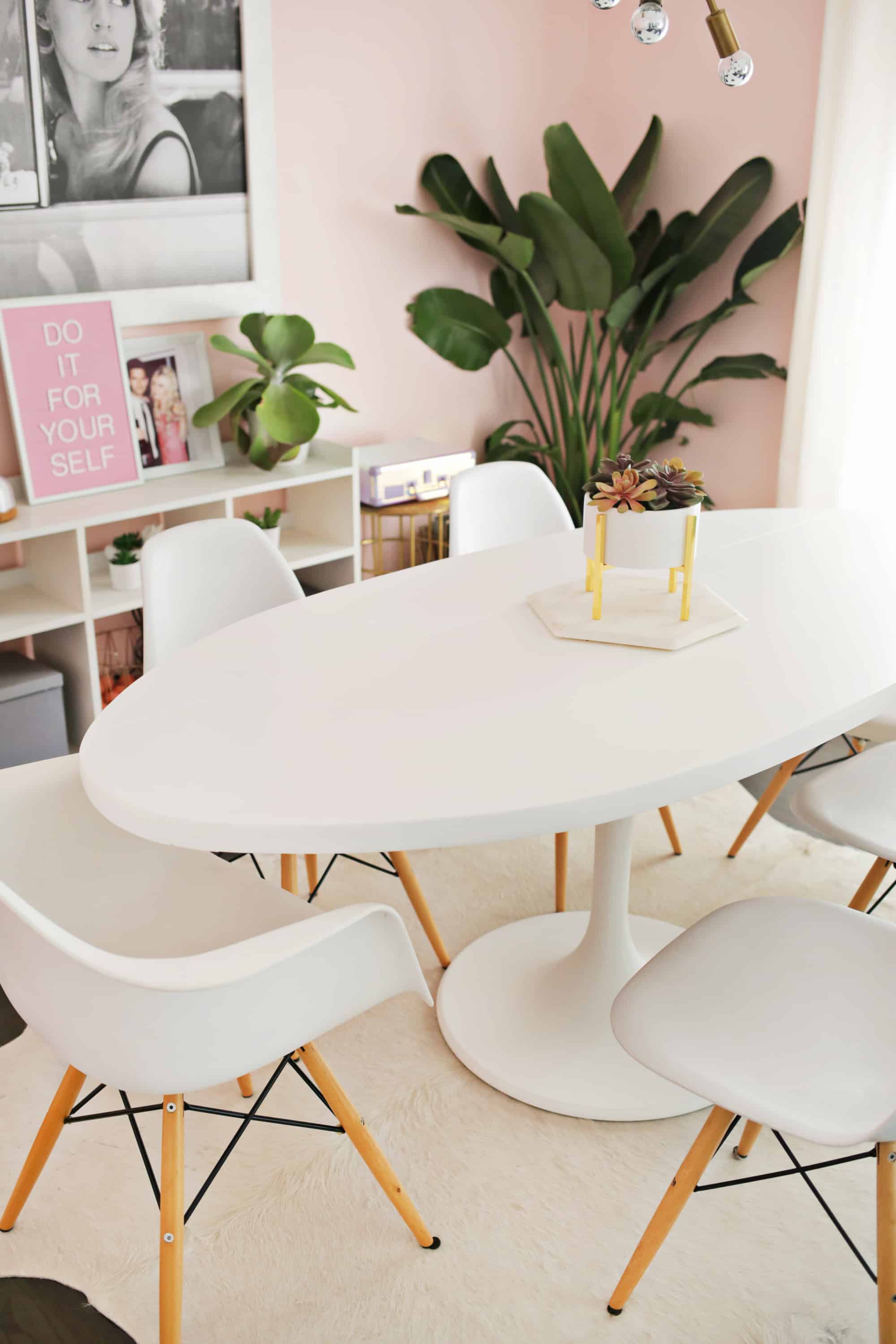 Once the tabletop was fully dry (I usually let lacquer set for at least a few days before putting anything on top), it was ready to use! I love the fun new shape of the table and the extra ’60s/’70s vibes that it adds to the room as well. So as not to waste any parts, we switched out the tabletop from the Ikea table with this table, so we had a bit of a larger table in that breakfast nook space (and with lower legs added it would make a great kid’s art/play table too!). Hope you enjoyed seeing the transformation—it was fun for us to watch it all come together too! xo. Laura