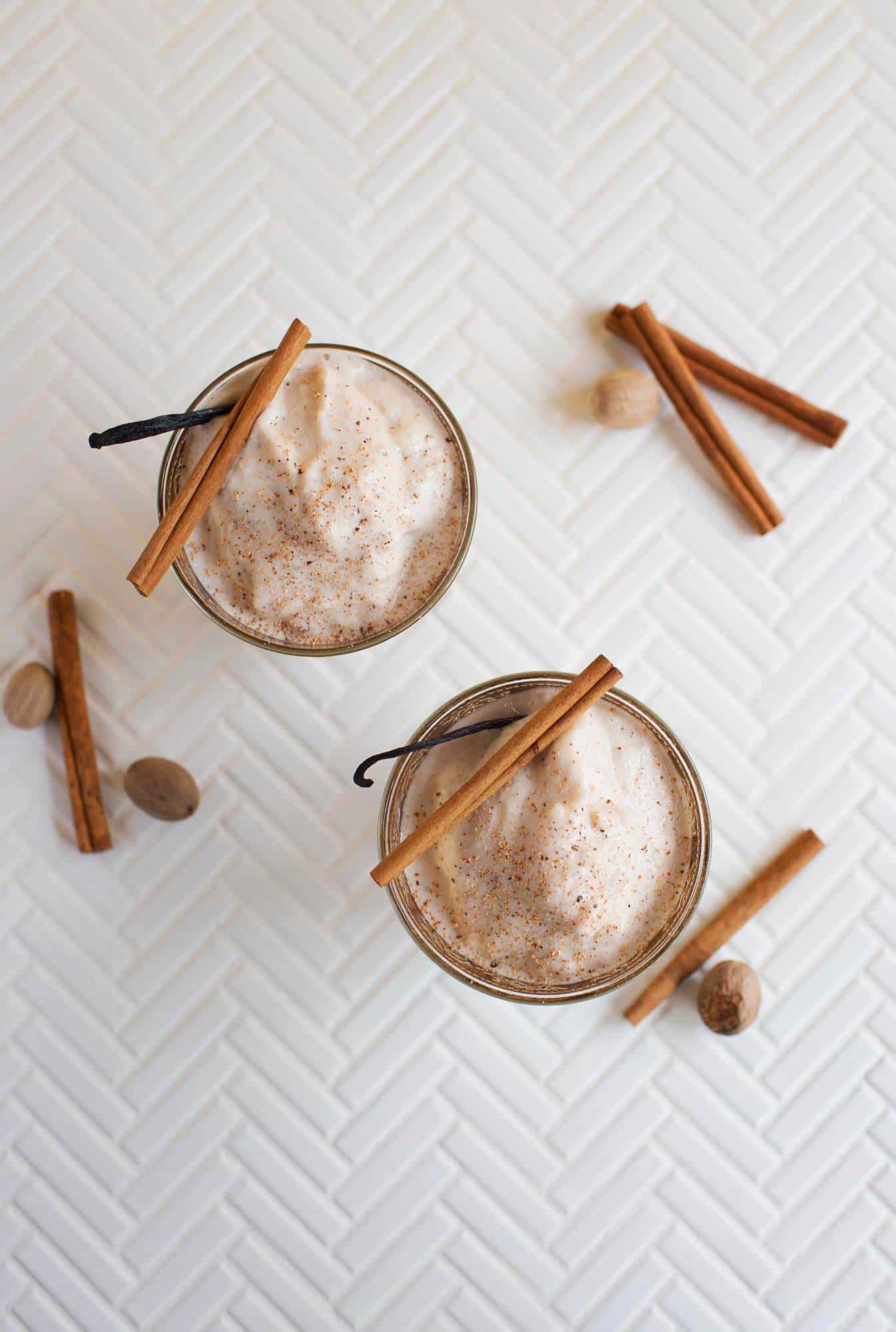 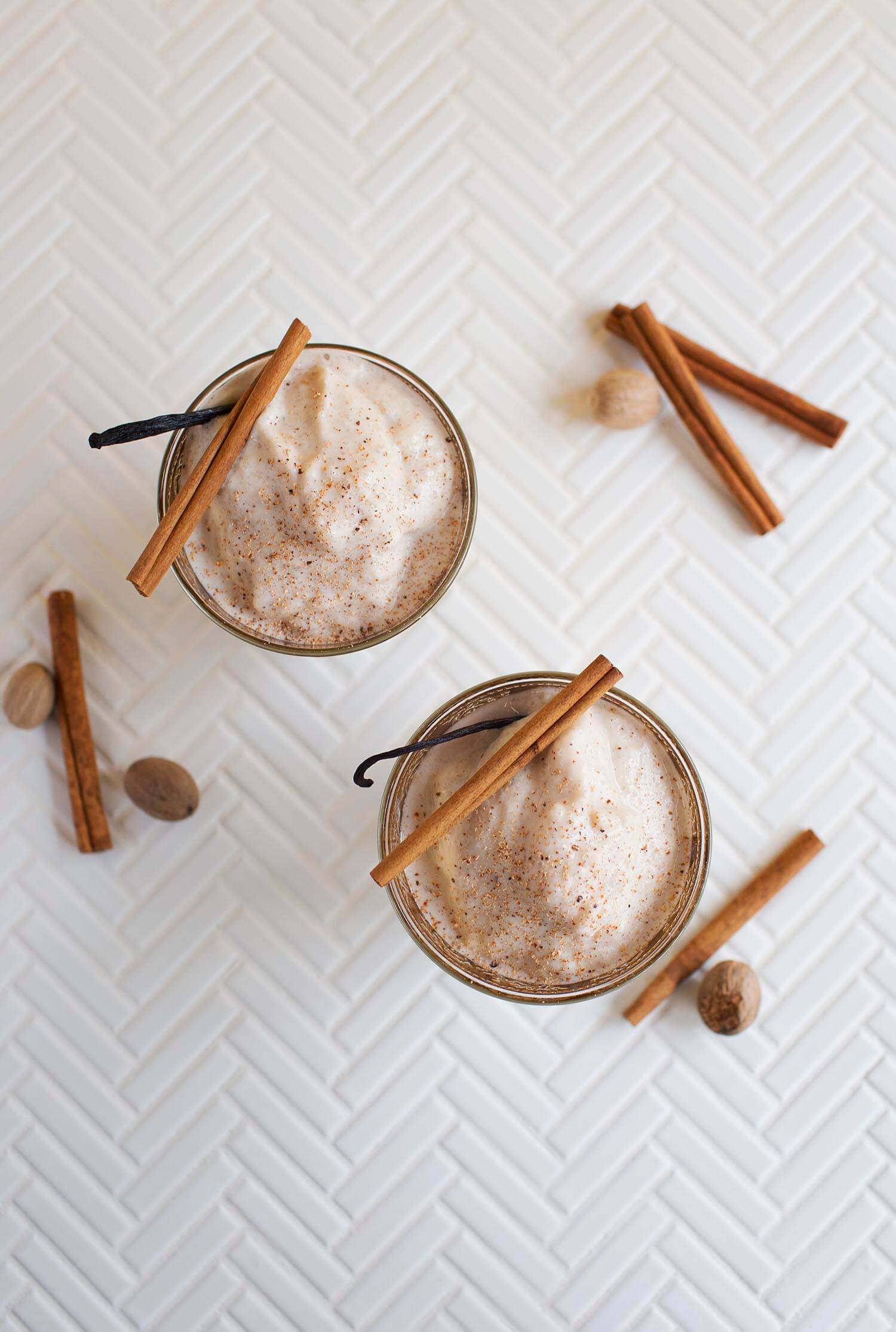 If you’ve never had or at least heard of a bushwacker before, then you probably read the title of this post and thought, “What the wa???” while raising your eyebrows as high as they will go. I know. It’s a weird name.

The first time I ever had one was in Nashville with my then boyfriend, now husband, Trey. He had lived in Nashville and told me that bushwackers were all the rave.

Although I was half sure that he was just telling me that so that I’d order one, and then look like a total dork because it wasn’t really a thing. I was wrong, and it was delicious! 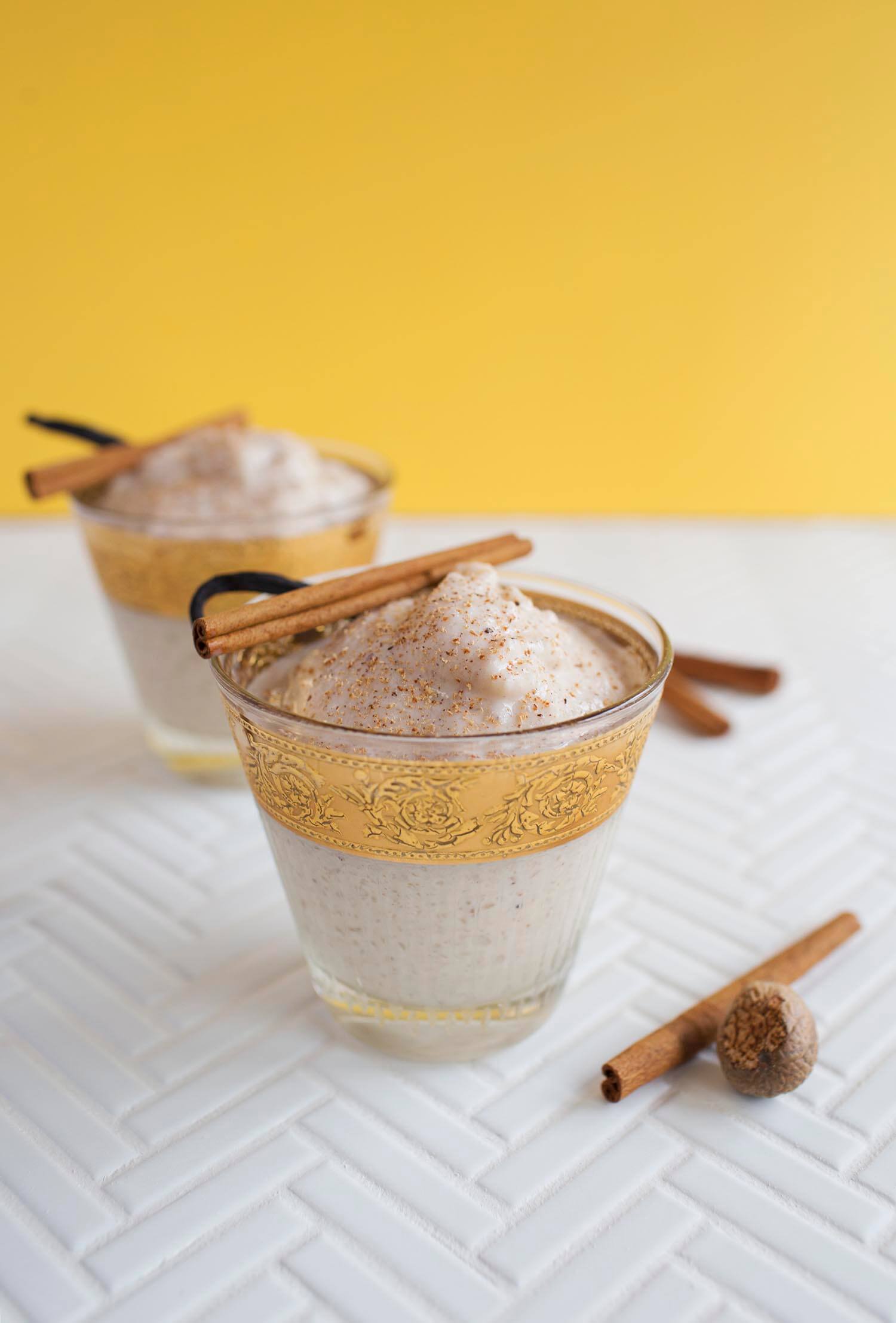 Most bushwackers that I’ve seen tend to boast more tropical flavors with ingredients like cream of coconut. This version is an easy-to-make-at-home winter variation with some of my favorite spices: cinnamon and nutmeg.

Does it make me totally basic to say that some of my favorite spices are cinnamon and nutmeg? 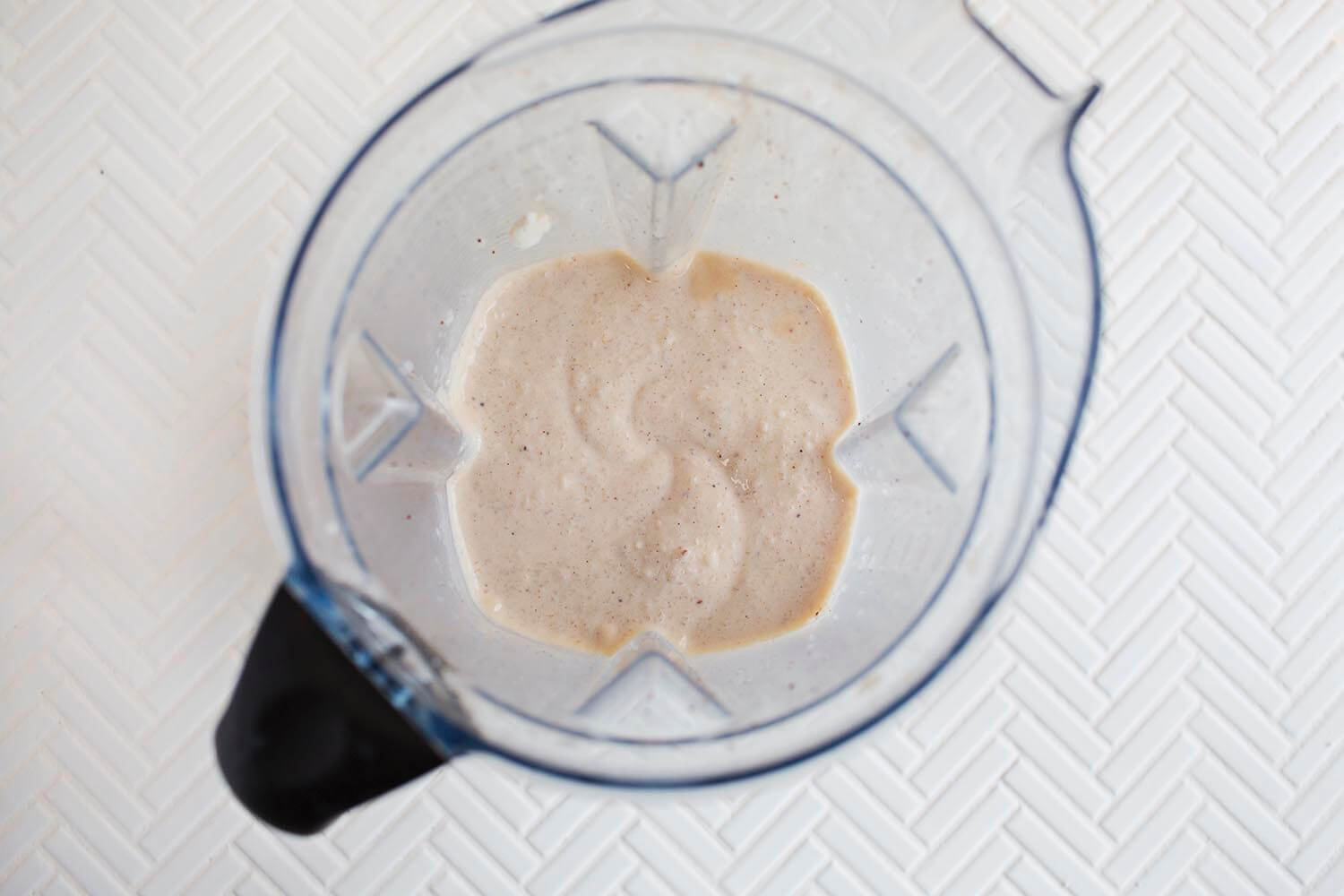 Combine all the ingredients and blend together until smooth. Pour into two small glasses and garnish with a vanilla bean (cut in half), a cinnamon stick, and another grating of fresh nutmeg. Or any combination of those. 🙂 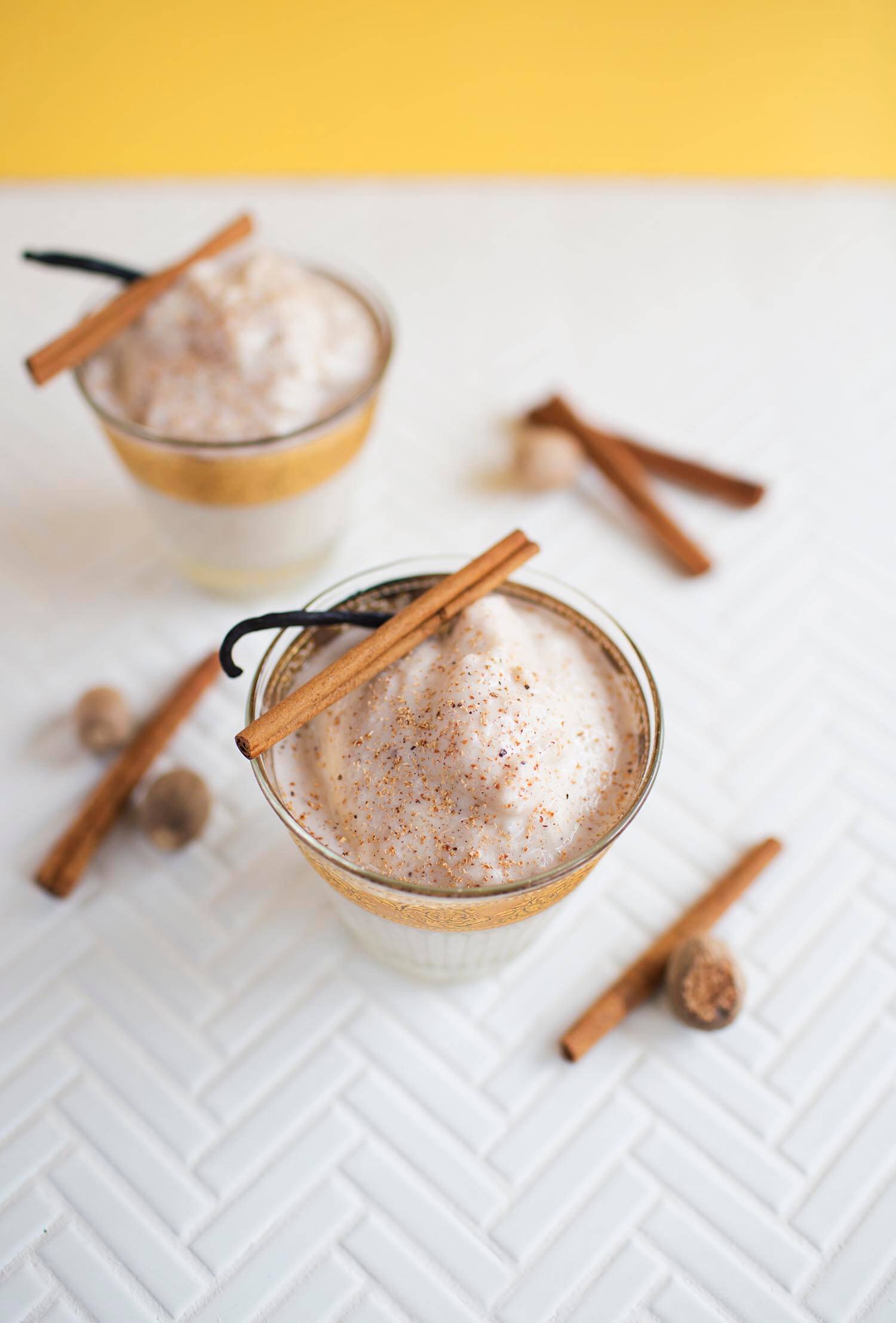 I know these servings looks small, but this is such a decadent and delicious drink that I personally love this small size. You could certainly serve the above as one big drink if you wanted. I won’t tell. One quick note:

-I used Rhum Barbancourt (15 yr) for the rum in this as that’s a rum we usually (at least lately) have at our house. It’s a Haitian rum, so it’s got some, well, funk to it (in a good way). So I think it goes well with the sweetness of this drink.

But if you prefer to use a sweeter rum, as those tend to be what I like to sip on (and you can’t just buy 1.5 oz for this drink), then might I recommend Ron Zacapa, Zaya, or Diplomatico.

I am not as familiar with vodka I always have at least one at home since it’s what I usually buy to make Moscow Mules, which is still a favorite. 🙂

Love this cocktail? Check out The Best Martini Recipes and 40 Fun Cocktails to Make at Home for more!

END_OF_DOCUMENT_TOKEN_TO_BE_REPLACED

Mmm, sounds yum!! So a bushwacker is basically a rum and vodka smoothie 😉 brilliant idea!

‘What the wa?’ was my exact reaction to reading the title! It looks and sounds delicious though, its something that’ll definitely warm you up in the cold winter months!

This looks so yummy http://www.likehanna.com

can you be more specific on the quantity of “4 scoops” of ice cream?

When I was in Nashville, we fell in love with the bushwackers from 3 Crow Bar. We make our own version with chocolate frosties from Wendys! Can’t wait to try this version 😀

I’ve never heard of a bushwacker, but it sounds GOOD. Saving this receipt fo sho.
www.wonderlandsam.com

What a wacky name for sure! Thank you for teaching me something new today.